Presented in pixel art and set in a future post-apocalyptic setting, Convoy is a squad based tactical roguelike-like in its core. You travel with your combat vehicles and convoy across a wasteland to find parts needed to repair your broken spaceship. During your journey you will encounter strangers in randomized scenarios by picking up radio signals.

Depending on the choices you make, signals can either lead to tactical combat, text based dialogue or chance based role-play. Whatever choice you make, you need to keep your convoy and its cargo safe from raiders, privateers and other enemies. Keep upgrading your vehicles, as death is permanent in Convoy.

In this update, we've added more abilities, dialogue, and improved gameplay feedback by adding a range indicator to units. 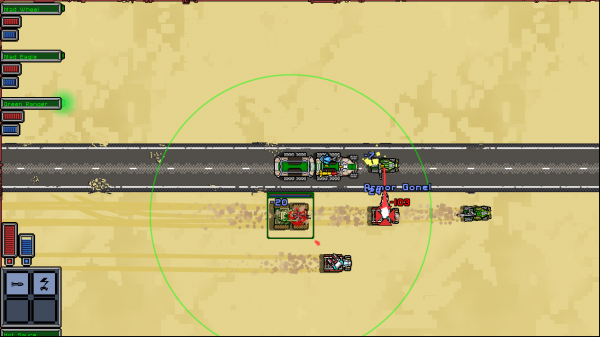 We're always looking for more feedback, so if you haven't got the alpha yet, send us a message and you'll get a key!

We've made a short video detailing the new map functionality implemented in Alpha 0.4!

The first batch of invites has been sent. Now where can you post feedback?

Yes, for real this time! A bit later than “soon”, but still… It’s here now!

Just a small announcement, we apologise for being so quiet the last few weeks. We’ve been working very hard to make it to the close alpha stage and...

This version contains two new MCVs and has an updated sprite for the Carrier Tank.

This version has updated sprites for the Landrover.

how can i get this game?

Will u make maybe convoy 2 cause i think this would be one of the best.And if u make plz create a longer story, u can finish this game in least half hour.Good luck in your future :D.

This game is really cool, and the concept of it!!!

my question though is..... after you finalize and polish this game, will you allow the modding community to take part of it as well?

But, I think we need some way to scrap all the junk we collect, as it is quite hard to save up a supply of parts (for me at least!)

Ok,
I like the combat in this game,it's make a lots of fun (but wehn there are 3 Cars with lasers then you are ******) But the problem is.. you can just drive to the exit and than..YOU COMLETED THE GAME..Why you dont make thinks like outposts or a Wall and you have to Collect TNT to destroy it?
(Sry for bad english I'm german)

Hey, thanks for the feedback!

Yeah, the "just drive to the end and win" is something we're still working on. We're looking at making it more so you have a "mission" first where you need to find several parts for your spacecraft before you can leave the planet. To get the last part you will need to defeat a boss.

BTW, the boss is in already with some basic funtionality. We're working on improving the AI and giving him some more special abilities.

How is that going guys? It's has been more than 2 months since your last post. Something bad happened?

Can someone make a game like "Jet Set Radio Future" ?
<3