Straight out of the gate, Celsius Heroes manages to alleviate many of our gripes with mobile gaming by presenting players with a strong, choice-driven narrative and by allowing accounts to be cross-compatible across iOS, Android and Facebook versions of the game. It’s not without fault however, and those who despise freemium titles may hit the skip button when they see limited inventory space, randomly drawn items and an energy system in place to tease real-life currency from its players. This would be a mistake however, because the game excels in all the areas it sets out to impress us with.

Graphically the title uses high-quality 2D art assets with a distinctly western feel to them, painted characters have the feel of the artwork found in ‘Dungeons and Dragons’ source books or on ‘Magic: The Gathering’ cards. Every asset of this type is crisp, drawn in a cohesive style and beautiful to look at. The games dungeons are presented in 3D with a matching texture scheme that makes it feel like you’re exploring a painting, and whilst at first you’ll only tease your way through caves and sewer systems, the later game has some intricate locations to discover. Aspects of the games user interface are implemented well, especially on touch-screens and serve as being interesting in a design style without drawing attention away from the artwork the game wants you to pay attention to. Monster designs, like the dungeons, initially seem standard cliches but quickly develop in interesting directions.

Music is sparse in Celsius Heroes, used on the title screen and in battles. Everywhere is in the game the heavy lifting is done by the sound design and this is an excellent approach, lending each area you visit a unique voice that can feel creepy or tense. When battles do come the music serves to drive you into action, spurring the player on in just the right manner. Sound effects outside dungeons are limited to confirmation of actions, which allows the player to concentrate on the dialogue and descriptive text being passed out by the game on a regular basis. 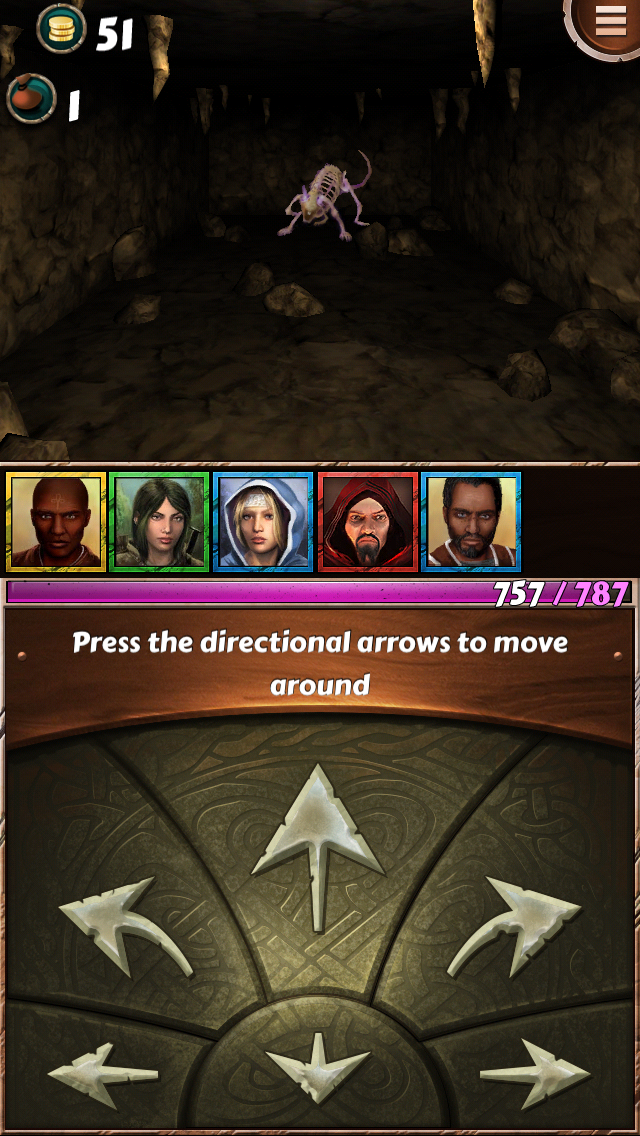 The games approach to a narrative is by far its biggest strength, mixing elements of traditional RPG video gaming with that of a choose-your-own adventure novel. It simulates the feel of a real-life pen and paper RPG brilliantly and in all the ways that matter without ever threatening to go off the rails. This works by allowing the active members of your party to each react to a situation presented to them in their own manner. These reactions are listed for the player who simply selects one and the narrative flows from that decision. Some actions are similar for multiple characters on some choices, but on others they vary wildly. This also allows for the party to develop their own individual sense of character, with the saintly Richard acting as the moral high and self indulged Uscule talking on the ‘arsehole’ route. These positions can change however, and you certainly don’t want to trust all your decisions to one character. There are some big choices to be made here, and at the present time the game consists of a Prelude and Chapter 1 of what promises to be a narrative treat. 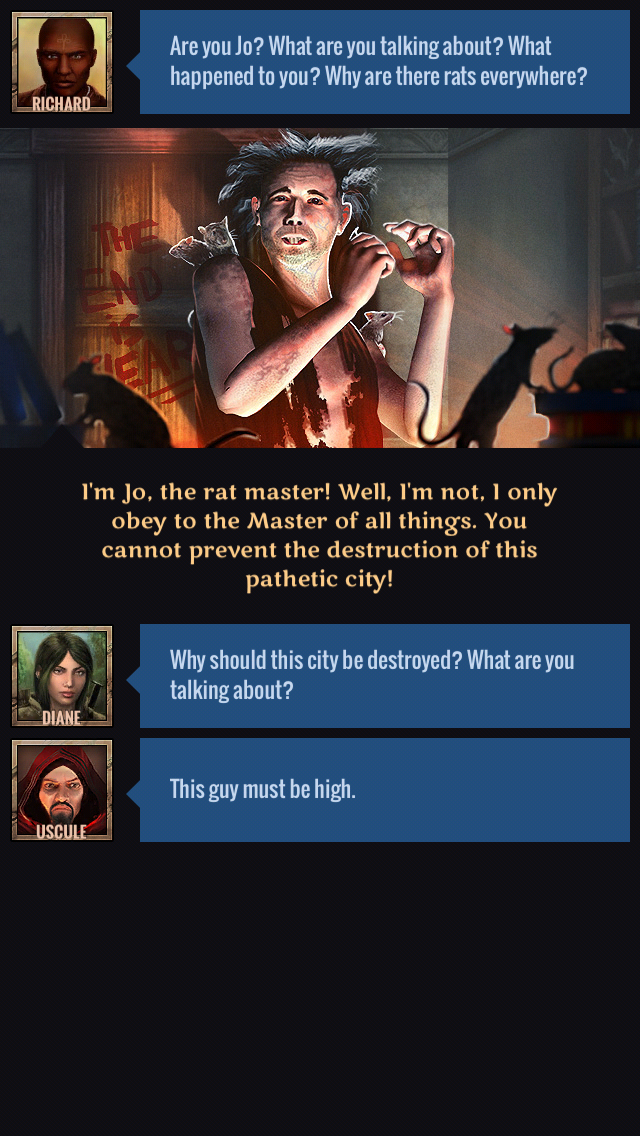 Gameplay is a neat collaboration of things you’ve seen done elsewhere, stripped down to their raw mechanics and rebuilt as a cohesive whole. Exploration feels like ‘Eye of the Beholder’, with you guiding your party through pre-designed campaign dungeons that contain all manner of paths, monsters, switches and locked doors. The dungeon design on display here shows a lot of variety and ranges to small, intricate chambers to larger labyrinths that will test a player’s metal. Control of this is given to the lower half of the screen, where directional buttons that work brilliantly are stationed. In addition to the usual four directions, strafing and backpedaling are also included to allow for navigation to feel like a breeze. Tapping the screen opens doors, flicks switches and other small interactions, and persistent items between dungeons means that finding a locked door on one level and a key on another might reveal previously hidden treasure when revisiting a location. Combat uses a match-3 mechanic that feels a little like ‘Terra Battle’ in its implementation. Elemental gems are presented on a 6×5 grid that feels small at first for a match-3 but quickly exceeds expectations when you realize that moving one gem shifts others, allowing for multiple match-ups in one move that keeps everything flowing nicely. Gems match characters, who then attack in a manner similar to ‘Puzzles and Dragons’ but unlike that game this isn’t a collectathon of every random monster to fuse and evolve your heroes. Instead you collect gold and experience, alongside the odd loot drop (rarer than you’d imagine!) and head back to the city to level your characters and alter their equipment. A fusion system exists to upgrade weapons and armour, but it’s in no way as convoluted as those seen in other games. The city is the games central hub and is the only location where you can do everything outside of combat. Visit the training hall, the forge, a tavern, guild, etc. It’s not the only location you’ll visit however, and as you start to explore the world begins to open up dramatically. Shortly after the prologue you’ll take your first steps out onto the world map and start moving toward a new location with its own features, quests and sub-quests to undertake. New characters can be unlocked through story events and regular special dungeons appear throughout the week at limited times to allow for challenges and loot-grabbing expeditions. There is an energy system keeping you tethered however, with any expedition having a cost and your action points regenerating slowly over time. In a perfect world this feature would be ‘pay once to remove’ and people could lay into the game to their hearts content, but as it stands it serves as a means to slow progress and prevent people finishing Chapter 1 before Chapter 2 is ready to launch. An understandable, but annoying evil. Social links with friends on Facebook can alleviate this somewhat, with them able to send you additional action points, keys and cash as intervals. 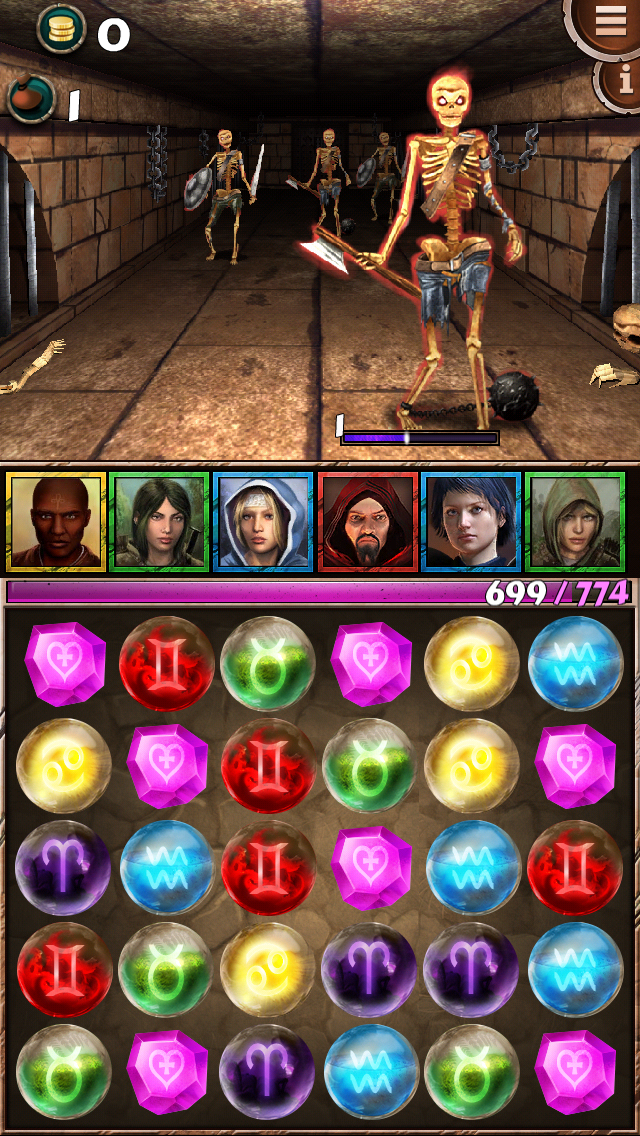 The layout of the screen feels just right.

Overall this is a wonderful game and its dedication to give us a whole world rather than a hub menu and an endless run of dungeons should be recognized. This world has history, religion and a depth to it that makes exploring a pleasure and keeps the story feeling like the best of interactive fantasy fiction rather than a thin veil on another match-3 title. So far the game has been playable without the need to invest in premium currency, with just enough rewarded as a daily bonus to allow players to unlock new slots in their initially small inventory, but I wouldn’t advise wasting any on reviving in dungeons as its touch-and-go in its rarity and each space counts. The random nature of chests, which when found can be opened to reveal mystery items is also a strange addition when an in-game shop would make more logical sense for the world that’s been built and with loot dropping in dungeons many will simply ignore this feature until the later game. I’d like to give this game a 5 based on its story alone, but have begrudgingly relegated that to a 4 due to the nature of the freemium elements. This is a title that I’d have happily purchased outright and invested in a season pass for later content on.

Pathfinder: Wrath of the Righteous Party Based