*Update 23.09.2014
You know how it often goes in game development: the game needs more time. But you can now make a more precise assessment of the development since i started streaming my Work on twitch here. Do not expect me to bee the most entertaining Person to be. You get a unfiltered look at my work with the good the and bad.
Also here a pic of the strat map for the 1% who can afford the deferred lighting renderer. 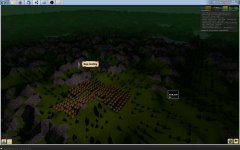 *Update 27.02.2014
I m almost done with the performance optimization. But i did start working on the simulation aspect of the game and i m making probably a mistake by showing you this since the UI and all the Industry´s are not final.
In the moment 1 Year takes on the fastest speed 1 min. After I guessed all the data that i need per Town i could Simulate 9k-13k Towns per minute without any frame drops since it runs on its own Thread.
My current goal is to get a playable version ready in the summer and than let someone test it. I Personally do not like the idea of selling the game too soon with early access but i might not have a good other choice.


*Update 22.09.2013
Since Crowdfunding did not work the jobcenter wants me to find a Part time job. I still keep my old milestones even if thats probaly not realy realistic. My guess is that the first version is in the end of 2014 available.

The world is defined by a grid in which you are allowed to build at one Sector (128x128x128 blocks) at one time. Every can consist out of multiple Sectors. The exploration, fighting, and expansion takes place on the Grid Layer. The shape of the whole world is defined by the type of Apocalypse that you have choosen before the start of the game.

The Game is using Unity 4, it will run on Windows, Linux and Mac.

Thanks for voting and helping Bricktopolis on it's quest to become the 2022 Indie of the Year. You are now in with a chance to score some free games. Help this game secure more votes by embedding the widget (or link) we have included below on your favorite sites.

Bricktopolis is now on Greenlight

There is also a new trailer and you can see the game being developed on the twitch stream feel free to ask any question there.

Here is the greenlight page and here my twitch channel.

This trailer shows a bigger Town and the feature of the first world.

Just finished the new Trailer, for more gameplay check out my video blog.

will there be more cities then the one the player owns?

As many as you can handle ;)

I was going to say it was a minecraft clone.
but then I saw the preview video...

looks VERY nice, just do your best to not forget us low end PC users when you decide to go all-out on the effects.

the effects are all unity, it took me only a couple of days to add them.
And you can disable all of them. should you still have performance issues you simply turn the view range down than the game should run on most PC´s.

anyway i will spend the next month just improving the performance than i know more about the minimum hardware required.