Physics
Brick Inventions is a physics based strategy/building game made in Unity 5. Basically, you have a large variety of different blocks which you can place in the world to build almost everything you can imagine. The special feature of the game is that every single block has physics - everything you build can be destroyed.

Strategy
In the game, each player has a crown on a podium. If the crown falls to the ground, the player loses the game. To prevent this from happening, you have to build defenses and weapons out of blocks. This requires resources, which you get by transporting resource-blocks from a producer to a warehouse. Each producer and warehouse has a special object on a podium (like the crown). If such an object falls to the ground, the producer/warehouse loses all of its upgrades.

Inventions
Since everything is created out of blocks, it may take long to build things that are more complex. The Inventor-mode enables you to create your own inventions out of bricks, which you can save and then place in singleplayer-, multiplayer- and sandbox-games like any other block. Invent a new machine, more efficient weapon or more powerful defences - the better your ideas, the better are your chances of winning a multiplayer game or mastering a challenge in a singleplayer game.

Single & Multiplayer
Brick Inventions offers both a singleplayer- and a multiplayer-mode. The singleplayer-mode consists of different levels, each featuring a different kind of challenge. The multiplayer-mode enables you to play against players all over the world. In order to win a game you do not only need to have a good strategy, but also powerful inventions - defend your crown and shoot down those of your enemy.

Sandbox
In the sandbox mode you can build everything you want, without limits. Sandbox maps can be saved so you don't have to worry to lose anything you've created. There is also a multiplayer sandbox mode in which you to build and experiment together with your friends.

Hi everyone!
I'm happy to announce that Brick Inventions has been released on Steam! 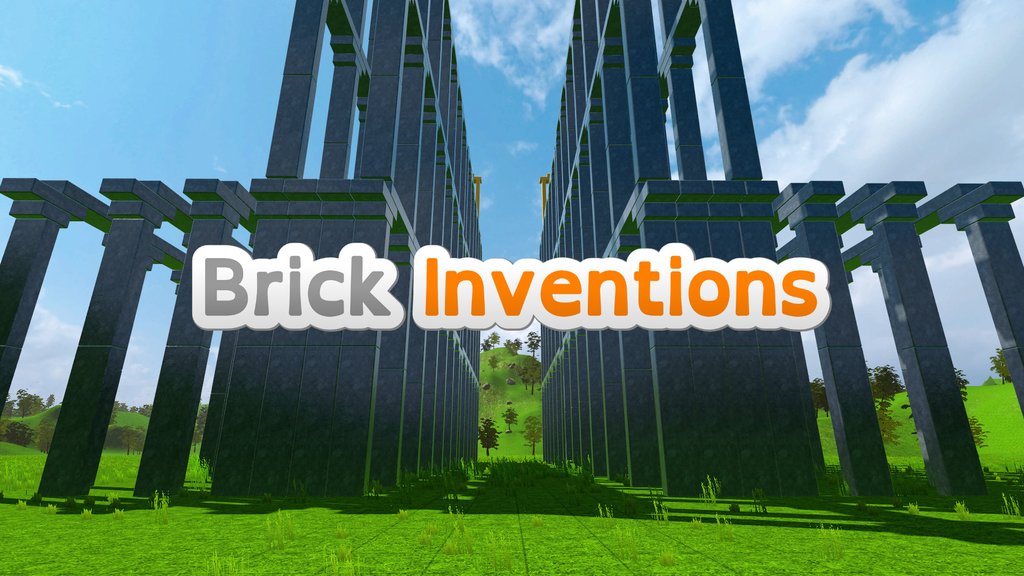 It's been a really long time since I started to work on the game (over two and a half years) and I've received valuable feedback from the beginning here on IndieDB so I would like to thank everybody who has followed the project. 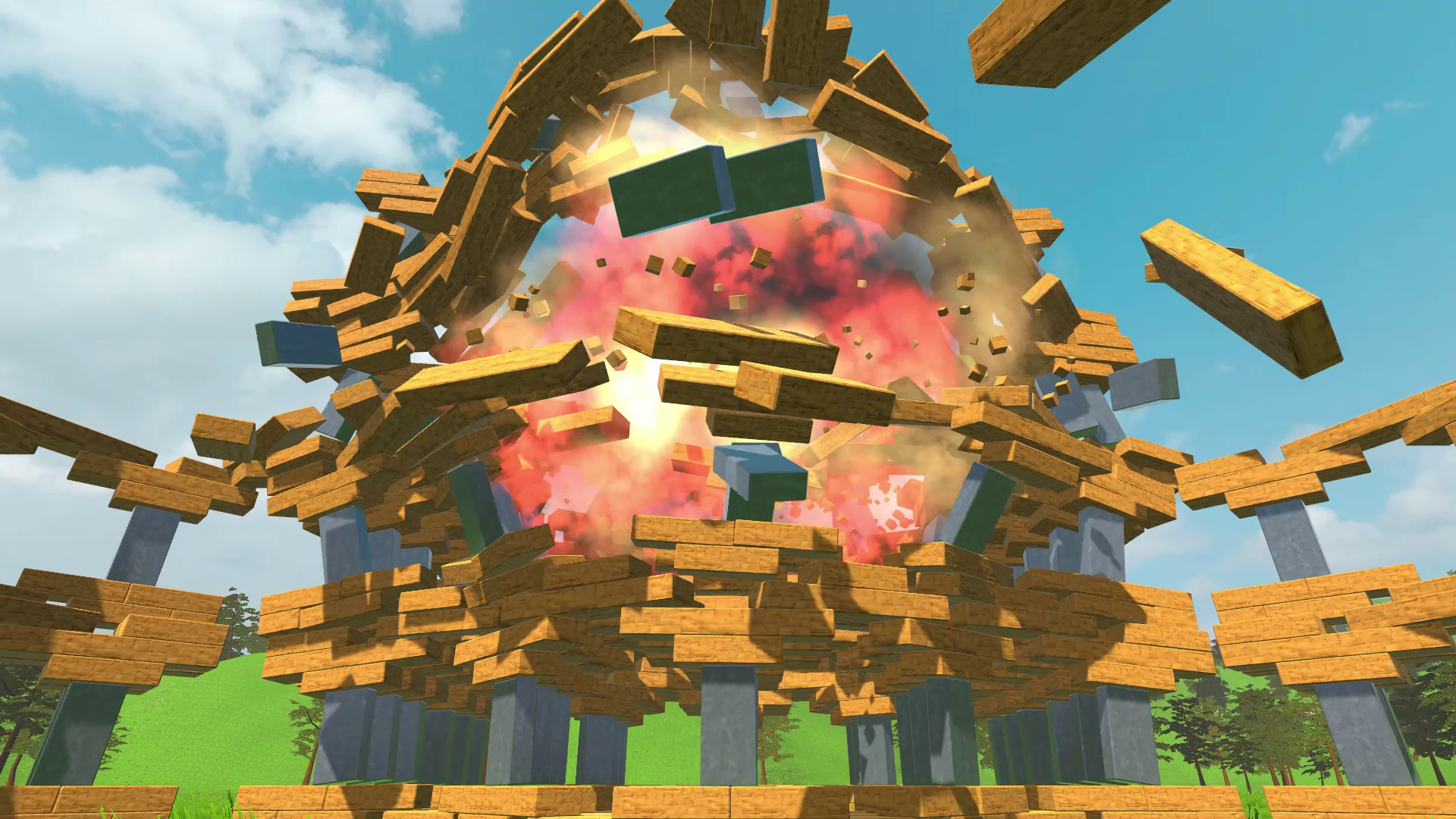 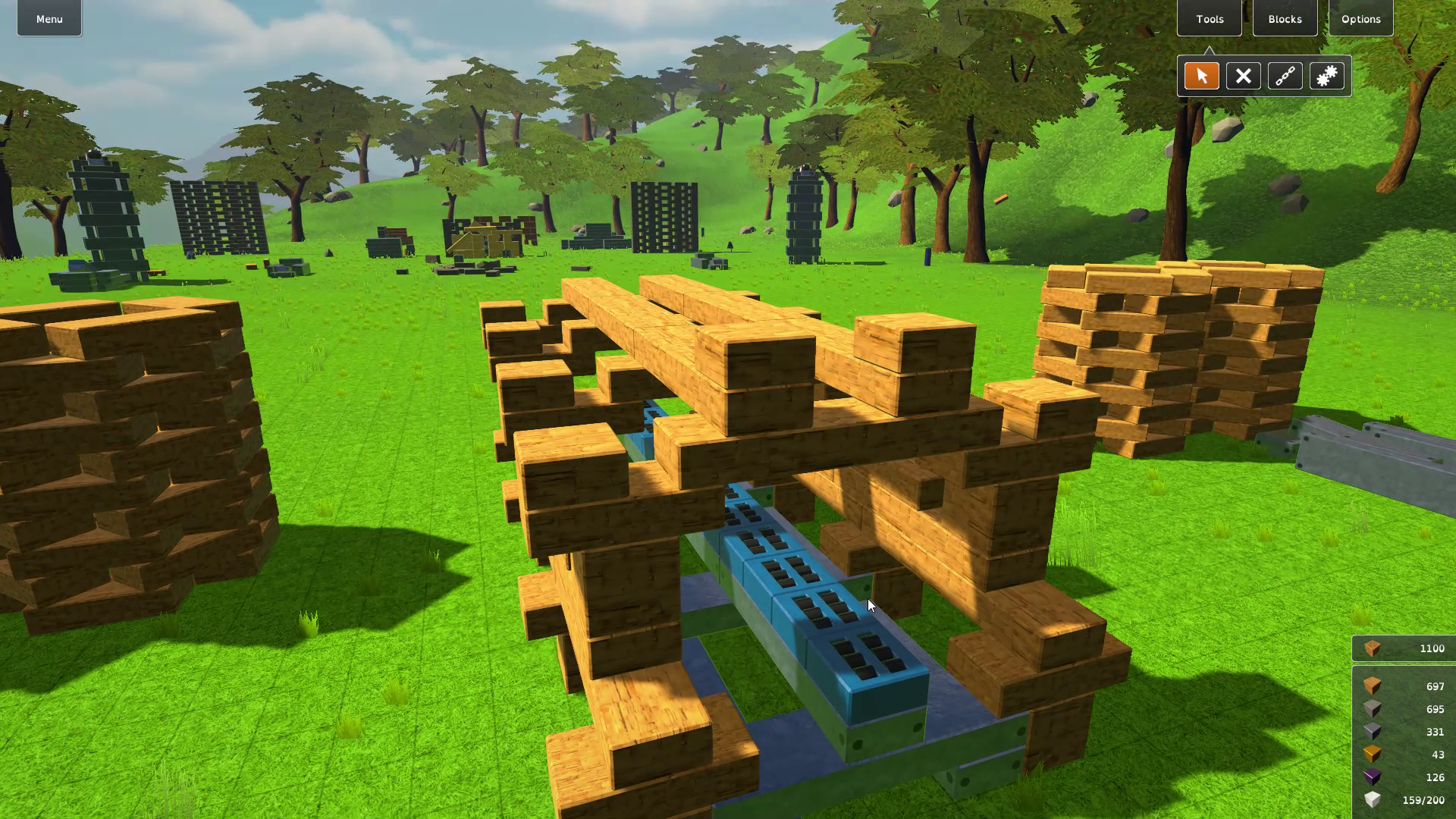 Now that the game is out, I will to continue to update the game with new features. Besides smaller updates that contain fixes and improvements, I'm planning bigger feature updates from time to time as versions 1.1, 1.2,… which add several new things to the game.

At this point I want to point out that the following list is no complete roadmap and that there is no guarantee that all of the features will land in the game. It's more like a list of things which I'm currently thinking about and would like to see in the game at some point in the future.

More blocks
Brick Inventions is all about building something out of blocks so I want to add more blocks to broaden the range of things you can create in the game. I already have several ideas like a rubber ball or a rotation block that can be used to rotate things that are placed on it (the thought of automatic cannons that can be rotated sounds really fun).

New Singleplayer Levels
The singleplayer mode currently features a tutorial and 15 levels and I'm planning to add some more levels which will also feature new kinds of challenges that can be solved by using the new blocks.

Multiplayer
In its current state, the multiplayer mode (not including the multiplayer sandbox) has 2 maps and 2 game types which are 1 vs 1. I want to add a new 2 vs 2 mode (the network code already supports teams), which could be quite interesting as one player could be responsible for building defences while the other is attacking the enemies. Apart from that, I'm also thinking about a multiplayer “party mode” which has a selection of physics based mini games that you can play with your friends. 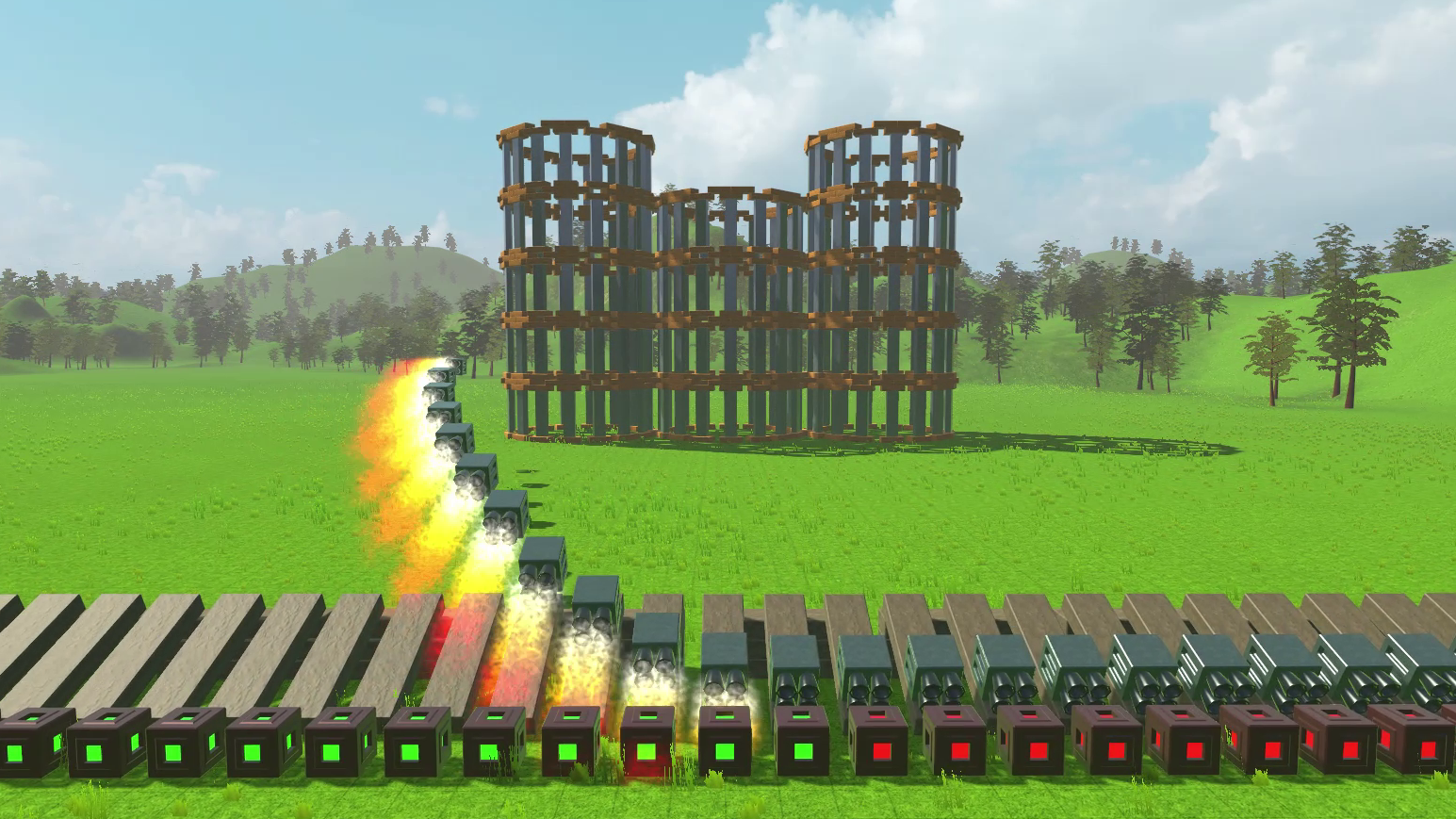 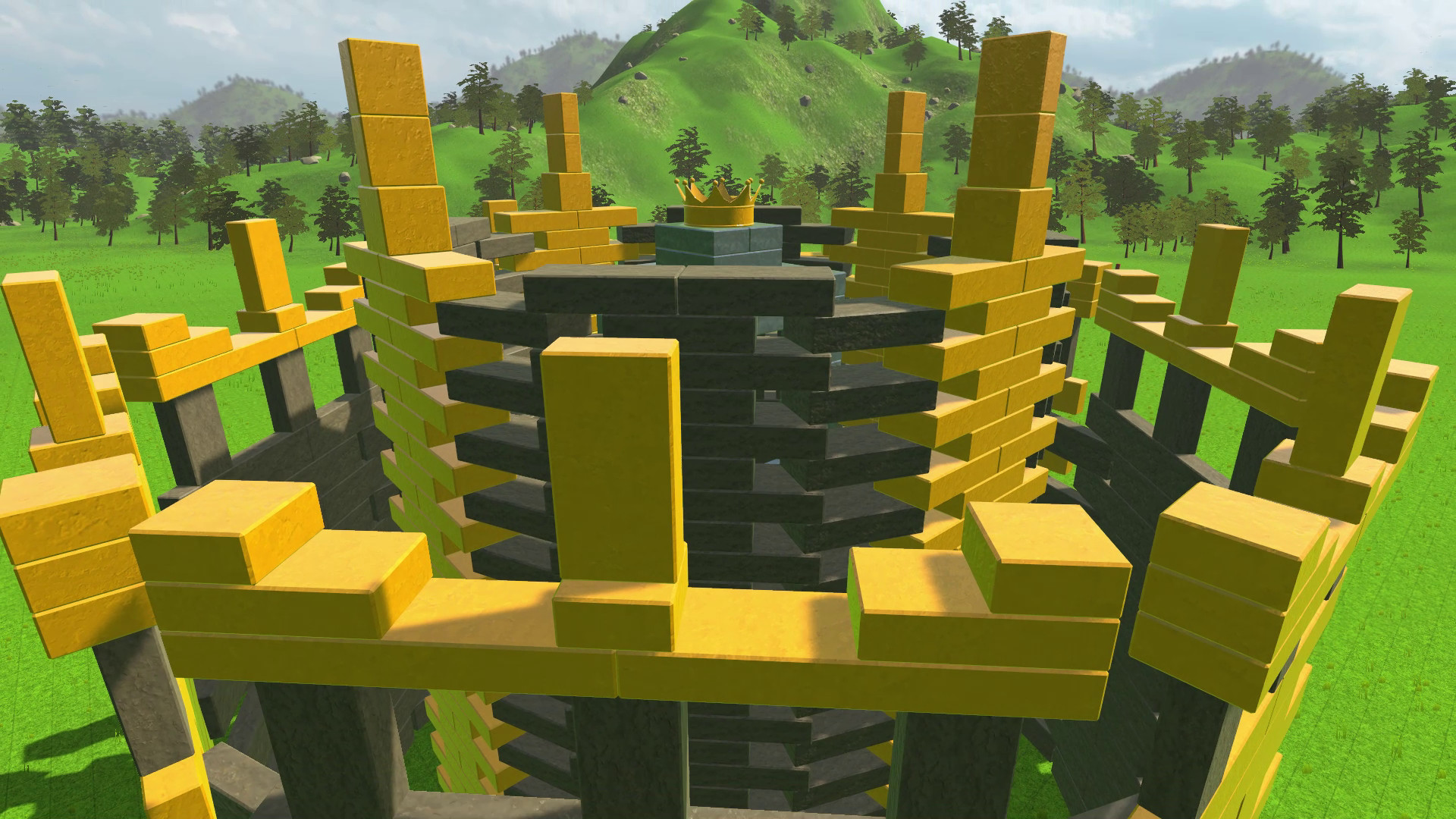 Steam Workshop & more
There are also several other things that I would like to implement after the release. First of all, I'm working on implementing the Steam Workshop after the release so that players can share their creations or maps more easily. I'm also thinking about a slow-motion function (destroying huge buildings in slow-motion just looks awesome) and a first person camera so you can walk around in your map.

Besides the things that I've mentioned above, I also want to implement ideas from the community so if you have any idea for a new block, mode or something else, let me know.

Since there are only few weeks left until release of Brick Inventions, it's time to start the beta.

In this post, I want to talk about the singleplayer mode of Brick Inventions which I've been working on during the past months. After the completion of...

Several months ago, Brick Inventions was updated to Unity 5. This enabled huge physics simulations with the power of PhysX3.3. Therefore, I have now created...

Download and play the demo version of Brick Inventions. (Note: This version was released in 2014 and doesn't represent the current state of the game).

Hi, if us need someone to translate the game to spanish, i will be so gratefull.
Anyway im posting about this game on my webpage.
Goodbye!

I'm working on several changes on the core system which will improve the gameplay (a new placement system and some other things I haven't talked about yet). Besides that, it seems as if Unity 5 will (finally) be released soon, which will give a huge performance boost and other improvements.
So to answer your question: there will be a new demo version after I completed the new systems and ported the game to Unity 5.

This game looks really good! Is this by any chance on / coming to Steam Early Access?

If the game makes it on Steam Greenlight, it will probably come to Early Access after I make sure that everything works and that the quality is good.

all games if sandbox like this (not to mention blockscape and starforge(but blockscape in particular)) stoped to update or did only minor update since the game came on steam. that is, less feature than promised and a game still in beta phase since month...

so id say, as your sandbox game seems very promising i hope what you wanted to do or promised to do at first will be done before you quite it or mass selling it on steam. :)

and will there be a fps view? like in minecraft? just to sneek around our building. i ve just imagined the possible danger parkour you could make with your game ^^

Quality has been very important for me since the beginning. Like you mentioned, I saw many indie games which had very interesting concepts but the quality of the games wasn't good in my opinion. That's why I waited over a year until I released a demo and I will stick to that in the future. The alpha demo far from being perfect and now, 6 months later, the game is much better than it was back then but that's okay for an alpha version.

I just noticed that the game got greenlit on Steam (if it's not just a bug as over 500 games got greenlit that day - I will probably wait a bit longer until I make an announcement) but that doesn't mean that I will just publish the game as it is now as it's not ready yet. I will continue to add content and improve the game until it reaches my expectations. That will take some more time but better to release it later than unfinished and full of bugs.

Regarding the fps view: That's something I get asked a lot recently. It's not in development at the moment and I want to distance the game from minecraft, etc. but if you guys want something like that, I could implement it in the sandbox mode (it wouldn't make much sense in singleplayer levels or multiplayer combats).

about the fps view i don't want a minecraft like fps view with interactions, mobs and all. just a simple fps view to move around, admire whats has been done from the inside and myabe do some parkour with traps and building falling while you have to survive from A to B. just as simple as that :)