Rotate the blocks to make horizontal or vertical rows, or 4 in a square. Beat your friends at the high score, and complete level after level. When the UFO shows up, wait for it to help you... or if you really can't stand the tension, tap it for a funny surprise.

but most of all: have FUN!

I made a game.. self-imposed deadline: 1 month

At the end of the year, one typically wonders:

'How will I ever escape this highly guarded castle with this beautiful Damsel in Distress,
while being chained up to a wall and bleeding like a freshly shot pig?'

As it turned out, the Damsel was kind enough to steal the dungeon key, gather some magic herbs for the flesh wound, and knocked out some Ork guard while she was at it, which - I must admit - facilitated our escape greatly.
Some other Orks met their swift demise, a significant amount of soup cans got thrown over, and a sudden shortage of security personnel developed in the facilities, much to our joyful surprise.

So off we went: Castle prisoners no more!

You can imagine the relief when I finally got back at house ElfenTroll, welcomed by numerous grandchildren and my favorite pet dragon. Heartwarming, I can assure you!
As a result, I vowed to give back to Karma in the Big Hall that night, and put myself to a noble task to celebrate the event:
What if I could hone my programmer skills again, dig into some artwork and make a game in one month?
Many grandchildren rejoiced, as I had silently hoped.

As soon as the thought kicked in, I could not resist any longer.
Moreover, the kids would not accept any procrastinating, which left me no way to back out of my promise.
While the house relived, fresh soup was being prepared and my good old pipe felt like a long lost friend, I started to ponder.

I needed some subject, Fast! Something that could be done in one month.

Upsetting some local youngster by not making my self-imposed deadline was not an option.
Now that's not easy, starting from scratch, being an old ironmonger who has been rusting away in a dungeon for over a year.

Wise as she is, the aforementioned Damsel (now far less in distress and kindly offering soup) proposed I'd start with something cute and easy.
The warrior in me objected at first, but well... I had seen enough pointy objects for a while, and settled for a much gentler idea: a puzzle game!
The grandchildren are growing up, and we might as well sharpen their wits, so they can learn to recognize the dangers of this realm and stay out of Ork hands.

As a title, I needed something catchy. Pumping the brain - in a good way - sounded like a good plan.
After all, in our neighborhood, a large pumpkin-sized head is seen as a sign of great beauty, and I noticed some of these kids were well underway developing this popular family trait.

A simple logo was assembled. I must admit it is kind of corny and literal, but the kids liked it, so that was that. 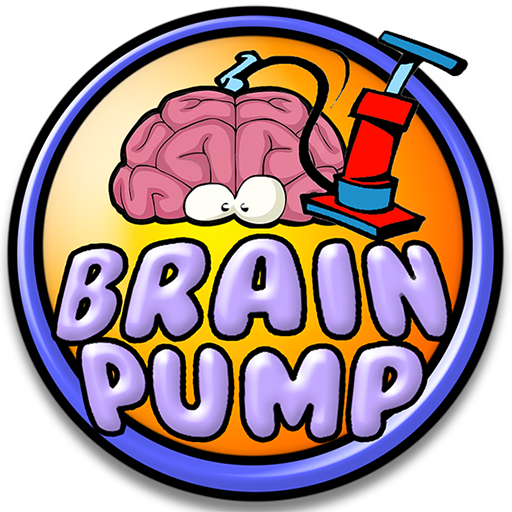 For gameplay, I observed their natural skills and noticed they were particularly good at twisting things around. Aligning cake so they get the largest piece is something at which my grandchildren excel, and I can't blame them: when haggling for food with the Orks, I did exactly the same.

To make a long story short, I had great fun making this game and just made my deadline.
I can see some kids already developing almost magical swiftness shuffling and twisting things around.
That's just great.. sooner or later, their head will be as big as mine, so my harness and helmet will not go to waste when they inherit my gear.

Now that this game is done, I can peacefully go back to my old hobby of slaying dragons and raising their spawn as pets.
Maybe next time I'll make a space shooter, because a man cannot sit around and just wait for scientific progress to kick in all by itself, after all! That little UFO already makes a guest appearance and has a little relief bonus game in store for you, but don't tell the kids yet, they will need to discover it themselves.

Without further ado, have a look at this game: born from captivity, but now out in the open.
As seems to be the modern habit, I stuffed some advertisements in there, negotiated back and forth with some slick salesmen to keep it kid-friendly,
now providing bread and more soup to my offspring, hoping you do not mind too much.

A fun puzzle game, sharpening your brain for recognition and strategy, while having fun!