The Village
Unlike many games in this genre, you do not simply do battle after battle in a linear fashion and then "beat" the game. Instead, each siege is preceded by a visit to your village where you can take quests, buy ammo, play minigames, as well as refine or sell resources to attain more gold. You can spend upgrade points on powerful one-shot spells or permanent passive upgrades! You then select what size of siege you want to engage in, and finally what level you take on is randomly chosen from there.

Seasons
What season it is in-game is dependent on what day of the week it is in real life. Although mostly cosmetic, each season imparts a game-wide bonus that may affect how you play sieges that day. During Summer you get 25% more time to complete all sieges before being driven off. In Winter, critical hits form a stacking debuff on building blocks called Ice Crystals, which enhances the chance they'll be critically hit further. The idea of having seasons is fun, and something we look forward to potentially expanding in free updates.

Welcoming You Back
Given its short burst arcade nature, Blasted Fortress knows and respects when you're taking a break. Your farm generates gold while you're away as long as you have fertilizer to feed it, and often coming back from a long hiatus can mean the tribe will present you with a welcome-back gift. Then again, maybe you'll learn of things gone horribly awry in your absence that need correcting!

The Editor
Of course, a game where you destroy bulky block-based buildings wouldn't feel right if there weren't an editor, so built into the game you can create, name, and save your own buildings to randomly appear in the siege rotation. They're saved as super lightweight text files that are easily sent to your friends if desired.

The Community
Many games are rigid in their design. Blasted Fortress was built to be open-ended and accepting of new ideas. Although there is an ultimate goal to vault as much gold as you can, there is no real ending. We want to take that opportunity to allow our players to make suggestions of what we can add after launch. We take suggestions seriously, and act swiftly if they're good ones. Any and all content updates or overhauls done to the game will be patched in for free, a similar philosophy to games such as Nation Red or Terraria.

If you've seen the header image on our IndieDB page recently, you'll have noticed something odd; features from our game, Blasted Fortress, inhabiting a strange new art style.

Early in the game's history, the art style was in constant fluctuation. When we settled on a style for the release version, it was a look that had been iterated on over the course of a year... this proved problematic, as the game was now a mixture of old and new art assets.

The first impressions people got just by looking at the screenshots made them timid about going any further. Most testers were surprised that under the uneven veneer, the gameplay itself was a lot of fun. It was clear that the art style was cramping our bottom line. And what would we do about it? Touch up the art? Slap special shader effects on everything?

Why not remake every single art asset in the game?

It was the craziest, most labor-intensive idea of them all, but we knew it would also be the best one for players. In early January, we started creating 2D sprite assets that not only better fit the gameplay, as it is restricted to 2 dimensions to begin with, but that would be faster to animate and have more character. And so began Update 1.1, The Day The World Changed. 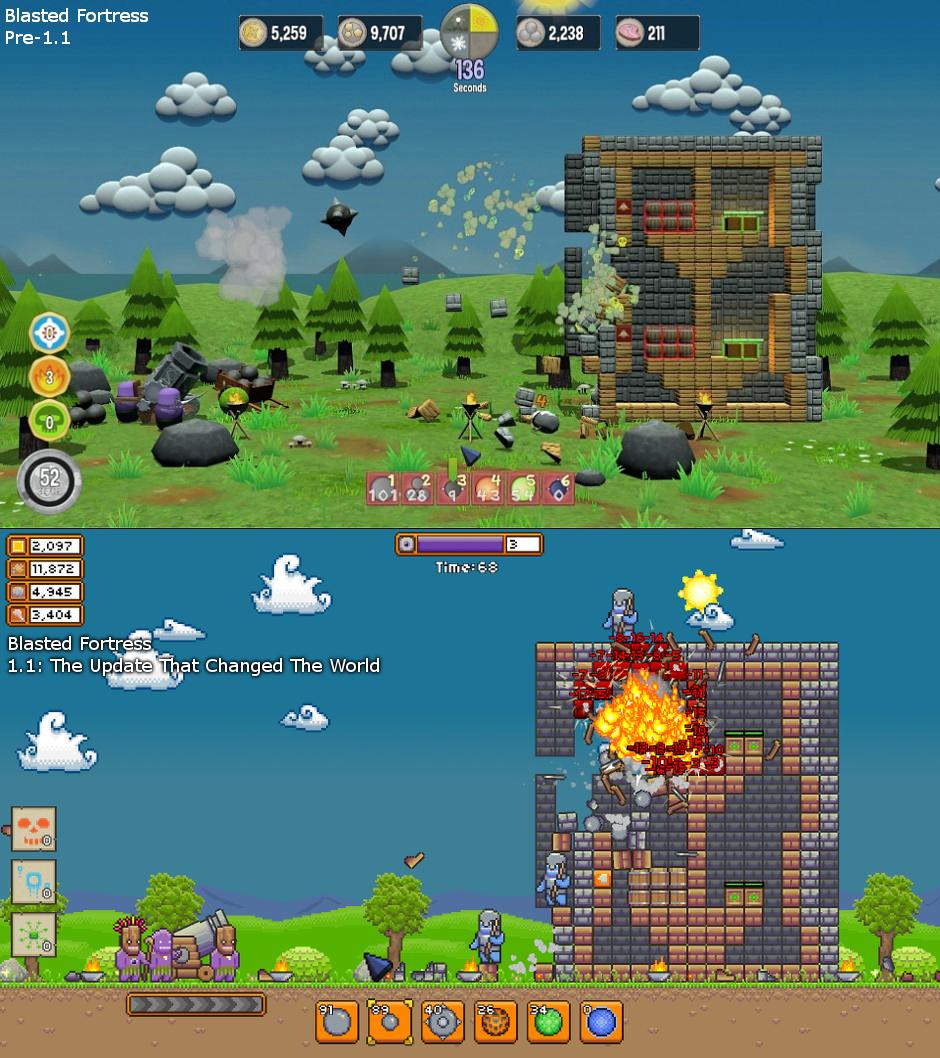 Here are all of the current patch notes for the 1.1 update (coming soon):

We'll almost certainly be doing more work in the next week or two before 1.1 goes live, but this is just a taste of what's to come. The update is very close to finished, and as always we'll be overjoyed to get some feedback for what we can do in future updates.

Yesterday Blasted Fortress was patched to 1.0.2. 1.0.1 was "skipped" due to issues getting the patch verified by Desura, but its changes are included...

No more mussin' and fussin', Blasted Fortress finally has a release date. We'll be out on Desura on October 31st, so let your trigger finger itch and...

Dawn of H'btakh : Get Lost and DIE Arcade