A casual shoot'em up game which focuses mostly on character progression. Bobby must protect his home part of the galaxy against an increasing amount of unfriendly asteroids and eventually to get to the source of the problem. The latter consists of a boss fight against the mighty Fluffopath, a fluffy confused alien with a psychotic personality.

Black Bobby The Hole | DevLog #2 – About, controls and how it’s different 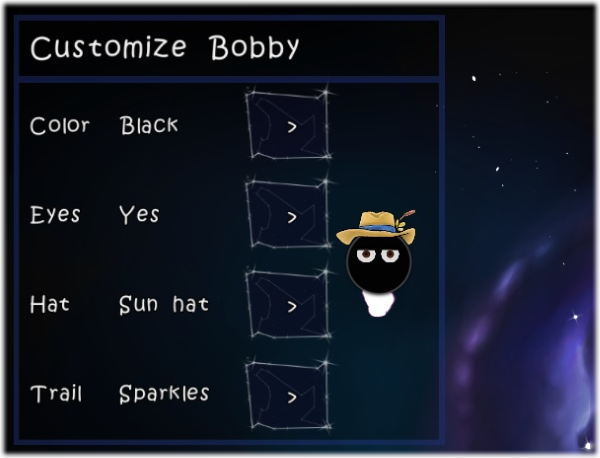 Black Bobby The Hole is an arcade game with modern cartoony graphics in which Bobby, the black hole, must defend his home and solve the mystery of the cursing entity.

Right now there is one type, and that is an extremely fast movement towards the mouse cursor. The main reason behind this is that the control should never hinder people. When that happens, it's a problem.

As the project advances if there will be a demand I will implement a slower, more smooth movement towards the cursor, perhaps controller support as well. And then we have the abilities which can be activated with keybinds.

A quick reminder about the first DevLog entry of this project: I saw a game, I liked it, made one of my own and started improving it. The result will be something so different than the initial game that people won't be able to compare.

The main character is Bobby, a friendly black hole on a mission to get rid of invading asteroids. In order to make him more human poor Bobby needed some eyes first. And that went to shit! I made the eyes separate, and then struggled to sync them. Meanwhile Bobby was making these retarded faces:

Pretty damn funny until I had to spend an hour getting them to sync properly, and another hour to implement the (now) primitive animations. More customizations included hats, skin color (yes, there is a pink here!) and trail that's left behind (kinda like an unicorn permanently farting). At least now has a face and a personality, be that retarded or not.

Black Bobby The Hole | DevLog #1 - First entry, how and why this project

An arcade game about a mentally disturbed black hole in search for the cursing entity which deeply bothered him. Inspired by a game, ended up making something...

A shoot'em up game without much of the shooting. Character progression, hats, curses and a crazy black hole!