Belladonna is a gothic adventure game, twisted and dark. Take the role of a corpse girl rising from the dead in an abandoned laboratory, and unravel the mysteries concerning your own death and reanimation. After the death of their young child, doctor Wolfram von Trauerschloss and his wife Belladonna are left to deal with the tragedy however they are able. The doctor launches into a dark obsession, devoting his life to the quest of conquering death. The madness spreads and Belladonna is soon dragged into the despair, but the tale takes surprising turns as the dead are brought back to life and the living are not to be trusted. 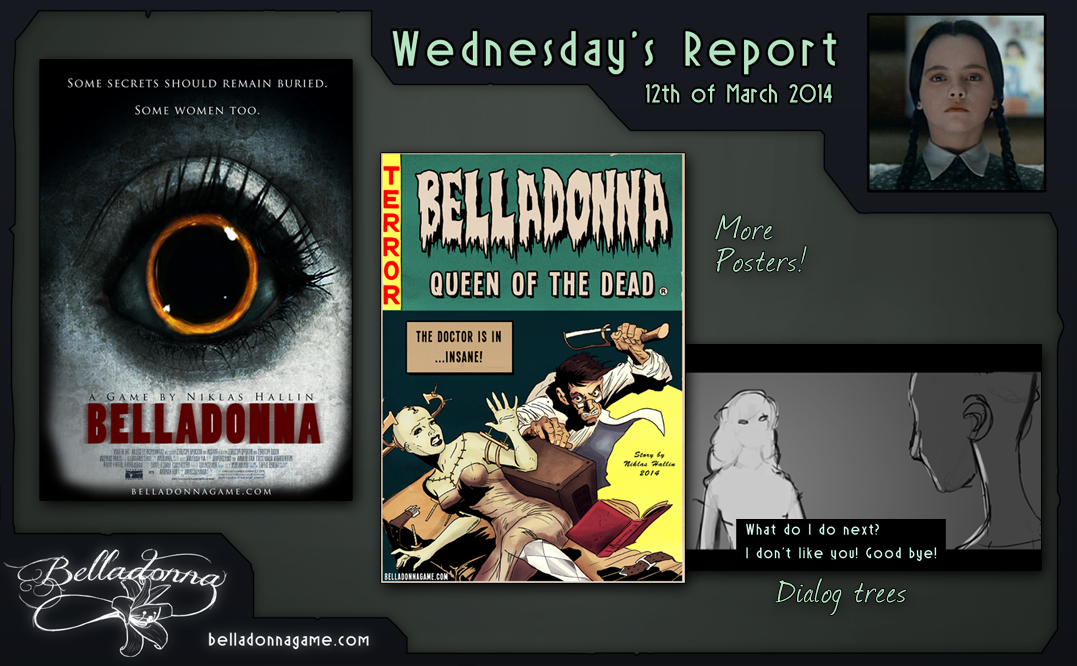 This week in Belladonna

The point of the 1930s Frankenstein poster I made was that it was a Frankenstein reference. But then I thought it would be cool to make a Belladonna poster in the style of the old Tales from the Crypt (and similar) horror comic covers. I’m continuing the tradition of making Belladonna posters in various horror styles, and I’m having a blast.

The Tales from the Crypt poster has nothing to do with the story of the game. These two characters never really meet like this, and though the doctor is indeed murderous he would never attack someone wielding a blade. He’s the kind of guy who silently poisons you.

Once I had already thrown all respect for the game’s story out the window, I figured I might as well keep going, and so I created the Modern Horror Movie poster. Making a movie poster today is fairly simple. Zoom in on a human eye, desaturate everything and overlay a lot of metal scratches and dirt layers. I created this poster in about 15 minuets.

Interestingly, and perhaps not so surprisingly at all, the Modern Horror poster – stooped in irony, tagline intentionally as lame as possible – got significantly more upvotes/likes/favourites online.

Belladonna is largely a point-n-click adventure game, but it will also feature a Mass Effect/Banner Saga style dialog tree. I have no art for the scene, and I have not written the lines for the dialog, but this week I started working on the technical aspects of connecting dialog options with the correct responses and so on.

Visionaire has a tool for this, and making the actual branching tree is very easy. The unexpected problems I am having is formatting the text properly and making it appear at specific positions on the screen. I have a designated area for dialog text, but right now the lines appear floating mid-air somewhere in the room.

I’ll look into this issue…

Full scale versions of the posters can be found on belladonnagame.com

I'm not really a good person

What are provocative games? Who do they provoke, and when are they offensive?

The making of the Living Room

The Living Room was created using a 3D render that was then painted over in 2D. This is a new method I'm trying out.

so i can't close the inventory at the beginning after reading the note on table.

It's so crazy and awesome!

Five Nights at The AGK Studio Rebranded Point and Click