Beast Hour is a dark 3rd person PvP game where you run, hunt and fight!

Play as Raiders – use parkour to explore a forbidden territory of an old haunted сity to find Arkana – unique fuel that powers up your abilities. Compete with other Raiders to get more Arkana to have a chance to stand up against Beasts – vicious predators serving the сity’s Keeper. You can escape or you can fight – the choice is yours.

Play as Beasts – hunt down your prey in the sacred сity of the Keeper. Prove yourself to be the most brutal and furious monster by protecting the divine Arkana from Raiders and kill other Beasts as there could be only one Alpha.

Use varied parkour moves and combos to overcome every obstacle on your way and dodge enemy attacks. Every piece of the сity is yours to explore.

No matter who you play as – Beasts or Raiders – you constantly compete with everyone for either the valuable Arkana or just to have a chance to live another minute. Everybody is a rival and may turn against you.

The world of Beast Hour is a grim and unforgivable place. Be prepared to fight in cruel battles for the world’s most precious resource – Arkana.

Beasts complete tasks to sense Raiders and follow them to ambush and attack. Raiders must always be on alert and get enough Arkana to have a chance to confront Beasts.

With the help of Arkana technologies Raiders wield different elements such as electricity and poisonous gas. Beasts possess unique and powerful abilities like climbing walls, jumps all over the map, and hunting roar.

Level up during the game. That allows Raiders to unlock new abilities and Beasts to bust their strength. Shape your playstyle on the go.

Be the first player to reach the highest level and start Beast Hour – the final battle that defines the most dexterous Raiders and the strongest Beast.

1886. The uneasy truce is breaking down. The world of Beast Hour is on the threshold of a new and the most violent war of all time. The War for Arkana is about to begin.

Arkana is a special substance that fuels machines and gives unprecedented strength to the human body and mind. Arkana has become the reason for rampant industrialization and exponential technological progress over the last decades.

The value of Arkana is unimaginable – this resource is scarce and can only be found in the most dangerous corners of the world. Raiders – outstanding soldiers and mercenaries – look for this demanded substance to support their side of the conflict but, most of all, powerful and mysterious Order.

However, these places are ruled by Keepers. Beasts from all over the world come here to receive their blessings and prove they are the ones to lead the world to a new age prophesied by Cult.

Choose your side – Beast of the bloodthirsty Cult or Raider of the totalitarian Order. Win the war and uncover the dark secrets of Beast Hour!

We are developers of Beast Hour – asymmetric PvP-horror with parkour & monsters!

The game is being made primarily for PC players of horror, asymmetric and online games. Our indie team has made a long way and now Beast Hour is in the pre-Alpha stage. This is our Steam-page, and here’s where you can sign up for Alpha-testing. 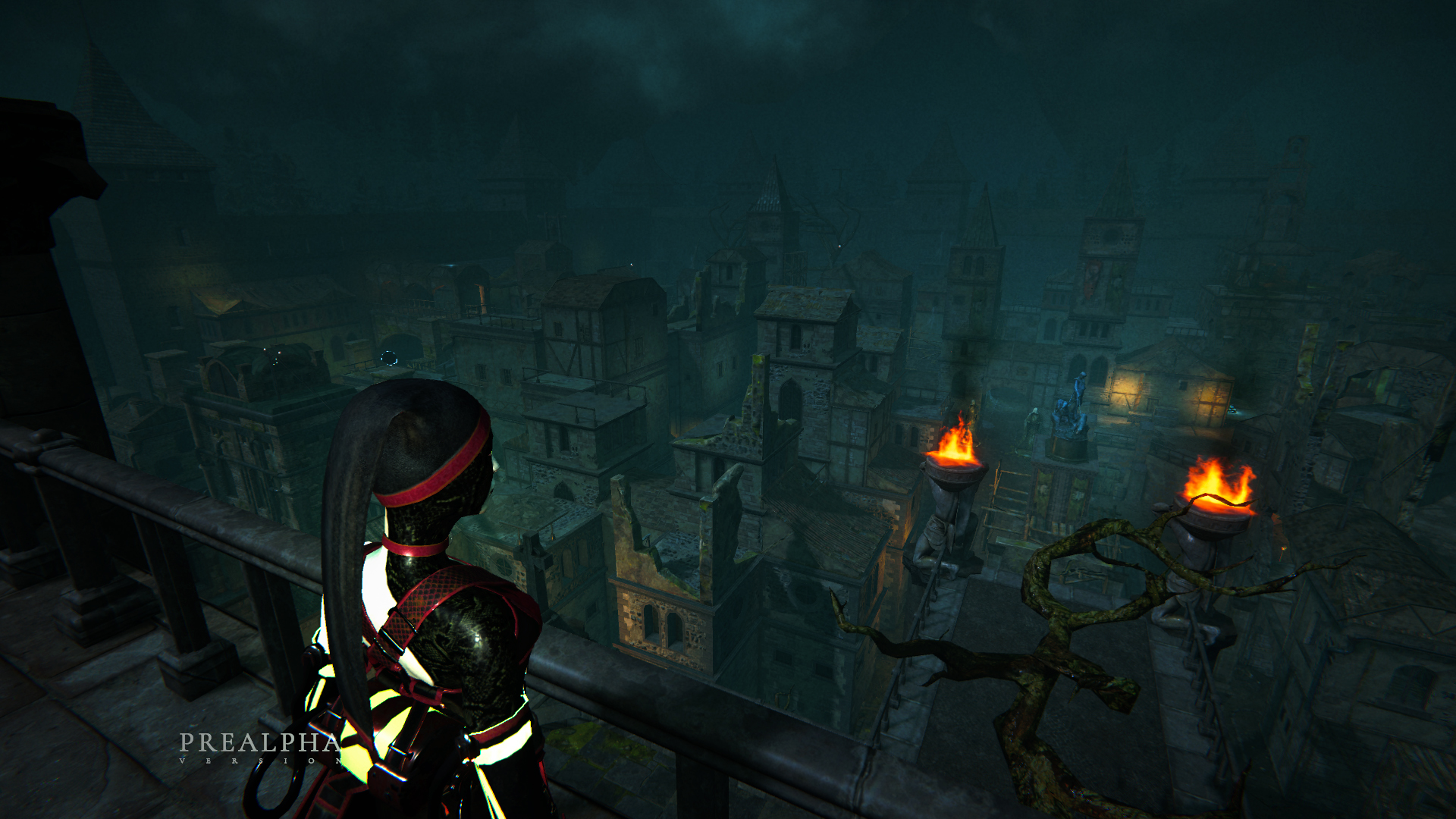 We love talking with our players! That's why we want to tell you more about the game’s development, share details about the behind-the-scenes content and, in general, keep you in touch with everything interesting happening with Beast Hour. The beginning of a new year is thematically the best time to start, isn’t it?:)

It’d be fair to say that Beast Hour didn’t have a proper UI at all. I mean, user interface was technically in place but the thing is – it was a temporary solution that wasn’t particularly good-looking and user-friendly.

Last year we started prototyping a new UI almost from scratch. This month the first new version has seen the light of day and it has been put to the test.

Just compare how user interface looked like back then and now: 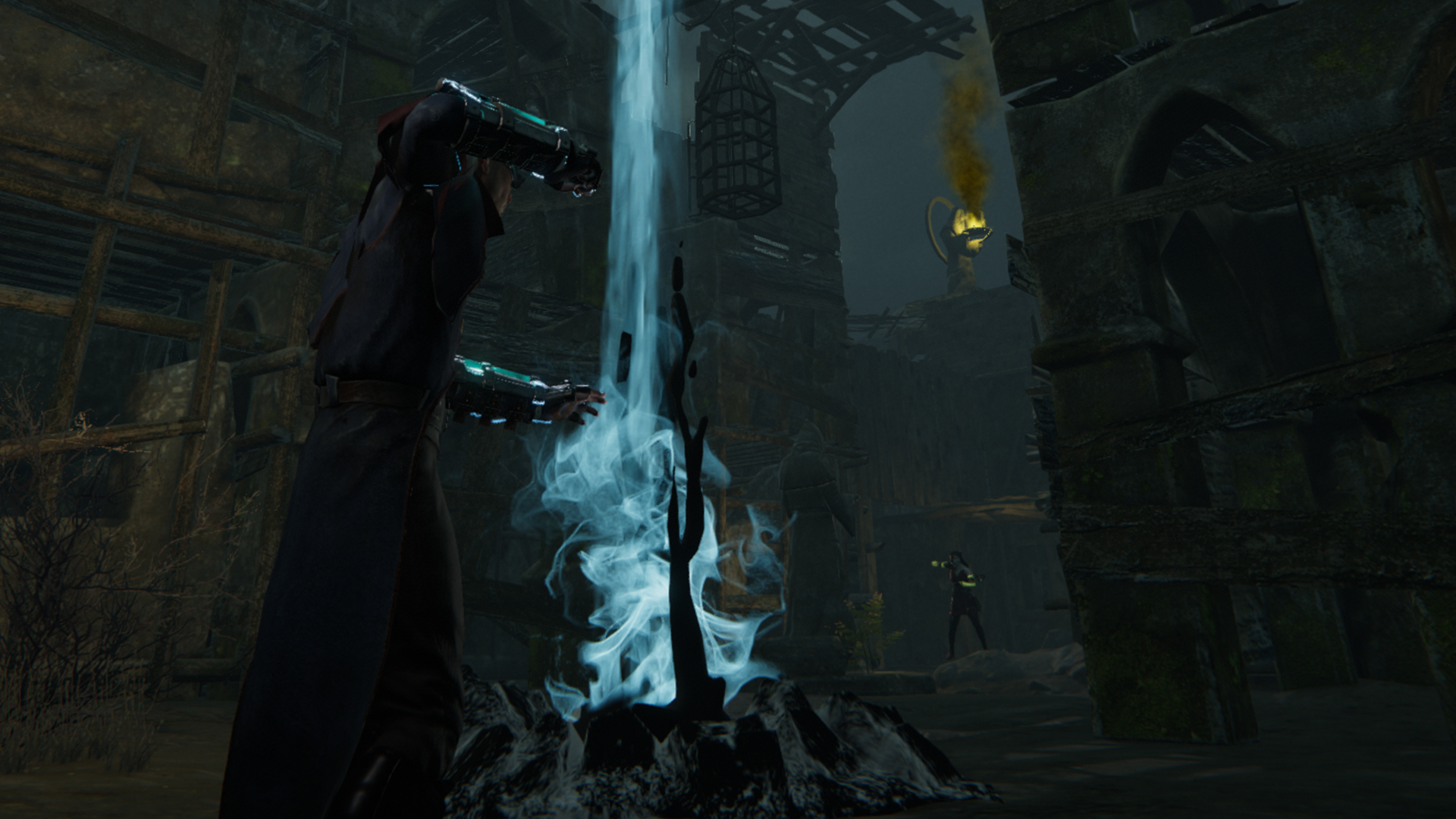 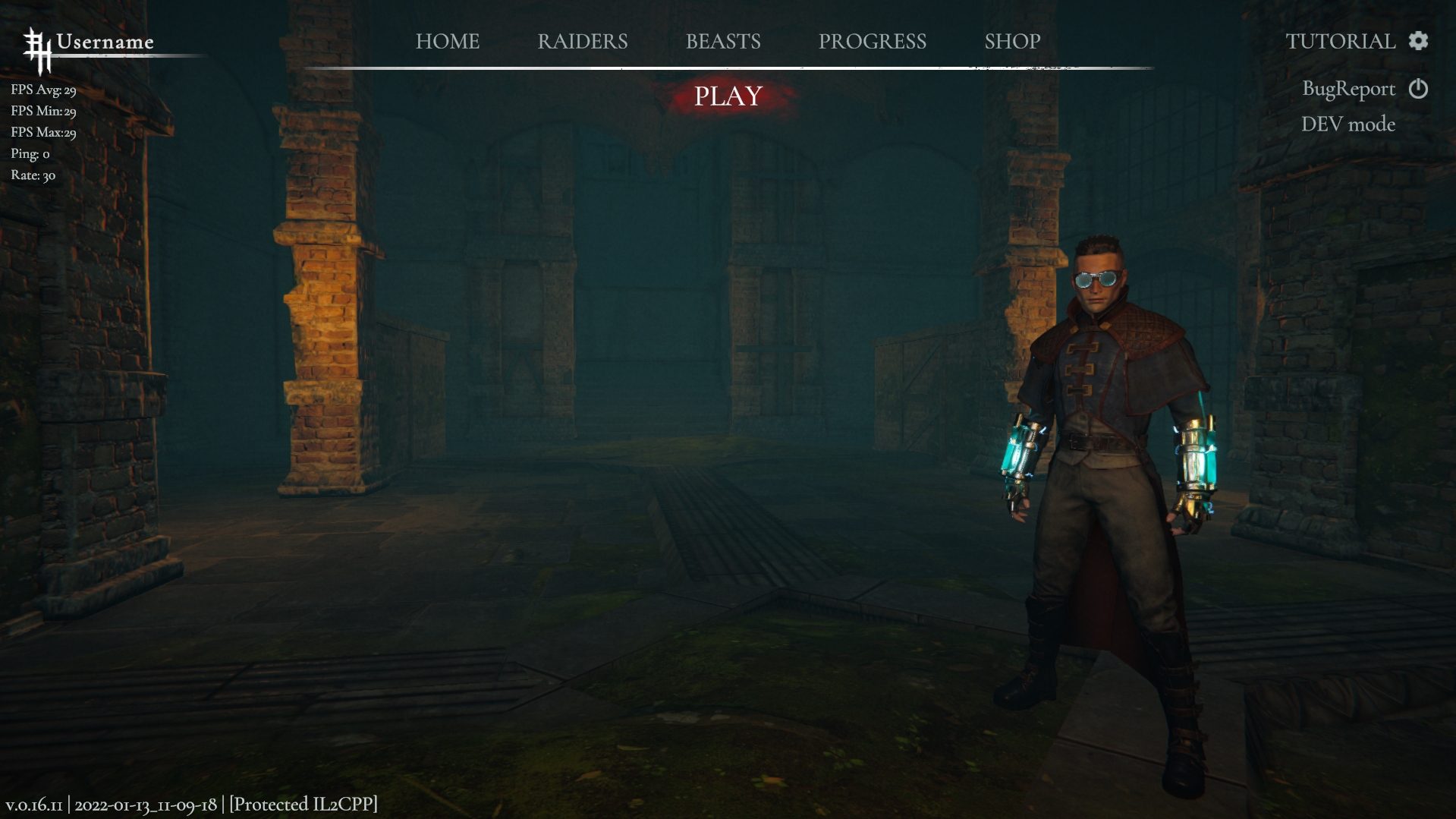 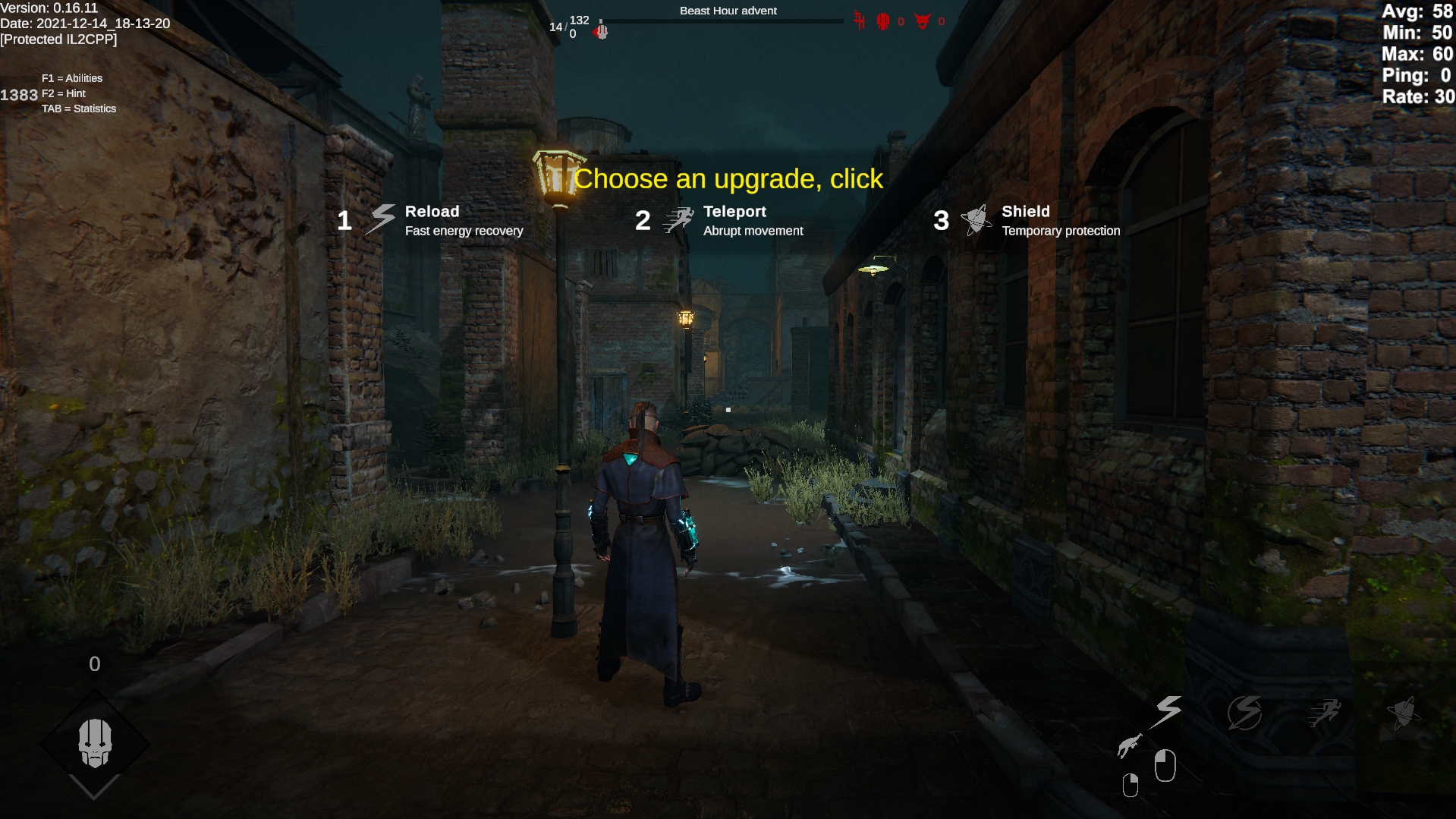 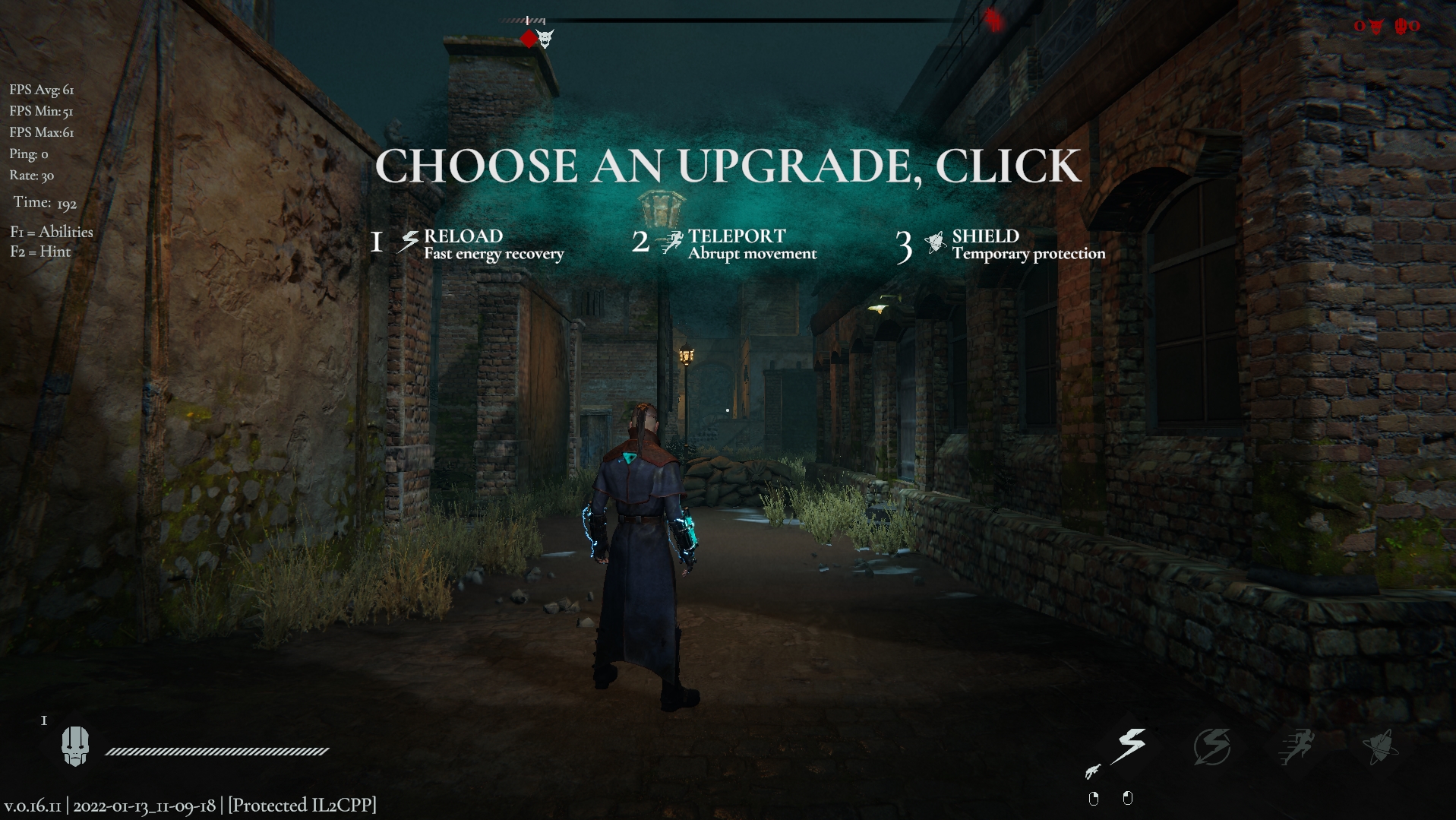 I want to make it 100% clear – it’s NOT A FINAL VERSION. On the one hand, we already have the plans for UI improvements and, on the other hand, what is more important, there will be Beast Hour Alpha testers’ feedback.

The center of attention this time has become the “green district” where mushrooms have grown and many new mini-locations appeared, such as a windmill, graveyard and other fascinating places!

Underground location of the green district. December of 2021 and January of 2022: 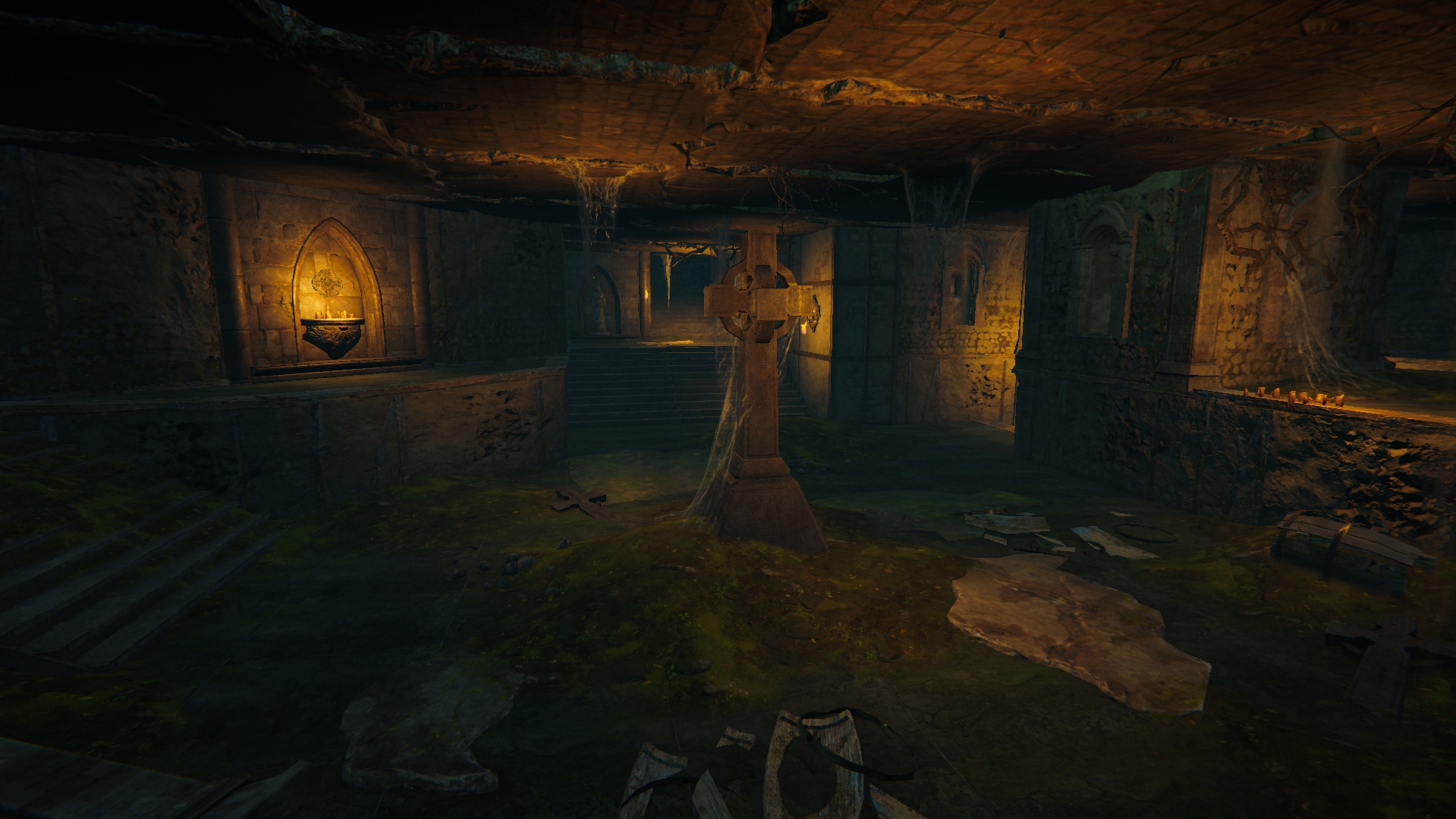 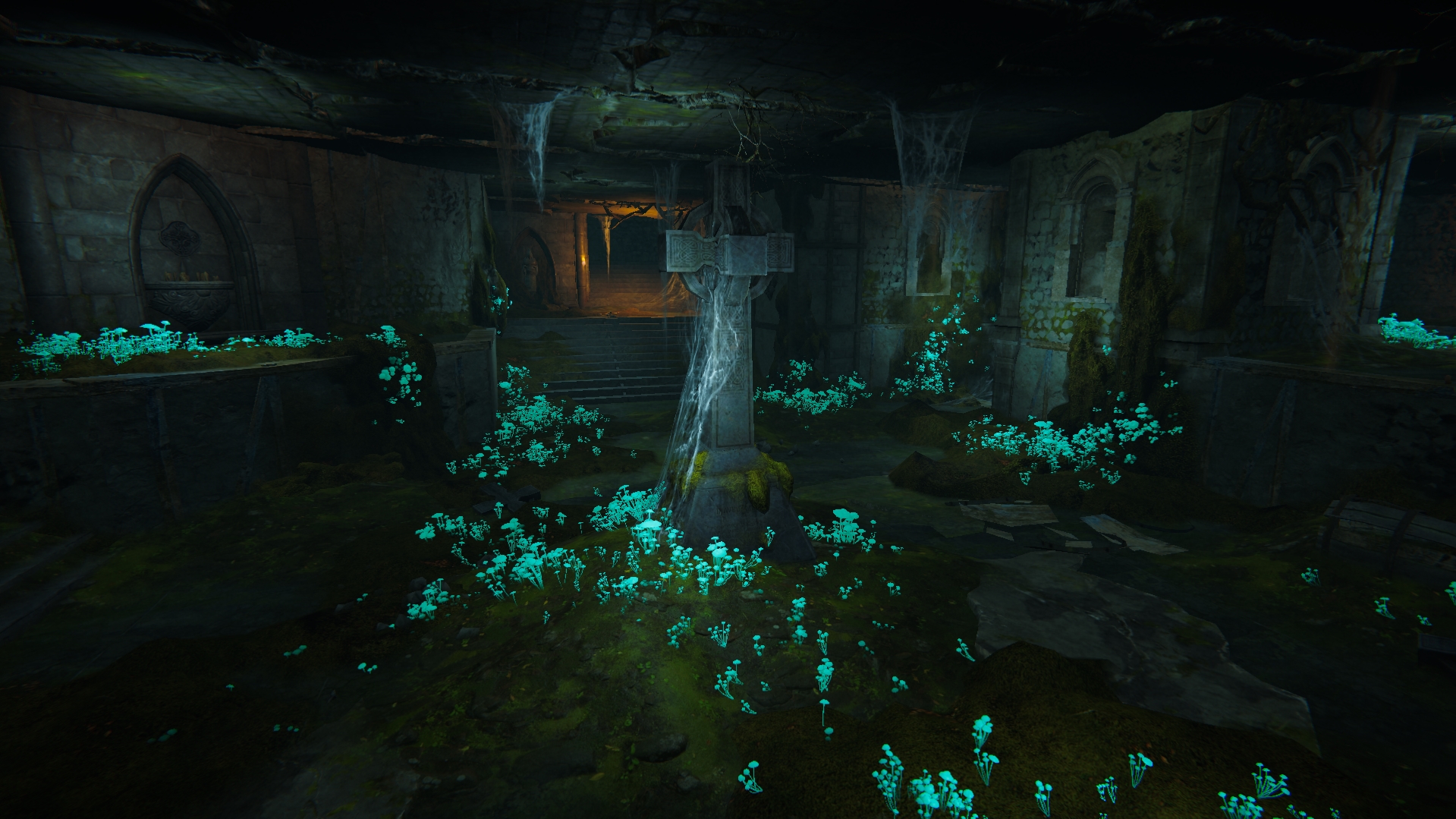 We do love our fans and they reciprocate our feelings! For example, MrAvogato has made a rap song about Beast Hour which we then turned into a full-fledged clip. Check it out!

It’s inconceivably cool when our work inspires others – we as well draw inspiration from other games, many of which gave us ideas to start the development of Beast Hour.

I remember how someone asked us: what was the funniest bug you ever had in Beast Hour. Truth be told, we were confused as realized that there was nothing especially interesting to share on the matter (more often bugs annoy rather than entertain our devteam). But right after there finally appeared a funny one: every character on the map increased in size in 2 or even 5 times. 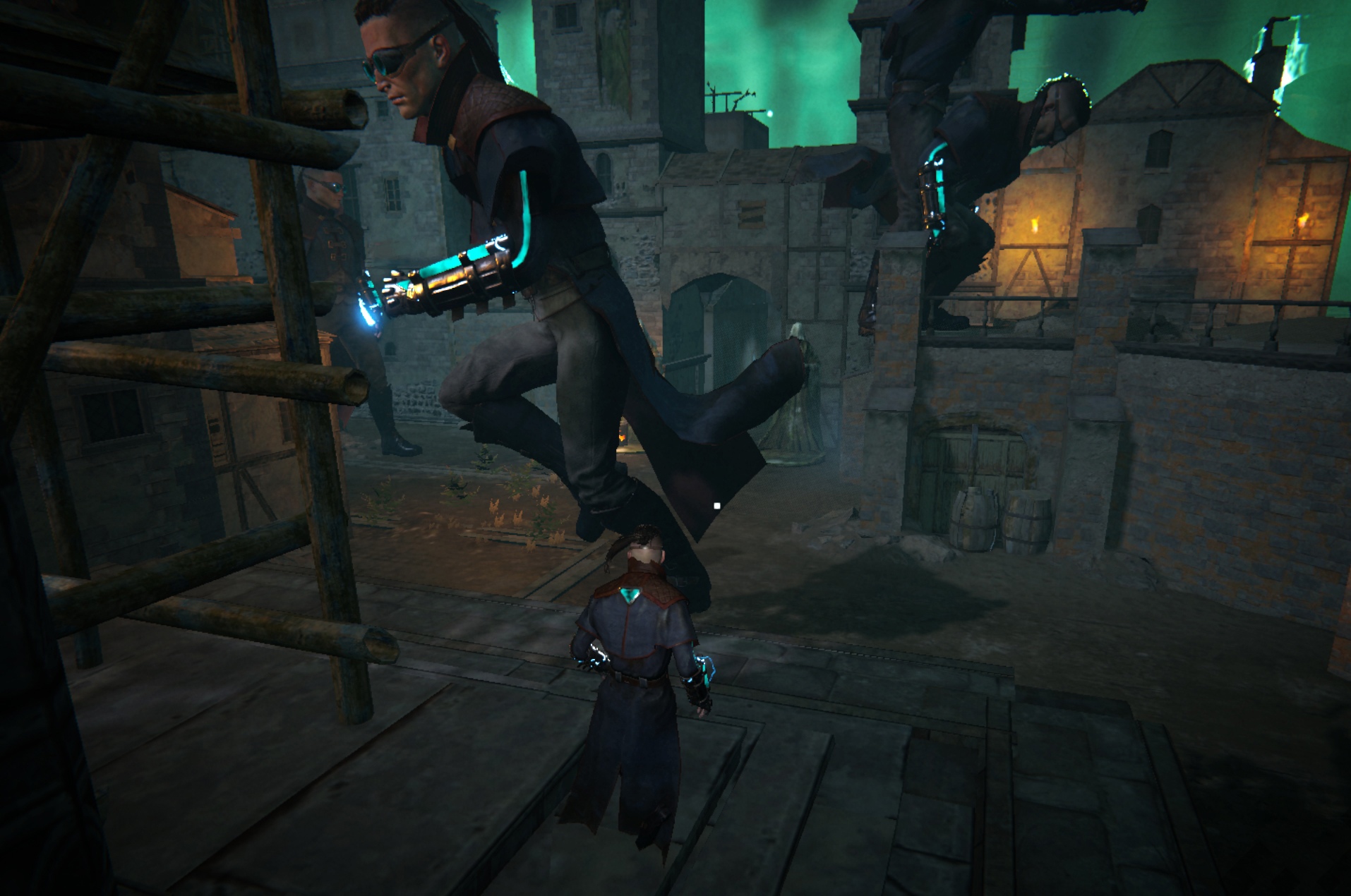 But this month we’ve got a new hilarious bug: a character starts spinning while interacting with Arkana – the source of EXP in Beast Hour:

Of course, the problem has already been fixed by now but it was good fun playing with it:)

We got into the habit of posting a new piece of content on our social media channels at least once a day. It doesn’t matter if it’s a weekend or a holiday even. It’s not easy to work at such a pace but we believe that this is the way.

The most chunk of attention, likes and retweets we got under this post on Twitter. This gif shows how Beast Hour looked like a bit more than a year ago from now.

And what do you think: is full decoration crucial or are you ready to play the game at an early stage?

Steam-page is like the face of the project. For more than half a year we didn’t change its content at all. At the end of December it became clear that it’s the wrong approach. Many screenshots got outdated and the description was too cumbersome. It was time to change!

The logline of the project got remade with the strong emphasis put on the asymmetrical nature of Beast Hour. We also tried to describe our key features in a better way. Every new screenshot now ought to have an interesting narrative conveying through it.

Just have a look yourself! 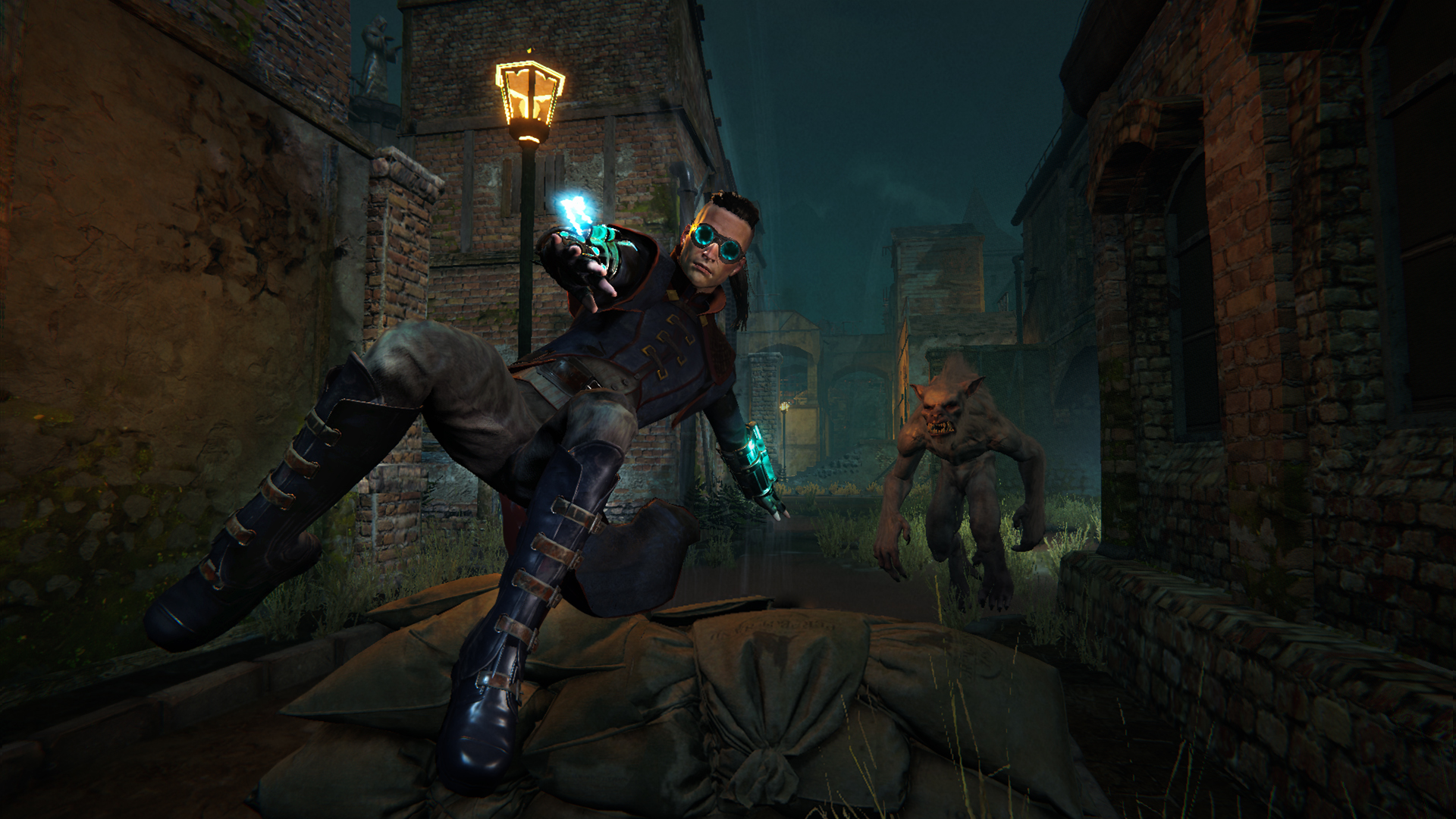 Ever since the launch of Beast Hour Patreon-page we held a closed Q&A-stream every month for our supporters. Now it’s open to everyone!

We did have some sound issues but hopefully they will get resolved within a few months:)

Right now all of our programmers are busy preparing servers for the launch of Alpha. Gameplay-wise the game is mostly ready, but the process of connecting to a game server is not an easy thing to do:

Once the programmers have finished their work, the connection becomes much easier:

We do our best to hasten the day this matter is settled to start Alpha-testing! 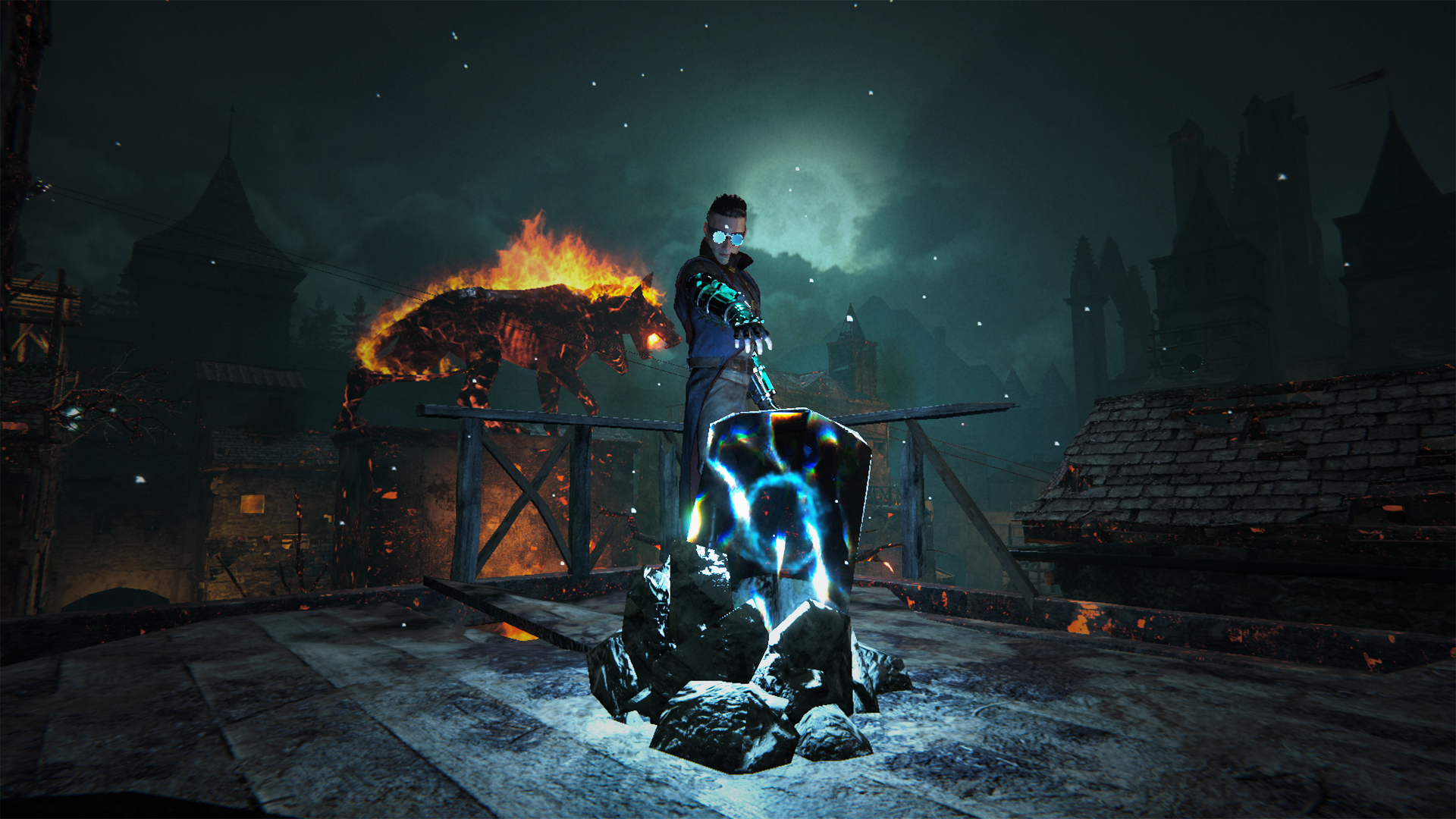 But if you are eager to try the game out right now, we have a solution for you – join us on Patreon! You’ll also be first to receive our lore materials about the game, you’ll get access to a closed chat and special roles on Discord and your name will be in the credits. We value this support very much!

Join our social media channels, wishlist the game on Steam and tell your friends about Beast Hour. Every player matters!

Contact us via email if you want to participate in the development or feel like discussing other forms of cooperation – bizdev@beasthour.com.

The Beast will come!

Beast Hour: making of the PvP-parkour from werewolves🐺

Today we want to tell you about Beast Hour development story. The main references were: parkour chases gameplay from Prince of Persia: Warrior Within...

Beast Hour – parkour away from werewolves🐺

A third-person PvP-action game, where you either run and parkour or hunt and kill. The game is dark and bloody – it will be scary!

Them and Us Third Person Shooter