From PlatinumGames’ legendary director Hideki Kamiya of Resident Evil and Devil May Cry fame, SEGA brings one of the most universally acclaimed character action games of all time to PC.

Bayonetta. The last survivor of an ancient witch clan who keep the balance between light, dark and chaos. Entombed to protect herself – and the world as we know it – Bayonetta is discovered and revived after 500 years, sparking a chain of events with cataclysmic repercussions.

Thrust straight into battle, with only one clue to her past, Bayonetta must discover the truth and fight for the future. Her daunting conquest sees her face off against countless angelic enemies and giant foes in a game of 100% pure action.

BAYONETTA ON PC IS BEST EXPERIENCED WITH A CONTROLLER.

An alluring, stylish and all-action heroine unlike anyone else on the gaming landscape, Bayonetta is ready to push your senses to the limit.

Over-the-top action in extreme environments resulting in continuous high levels of tension and excitement – Bayonetta pushes the genre into new realms of intensity.

Bayonetta wields an impressive arsenal of weapons through an intuitive and fluid combat system, unleashing deadly combos and special attacks with devastating results.

Unleash gruesome torture attacks such as the Iron Maiden, Guillotine and more to finish off enemies and send them to hell.

Freely switch languages and subtitles at any time.

Check out MarshmallowMachete's latest weapon and costume reskins for Bayonetta.

A blue and black 'cube design' reskin which replaces Umbran Komachi A from the super mirror. So basically what the author has done is paint the entire kimono and sleeves in a blue and black design from the movie Cube (1997). The bow and ribbon on the back was made blue and blue petals and ribbon were added to Bayonetta's hair. The trinkets in her hair and the socks have been made black.

A pink/purple reskin for the Scarborough fair handguns, replaces both sets. The main body of the guns has been recoloured in a pinky lilac colour with purple detailing replacing the gold. The black sections have been changed to a silver colour. Please note that these work in game and in around 50% of the cutscenes. 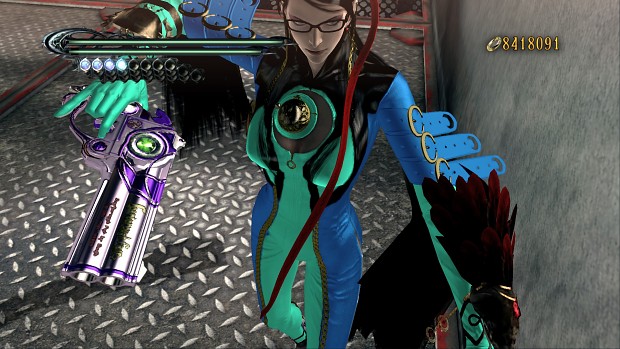 A weapon skin for the Onyx Roses Shotguns (Not the alts). The main body has been changed to a blood red with black detailing. The 'spotted' sections have been changed to black with red specks/spots. The author also darkened the silver sections to give them more of a pewter look. 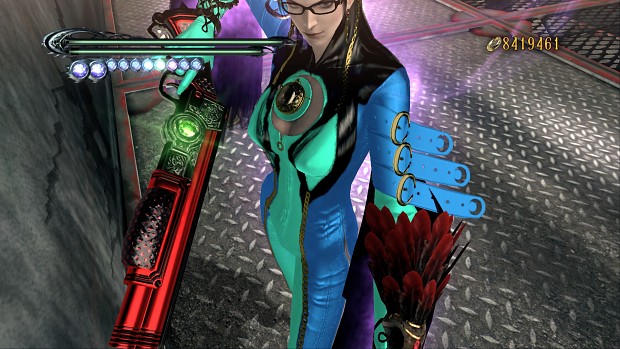 Jeanne's 'Purple Jester Extravaganza replaces Jeanne's default costume. The costume has been recoloured in purple, white and black stripes with white gloves and shoes to match. The neck piece, cuffs, bow on the back and buttons have been changed to a bright pink. Her hair is now black with a white feather. 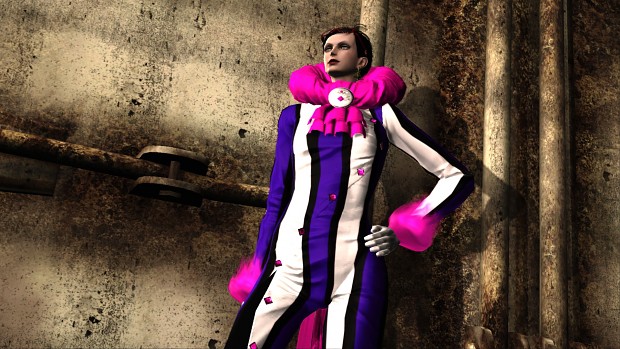 Jeanne's 'Poison Ivy' (green with red hair) Costume which replaces Jeanne's old costume on the super mirror. MarshmallowMachete has recoloured the costume in light and dark green shades, made her gloves black and given her red hair for that poison ivy look. 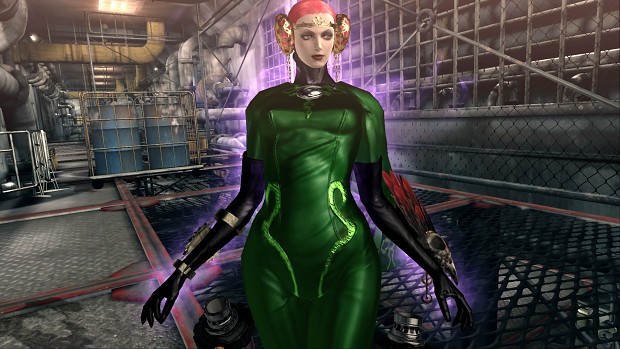 A pink and silver reskin for Bayonetta's Old Costume. Bayonetta's 'Platinum Princess' Mod. This replaces the old costume and includes the costume, hood, shoes gloves and hair. MarshmallowMachete's painstakingly recoloured all the filigree in silver and changed the main colour to baby pink. The inside of the gloves and hood and gem details have been changed to blue. Some lilac streaks were also added to Bayo's hair. 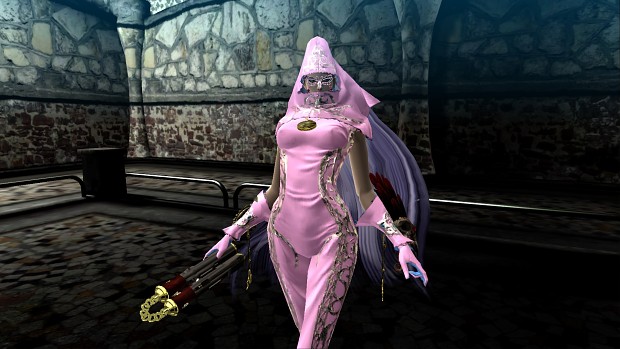 A multicoloured reskin for Bayonetta's Queen Costume to match the 'Party Time' Wicked Weaves. The front of the hat was recoloured in dark grey and white stripes and the back of the hat and the hair in dark pink. The main body of the costume has been left black. The skirt panels have been recoloured in dark grey and white, there are a couple of imperfections in the panels but a quick check on the original showed that they were already present. The gloves and thigh boot sections have been recoloured in lime green and dark pink and the author has made the eyelets and lacing black. Wicked Weaves are designed to work in combination with it. 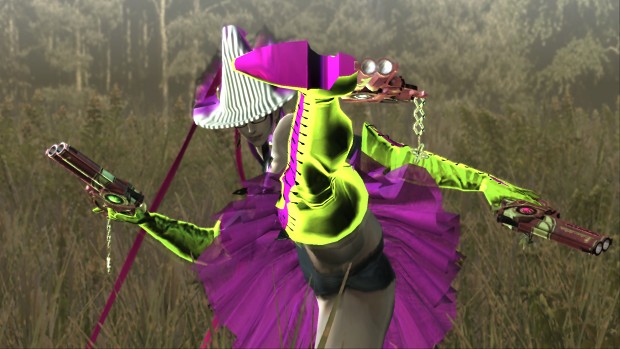 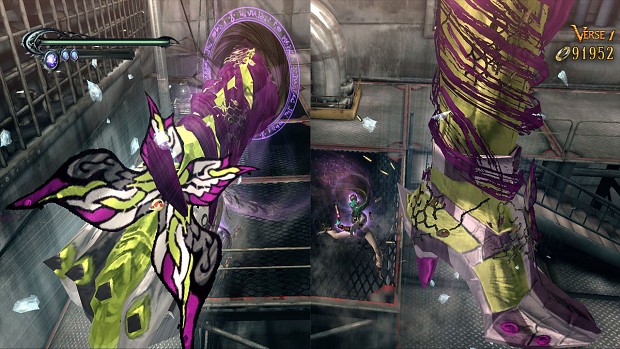 Blue/green reskin for Bayonetta's default costume. An update was added which now includes the sleeves, hair and ribbon details. The chain detailing has now been changed to black. Royal Blue and Sea Green were used as it was loosely based on the weapon Odette. 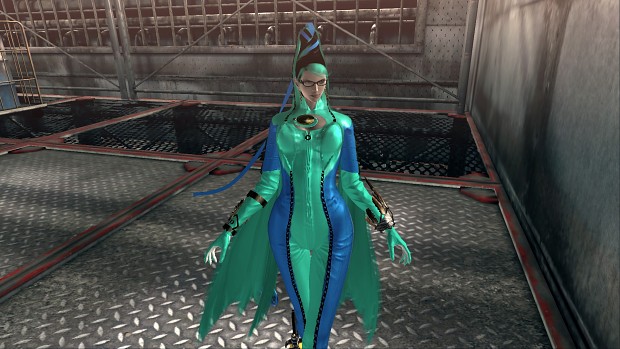 That is all for now. You can browse over latest Bayonetta's addon listings here moddb.com/bayonetta/addons as well as addons for other games here moddb.com/addons and also follow ModDB news and features on

A green camo kimono mod which replaces Umbran Komachi B on the super mirror.

This is a reskin for Jeanne's Umbran Komachi A costume from the super mirror.

A pink/purple reskin for the Scarborough fair handguns, replaces both sets. Install instructions are included with the download.

A reskin for the onyx roses shotguns (not the alts). Install instructions are included with the download.

Berserk and the Band of the Hawk Hack 'n' Slash