Battle of The Atlantic (BotA) is a Real Time Strategy game based in the North Atlantic during World War 2. The game allows the player to play out the battle from the side of the Axis, made up of Italy and Germany and the Allies, made up of Britain’s Royal Navy(RN), USA's United States Navy(USN) and Royal Canadian Navy (HMCN). The player has the opportunity to replay some of the decisive battles of the Atlantic War as well as create there own version of history in a dynamic campaign. I aim to create a historically accurate product without sacrificing fun, this is not designed as an arcade game but a deep strategy game that would push the thinking of both new and Experienced RTS players. The game experience would be centred around a 2d command map showing the Atlantic gaming area complimented by a 3d world which with the aid of static and 'Free' camera positions will enable the player to life a cinematic experience of the action as it plays out in front of them.

Well This week was going very well, was making good progress until I came across a strange bug with Uscript and Ngui compatibility, where Ngui's reflected nodes would overwrite each other. But never fear the Uscript guys are looking in to it so fingers crossed.

Before Progress was halted abruptly I did get some info pop-ups done. These will be mouse roll-overs for when you roll over any icon on the map screen the pop-up will appear and give the ‘vitals' of that icon. This can be turned off in the preferences if pop-ups annoy you.

Here's a Screeny of the single ship pop-up:- 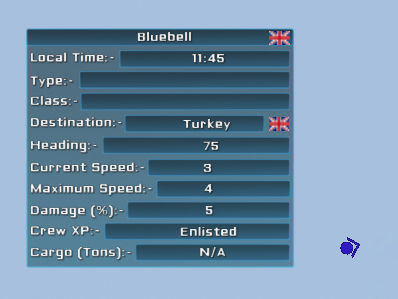 Obviously this example data is mainly placeholder, but the speed values and heading are currently hooked up correctly.

The rest is just placeholder until I get enlightened on these database type things. Which itself is on the backburner as Maus (creator of the Uscript Necronodicon pack - which now adds 200 new nodes to Uscript) has been drawn away with freelance work so it will be a few more weeks until I can get that done. My job is also just beginning to get in the way as well :(.

Apart from that mixed progress here's a few other things which have been worked on this week:-

Thanks for Watching.
John

Lest we Forget The 11th Hour of the 11th Day of the 11th Month is almost up on us. The time when many of us will stand together in silence and reflect...

Been another busy week, I still unfortunately don't have a huge amount to show for it since most of the work done has been ‘under the hood'. But Various...

This week I've focused almost entirely on tying up the loose ends on the basic plot course waypoint system which is obviously quite a large chunk of the...

This week has been quite a frustrating week. With not a huge amount to show for the hours put in…..mainly bug fixing, and you know how it goes…you...

Prototype of the Plotcourse/Waypoint System

This Game looks terrific and I love the premise of the style. If you would need anyone to test I would be willing to give it a shot.

Would this include doing the crap stuff?...Im being serious. I might need a tester in the not to distant future to test things like the nav system and UI Bugs, but it won't be fun stuff...yet! :)...cheers for the support!

I could power through it. My experience is mainly with Paradox games with naval strategy, but I do have experience with indie games though. If you need any other assistance with the build you can let me know. I could give pointers on history and some other things. For more info from me you can email me at forrestrt@gmail.com.

Wow, this look like a realy long time project. :o I hope u will sucseed, get a team and create a great game. A am a big NAVI fan, and I played a lot of sea fight games. (Sillent hunter etc.). U have my atention so I tracking this and oray for u :D

Thanks for the Support!

Indie
Tags
Embed Buttons
Link to Battle of the Atlantic 1939 - 1945 by selecting a button and using the embed code provided more...