This is an expansion pack for Battle for Middle Earth II. It adds new armies such as Arnor & Angmar and has many new expanded heroes and units. The game focuses on the Return of the Witch King to power after the fall of Sauron in the second age. In his new arrival Arnor is losing its blood and is scrabbling over Rhuadar, Arthedain and Cardolan.

Edain 4 Demo is released, and we hope that you're having as much fun as we do.
We're sure many of you are wondering how to make your custom maps work with all the new mechanics, building system, and other new concepts of Edain 4.0, So we would like to present to you a detailed tutorial explaining how to make your maps work with Edain 4.0 and all other future versions.

First of all, make sure you have Edain 4 enabled in Edain launcher (otherwise it won't work).
Now open your map, as usual, with the World Builder of Rise of the Witch King game (you can find it in the main game folder).

Search for the starting points on your map

they should be designated as Player_1_Start, Player_2_Start, and so on. These are the places were you would start in a fortress in the older and vanilla versions.

When you find the starting point for the first player, open the "Place Object" tool 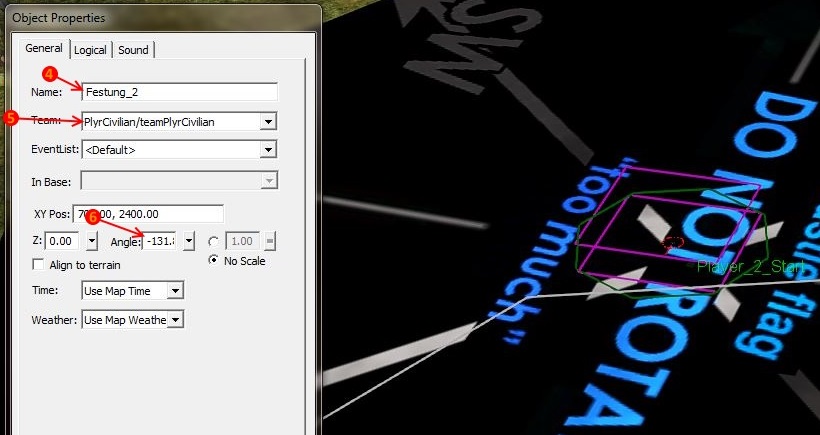 Place the starting object that fits your map, and name it

Festung_1 for Player_1, Festung_2 for Player_2, and so on.. then change the Team

to PlyrCivilian/teamPlyrCivilian
As you would rarely get the facing right at first attempt, you can change the rotation in the Angle field

.
The main facing of the LagerPlotFlag in game will be to the side that is labeled "UP", and the gate of FestungPlotFlag will be on the side that's labeled "Top". you can see the exact height of the terrain. Now open the Height Brush

in the Brush Height field. For the Brush Feather Width

put any value less than 5. For the Brush Width

put a value of 65 for the Camps, and 120 for the larger Castles.
Now place the brush right in the center of your Castle/Camp and use it.

Note that you may have only one type, either Castles or Camps, per each map. So all players should have the same starting bases.
The settlement and outpost building sites are much easier to place. Simply place the WirtschaftPlotFlag for Settlements (it's in the same place as the Castle and Camp objects), and ExpantionPlotFlag for Outposts (find it in ByNativeType / Neutral / MISC_MAN_MAD).

NOTE: settlements and outposts must be assigned to team PlyrCivilian/teamPlyrCivilian and must NOT be named!

Another important change that is important for the various new systems, such as the Dwarf Expedition, is to define a point to leave the map and a point to enter it.
Use the Waypoint tool and create a waypoint

slightly outside the map boundaries where the troops will spawn.
Name the waypoint Player_1_Spawn for Player_1, Player_2_Spawn for Player_2 and so on. Using the Waypoint tool draw a line up to the map

. write in the Waypoint Path Lables Player_Path purely without any number

Now create a waypoint inside the map

from which the units will leave the map, and draw a line to outside the map

NOTE: you must create those two In and Out waypoints for every player.

In the end, here's a quick summery that you should finally check:

Make sure that Outposts and Settlements Plots are unnamed.

Clean the ground under Castles/Camps from all other objects, and flatten it with the Brush.

Create a waypoint path from outside the map to the inside, and name the first waypoint Player_1_Spawn, Player_2_Spawn,...etc. and name the path Player_Path.

Create a waypoint path from inside the map to the outside. name the pathe Player_1_Path, Player_2_Path,...etc.

Congratulations! Your map should now work like an official Edain map.

best regards for all mappers xD

Let's hope the tutorial here on ModDB will push more users to convert maps for Edain 4. We can't do that all alone xD

I do hope so.. it's all for the benefit of the community^^

Hello, I need help. "Edain v4.2" I do it for, the map does not begin to PC gaming. My camp is established, but the PC is not set up camp. Therefore PC defeated in a few seconds.

After doing what you said, everything improved. Thank you so much.But there is still a problem.The game installation screen, map image looks black. How can I do it like that in the original map. If you tell me that also, I'd appreciate it.

This guide should help you with most things in your map ;)
The3rdage.net
"Your loading image needs to be a .tga file of 128x128 pixels. Simply
resize your loading image, tweak it if you want, and save it as a .tga file.
You will need to name it “yourmap_pic.tga”, where “yourmap” is the
name of your map. For example, my “Forlindon” map has a loading image
name “Forlindon_pic”. Save this in the same folder as your .map file."

Thank you so much. I understand everything you say. I will examine the link you gave me. But mainly I want to know. How do I get my picture on my map?

It's in the tutorial under "loading image". Simple and easy ;)

Well, it is what it is :\
But with practice and patience, all can be accomplished ;)

I did everything.It was not a problem. But I can not do this mini-map. I did as told in the form. Mini-map was completely black instead of brown this time. I drew the mountains do not appear. :(

yuuuupppiiii ohooooo :D :D :D I did just now. Can you believe it? I just did. There was a mini map. : D: D: D Thank you so much for everything.

I have one last question again. When playing as a Gondor AI only "GondorArcherRange" to building. So just take the soldiers to the army Archer. How do I fix this?

I'm not sure i understand you. Are you saying gondor AI only build archers?
I think it's a bug with the AI in the mod. It has been reported many times. Though personally I've never encountered it.

only in this way is what I do in map

normal in the original map. so there is no shortage. The things I've done, but there are problems. AI also does not capture Expansion never flags.Expansion Flagler's name should be what?

I'm not sure what do you mean :|
AI should work with all maps IF you follow everything in the tutorial right.

It's the same process for teams in all ROTWK maps. There's a "teams" tool in the toolbar where you create the teams.
Then they will appear normally in the dropdown menu.

Thanks to your help I finished my first playable map. It is my interpretation of the Southwest part of Ettenmors . You can see it by clicking on my name ^^

Then join the group and post your map for all to see ;)

Hey man, just started creating a map today and wanted to try it out. But everytime I start, neither castle get constructed and the game immediately ends. I've checked and double checked that all castles are set to PlyrCivilian/teamPlyrCivilian, I even downloaded another map to edit and see if all the data was the same in their castles and they are. I just don't know whats going wrong :(

Okay, I actually solved that for myself! But, when I fight on the map, the enemy does not build troops, only sends his two battalions to my base, and does not create any buildings of his own? :O

I've figured that one out too haha! But now, AI will not capture any economy flags, anyone know why?

if you use all the correct types of flags, the AI should automatically recognize them.
If the AI behaved in a certain weird way, usually there's nothing to do about it.

Can you please tell us how to input gollum in a custom map,cause i tried but its not moving and even if i kill it it wont drop the ring.thnx in advance

Gollum is a script that I think is still the same one since vanilla RotWK.
To get the exact script; open any Edain map (and probably any map from this group) and search for a script called "SkirmishGollum_Spawn" and click Export Scrip(s).
Now open your map and Import this script. You will directly have several waypoints. Place each one where you want Gollum to spawn. Now test your results :)

i dont have any maps besides dol guldur for some reason and when i used that maps script it told me my map was to big for it(dol guldur 490x490 mine is 520x520).any idea why im missing all of the .map files?i mean all i have r the .tga files of those maps

This shouldn't happen. All edain maps are in .big file and the ini are in the edaindata.big

Maybe it's a bit late, but either way:
Gamereplays.org

I cant find the first step. The "festung plot flag" isnt under that section?

i lost my Object Properties tab, it no longer opens automatically with the map editor, any help

Hello there. I'm downloaded Edain 4.3 and I can't get World Builder to start up. It works when I disable the mod thought. Is there a way World builder can work again without disabling the mod?

That is a bug I've encountered also every time I ever installed Edain 4.3, the only way I've been able to fix it is to update the Edain core files to 4.4.1. Hope this helps, fellow mapper!

I tried to translate a map according to this article. But he's making a mistake. Other parts do not come when the main building opens the game.