UPDATE: Being the first game that I coded in Java, Baneforge's main class have over 14,000 lines of code using the base LWJGL libary. This made further development slow to a grinding halt. Though I loved the idea of Baneforge, I am now developing the team-FPS-Arena game SkullSpear. (www.tribalterror.com)


A customizeable and open-ended Multiplayer RPG experience that you can share with you friends or others online. One player leads the story experience as a Game Master, spawning and controlling NPCs to interact with the other players, the Heroes.

Thanks for voting and helping Baneforge on it's quest to become the 2021 Indie of the Year. You are now in with a chance to score some free games. Help this game secure more votes by embedding the widget (or link) we have included below on your favorite sites.

The next release of Baneforge, 0.86, will look a bit unfamiliar. The main menu screens have been changed quite a bit to reflect the open-ended and artistic styles of the game. The new character creation form shows previews for all of the possible hero profile images so you no longer have to click on all of the text to choose the one that fits your character. 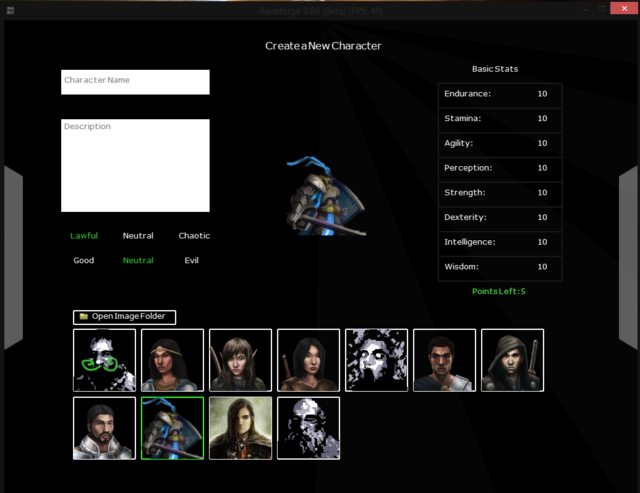 Furthermore, the list of hero portraits is still tied directly to your App Data folder, but I added a button to easily prove this. You will see that in the preview, I drew a green mustache on the first profile image's face, and this update reflected in the game instantaneously. This is why I love Baneforge!

More updates will soon be on the way. I am copying a lot of the preview-image code over to the campaign creation screens right now. In fact, I should probably get to work on that instead of typing in this blog.

For more information on Baneforge or to download the current (and slightly rough) beta version, visit www.baneforge.com

The newest version of Baneforge, 0.84, will not be downloaded in the traditional manner. The new Launcher will automatically download the new files and...

A recent update of all the updates that I have added to the game.

The aspects of Baneforge that set it above all other RPG games such as: Completely multiplayer, All story content is human-generated (mostly by your friends...

If you have even served the role as a Dungeon Master in DnD, you will be very comfortable as a Game Master in Baneforge - you will be doing the same things...

A version-less launcher for Baneforge that will automatically search for the latest Baneforge release and allow you to download it seamlessly from the...

An older version of Baneforge, came out before the new Baneforge Launcher existed.

Baneforge Store is not working dude. Says that the requested file can not be found.

Hey man is who is behind internal toast I think I know this kid......

I cant seem to figure out why it won't boot up for you all. I am running Windows 8 64 bit with Java 7 64 bit and it works fine. It is possible that it isn't compatible with 32 bit, but I don't have a 32 bit machine to test it on and, apparently, since java is a VM, it isn't supposed to matter.

the launcher doesn't start for me on Vista , idk why... no errors etc just wont open and seems like it doesn't show up in processes as well

I will look into that right now.. make sure you have Java 7.

Yeah, is there other files that need to be downloaded for this to run? It dosen't even load the exe at all - I have windows 7, 64 bit. When clicking the launcher, or the 0.83 exe. It shows the hour glass like its about to load, then nothing. Not sure what the problem is - was looking forward to tryin this out! =- (