Ball of Doom is a game made by Frostblood Studios (not listed on moddb). It features cartoon style graphics, a sense of humour, and Programmer Art? Who came up with that idea, I don't know. Anyway, I will release more content for the game in form of patches, and the level design... well that's ok-ish!

Ok if you didn't know what that meant, this basically means I am letting other people use my game as a template, because I am going to release the full version with 20 main missions, 10 Skydiving Missions and 1 Superhard Mission, which is probably impossible anyway. But Just because of that, I have actually finished that and when I release it fully, it will be using an installer for the reason that then I can patch it quite easily for new expansions that I will release for it. Obviously, they will include more content, but all they do is replace the old .exe and source code release with the new updated one. Here's my progress to completion:

So there you have it. The First Expansion (addon) will be announced as soon as I get the game fully packed up and ready for release. The zenlectro music I promised, well... you can make that yourself if you want. I don't mind. Thanks for reading and I hope you guys will like the full release.EDIT: Full Game + Source Released in 2 Seperate Packages!Also, ModDB, I can't make anything better than Programmer Art with a crappy Fireworks Program, I would rather have Photoshop but thats a lot more money, and also google Ball Revamped. That's a fun flash game.

Well then, We have more news! Let's read and not care about the fact that this game isn't in Pre-Alpha! :D

Might as well re-use the info shan't I? Newsflash #2!

Information about the game. Click on the title to find out more...

The Source and resources to Ball of Doom. Credit me. Also includes game.gmk file i used to make the game. CREDIT ME especially if you post the game as...

15 Missions, More Features and a CD Music Player system! That's not only what I changed in my gaming entry. I hope you like it.

What I have done so far. Try it out and comment on what you think. I hope you like it. 3 Normal Levels and one Skydiving levels. The preview picture is...

Game looks pretty cool for a timekiller, you should put it on a website or something.

Also if you like making games, like the one below me said, drop GameMaker. Try Flash 8, CS3, CS4, alot of games are made with it. Or for handheld games (Nintendo DS etc.) try Torque Game Builder. If you ever need help you can ask me, I'm an game developer myself (not proffesional).
;]

Ok kool thanks for the help, I haven't been making games lately due to pressure at school to pass certain exams to get my GCSE options, but yeah, I'm making a game at the moment using flash CS4, so I shall probably release it once it's done.

nice improvement but i cant believe u r using game maker. its not very good program to make game u noe

he's right. you should drop game maker, go for source sdk and get hl2 players to play it

I wish i could, but I am crap at Source, I tried making a mod in it before, I can't. But I will use a better one for my next game... Which I am trying to find at the moment for a reasonable price. (Maybe a Free one like Adventure Game Studio)

im not designing the graphics in Game Maker. It's just for level design. Anyway this is my first game. I'm going to use a different engine next time. I'm a beginner, so what do you expect?

well i hope u r able to improve i understand the project just begun but try to improve the graphics so it looks more cartoony :)

I will try to :D but my skills in Fireworks aren't that good, So i can't do much without drawing and scanning in. But I can and Will try to improve the graphics, while keeping my edge of sarcasm in the crappy graphics I kind of want.

Your game description says what you do but is not really a description of your game. The screens don't tell much more to me.

Ok I shall change that, but The game is basically Ball Revamped with Skydiving and so much more.

it is in pre-alpha but the graphics are final. I wanted to make it cartoony .

Ok, I changed the graphics just to let you know, but yeah, It's not in pre-alpha :D 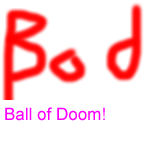 Tags
Embed Buttons
Link to Ball of Doom by selecting a button and using the embed code provided more...

Sea Of Fatness: Save Humanity Together Puzzle