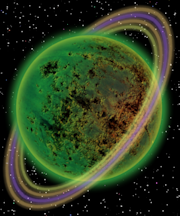 Depart your homeworld of Avalon to begin the longest journey ever attempted by mankind to find the end of the universe. What is at the end of the universe and where is the end of the universe? This is where your journey begins. Collect electronic data chips that are scattered about throughout universe to get the location of the end of universe. Journey through space and explore unlimited sectors, stations, and planet surfaces in this sci-fi adventure game. Take command of a large starship, it's shuttles, rovers and even crew! Interact with many ships from large capital ships to small fighter groups, some will help you, others will attack. Dock at stations to talk to other travelers and personnel, visit shipyards, or shops such as manufacturers, science labs, bars, casinos, academies and more. Fly shuttles down into planet atmosphere, land and use rovers to explore planet surfaces and even exit rover to explore on foot! On planets there are many things to find and discover such as resources, artifacts, lifeforms, alien creatures, ruins, facilities, and more. Features a full random creation system where no two games are the same!

• Interact with ships such as a prison cruiser, which will allow you to hire prisoners to train as crew, price is cheap but watch out they can cause troubles on board such as theft, murder, hijack, etc.

• Hire and train personnel for various positions on board your ship

• Dock and board space stations to do things such as meet people and aliens, buy or sell items, repair and maintain ship, visit science labs or other shops, and even gamble at a casino to win or lose big!

• Land on planets and explore their surface with shuttles, rovers and crew to find items and resources, search ruins, facilities, battle alien creatures and much, much more!

• Build structures on planets such as refineries, starports, agricultural domes and several other types of facilities for steady income or production

Note: This is the current features list. The game is early access and more features are to come! This game is being designed with expandability in mind. As a result there are extra place holders in certain areas throughout the game listed as coming soon.

These are just some things that I would like to add in upcoming versions as the early access version matures...

So even more cool stuff!

To promote Avalon: The Journey Begins and grow its popularity (top games), use the embed code provided on your homepage, blog, forums and elsewhere you desire. Or try our widget.

Take charge of a futuristic vessel, smashing your way through the galaxy in a desperate attempt to reclaim the Earth elements, stolen from you by the...

Two vessels in your service, your goal is to uncover the truth about your existence on the edge of the universe. On the journey through dozens of star...

Beyond Contact is a fiercely formidable survival game, inspired by the art and style of pulp science-fiction comics, the moral dilemmas of contemporary...

Rustclad is an adventure game where you explore the islands of a world to piece together a mystery that threatens your colony. It features real-world-sourced...

A little robot who’s been thrown out to the scrap yard behind the city must return and confront the Black Cap Brotherhood and save his robot-girl friend...