The game is a text adventure / visual novel that takes place in cyberspace. Naturally, the servers of this cyberspace are located on a deep-space satellite. The story begins with an investigation regarding the death of the satellite’s creator, and further develops into a much grander mystery. It has puzzle aspects. It has characters. A thrilling story. It’s small.

So. We completed the fifth act today, which is very much the largest act of the game, and contains an impressive amount of story telling. The act is a split act (user can choose 2 different routes through the story), and thus required double the effort. We're now on to Act 6, which will likely be completed much sooner.

Admittedly, Act 5 took a long time. But I didn't want to sacrifice quality for time. Here are some screens. 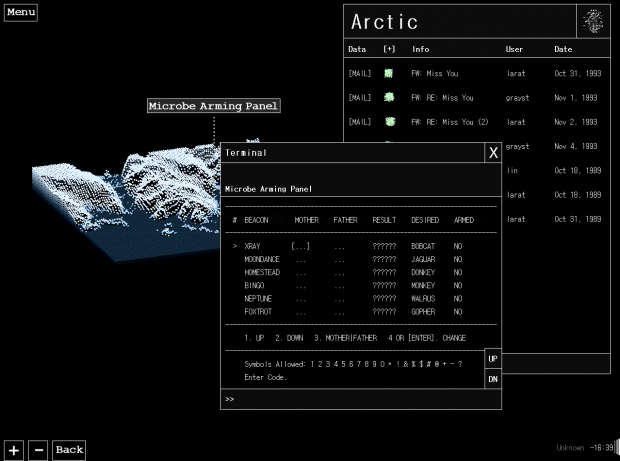 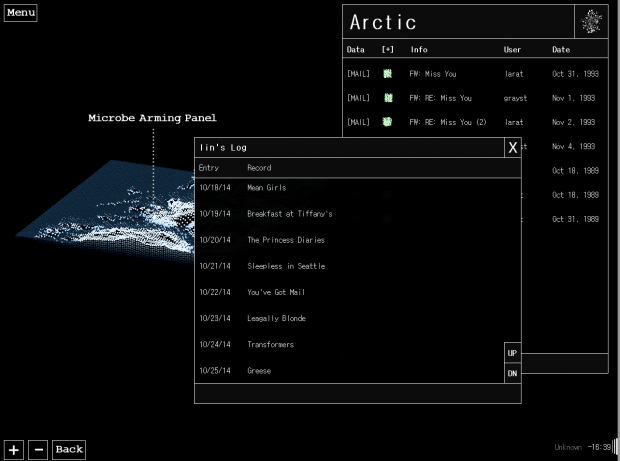 Back in the 80's Laura Tarlofsky wrote a little program called "Gene Sequencer". It's a little off the rails, but if you are trying to splice human and...

Anything can happen in cyberspace. Sometimes you encounter a flock of poisonous sheep.

It has been two long years since this game was announced in 2012. The servers had gone cold. But a soft blue light is blinking. The development robots...

Out alpha demo is now available for download. You can find it in the "Downloads" section of our IndieDB.com webpage.

The latest build of our alpha demo! Thanks for downloading! Released October 18th, 2012.

whale team u still out there?

Well here is something fresh and original considering the typical games released in the market today. The aesthetic is very cold and lonely, perfect for a game set in space. Really liking the visuals too! Keep it up!

Aw.. The game's release got pushed back again.
Ive been waiting for this in ages.

like myst? hell yeah! games like myst and riven are rare these days i kinda miss it...

Is this a graphical text adventure?

Yeah :) It is also similar to a visual novel, or a puzzle game - like Myst.

Hmm looks interesting, not 100% sure what exactly this is but i shall give it a shot and then give feed back!

sounds alot like these first text based RPGs that were ever created :)

Wow, i like this... but i dont know exactly why... But i like it. I think this wil be a great game yeah. Traking Neow!!!