The skies has no mercy. Defend the country of Ustio against an enemy that is smarter, faster and deadlier than any that have come before. Relive the events fifteen years prior to Ace Combat 5. Welcome to the dogfight of your life — The Belkan War.

This tutorial covers how to add some of the aircraft that were available in Ace Combat 5: The Unsung War but were cut from Ace Combat Zero: The Belkan War.

///Description:
This tutorial will explain how to add/restore some of aircraft that was available in Ace Combat 5 (Such as the Su-35, S-32, Hawk, etc.) to the aircraft roster of Ace Combat Zero: The Belkan War. As an example to show the modding method, we will add the MiG-1.44 "Flatpack".

More information about the required ISO file (taken from redump.org):

Create a folder and in it place the following files: the Ace5Zero PAC extractor/rebuilder scripts, the ACZ AIRCRAFT FILE ID text file and your ISO of Ace Combat Zero: The Belkan War:

Navigate to the BIN folder and copy the following files: DATA.TBL and DATA.PAC. Go back to where the scripts are located then paste both files there:

Run the Ace5Zero PAC extractor script then wait while the contents inside the DATA.PAC file are extracted. Once the extraction is complete the script will delete both TBL and PAC files and will place the extracted content in a folder called DATA. Copy this folder then paste in the same location again and rename it as DATA_backup. We'll use some of its files for later.

For this tutorial we will add the MiG-1.44 Flatpack to the aircraft roster of Zero. Download the file from ModDB's File section, place it along with the DATA folder and scripts then extract its contents in a new folder:

Delete the MiG-1.44 7z file if you want. Inside the aircraft mod folder you'll find the following content:

Navigate to the MiG 1.44 folder and copy both MIG144.DAT and MIG144_HANGAR.DAT, return to where the Ace5Zero PAC extractor/rebuilder scripts are located and paste them there:

For this tutorial we'll place the Flatpack over the J35J Draken, which is one of the starter planes in the game. Open the ACZ file aircraft ID text file and scroll down through the text:

You'll see that there are five J35J Draken entries! Why is this you might ask? In Ace Combat Zero there is a total of 36 aircraft available for use to the player. As you progress with the game you can unlock up to five or six extra liveries (or COLOR as the game calls them) for each one of the available aircraft. Due to the way the game's data is organized, every aircraft is stored in two separate self-containing archives that have the necessary assets (such as models, textures, sound effects, aircraft parameters, etc) for the game to load it successfully. The first file is used for gameplay during missions and the second file is used for displaying the aircraft in the hangar during aircraft selection.

Each COLOR is a separate aircraft of its own, meaning that for example, the STANDARD COLOR of the J35J Draken has its own files (both for gameplay and for hangar), the MERCENARY J35J Draken COLOR also has its own, so does the SOLDIER J35J Draken COLOR, and so on. Basically, every COLOR available for an aircraft (STANDARD, MERCENARY, SOLDIER, KNIGHT, SPECIAL and PIXY/PJ) will have its own set of files. These files are almost the same, the only difference between them being the texture file used as the aircraft livery.

So to add our custom aircraft mod, you will need to give up a COLOR of the five that are available for the J35J Draken. For this tutorial we will place the MiG-1.44 over the Draken's STANDARD COLOR, so check the ACZ aircraft file ID text file and look for the J35J and STANDARD keywords under the AIRCRAFT and COLOR sections:

With this we have successfully added the MiG-1.44 into the aircraft roster of Zero. Now what's left to do is to rebuild the ISO file.

Open the folder where the contents of the ISO were dumped to then drag 'n' drop the files inside it on the CDVGEN windows in the following order shown below: 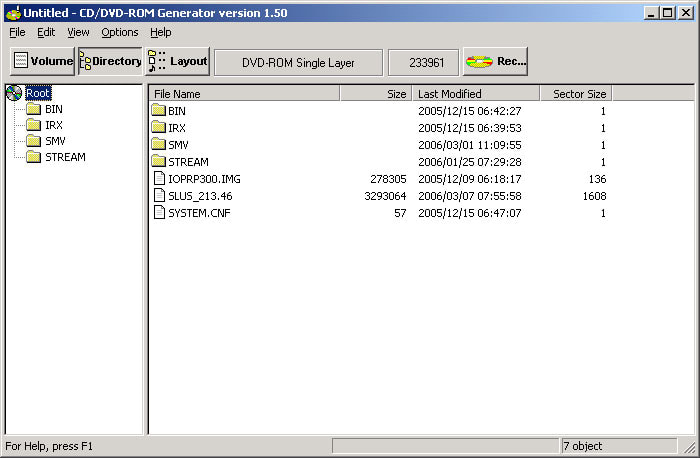 It's important that you respect the order of the files because otherwise PCSX2 won't read the ISO file.

Now click on the Volume button (the one next to the Directory one) and a form will appear. Configure yours in the same way as shown in the picture below: 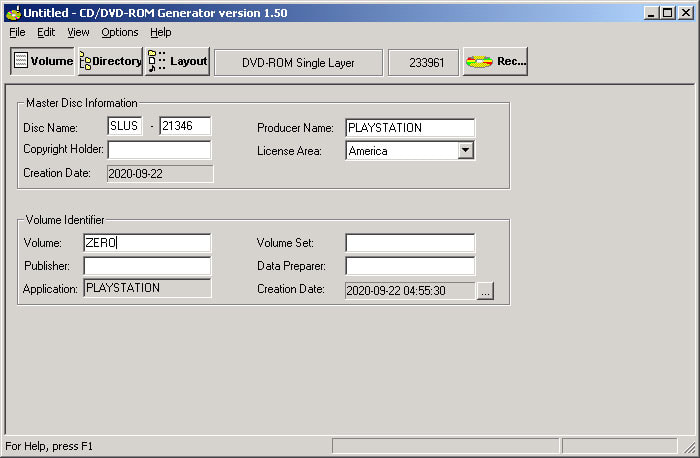 Once the form is filled, go to FILE > EXPORT IML FILE and give the IML file a name. I'll be using ACZ as the filename for this tutorial. The file saving location doesn't matter as long you remember it.

SAVING THIS TEMPLATE FOR FUTURE USES:
To avoid doing the process of adding the files from the folder where you extracted the contents of a ISO and filling the form every time we want to create a new one, go to FILE > SAVE, give the template a name and click OK. The tool will save it as a *.CCZ file.

The next time you have moved the newly created DATA.PAC and DATA.TBL files back to the BIN folder, for this step just open the program, click CANCEL when asked to create a new project then load the CCZ file. CDVDGEN will remember the location of the folder with the contents from the ISO and update the files to the most recent ones.

Remember that you can use this template as long the location of the folder with the extracted ISO contents remains the same. If you moved the folder location or renamed it then you will need to generate a new template with the updated folder path/name.

Run cdvd_iml2iso, click on the folder icon with a green arrow on it and load the IML we previously saved: 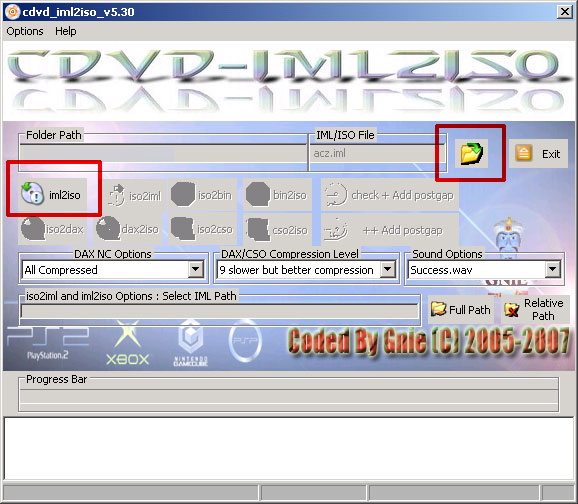 Click on the iml2iso button then select a save path. The program will then begin to create a new ISO. Once the process is complete a jingle will play, meaning that the program is done rebuilding the ISO file. It will saved using the same name as the IML file.

Load the ISO file with PCSX2. If you followed the steps correctly the MiG-1.44 will be available in the J35J Draken's STANDARD COLOR slot: 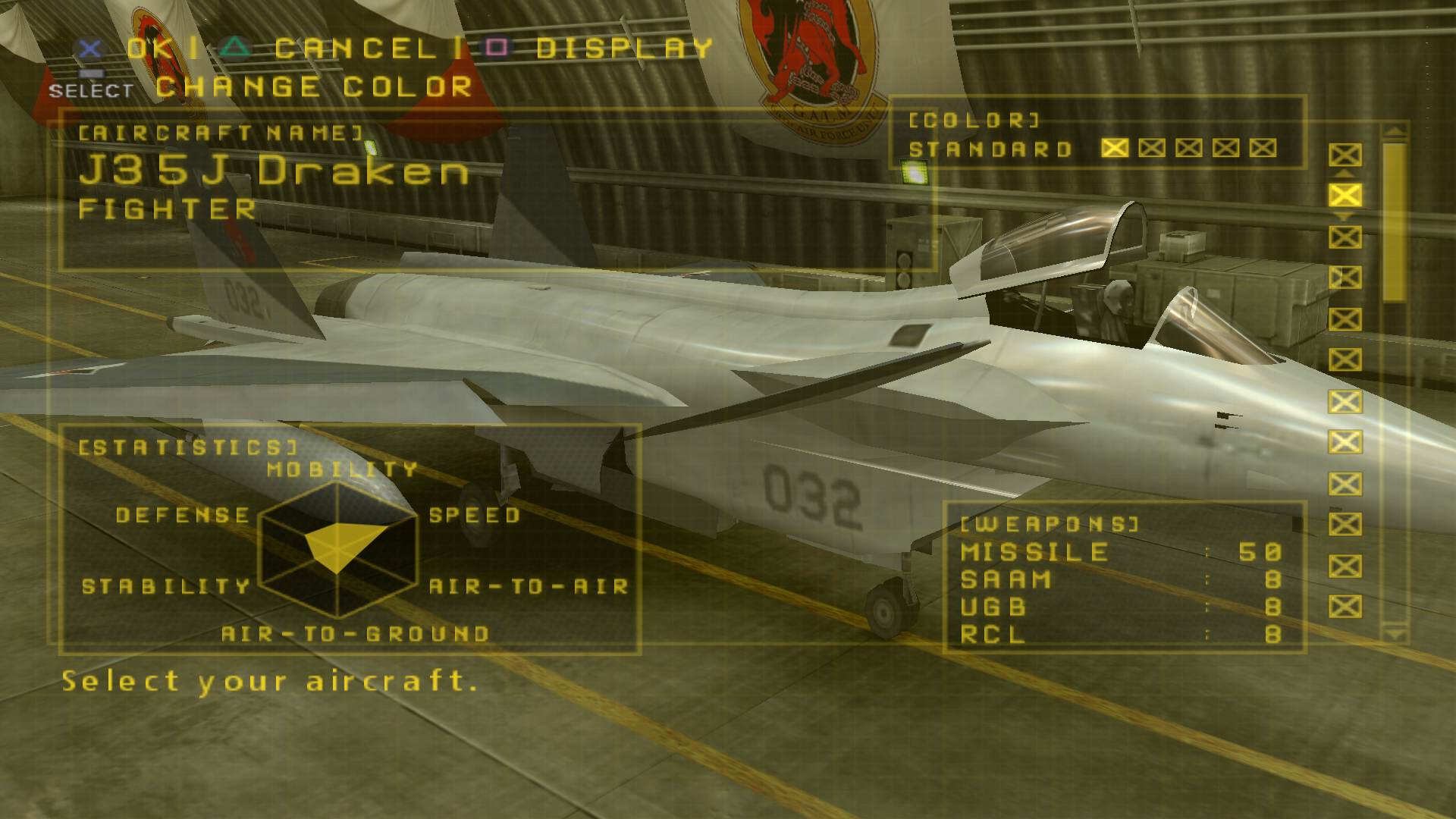 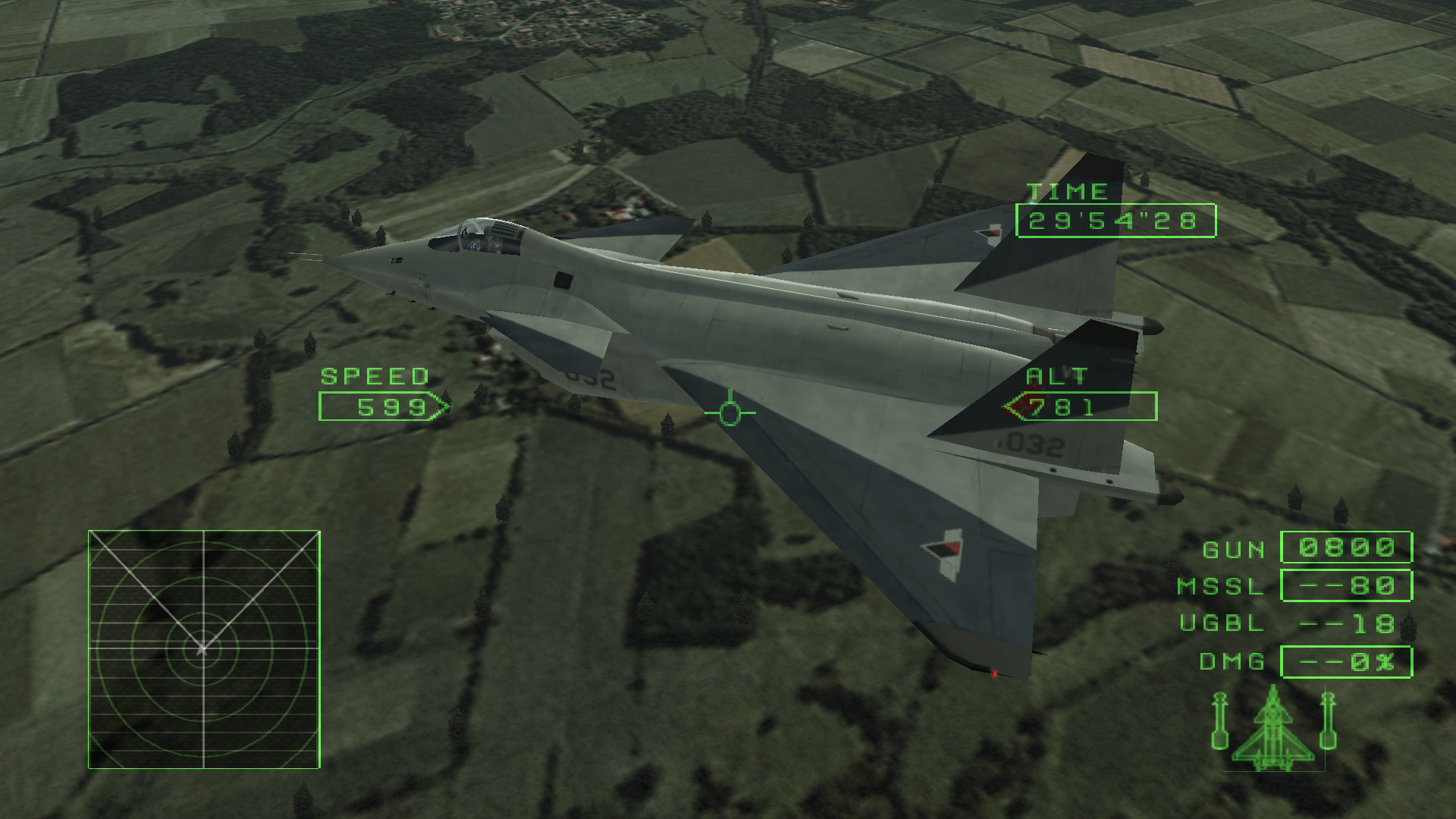 And this marks the end of the main part of the tutorial. You can safely delete the IML and IMS files that were create with the ISO file.

In case you want to restore the default J35J Draken with the STANDARD livery (or any other aircraft that you have replaced with the ones from AC5), the process is quite simple:

If you remember early in the tutorial I told you to make a backup of the DATA folder that was created after executing the Ace5Zero PAC extractor script. So basically you will need to copy the Draken's STANDARD COLOR files (0498.dat and 0720.dat files) from this backup folder (DATA_backup) and paste them in the DATA folder.

Just click to Yes to the ovewrite confirmations and continue from STEP 4 (specifically from the part where you need to run the "Ace5Zero PAC rebuilder" script).

///OPTIONAL STEP 2: CHANGING THE DEFAULT LIVERY OF THE AIRCRAFT MOD

Every aircraft mod release comes with some custom liveries, courtesy of BelkanLoyalist. If you want to apply them to the aircraft mod, then follow these steps. Remember that you will need to do this BEFORE copying the files and renaming them.

Navigate to any of these folders, click on one of the subfolders containing the livery you want to add, then copy the GIM file inside it. Go to the MiG 144 folder and paste the GIM file there. Run the GIM injector for the MiG 144 script file and you'll be asked to type the name of the GIM file to inject. Type the file name of the one that we copied and hit Enter. The script will copy the GIM file and paste in on both DAT files, where the aircraft livery texture is located. Now you can continue from STEP 3, in the part where you need to copy both MiG144 and MiG144_HANGAR files.

-When replacing an aircraft with another, does this mean that the replaced aircraft will not longer available?

Yes and no. Like I explained earlier in the tutorial, every aircarft is stored in two self-contained files and every COLOR available for that aircraft are stored in separate files. You can think of every COLOR available for any aircraft as a "slot", so we placed the Flatpack on the STANDARD slot of the Draken. The Draken will be still available, just not the STANDARD livery variant of it.

The Draken will not be truly longer available if you replace all of its available COLORS with the MiG-1.44 (or any other aircraft).

-Does placement matter when adding an aircraft mod (i.e you will need to place the S-32 in the Su-47 slot since both planes are related)?

It doesn't, you can add your aircraft mod in any of available COLOR slots without problem. You can even replace the ADFX-01 "Morgan" with the S-32 if you want for example.

-Can I add multiple aircraft?

Yes, you can. Just copy and rename the aircraft mod files with the filenames of the aircraft to replace in Zero then drop them in the DATA folder. Remember that every aircraft in Zero has up to five (six if replacing the F-16C/F-16C) "slots" available to mod your custom aircraft in.

-Is there any other way to add the custom aircraft other than replacing the existent ones?

There might be one way, but sadly I haven't figured it out yet.

-I added a custom aircraft mod but when selecting it in the hangar the game still displays the name and description of the aircraft that was replaced!

Sadly I don't know how to edit the game's strings yet. Sorry about that.

Yes, this is intentional. I will not bother going into the specifics of why does this happen but the gist of it is that the aircraft models from AC5 can carry only one Special Weapon (SpW). Leaving the second/third SpW options enabled will cause problems if they are selected, so for compatibility reasons they will remain disabled until a solution is found.

-During the Special Weapon selection the game will still display the ordnance of the aircraft that was replaced as well their HUD graphics!

I don't know to swap hangar weapon models or edit HUD graphics yet. Sorry about that.

And this concludes the Importing aircraft from Ace Combat 5: The Unsung War tutorial. The process is quite simple but I believe it can be difficult to follow due to grammatical errors (I'm not a native english speaker and I had a lot of difficulty writing this tutorial). If this is the case, feel free to post your questions.