The Japanese myths of Tsukumogami come alive in a Puzzle RPG - winner of the Eclectic Indie Dev Grant.

Released in Japan in August 2012, 99 Spirits is the first RPG produced by the indie game circle TORaIKI, and is currently being localized for English speaking audiences to be released on Windows PC in early 2013. The game features an original battle system where players will have to puzzle out the true identity of the enemy before defeating them. 99 Spirits revolves around the real Japanese legends of Tsukumogami, where everyday objects come alive on their 100th birthday.

Features:
- Over 10 hours of playtime in an RPG that mixes intense puzzles with fast paced action
- Work out the true identity of your enemies in a unique battle system
- Capture enemy spirits and turn them into allies
- Interact with over 40 unique characters that impact your journey
- Battle over 100 monsters and master a vast variety of skills
- Maintain your equipment and combat hunger as you traverse different regions
- Beautifully detailed art and an atmospheric original soundtrack bring feudal Japan alive
- Dual audio: Toggle between English and Japanese voice

Story
Hanabusa is a young headstrong girl living in the Heian capital within medieval Japan. But when her mother is slain by evil spirits, her life turns into one of vengeance as she sets out to hunt and destroy the spirits.

During Hanabusa’s travels, she meets a white fox who turns out to be a servant of the mountain god. Hanabusa receives a special sword passed down from her mother, which gives her the ability to see the true forms of spirits to help slay them. Shortly after, a spirit claiming to be Hanabusa’s long-lost father, Hidetada, breaks her sword and leaves Hanabusa powerless and confused.

Now to mend her broken sword and learn the truth about her father, Hanabusa embarks on a journey to annihilate every last one of the evil spirits. 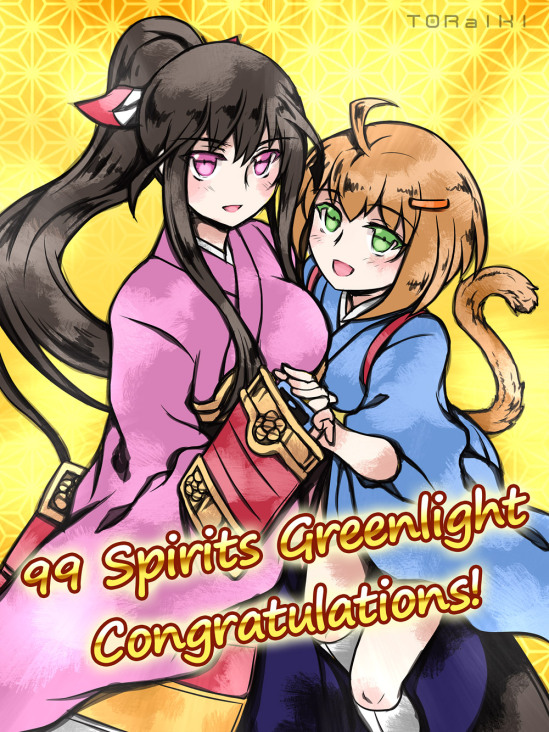 Yesterday 29.10.2013 Valve announced a larger than usual batch of new Greenlit games, and to our great joy, included was our first game to make it onto Steam – TORaIKI’s brilliant puzzle RPG ’99 Spirits’!
In the coming days and weeks we’ll be focusing on making the game available on Steam.

This is all thanks to everyone’s continuous support, and we couldn’t be happier for it.

5 great Indie games never bundled before including Electronic Super Joy and March of the Eagles.

Fruitbat Factory's second title, 99 Spirits, has just made its worldwide English release. Released in Japan Fall 2012, the first RPG produced by the Japanese...

99 Spirits Demo is now available for download on Desura! Check it out and let us hear your thoughts.

Check out Fruitbat Factory's puzzle-RPG in this demo.

erm.. 99 Spirits has been launched in Steam, do I get a code for the steam version?

I was gonna ask the same question

Like all steam addicts here probably ;) It will take some time i guess.

posted on steam greenlight page:
"echoMateria [Fruitbat Factory] [autor] 13 Lis - 1:41
People who participated to the IndieGoGo campaign or purchased the game from our store or IndieRoyale will receive their keys soon.

The process for their distribution has started, it should be done in a day or two."

Good to hear that.

Due to popular demand we added Steam keys to all copies of 99 Spirits everywhere, not limited to those above listed anymore, so you should all get a key as soon as they add them. Gotta love contradicting myself. ;)

The game engine (which we cannot modify) seems to have problems with some non-English system locales - Korean, Greek and Thai in particular. If you recognize yourself on the list, we recommend trying to play the game with AppLocale, or setting your system locale to English. Really sorry about the trouble!