Ten years ago the world was introduced to the most thrilling video game ever developed: 1 Monster Truck vs. 61 Children! Now a decade later, from the developer of the original, comes an HD remake with more action packed gameplay, more (any) customization and some semblance of a scoring system, and support for up to 8K resolutions! You will not want to miss 2020's second most anticipated, second least finished on release and second longest time in development title: 1 Monster Truck vs. 61 Children HD!

The "best" game in history just got better!

It's been a crazy decade!

Can you believe it's been an entire decade since 1 Monster Truck vs. 61 Children first released to the public on ModDB? Neither can I! In that time so much has changed. Technology has moved by leaps and bounds, politics has gotten even crazier and I've gone from being a highschool freshman writing shitty computer games to an educated adult holding down a good job while writing shitty computer games! Now, let me tell you all about what's new!

Things were much simpler a decade ago, and that includes 1 Monster Truck vs. 61 Children. With it's simple Game Maker 8 sprite editor graphics, a screen of text telling you to destroy your spacebar and a binary win/lose system. This HD remake adds a lot of cool features to the mix while maintaining that classic vibe.

The most notable improvement is the graphics. The game is now mastered targeting 8K, scaling down to fit your monitor. That means even them rich bois with their next-get monitors can take full advantage of them while playing this masterpiece! As well, graphics have been rendered in Microsoft Paint to give them a cartoonish effect, reminiscent of what the original game should have been. I'd like to share a couple of images demonstrating just how far we've come! 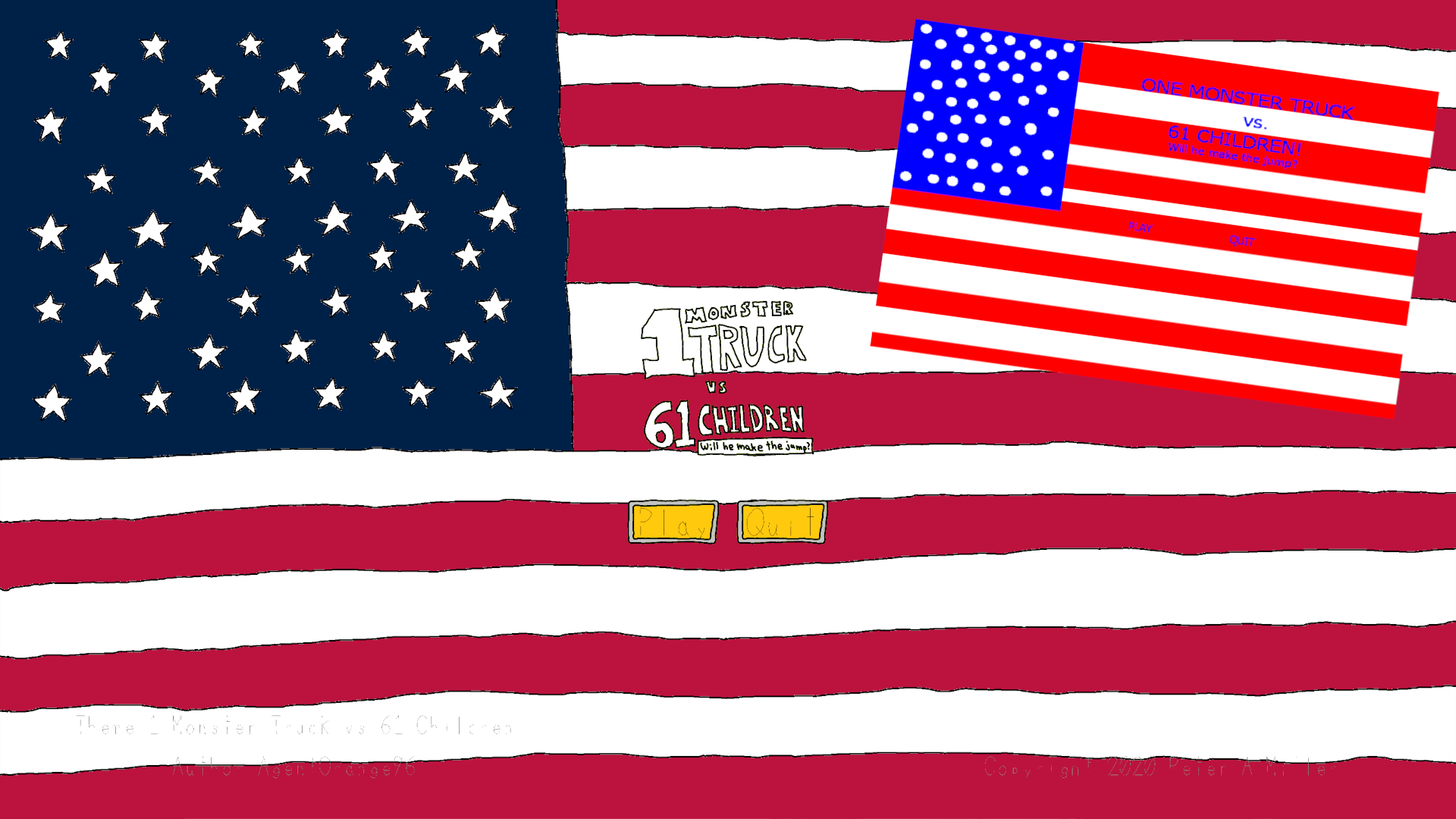 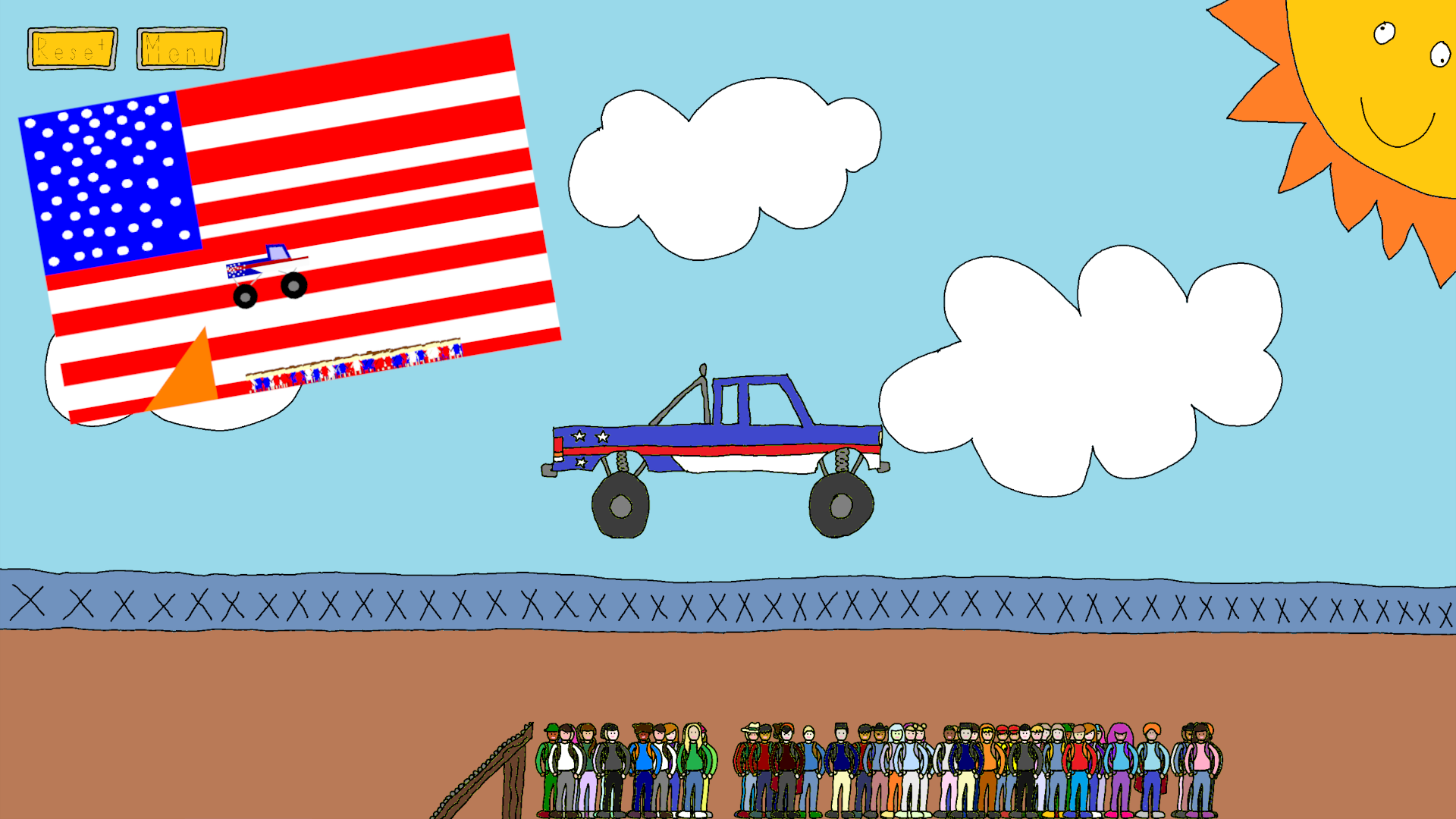 This is not your grandfather's 1 Monster Truck vs. 61 Children! But boy does he wish it was!

While the original game had a binary win/lose structure, this remake is a lot more granular. This game implements a [very] rudimentary physics engine which means how far the monster truck jumps is truly dependent on how much you're able to charge its engine in one minute! As well, each child is independent from the rest meaning there could be anywhere from 0 to 61 survivors. It's up to you to keep these children safe!

1 Monster Truck vs. 61 Children HD was built with customization in mind. Not only is every sprite and background a .png image easily modifiable in Microsoft paint, but positions of the props can also be tweaked as well as parameters such as the max speed of the monster truck and how much each whack of the spacebar charges the engine.

Editing sprites doesn't just affect the looks though. By modifying the sprite shape, you will directly impact how the game plays. You could make your jump steeper or shallower and see what happens, or make the children shorter if you'd like, lowering their hitbox. The possibilities are endless!

As well, all text/messages in the game (aside from the copyright notice) are completely customizable. This allows for translation into other languages or more appropriate wording for whatever theme you may create. Which brings my to another exciting point!

You don't need to overwrite anything! Different themes can be selected allowing multiple themes to be installed at once! I'm super excited to see what people create!

This game is probably slightly less anticipated yet slightly more finished than Cyberpunk 2077. And it may have taken slightly less time from initial announcement to fruition. So there's some more work to do. Here is a list of planned improvements to name a few:

Thank you to everyone who has enjoyed the original, taken an interest or otherwise decided to check this game out! It's much appreciated!

The installer for this game is available for download here. Thank you!

This is the initial release for 1 Monster Truck vs. 61 Children. Improvements will be made in future releases.