This series of articles is going to showcase the weapons used by both sides during the invasion that are going to be featured in the mod.

After a long hiatus in the series I'm back for a final installment on the subject of the rifles used during the invasion. In this article I'm going to tackle the Springfield 1903 and the M1 Carbine and its variants, used in the events of the invasion.

The M1903 Springfield is a american bolt-action rifle, developed in the end of the XIX century and adopted by the US Military in the beginning of the XX century. It's based on the Mauser m1982 design and fires the .30-06' caliber bullet. It saw service with the US Military in WW1 and WW2.

Like many other US weapons from WW2 it was widely exported both during the war as part of aid programs to allied countries and after the conflict as surplus material. It's likely that many Springfields ended in Cuba either as aid to the pro-American Batistagovernment or smuggled to the revolutionary rebels.

Both the Cuban Revolutionary Armed Forces and the 2506 Brigade used the rifle, specially in the sniper role, since it was already obselete as a main infantry rifle when compared to Garands and Johnsons avaiable, and speccially against the FN-FAL and AK-47.

The M1 Carbine is a lightweight small rifle that fires the intermediare .30 Carbine round. Its was developed for the US MIlitary during WW2 to complement the full sized M1 Garand. It was originally designed as a weapon for vehicle crews and rear line troops, intended to give more firepower to troops that would normaly only carry a pistol.

However the M1 Carbine proved effective as infantry weapon in many roles, it saw front line use by paratroopers and other soldiers that need something between a rifle and a submachinegun. After WW2 the weapon was exported as surplus to many countries, including Cuba. During the Cuban Revolution it was used by both government troops and the revolutionaries.

Many different versions saw use in Cuba during the Bay of Pigs events, among them we have the M2 Carbine (a select fire version), and the paratrooper version (that had a folding stock).

The M1 carbine was a semi-auto Carbine, it was magazine feed and had 15 and 30 round magazine avaiable. 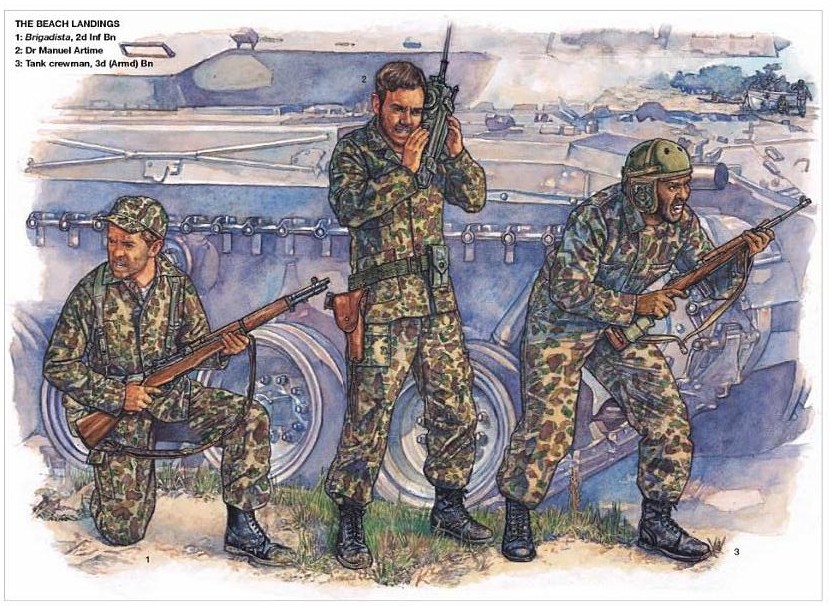 In the next article I'm going to start adressing the Submachineguns used by both sides, like the Thompson and the Sa. 23.