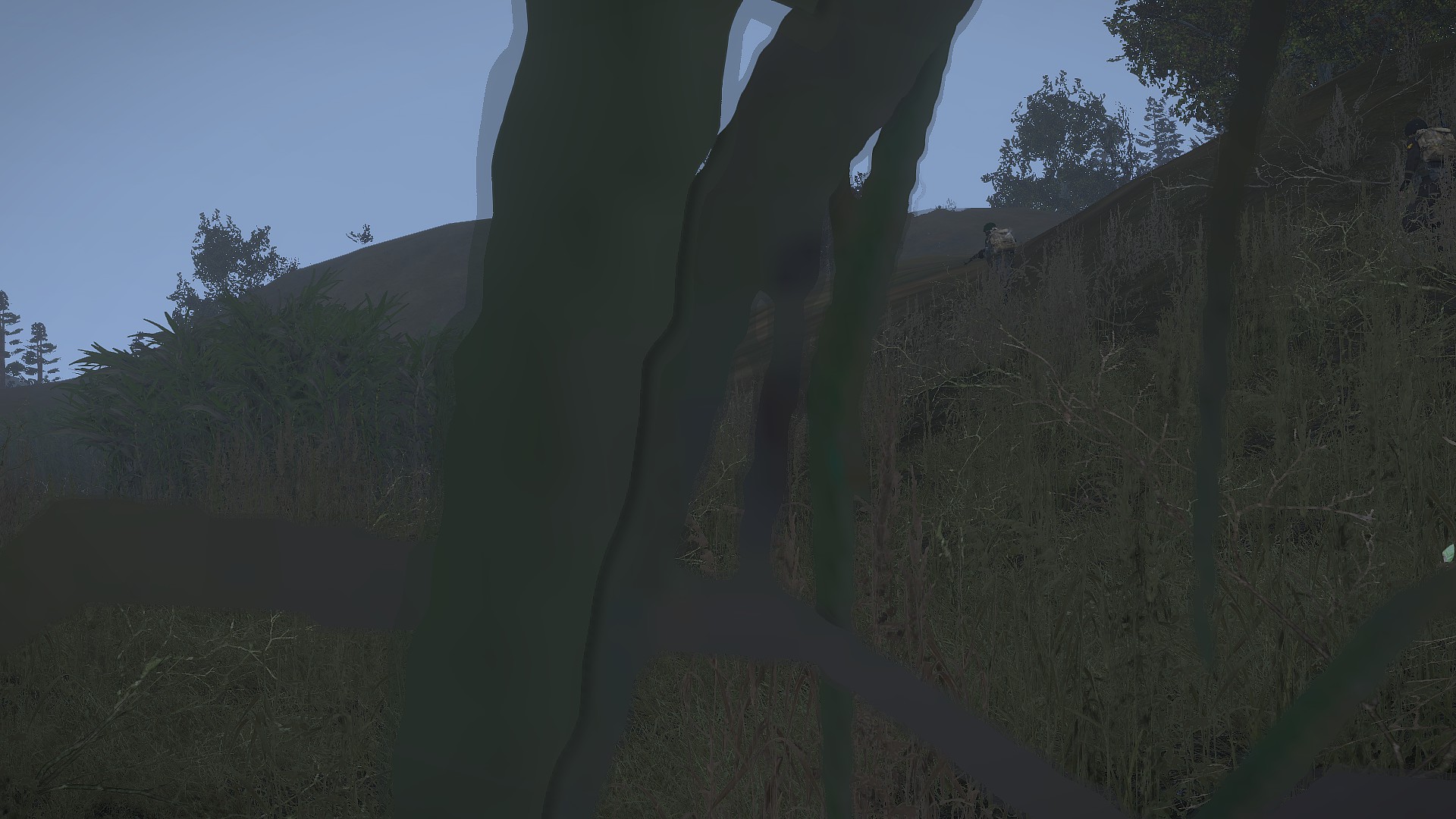 .... I hid in the grass, trying to regain my stamina.
In the fading blue of the evening twilight I saw the Stalkers who were standing outside the bunker, the guys in the grey camouflage, traveling quickly up the slope after me. They passed me up, and disappeared over the hill.
I took a second to laugh and get a drink of water, and just as I was feeling like I had got away - I see the guy with the green helmet, walk back over the hill and look right at me.
I immediately went prone and cursed to myself.

He had seen me!
Soon he was barking at me in Russian, and I was being scooped up by the military guy... Handcuffed and taken down back to the bunker.
I was pretty tired, again, just escaping after reaching the level of frustration to drive me to try to run in the first place... I lost my cool.
I started swearing, just overall angry at being a prisoner and not having any weapon - meanwhile everyone is armed to the teeth....
They didn't understand any of my English ranting I'm sure, but soon my Military escort was trying to calm me down, telling me to relax.
In no time at all, I was in the tiny metal room again. But this time I was in there with 2 of the guys who were wearing the grey uniforms, one of them was the man with the Green helmet. 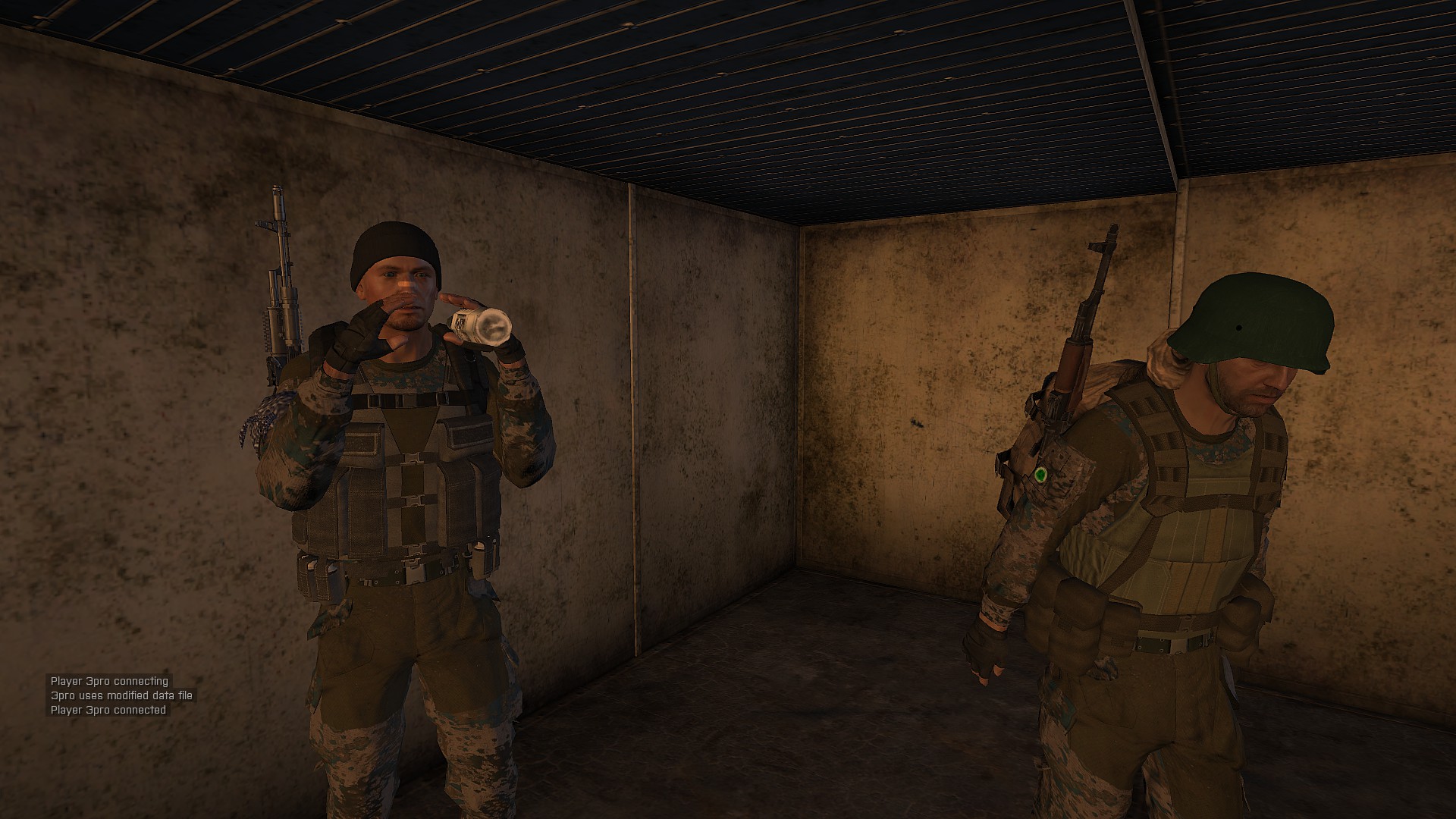 The other guy was speaking English to me, and I soon learned his name was Язык - the Russian word for "Language" or "Tongue" ... Язык told me that now - the scientists were not going to let the three of us go.
He explained that before - they were not allowed inside the compound due to some group formality. It was now it was dark he explained, and the Scientists - in their parent-like wisdom over the lowly stalkers - we not going to allow us to leave until morning, some 2 hours from now after server restart. Many players were online and I had seen many names in the list, even some of the ladies in the ArmStalker Community, many of whom play roles in the Scientist faction. Soon we were joined by two of them, one was pretty obviously a woman by her voice.

She was wearing a tanker's leather helmet (perhaps to take the place of long hair style, or to hide the head and neck), and a face mask, with a customized face texture made by an artist in our community who offers his services to design face textures for use in ArmStalker. Players can receive this file, or indeed create their own, and place it in their game directory. When they log into the server, we all see this texture on their face... This player by appeared to me to be "Eva Mayor"... I did not want to try to interact with her character in game, to see her Identification - because it really didn't matter but more importantly, sometimes they will be notified that a player has checked them out. This all depends on the mission, and I couldn't remember the key command to "fistbump" a player much less how it all works specifically with ArmStalker... But I know enough to know that it tells you their name.
Eva - from what I have seen in my time with the community only - is someone who has been playing ArmStalker for a very long time, at least as long as I have been following ArmStalker. I think at the moment she leads the Scientists, I have seen her with the teamspeak group leader tag in the last couple months. She also at one time went missing i guess, in the server at some point ...and worked with the monolith or some other interesting stuff... 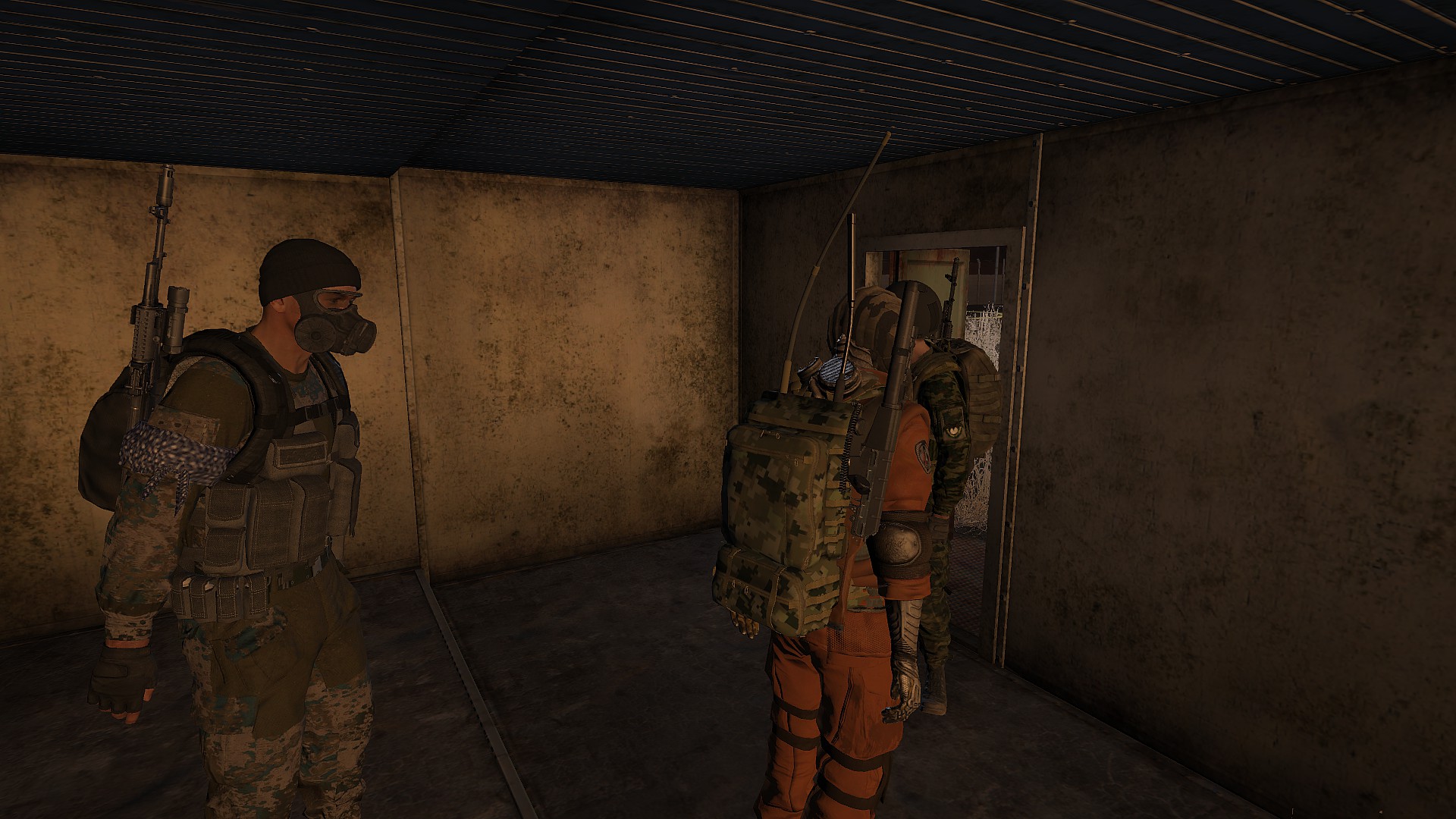 Well - she and her assistant seemed pleasant enough. They laughed, and gave us cigarettes and vodka, all 4 or 5 of us in this little room with the door closed partying like teenagers in some apartment - meanwhile, the vastness of the Zone was out there... live... dozens of kilometers, hundreds even...

Since the start of my time following the project in late 2015 the Team have planned to create female avatars, or player character models, so at some point they will all be able to have bodies that look a bit more feminine as well, to go with the custom face textures. Another cool touch that should help ArmStalker to distinguish itself from Arma 3 and the many other mods out there.
The scientists were relaxed, chatting, asking me questions, having me repeat Russian words and Phrases and then cheering in approval when I would repeat them. Soon, we were back outside, in the night air with the UN guards and the stalkers, Scientists, and these other guys... who I was calling "Blue Guys" due to the fact that my Character had not been introduced to Чистое Небо, aka Clear Sky. 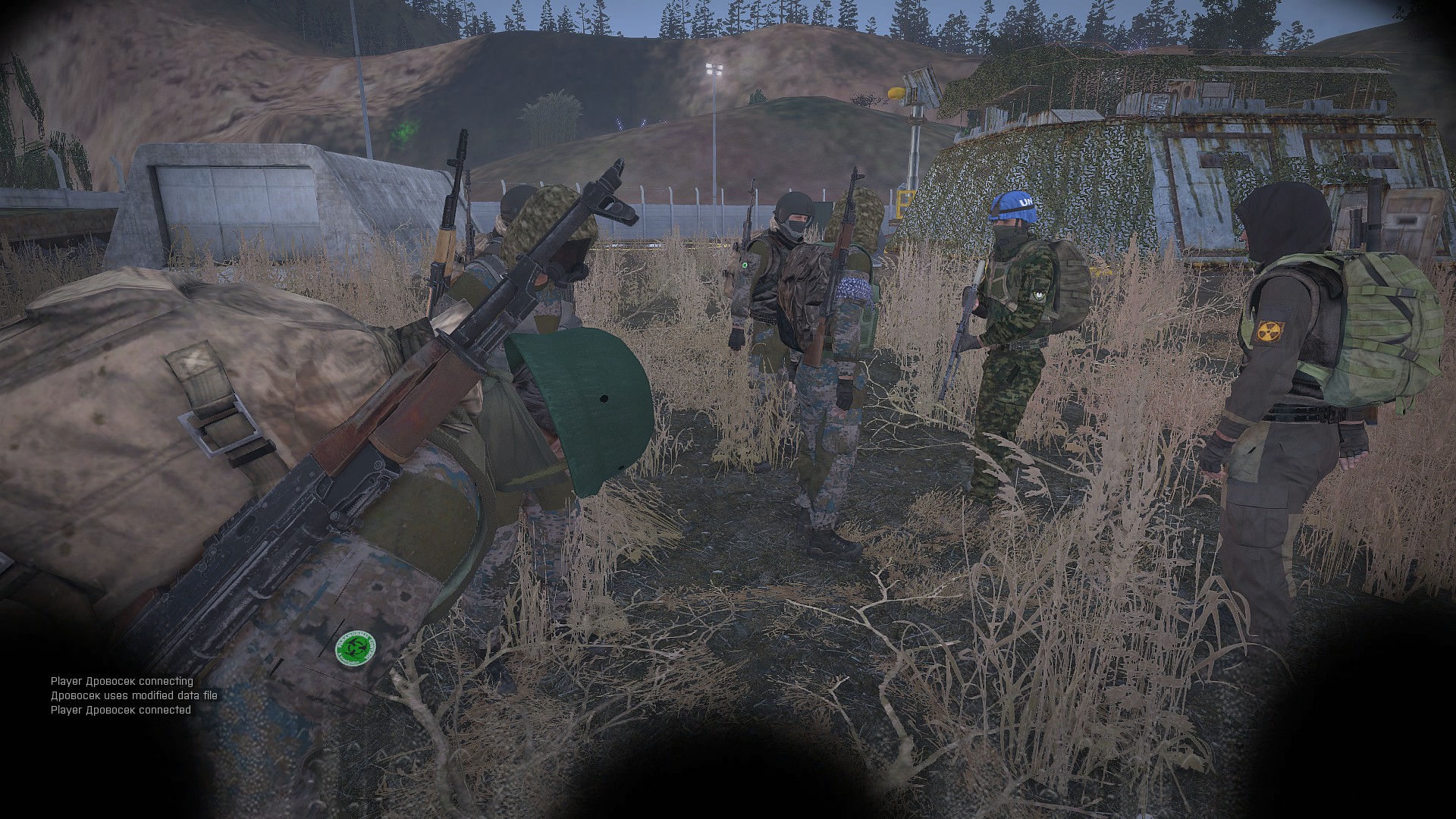 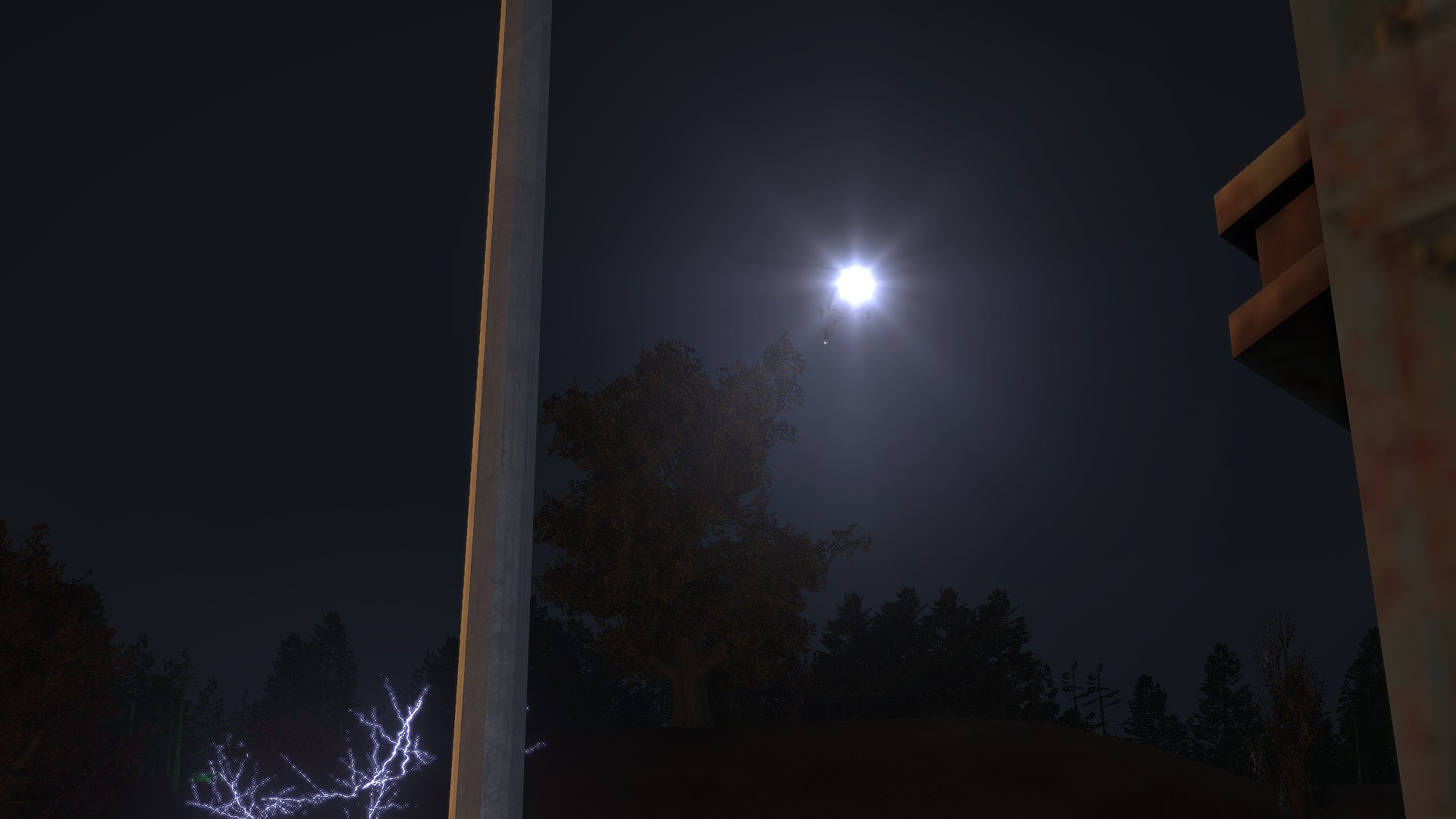 Soon a helicopter roared into the airspace above the bunker, searchlight on, it started descending and landed, while all of us clamored around the camp and out to the landing zone to see. 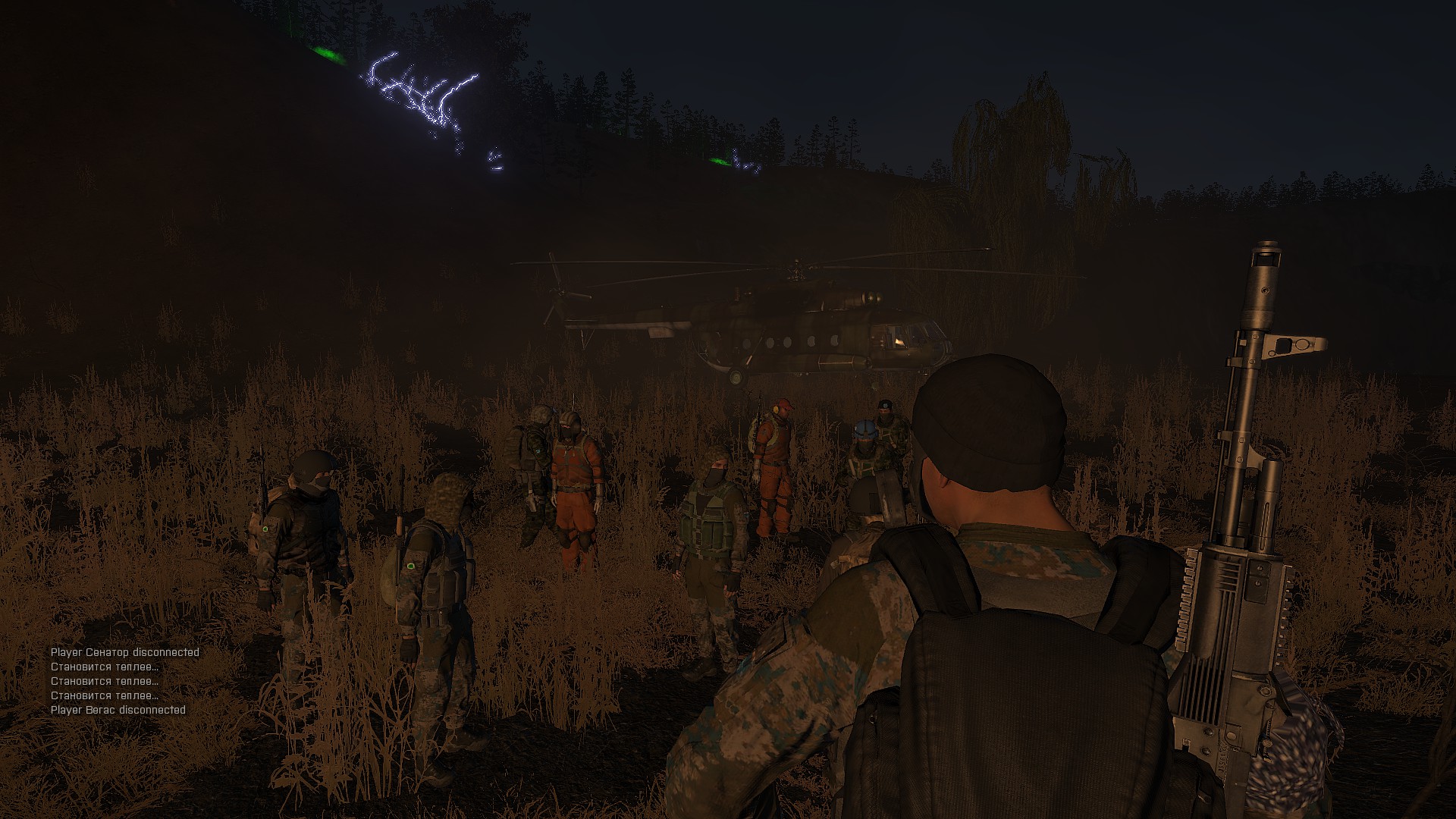 The rotors never stopped, some supply drop I suppose, because soon the bird was airborne again, disappearing back over the hill to the North where it came from. It seemed like the night had just got started after the nice social turnaround, but soon it was time to log off for the server restart. 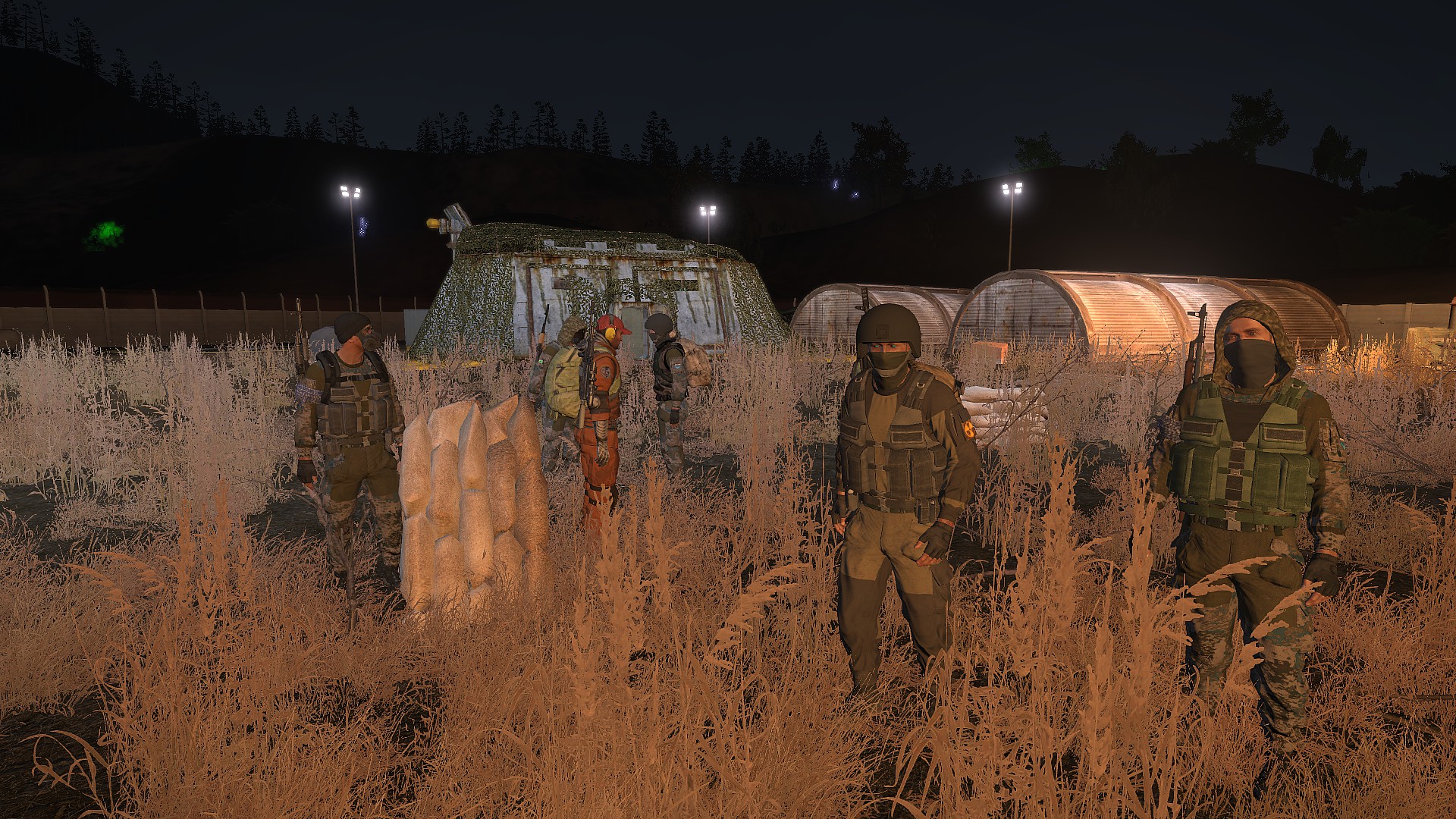 Check this video out to see Our time after restart, including an attack on the Bunker by some dangerous creatures!!!

Thanks For Reading!
Join me next time when we strike out into the Zone into the Dangerous North, on a mission with Clear Sky!