Walk in the Dark part 5 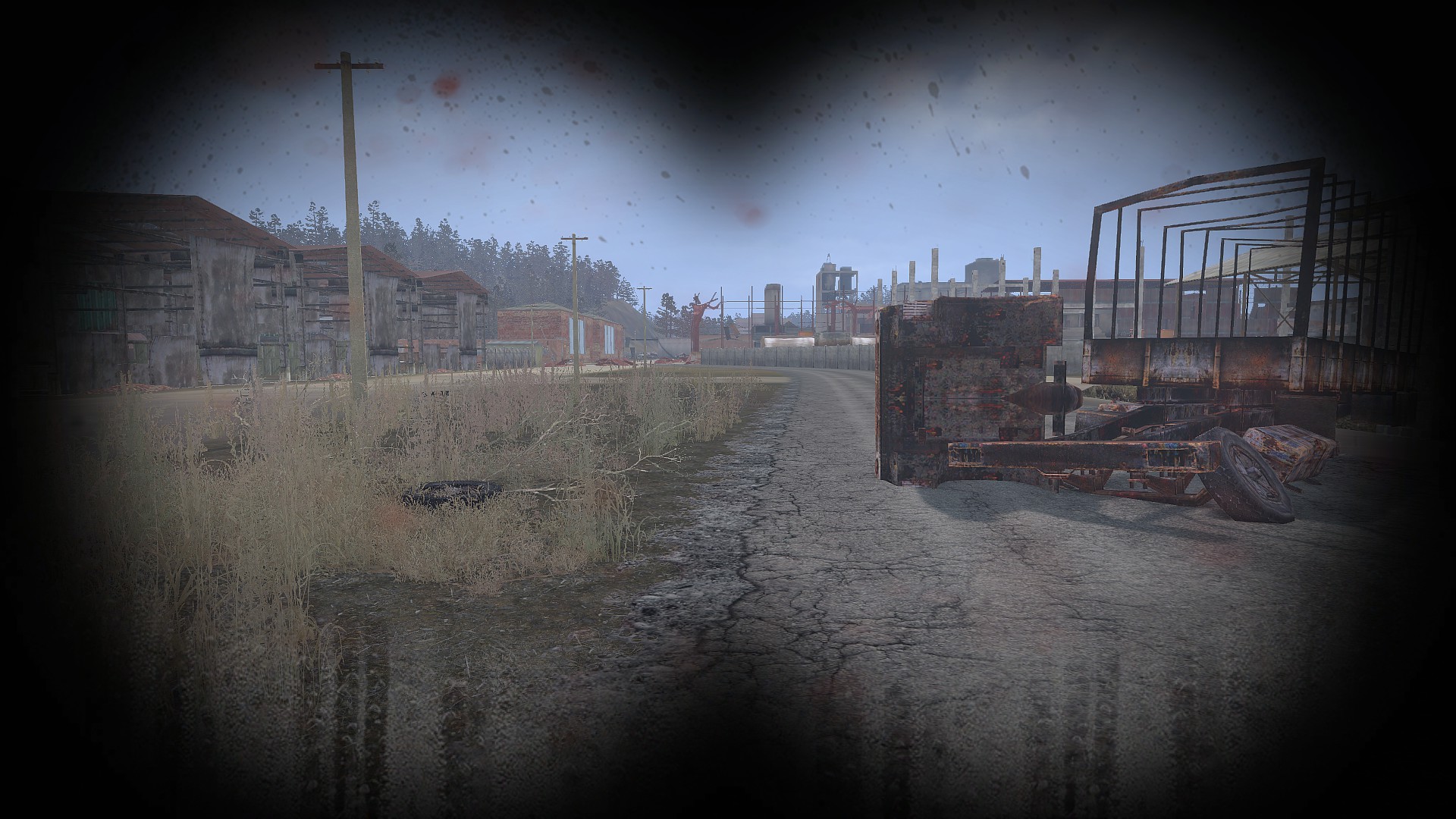 I had ran back to Rostok.
Emptyhanded, with only a tattered gasmask that I spawned with....
I ran back to the bar at Rostok, and logged out.
I needed to log in when there were lots of players, I needed help. 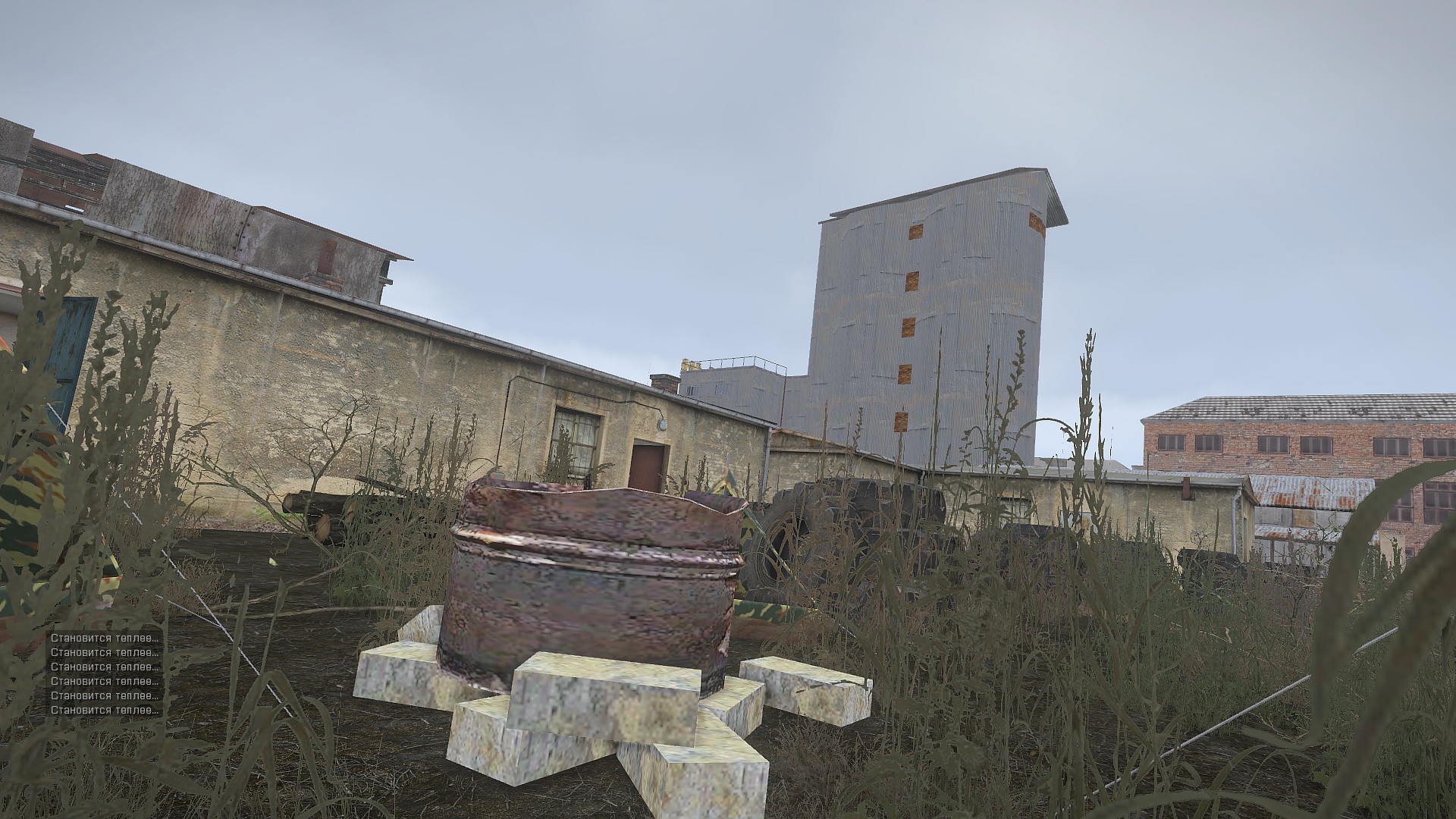 I logged in and got help from Duty as you can see in this video, they were very courteous, but almost too polite...

I was being watched very closely. Across the courtyard was a shack like the one they led me to in the video, the door was open and I could see a stalker in black clothes... it looked like legend clothes, the uniforms often worn by Dark Stalkers - the sort of demi-gods of the server. This guy was talking on his radio, side stepping out of view and back into view.... I was soon given a backpack, food and water, and a GP100. The Duty guys were getting together, all 8 or so of them, and they explained that they were going to take me to the bunker. 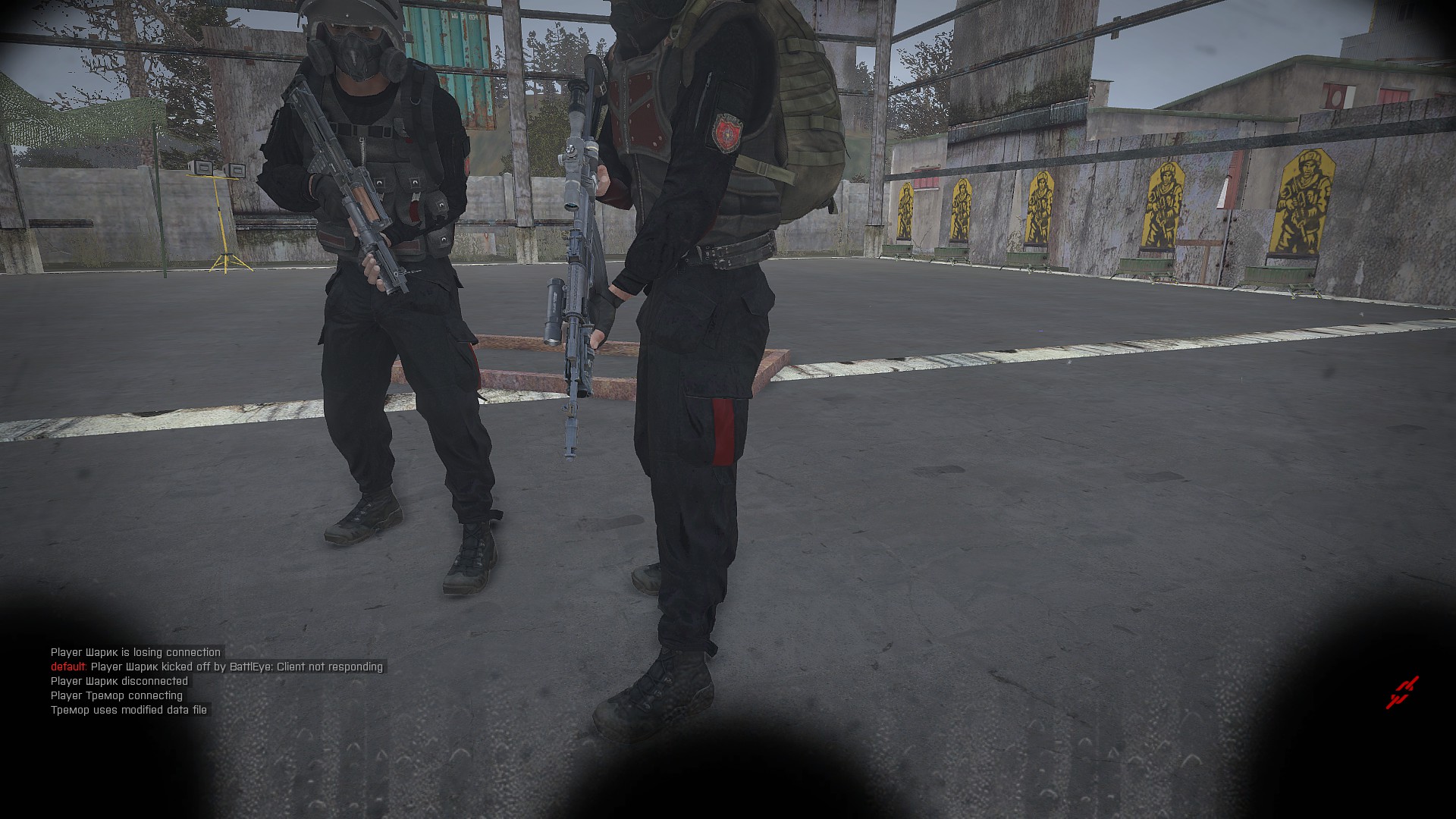 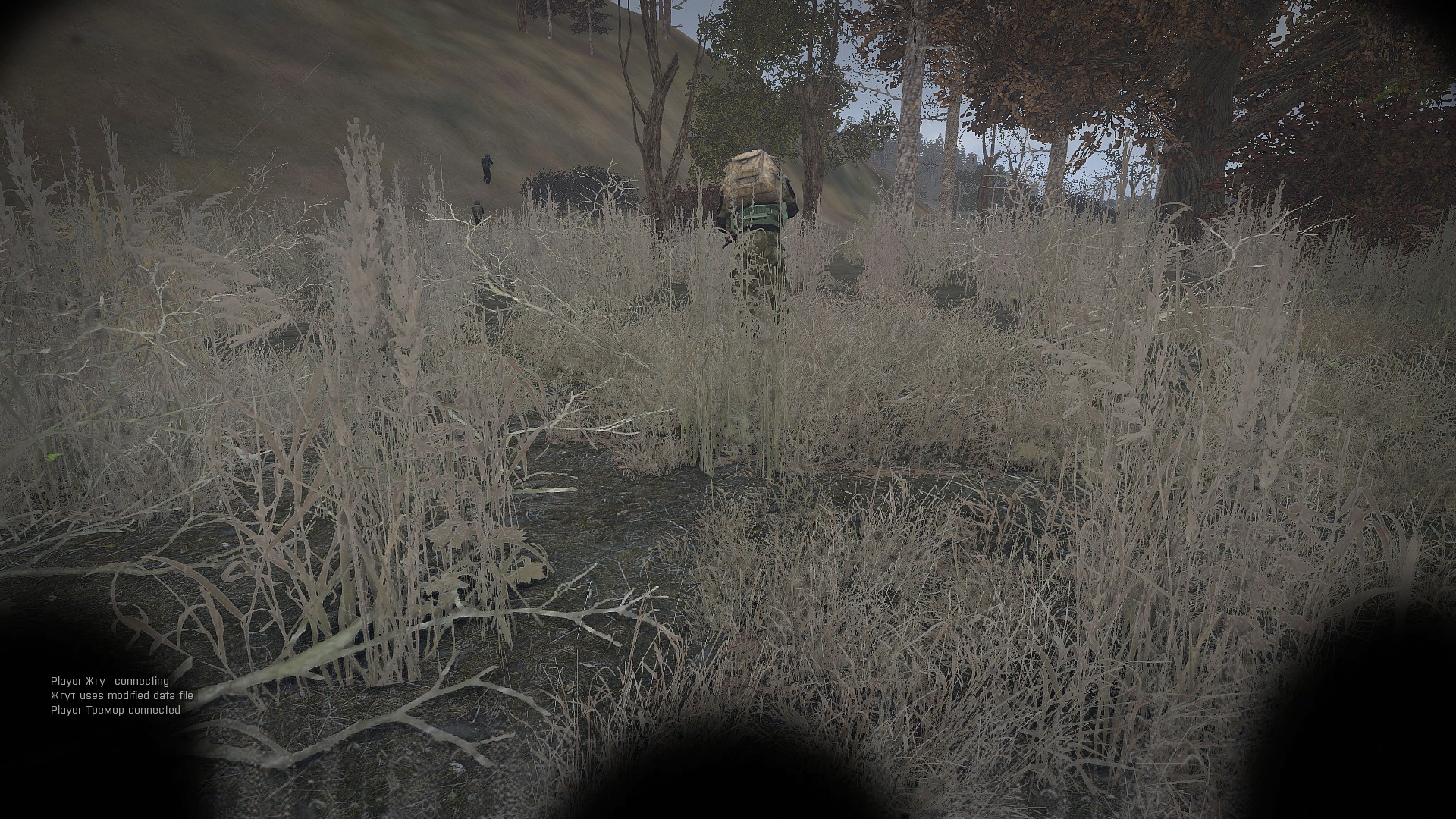 We set out from Rostok and held for about 5 minutes in the treeline, everyone still as they could be. Some stalkers were with us, their brown hoods, and flimsy looking backpacks next to the black spec op Duty soldiers. I thought that it couldn't be that bad, here these stalkers were taking the opportunity to travel with us, it had to be a good sign for me. 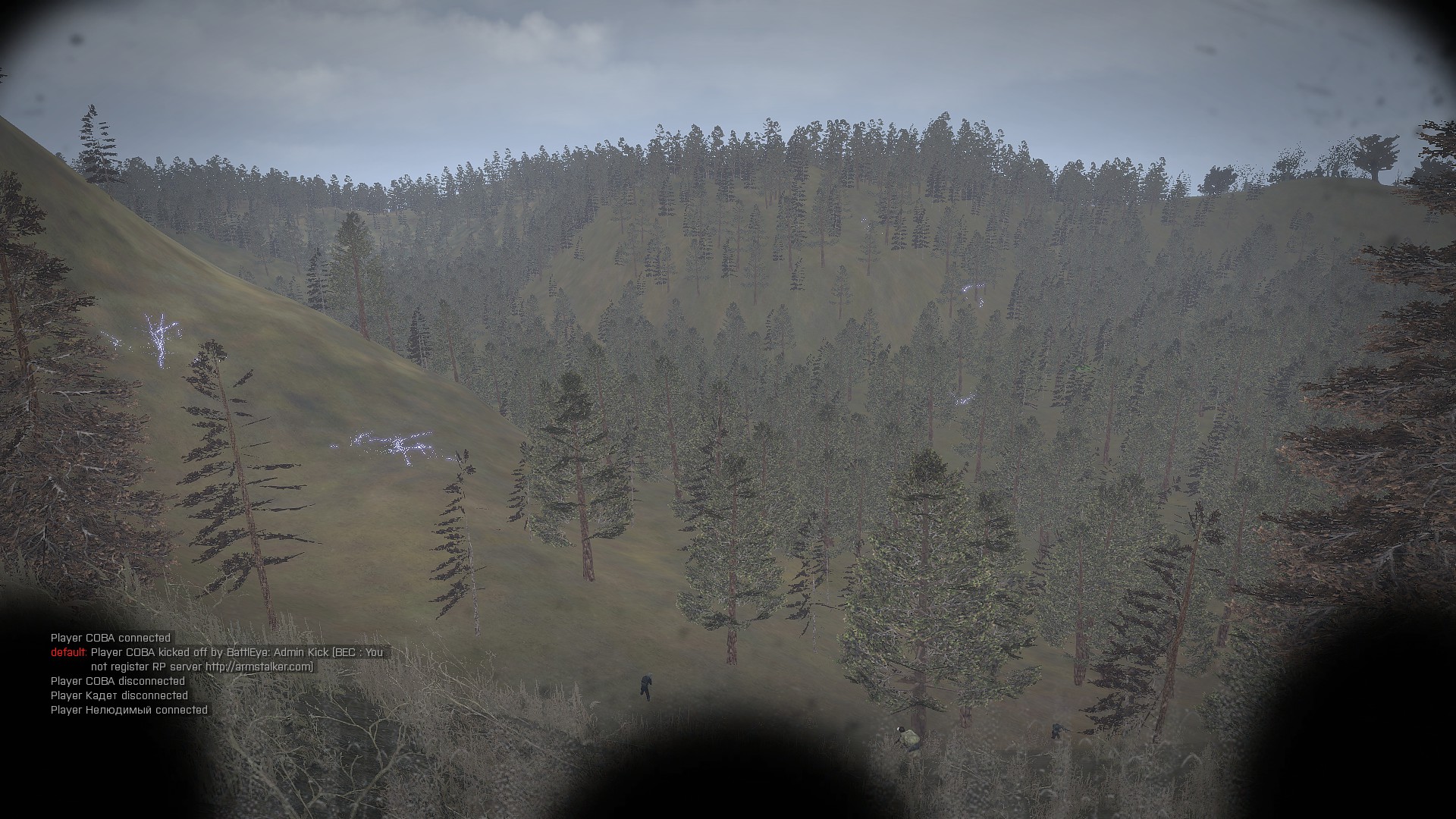 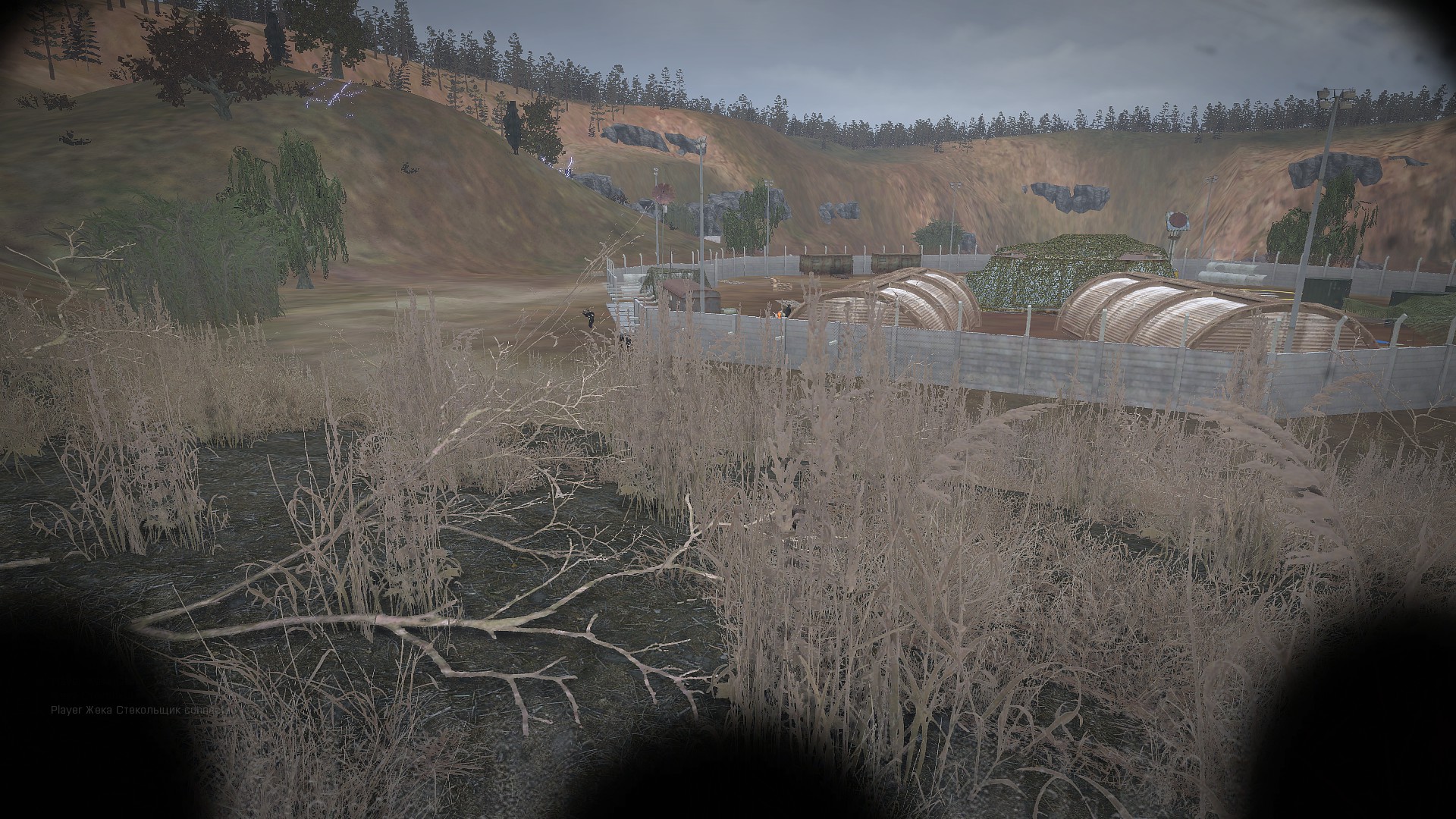 We arrived at the bunker, and I started to feel nervous.
The bunker was surrounded those flimsy Arma 3 cinderblock walls, it all looks a lot like the bunker compounds in S.T.A.L.K.E.R. .... We enter, my armed Duty escorts and the couple stalkers with us stomping headlong around the walls into the courtyard. I was quickly taken into the bunker and uncuffed, by a man in a military uniform. Again, very polite. He asked me to step into the lab, but then after no time at all he was leading me outside of the bunker. 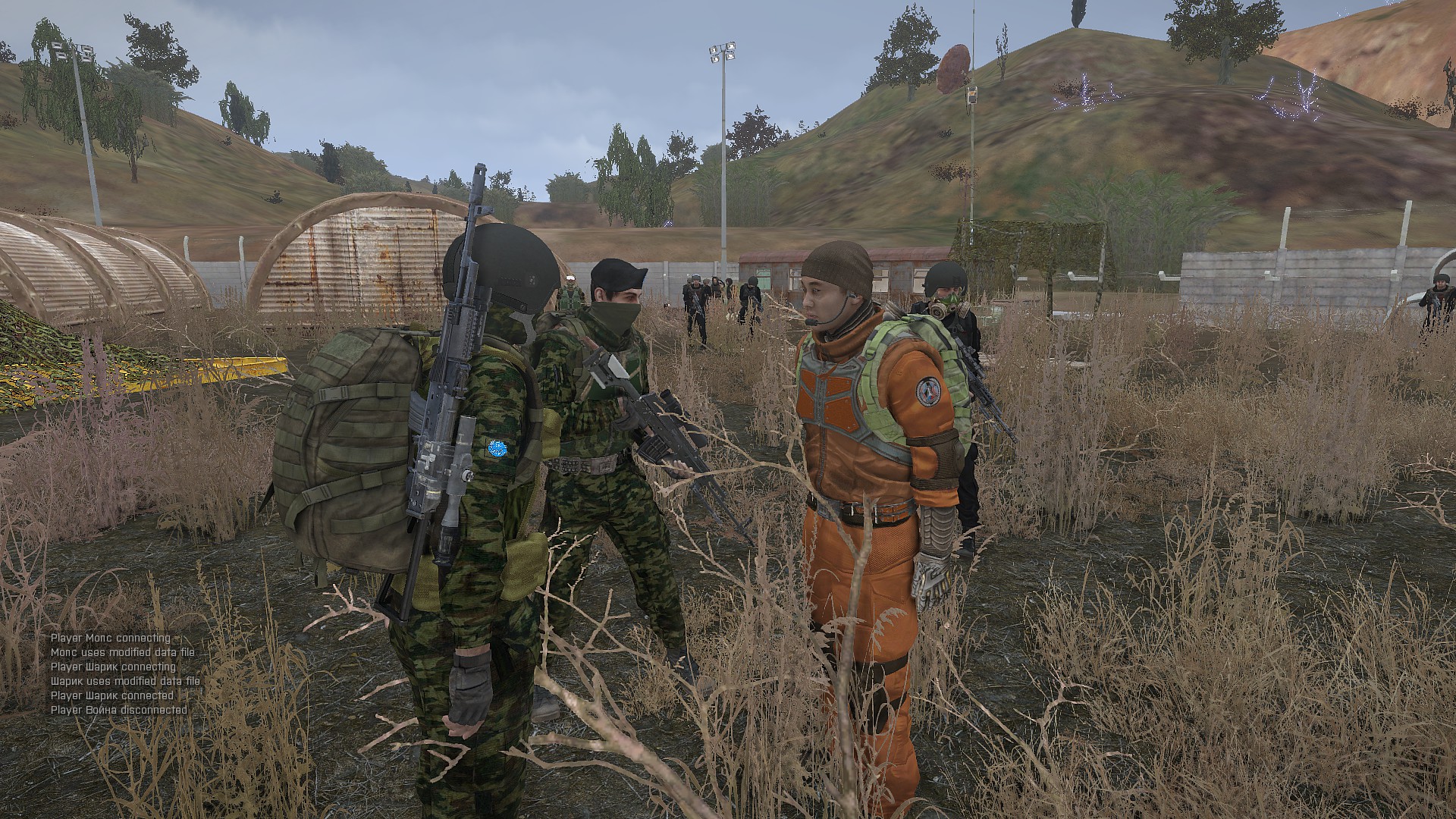 There must have been about 30 people there. Some standing in circles, some in small groups, single military guards seemed tense, roaming somewhat aimlessly around. At one of the entrances stood a group of about 7 men, in a different kind of uniform than the ones I could see other places. They were all in a line, most locked in one of the many idle animations we can select - giving our hangouts more authenticity. 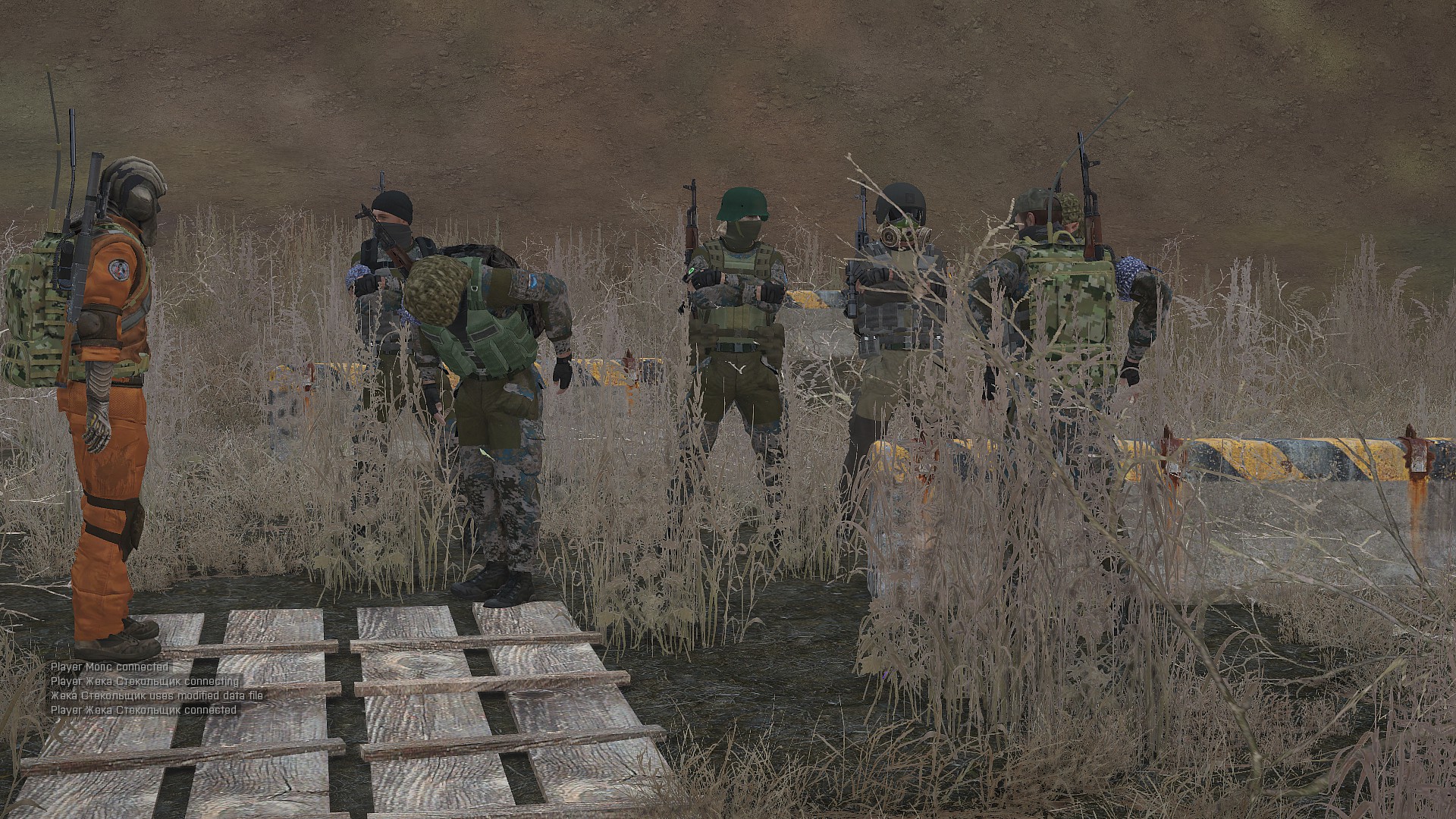 They didn't seem to know what to do with me. All of this, and they were just politely asking me to stand there.... They were talking with eachother, and eventually the military guy who uncuffed me showed me to a small metal building where he said I could sleep. ........ I was starting to get worried and a little irritated. These players were all strangers, and they seem bored... I know bored players are dangerous, and something is not right among the scientists here... 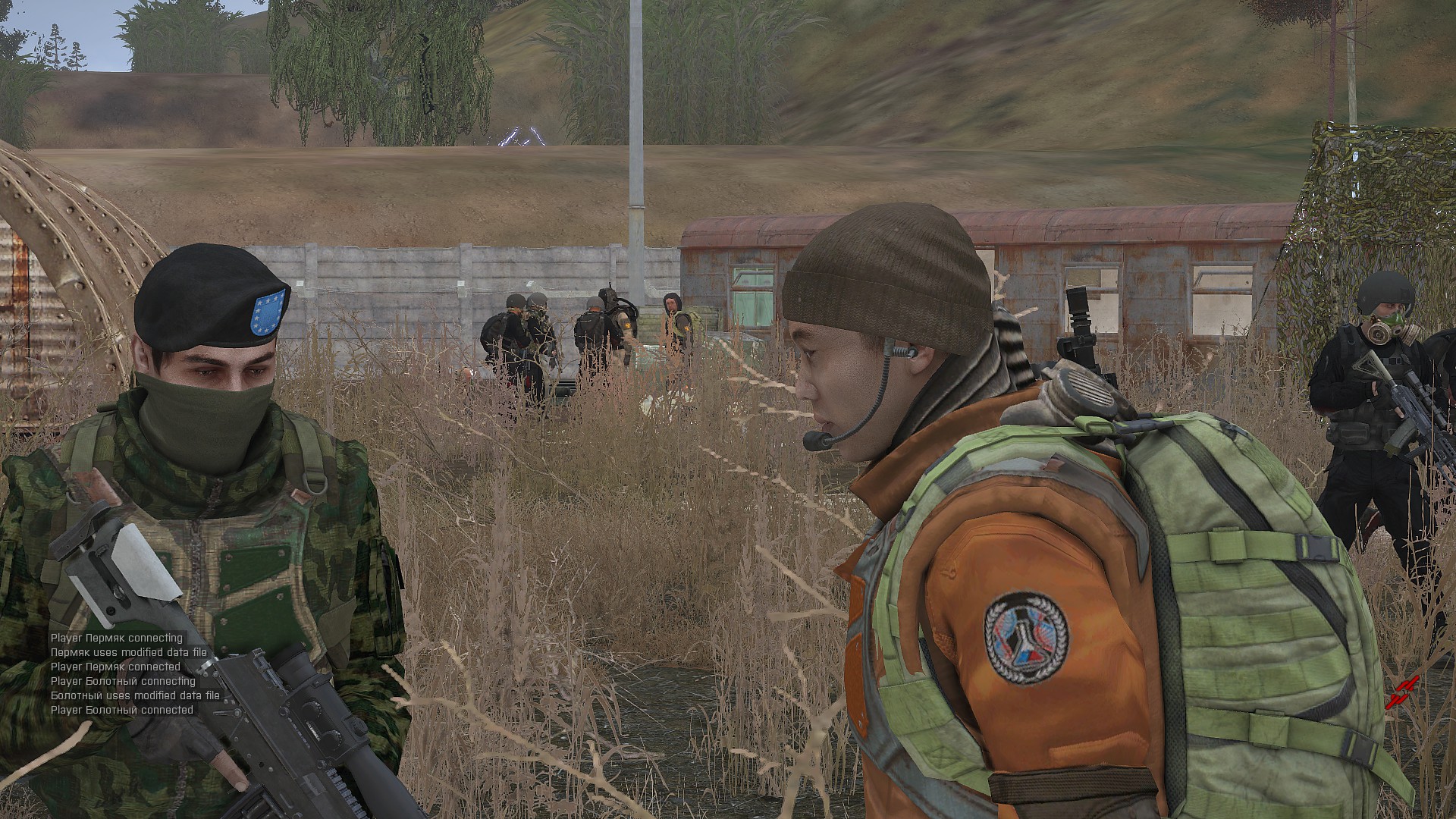 I didn't necessarily know what I wanted, but I would hope that as players they would see that I am there - playing - for the experience... They have all this money and stuff to me it seems like artifact hunting would be easy to take me along with... But... I am also humbled quite a bit by the language barrier. I try to be very cooperative because it is so difficult to talk with other players, and truly what options do I have... Run? ... 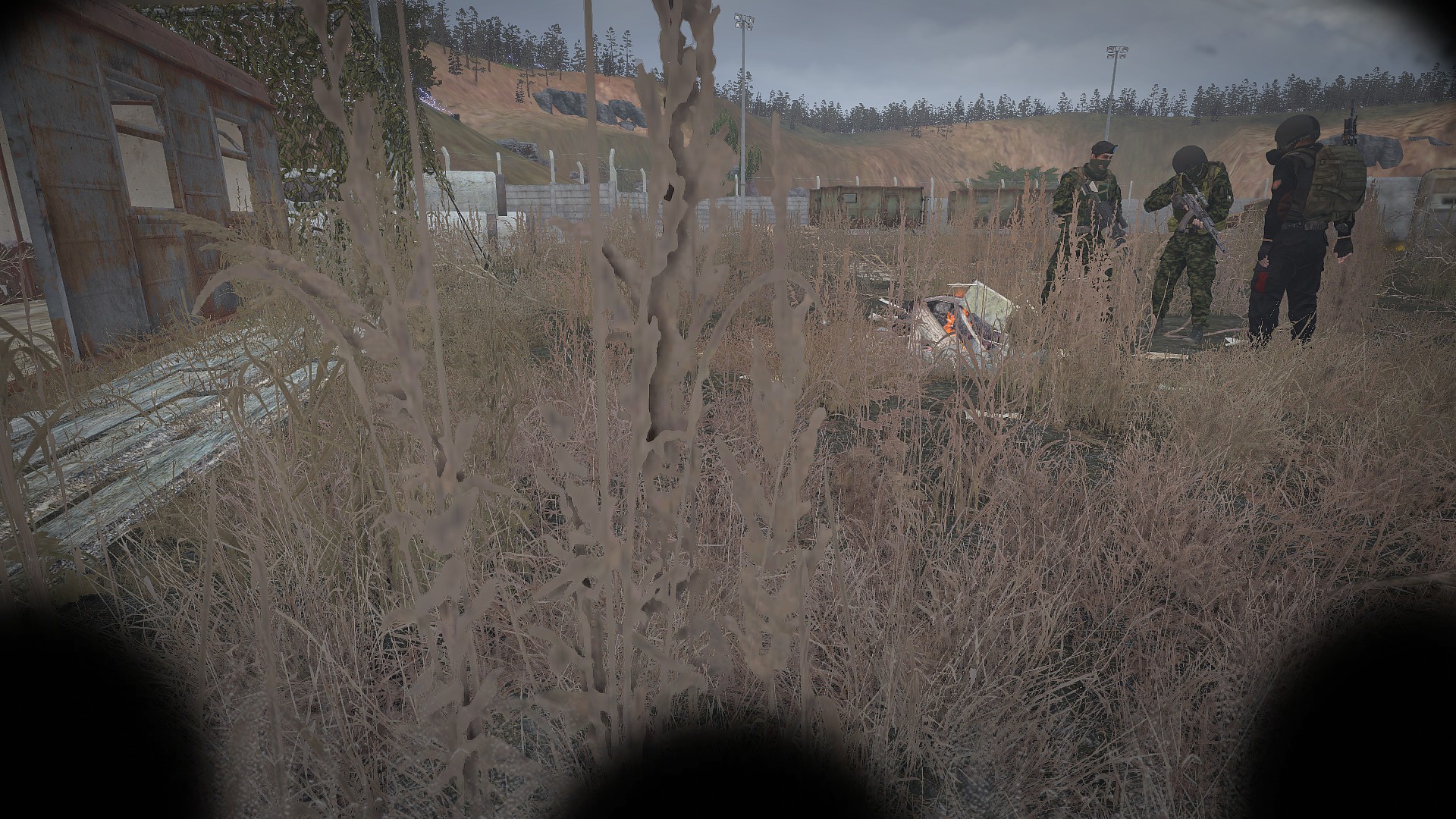 I thought that maybe at least I could escape.... at this point I had been playing for almost 2 hours just sitting around in bases, no one interested in taking me with them... so I thought maybe running would be fun.
If they didn't chase me, oh well, I can go explore and at least see some sights. .... no one had ever told me that I couldn't leave....

I took a breath and opened the door, casually walking out, closing the door, going down the stairs walking over to the place where those men were standing all in a row, at one of the entrances to the bunker compound... The guard standing there was relaxed as I approached... I walked up and said "Hey man, hey, I'm gonna go - okey?" pointing at the Zone beyond the wall. There was a confused couple seconds, I threw a thumbs up to seal the deal... He said something in an agreeable tone - I said "Cool man, Thank You" .... I walked right past him, and waiting until I had broken line of sight with him around the corner - I blitzed as fast as I could, back the way that Duty had taken me before. I sprinted hard until my stamina was done... I had looked back at the wall to catch a glimpse of dark round shapes bobbing after me for a split second, my hair was on end. I thought quick, and jumped into the cane grass, laying prone as the pursuers run past... 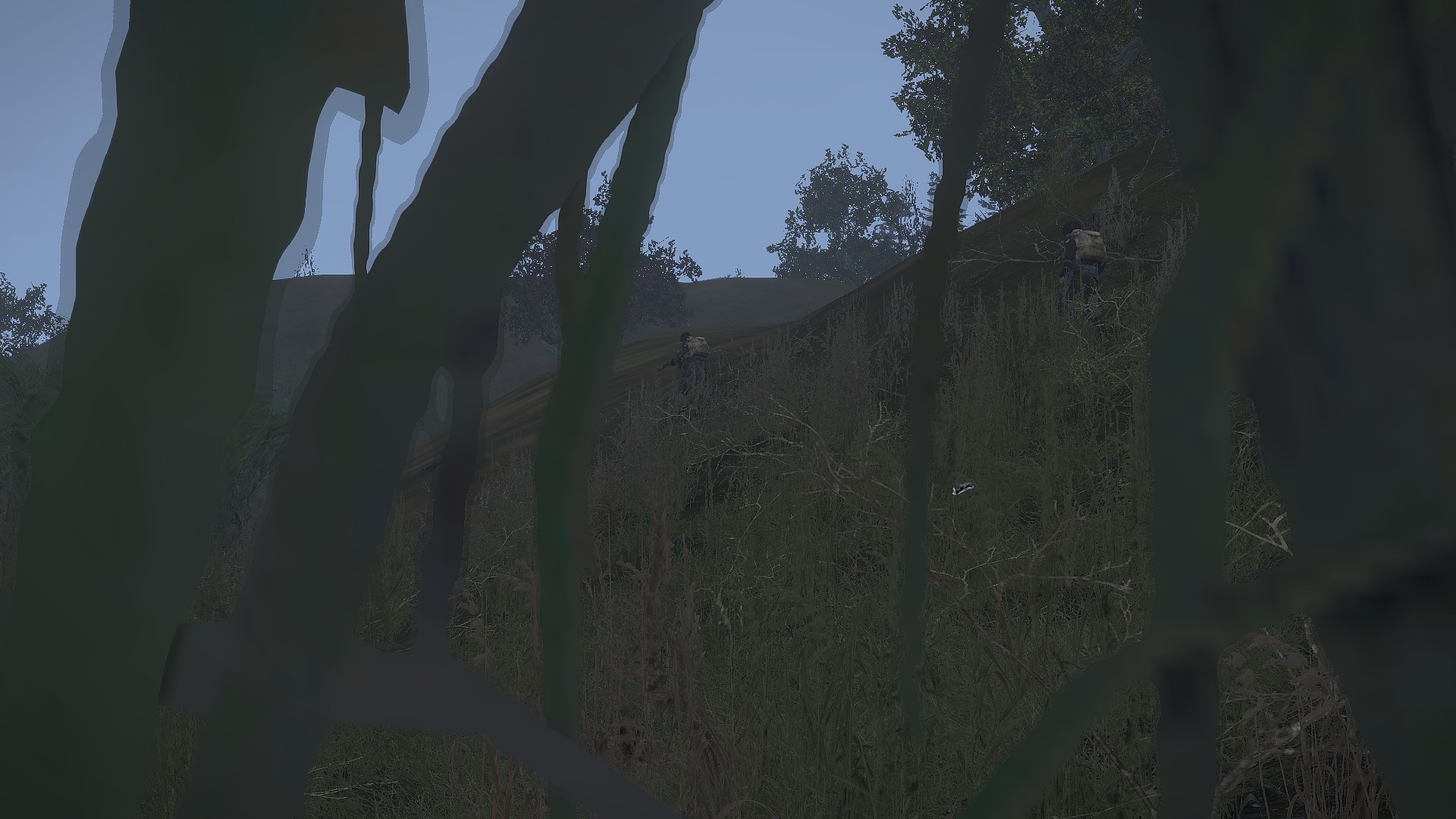 Join Me next time when I get caught again, and almost sent back to the USA! Bloodsuckers attack the bunker and we go on a journey deep into the Zone with Clear Sky!