A run-over of the roster for the NKG's Tech Level 1 Mechs.

This is an article to explain the Tech Level 1 line-up of Mechs for the NKG faction in Conflict Terra. I'll start off by saying that overall, the NKG Mechs are intended to be swift, heavy hitting, but lightly armored units that are more expensive and take longer to build than tanks. I call my Mechs "Combat Mechs" in-game, but if you want to delve deeper I call them SMs, which is derived from Sentou Meka, Japanese for "Combat Mech." 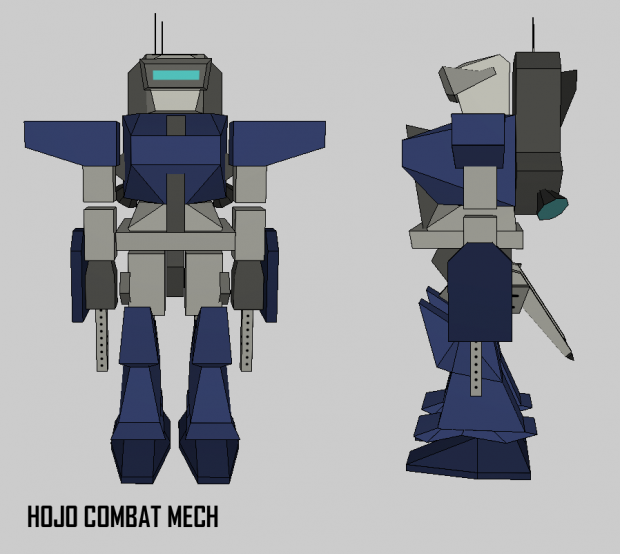 The Hojo Combat Mech is the most basic Mech for the NKG. Armed with a machine gun on each arm, it delivers short ranged but rapid fire damage. Overall a very speedy Mech, the Hojo Combat Mech can be easily amassed into raiding parties to take out outlying enemy posts.

This Mech was the first Mech I designed and made for Conflict Terra. It is also probably one of the most fleshed out designs, in terms of "real world functionality." Some examples of what I mean are the braces extending from the back of the thigh, and the extra ammo clips fastened on the outside of the thigh. The braces were a somewhat odd and silly attempt for me to rationalize a giant robot being able to retain it's balance after getting hit square in the chest by a large shell. The spikes would extend into the ground, allowing it to not topple over. This idea is purely fluff and "backstory," as no such thing is part of the gameplay experience.

The name Hojo comes from the Hojo clan of the era of the Kamakura Shogunate in Japanese history. A powerful family in early Samurai history, the Hojo were a decadent and weakened power by the time of the Sengoku era, which is where most of the other Mech names come from. It was intended that the Hojo Combat Mech would represent an early model SM. 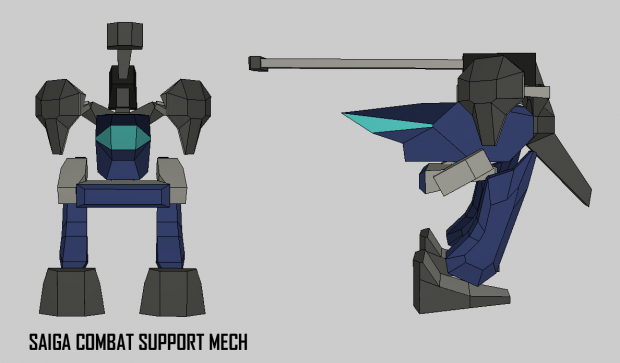 The Saiga Combat Support Mech is a specialized Mech in the NKG roster, designed to fulfill a role similar to that of a sniper. With a long ranged, powerful shot (that of course comes with a long reload time), the Saiga Combat Support Mech can be frightening if used correctly. It is also given a damage bonus to tanks, to counter their higher armor.

Also designed early on, the Saiga Combat Support Mech has been a hit with the play testers and those who've also seen its design as a "cool Mech." I've got to admit, I'm really fond of it too. It has a good theme going on. I didn't want all of my Mechs to turn out as very similar Mobile Suit-like robots, so I delved into the other main themes for Mechs, of course coming to the popular reverse-joint legs, or "chicken legs", as a lot of people like to call them. The shield-like extensions coming from the "shoulders" were intended to be just that, shields to help protect the Mech, and the tail-like extension was added to help with a sense of balance. The long barrel can't swing much from left to right, but the body of course can swivel.

The name Saiga comes from a popular figure in Japanese Samurai history, Saiga Magoichi. Leader of a band of riflemen, the name Saiga Magoichi was actually a name given to all the leaders of this group. That being said, there was more than one in history. This mech was given the name Saiga to reflect it's intent to be a marksman. 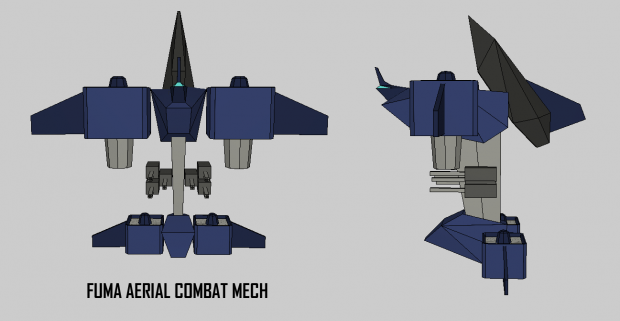 This one is sure to cause some confusion. Yeah, I'm aware that there isn't much "Mech" about this unit. No arms, no legs, not much of a head, and all around it just looks like an odd aircraft. That's true. But I went with the idea that it wasn't much of an airplane either. The design for my aerial Mech changed a lot in my head, but I finally settled on this one. I'm pretty happy with it overall. I think it is a very menacing design, which adds to its menacing behavior in-game.

Fuma comes from another popular figure in Japanese history, Fuma Kotaro, leader of the Fuma clan of ninja. I won't get into my opinions and thoughts concerning ninja, but I will say it was named that to convey a sense of fear and surprise. 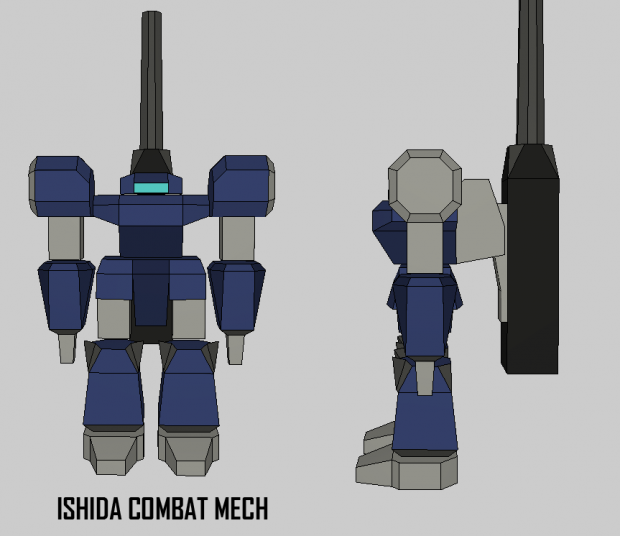 The Ishida Combat Mech is a heavier, more siege-oriented Mech, armed with (obviously) a large back-mounted cannon, along with a machine gun on each arm. Not as fast as the Hojo Combat Mech, but a lot hardier, this unit is meant to break a hole in early-game lines.

This Mech came pretty late in development. I wasn't sure what I wanted for an "artillery Mech", and images of Guncannons kept floating around in my head. I decided to just go at it and see what I made, and this was the result. The large gun on the back is sort of silly, I'll admit, but it was the best I could do at the time. I gave it the machine gun arms to provide some kind of anti-unit protection.

To be honest, the name Ishida was a bottom-of-the-barrel one that I tacked on towards the end of the naming process. It comes from Ishida Mitsunari, an important figure in the late Azuchi-Momoyama era of Japan. I'm not much a fan of Mitsunari (he's usually portrayed as an antagonist), so sadly I gave this unit (that wasn't yet designed) his name. 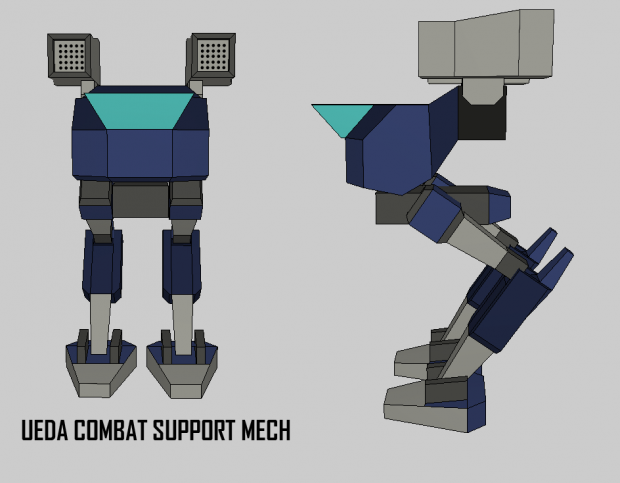 This was also designed somewhat late. Like the Ishida Combat Mech, I was hung up on what to make my missile Mech look like without going to the stereotypical places. Sadly, I went there anyways, with a very MT-like design from Armored Core. I'm okay with it though, because I think it came out pretty nice. Probably some of my nicer reverse-joint legs.

Ueda actually came from a castle, not a person. Ueda Castle was the famous home-base of the Sanada family from the Sengoku era of Japan. Coined as an impenetrable fortress, Ueda was key in the Battle of Sekigahara in 1600. There was no main reason I gave Ueda to this unit. I've always liked the name Ueda and I liked the idea of a missile Mech so this guy got it.

That about does it. A similar article on the Tech Level 2 Mechs, and most of the remaining units, will probably come sometime in the near future.