Posted by AshtonAndersen on Feb 5th, 2010 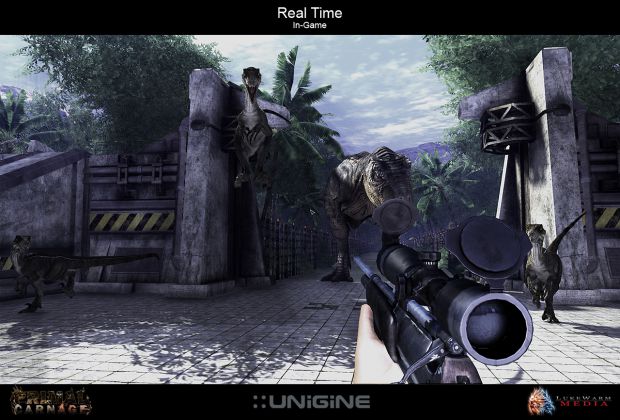 “Lukewarm Media is a rare combination of daring talent, passion and experience in game development industry. Being built in less than 2 months, the Unigine-based demo of Primal Carnage has really
impressed me. When powered by such a productive team, the game has very good chances to gain significant success. Along with providing our middleware solutions to large established companies, our company has also granted support for a lot of independent companies. Independent development
is quite a rocky road, so we will do our best to help out from the technical side, thus helping this
willing and audacious team to release their feature-rich game”.
- Denis Shergin, CEO of Unigine Corp. 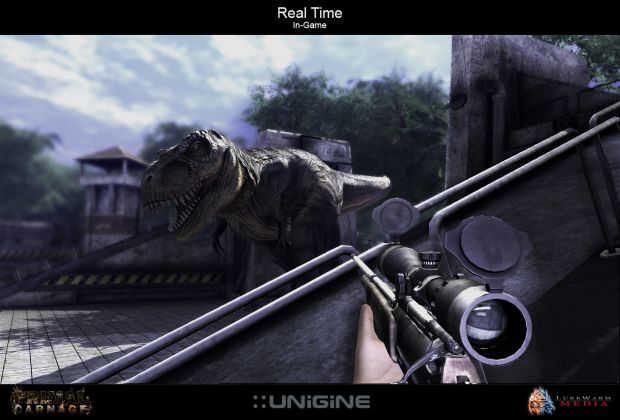 “Working with the Unigine engine has been an inspirational yet fantastic experience. Lukewarm Media feels privileged to work with a support team as dedicated and motivated as the Unigine team. With Unigine's top-end visual rendering system and support they offer their clients, it’s no question that Unigine will be a top choice for many developers in the coming years. The Unigine engine, with its quick-to-learn toolset, has helped Lukewarm Media bring its ideas to reality. There are a number of other exciting aspects to using the Unigine engine including (but not limited to) its support for DirectX 11, and being able to include the Unigine toolset and SDK for development of custom content and mods. This is a mutually beneficial partnership as it should allow both the Unigine and Primal Carnage communities to flourish. Overall, Unigine is an engine that without doubt has the amount of power needed to get a dinosaur moving!”
- Ashton Andersen, Producer – Lukewarm Media 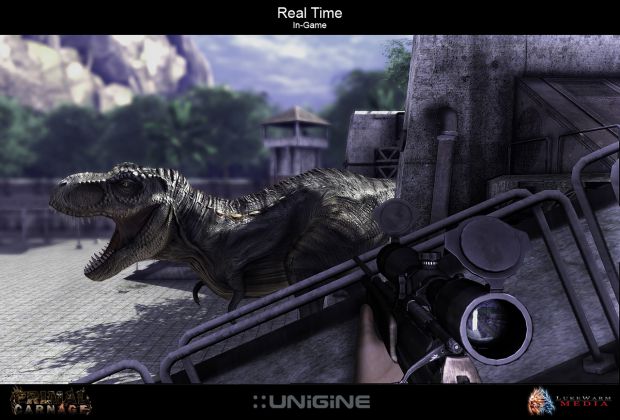 Unigine™ engine provides photorealistic 3D render, powerful physics module, object-oriented scripting system with a very rich library (more than 3000 methods out-of-the box), full-featured GUI module, sound subsystem, and a set of flexible tools. Efficient and well-architected framework supporting multi-core systems makes Unigine a highly scalable solution, on which multi-platform games with different hardware requirements can be based. Currently both the engine and the toolset are available for Windows and Linux platforms. This feature-rich middleware is successfully used in various VR projects as well as in modern games of different genres. Unigine is also the technology base for the first ever and well anticipated DirectX 11 benchmark “Heaven”. 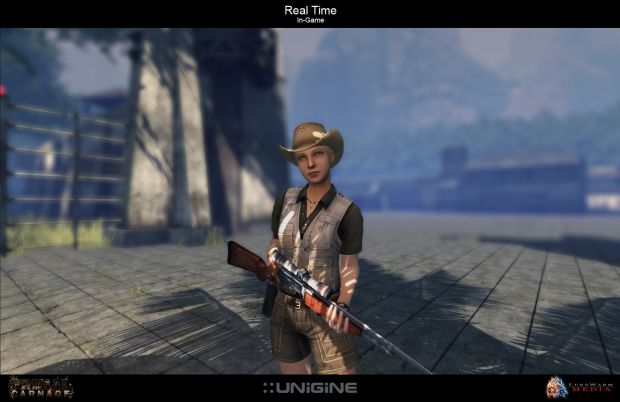 Game Description:
Primal Carnage is a fast-paced co-operative multiplayer action shooter set on an island where dinosaurs roam free due to a disastrous military experiment. A team of mercenaries – a playable faction – has been dispatched to contain the threat of the dinosaurs, the other playable faction. With each faction containing unique abilities and each mission having various objectives, Primal Carnage will offer gamers a balanced and highly competitive gameplay experience.

Genre:
Combining the fast paced action of an all out multi-player FPS, and the need to accomplish specific objectives by each team member to complete a section of each level, Primal Carnage® will raise the
bar for co-op game play.

With immersive, high fidelity sound, stunning visual and environments, late night pizza will be the call from your team members as you attack the next level. Can you be the top ranking Merc or
Jurassic crew in the world?

Features:
• Playable characters: 5 Humans / 5 Dinosaurs.
• Single player game play.
• Multiplayer game modes.
• Unlockables.
• Achievements.
• Every class can trump another specific class on the other team in a rock / paper / scissors fashion.
• The human team plays in the first person perspective, while the dinosaurs play in the third person perspective.
• Long term support with DLC.
• Arcade style fun that’s simple and easy to pick up and play at any time.
• Five-on-five multiplayer gameplay allowing you to play as a human or a dinosaur.
• Survival Mode (4 variations) – how long will you be able to survive against the dinosaurs (or vice versa).
• Capture The Point mode – fast-paced objective based variation on a classic gameplay mode.
• Strong emphasis on teamwork to complete objectives and/or survive.
• Ranking and matchmaking system and rewards to encourage collaborative play.
• Powered by Unigine. Comes with the Unigine engine MODSDK + Primal Carnage SDK for mods, custom content. 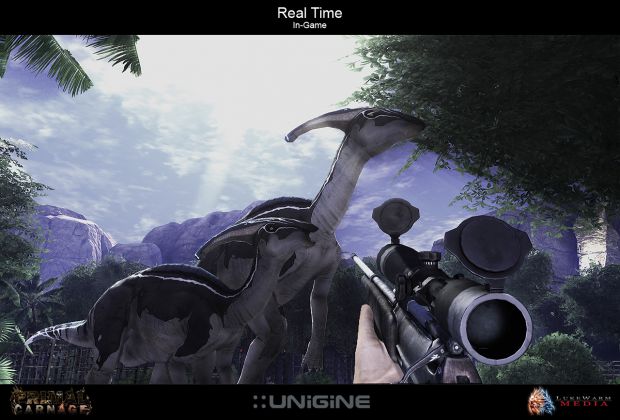 Unigine Corp. is an international company focused on top-notch real-time 3D solutions. The development studio is located in Tomsk, Russia. Main activity of Unigine Corp. is development of Unigine™, a cross-platform engine for virtual 3D worlds. Since the project started in 2004,
it attracts attention of different companies and groups of independent developers, because Unigine is always on the cutting edge of real-time 3D visualization and physics simulation technologies.

Unigine Corp. is a registered developer of Advanced Micro Devices, Inc. (previously ATI Technologies Inc.), NVIDIA Corporation and Creative Labs Inc. Being a registered developer, the company
works closely with hardware vendors in order to provide the best level of performance and stability of its products. The company also has a license to develop tools and middleware for PLAYSTATION®3 platform. 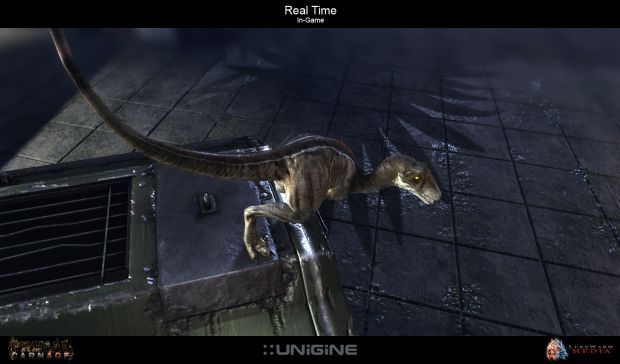 Lukewarm Media is a newly established independent multimedia design studio. The team has a highly passionate, dedicated and gifted group of artists, programmers and developers who share in
Lukewarm Media's common goal of making high-quality, immersive games that bring gamers to the edge of their seats.

The studio has grown exponentially in size since it was founded and with its ever-growing roster of up-and-coming talent, will look to ride the wave with the next generation of game developers in this exciting and always expanding industry. 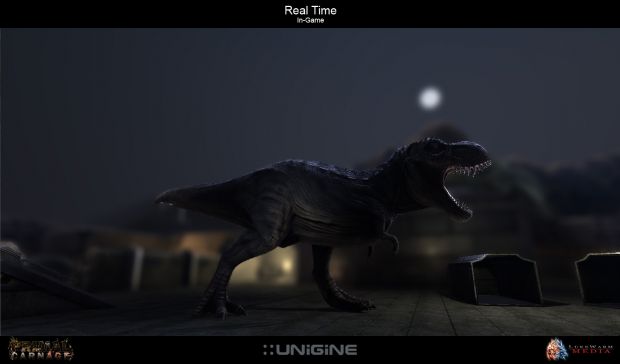 That looks amazing, just keep in mind graphics aren't everything!
Good luck with your project, keep it up!

Kickass, I want Unigine too :). Watching.

I CANT believe that we'll NEED to play as a Dino in THIRD ******* PERSON, everything else looks absolutely marvelous.

You, sir, win the most ROFL-filled comment of the week! Congratulations, rawr

I wish i could get the Unigine but it's expensive. Incredible work and incredible engine.

For this alone, you've earned my "tracking", well done!

Go indie game developers! Looks fantastic can't wait to see how it turns out. It reminds me of the Carnivores and those good ol' days where the eyes were the targets for the T-Rex. I hope there are some unique gameplay elements, I saw that it was to be described as an arcade shooter but I hope it doesn't have that UT3 gun fighting style and maybe something a bit more elaborate, iron sights are always a plus. :)

Great news with full mod support and a great looking engine. It looks like you guys are really moving along and I can't wait for upcoming betas :)

finally. xD it's about time Unigine showed us indie devs a little bit of love. This along with linux support is...pure awesome.

I just checked out the benchmarks and WOW this engines amazing but did you guys pay for it ?, it's about $25,000.

my computer won't handle yhis for sure

how much will it cost?

It's hard to say at the moment, but I would say no more then $20 usd. But it's to early to tell. Right now we are none-funded team and do this on spare time so we can sell it as cheap as we like. However if a publisher picks us up then that can change depending on their pricing.

You should contact value and get it on steam if you're looking for a publisher to make money from it.Good luck!

Looks amazing, but I really hope the DoF effect is just being used for exaggeration right now. It's rather excessive in those shots, and would give me a headache.

I wear glasses for a reason!

(Yeah yeah, the reason is because I spend too much time behind a computer screen, but also so I can see things sharp!)

To be honest, we will have DOF but not as crazy as that. It's mostly used for "effect" to show off the Post effects in unigine as well as focus on our characters. It's just a screen shot technique, mass effect 2 did a bit of it. Speaking of glasses... Primal carnage in 3D? anyone? =)

Alright, sounds good. :D And yeah, whoops. I meant DoF in moderation is okay! And... Do you mean Nvidia's 3D, or other methods as well?

Beautiful images; graphic speaking, that game and engine just impressed me a lot, keep it up the good work.

I in a process to re-acquire and never give up of ATi again, so 3D will work in ATi's? If not not interested ;)

AshtonAndersen is there a release date?

Those Dinos may be the best model/texture combo in any cryengine as of right now but we still have zero concept video that shows any Dino game play.

Awesome, though I hope the framerate is good on mid range systems.

Why is this so beautiful?!

"Currently both the engine and the toolset are available for Windows and Linux platforms."

Daym, Thanks alot, now i need to change my underwear. =/

The rate of progress I've seen on this game is phenomenal to say the least.

This seems to be worth checking it out ;)
..really worth it!!