These are the features available in Tier Tactical 0.1.5 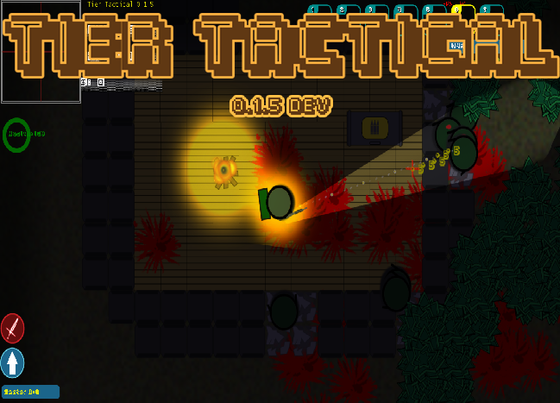 Tier Tactical is technically inspired by many things, Minecraft, Terraria, and games like Left 4 Dead. However, what it DOES encompass that is barely even shown in the above games is a wide open arena for you to demonstrate your tactical superiority and technical know how of how to survive in a zombie apocalypse. Currently implemented items are as follows:

WEAPONS
-The player can carry up to 5 weapons at a time, the arrangement of these weapons are decided by the players Tier. 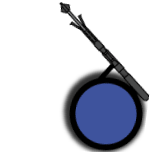 The weapons that are unlocked and usable are determined by the players level, The current schema is every weapon is unlocked at an even numbered level (with the exception of the M1911 and Glock 17c which are unlocked at Level 1). Upon unlocking all weapons in a Tier, the Tier Up Button will appear. Upon clicking it, it will reset your level and experience to 1, and unlocks the next Tier.

IT DOES NOT REMOVE YOUR WEAPONS PERMANENTLY
At ANY time you can go back to the previous tier and try your old weapons out.

There are about 15 different blocks added into the game, 8 in development, and more coming soon, Below you can find some details on each block.

Trees
Aesthetic, and have proper collision boxes, also decrease the finding area for zombies to chase you (allowing stealth)

Planks
Get ready for this one guys.
Aesthetic
Lights
Basically a small lantern on the ground which requires a power generator to be nearby and on for it to generate light. It does not generate light during the day, and in fact drains power if still on during the day.

Power Generator
An orange generator with a small light on it that indicates if its on or off, it carries 19000 units of fuel and burns it whilst on, but generates power for your lights, also has a limit on how many can be placed.

Ammo Box
A gray rectangular box that has an ammunition sign on it. It refills your guns' ammunition if nearby, It will eventually cost money, and be able to let you change your Tier for a cost.

Stairs
These are used to move the players layer up one level, allowing you to build roofing for your houses using any block as you please. (Currently has a bug where only the last placed stairs will work).

Wall
A black box about the size of the aesthetic blocks, it serves a purpose of blocking the zombies from entering your home/base, but suffers from a defect of being destructible, they will recover from being destroyed If given some time and their health can be viewed by pressing the F2 key.The

A cheaper method of creating light, however, the light is very feeble and has a chance to go out if unattended. It has a side-effect of regenerating player health if the player is nearby, and costs money to make.

Following ones are intended to be released with the next revision:
Extractor
A large white structure to be put on top of fuel pockets, it extracts and refines the fuel for you, allowing you to store it in your backpack and refuel your generators, can also be used to generate money instead of fuel.

There are five main vehicle classes that are intended to be added.

Cars (implemented)
Your run of the mill cars to your supreme exotic sports vehicles, there's a lot of good stuff left behind in a zombie apocalypse you know.

Tanks (implemented)
From your patrol tank to heavy artillery, tanks will be used against larger zombie threats. 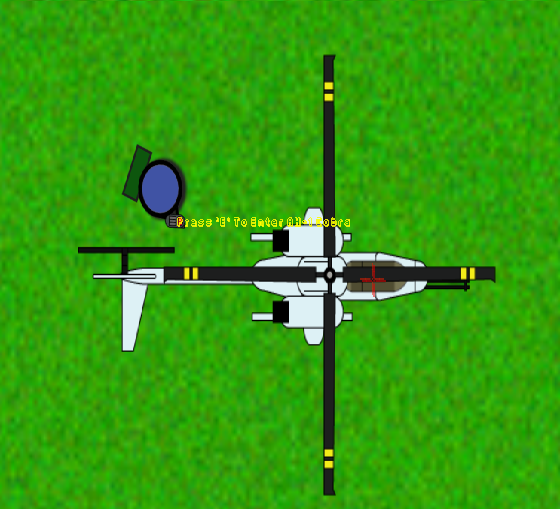 Because murdering zombies with "Ride of the Valkyries" in the background was too amusing to leave out.

Jets (implemented)
When the apocalypse occurred, many believed that the Air Force would be the first thing to go. In fact, many facilities managed to stay open due to their locations being far from infested areas. Jets are intended to take out massive zombie threats.

Boats (under construction)
PT boats to Air Craft Carriers, when zombies were found with the ability to swim, the Navy would have none of it.

Average zombies sport a large amount of health, and a never ending urge to kill the player if he is out in the open. You can Hide from zombies by hiding in trees or brush, or attempt to Kill them with your weapons, they are stopped by walls, and attempt to smash their way through. Multiple zombies in one spot on a wall can easily break it down and overwhelm the player.Alpha zombies are a rare occurrence in a zombies spawn patterns. There is an odd chance that an alpha zombie will be created, Alpha zombies are considerably darker in color, and sport a large amount of health. They also have the ability of "leading" the pack straight to you, and ignoring your camouflage you may have hidden in, thus making them a priority to kill.More enemies are planned, so stay tuned!
STEALTH

As Mentioned before, Hiding is a good tactic to use against the horde, as the undead are incapable of detecting anything above the smell of brains, and loud noises. Certain objects (Trees, bushes) are capable of hiding the player, and other objects (generators, lights, extractors and campfires) are capable of giving away your position or bringing the horde to them.