A run-down of the Tides of War: The Clone Wars' system for management of faction territory. This is the current iteration of what will be available at launch.

D
evelopment has reached the point at which we can now start finalizing the overall design layout and rules for faction territory and control handling. The intention is to start the inital 1.0 release of the mod with a limited number of systems for player use and expand as the mod is updated over time. This will allow for player-generated input in where the mod goes and will allow the mod to develop as the community does.

This initial set of planetary systems was chosen based on either their importance in the war or for their visual layout as a means of adding more diverse scenery to the mod. 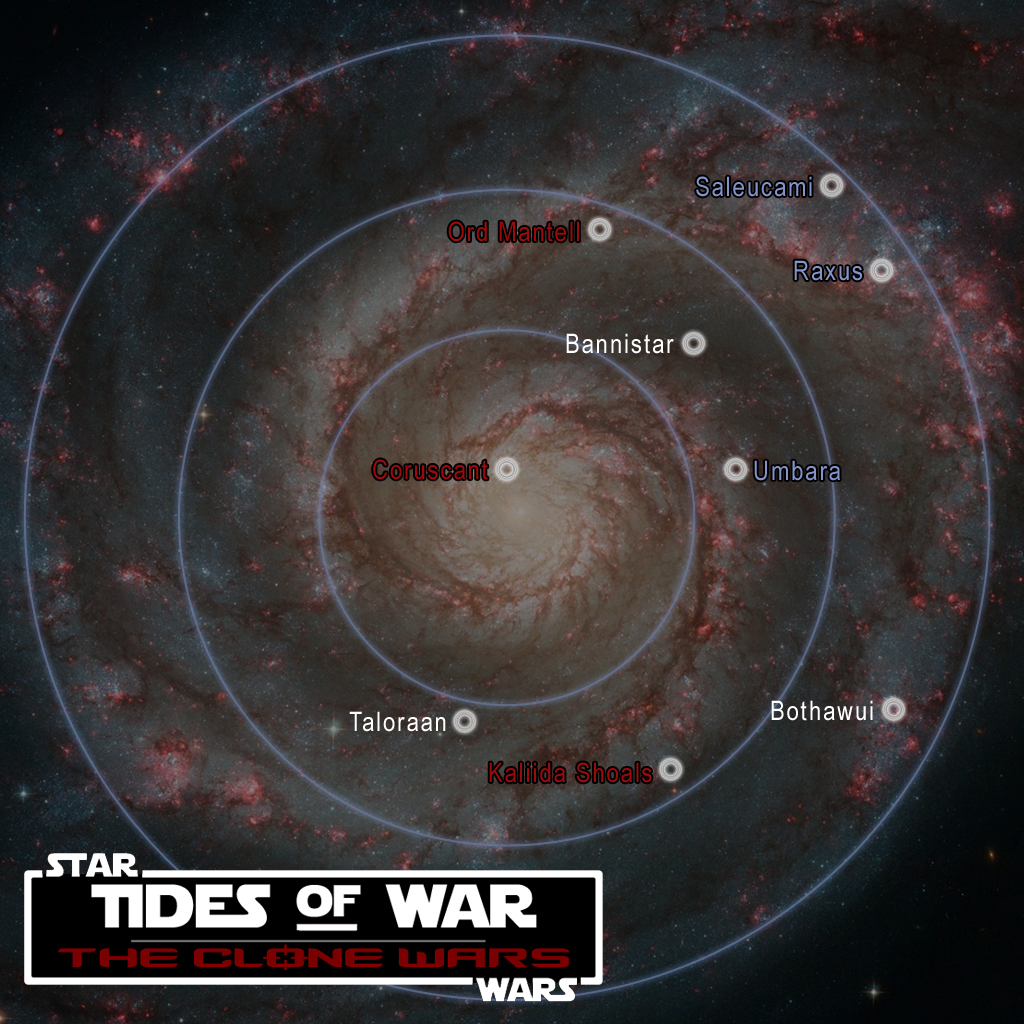 The systems labeled in RED are the Galactic Republic's starting systems while those labeled in BLUE belong to the Separatist Alliance. The WHITE labeled systems are established as neutral/civilian systems whos purpose is to promote trade and support a more diverse in-game economy.

Star systems in the mod will be connected by means of a "Deep Space" system through which all ships must travel at sub-light speeds to reach the jump points for another system. This type of travel has been chosen as the most efficient means as it allows for the addition of new systems to the game, with no changes required to other systems, and it gives a connecting location for potential faction engagements without having to be near a planet.

As the mod progresses, a faction will be permitted to engage the opposing faction in a declared Territorial Engagements, or TE's. TE's can take several forms, all of which have been outlined below:

PLANETARY ASSAULT- Planetary Assault TE's are designed to take place within a star system for the purposes of wresting control of that system from the opposing faction. The location of the battle is chosen by the attacking faction and they may engage the defenders at will. The following rules will apply:

FACILITY DEFENSE- Facility Defense TE's are centered around a static object in space, typically a space station, which the defenders must prevent from being destroyed. Of course it is the goal of the attacking faction to destroy this facility in turn. There are also a couple rules for this type of TE:

Further concepts for Territorial Engagements will be developed as the planning stages continue. Stay tuned for further updates and feel free to comment with your own unique ideas.

It sounds like that we can take over REpublic or CIS Planets and base. As example I'm a Droid Battleship attacking a base and win. than i can "cap" it? OR am i wrong. that would be amazing.

Yes, territory can change hands between the Republic and the Separatists. Further down the line more systems will be added so it becomes a bit more difficult for each faction to manage their star systems but gives more options for battle locations as well.