This article will give more insight into the Vaegir Empire's army : its composition, strengths and weaknesses. 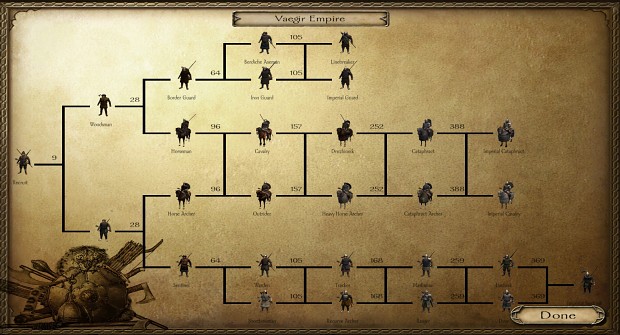 
The Vaegir Empire fields a relatively balanced forced with a strong focus on archery and ranged combat in general. One of the particularities of the Vaegir army is that all its troops can spawn with ranged weapons : even the infantry often carries crossbows or javelins. Most troops wear light to medium armor, which makes them quite fast but not very durable in a prolonged fight.

A typical Vaegir army will consist mostly of archers supported by a defensive infantry force, horse archers to harass the enemy and cavalry to counter enemy cavalry and act as the hammer. As long as the Vaegir lord manages to keep his archers safe, his superior firepower is likely to grant him victory over his foes.

The bulk of a Vaegir army (tiers 4 and 5) is divided in 6 different troops :

Oh, do the Rhodoks next! :D