An in-depth explanation of how the stealth mode works

Stealth game play starts when the player finds and picks up the Amulet of Shadows. After the inventory and weapons have been changed the player becomes invisible towards the enemies with no time limit restrictions, but this is not perfect and the player can be detected if they are too close. 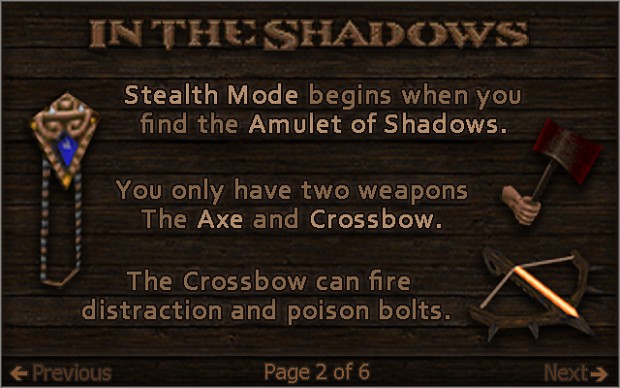 Once the player is discovered the Amulet stops working and the cloak of invisibility is lost allowing enemies to see the player again and attack. If the player can successful hide for more than five seconds the Amulet is enabled again and a special marker (pentagram) is placed on the ground. Any enemy that is still looking for the player will be heading towards this marker and the player should remember to keep moving.

When the Amulet of Shadows is active all enemies at a certain distance will show a Stealth Eye above their head indicating if the player is in danger of being discovered or not. The eye can also show if the enemy is temporarily immune to backstabs and also what stage of poisoning the enemy is affected by. 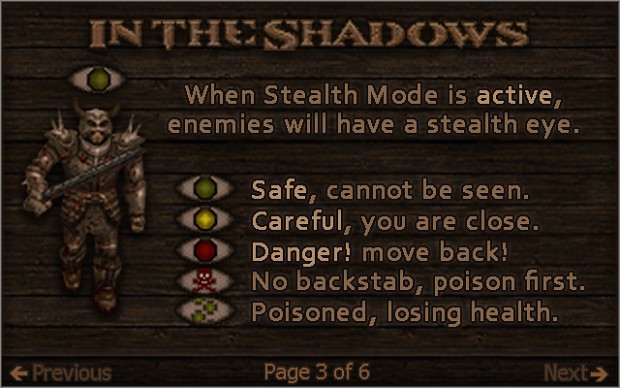 The first stage of poisoning is that the enemies health is reduced (green dots rising), the second stage is the health being recovered (red dots rising) and finally the last stage is a red skull warning the player that the enemy can no longer be back stabbed.

All enemies that are temporarily immune to being backstabbed are represented with a skull symbol instead of the usual coloured iris and training enemies have a white iris outline instead of black. All stealth eyes have the possibility to blink, look left or right and if the Amulet is disabled even fall asleep! 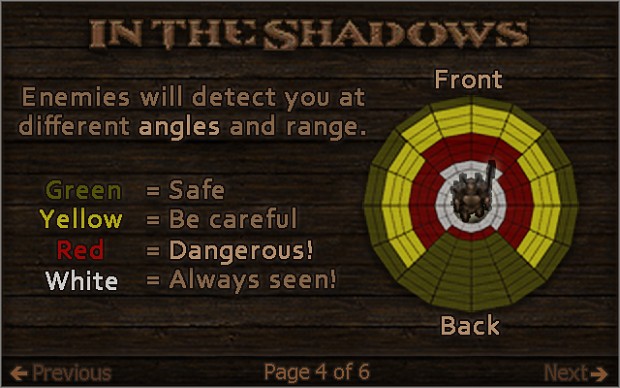 When the Amulet of Shadows is active all enemies will detect the player based on how close they are and what area (front/back/side) they are in relative to the enemies facing direction. As the diagram above shows the detection circle around the enemy is split into 4 quadrants and broken down further by colours which are displayed on the Stealth Eye.

When the player enters a red area or stands directly behind (really close) the enemy a timer is started and the eye will constantly blink red. The player has a limited amount of time to decide what to do before the enemy will discover them. The timers are also linked to skill levels (easy/normal/hard/nightmare) and on higher skill levels will expire much more quickly.

At the beginning of every level the player starts with no poison bolts and has to find bottles of poison scattered throughout the world in order to create some. Often these bottles are hidden in stealth alcoves or secret areas and are rare items which the player should save for emergencies. 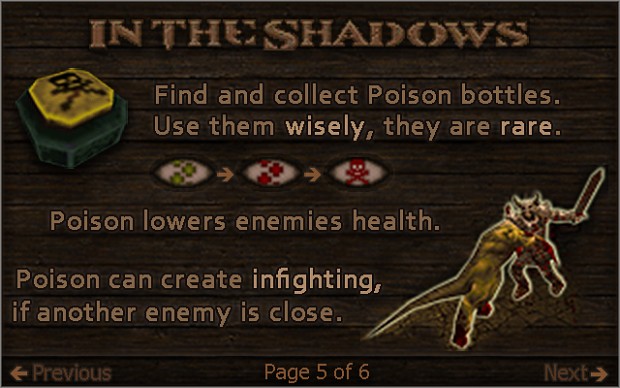 The primary use for poison bolts is to lower the health of enemies so that they can be backstabbed. This is done by firing a poison bolt at an enemy, waiting for the poison to take effect and finally doing a backstab at the right time. The different phases of an enemy being poisoned are displayed on their Stealth Eye with special symbols so that the player knows what is going on and when it is safe to attack.

The side effect of using poison on an enemy is that it can drive them crazy and if another enemy is close by they will be attacked! This can be a dangerous situation because the enemy is unpredictable and could lead to the player being discovered. The chance of infighting can also be used to great advantage on large groups of enemies allowing for the pack to be thinned out so that individual targets can be picked off easily afterwards. 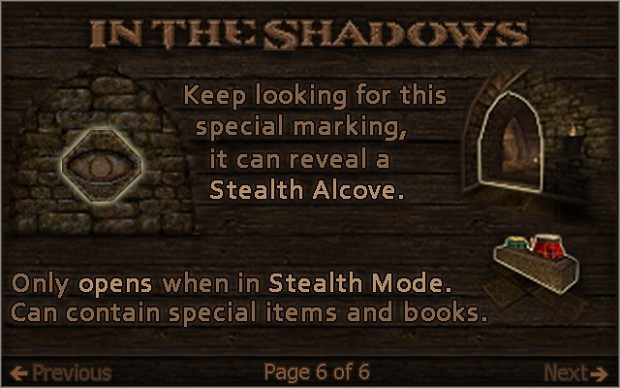 Scattered throughout the levels are Stealth Alcoves which are marked by a special symbol on the wall and will fade when the player is close by and has the Amulet of Shadows. Often these locations have extra supplies and some even contain shadow books which can give the player some extra hints and tips about stealth game play.

Stealth Alcoves are perfect for staging an ambush of enemies because when the Amulet is active the player cannot be detected while standing inside of the Alcove. These special locations often open up extra routes and shortcuts for bypassing the guards and are the perfect way to escape when being chased by an angry mob!