Learn to use mana, gain mana, multiply mana and where to pour it to summon viscious hordes of blood-hungry monstrosities.

Posted by EvgeniDisclaimer on Oct 4th, 2014

This time I'll tell you about mana and portals. Both are important aspects of player's interactions with the game.

While fighting your way through the level, you'll have a limited income of mana. You use it for summoning monsters and casting spells, so it dries out incredibly fast. I do not recommend standing amidst knight battalion without any resources to pay for your troops.

To counter that we placed several objects on the levels: cauldrons of mana and fountains of the same substance. Cauldrons are collectable items that provide you with one-time short burst of mana, while fountains are buildings that give you a steady income. And one more thing to defend: enemy troops can capture them and get all that precious mana for themselves. Do you really want to give your enemy the precious mana? Does that sound wise to you? Really?

Portals are more crucial to your conquest. There won't be any if your portal is captured. That building that you see first when level launches is the one most important entity in the game. If enemy gets to it, you're done. Game over. You summon creatures through this worm hole. It is the only passage for them. 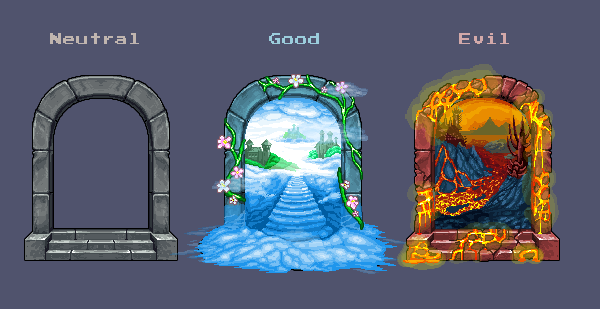 Defend it, capture it, conquer with it. (Still working on slogan. That's about 80% of desired coolness)