This article will give more insight into the Khergit Khanate's army : its composition, strengths and weaknesses. 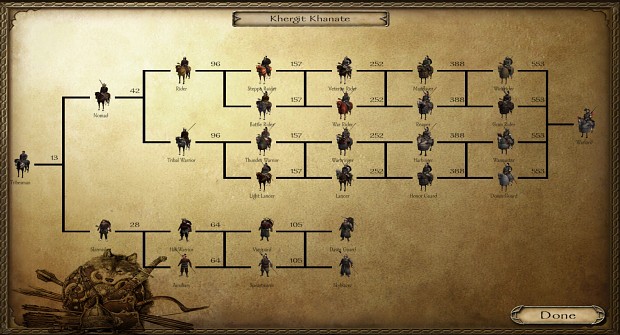 
The Khergit Khanate, as one expects, fields almost only cavalry. Nevertheless, any experienced Khergit lord knows that randomly sending a bunch of horsemen at the enemy isn't enough to achieve victory. The Khergit cavalry force is divided into several types, some of which are purely ranged, others focused on combat, or a mixture of both. Combining them efficiently is the key to victory.

A typical Khergit army will consist mostly of lancers and horse archers. The horse archers are meant to stay far away while the lancers are more suited to charge and retreat tactics. Warbringers and War Riders are respectively heavier lancers and horse archers, with more staying power but lower speed, which makes them particularly useful in situations where speed isn't as helpful, for example against opponents that field a lot of cavalry or in sieges. Finally, the Khergit infantry, albeit inferior to its counterpart of other factions, is specialized in siege warfare and is quite useful in those situations.

The bulk of a Khergit army (tiers 4 and 5) is divided in 6 different troops :