The inspiration behind the creation of novaWARS - Star Control, Master of Orion, and Babylon 5!

As the open Early Access preview of novaWARS nears release, I thought I'd share the origin story so you can understand where we're coming from and the spiritual heritage of what I hope will become a landmark mobile series. 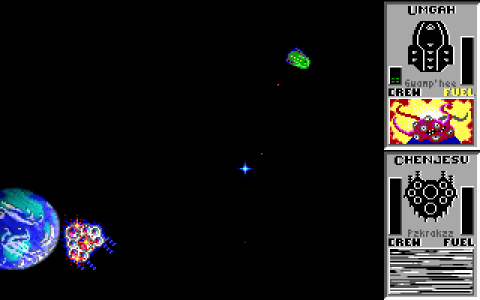 Star Control gameplay - the crystal ship has been caught by the planet's gravity.

It all begins back in the 1990s, in the hey-day of sci-fi. While Captain Picard was buzzing around the galaxy in the Enterprise D, Star Control was released for Amiga and MSDOS. It was a one-on-one space combat game with 14 diverse ships each with a main weapon and a secondary ability, and a planet with gravity in the centre. Combat was tactical as well as skill based. Gameplay was so tight and satisfying that I sunk many, many hours into it, both in PVP two-player combat and in the single-player tactical game which used a randomised star map to add a strategic element.

It was also the heyday of the 4X strategy game, games about entire civilisations waging war across the vastness of space. I was heavily into Master Of Orion 1 and 2, and Ascendancy, which for me were all about the awesome research trees. Ascendancy set a new landmark for gobbledegook scifi tech names, like the 'Van Creeg Hypersplicer' and 'Murgatroyd's Knower', while MOO2 had gorgeous pre-rendered graphics for each invention. You'll see their influence in the technologies of novaWARS.

Meanwhile, on TV we had the series Babylon 5. This introduced far more aliens and ships and more space combat than any other scifi series, culminating in the Battle of Coriana VI - an awesome, epic battle that showed thousands of aliens and a huge array of vessels in pitched combat.

Scenes from Babylon 5 and the Battle of Coriana VI.

It was around this period that I discovered hex editing where you could hack the data in a game. On consoles you needed special hardware (Action Replay cartridge) but on computers you could change the binary executable itself. Poking around with Star Control, I found I could modify all the properties of the ships to set their speed, turning, firepower, to whatever I wanted.

Hex editing a file. Some of those hex numbers denote properties of a ship.

This sparked the idea, what if there was a game where you could design your own ships and engage in these epic space battles? After all, the properties of the ships were just numbers...

The last piece of the puzzle was when I got my first smart phone, a Samsung Galaxy Ace. Here was a device with many times the power of an Amiga computer, so I was excited at all the amazing games it'd get. Only it didn't. Mobile became all about tappers and in-game consumables. Where were all the proper games? The problem of course was the controls, with touch screens not working at all well for arcade games. So I had to come up with a solution to that, and with five different, highly tuned control schemes, I'm confident you'll find novaWARS succeeds admirably and finally brings console-like arcade gaming to touch screens.

Bringing this all together, novaWARS is the first step towards a much larger dream. It expands on the combat of Star Control with varied environments and customisable ships. It indulges in the colourful scifi technobabble of Master Of Orion and Ascendancy. It brings tight, polished space combat gameplay to touchscreens with exceptional gameplay and depth, and will grow beyond just the best space game on mobile to become one of the best space games ever. Follow novaWARS and join the discussion to help shape it!