A mysterious species in a remote area of the galaxy has to decide whether to join the war or not. What is known about them?


Vuun is a humid low-gravity planet in the southern east of the galaxy. It is almost completely covered with swamps, but also there are a few seas. It is home to one of the very few intelligent non-animal species, the Vuun. Little is known about these mysterious entities, because communication between them and other species is rare, but it is almost sure that they are plants...

The Vuun look pretty much like mangroves, but their roots seem to be their legs, and as they converge a torso emerges. The torso isn't even almost as big as the root part, and carries a head with a huge backpart consisting of branches that proceed parallel in the shape of a very long crown and this crown contains a huge, long-shaped brain.
The fore part of the head is relatively small and consists of a face with two eyes and a spout-like mouth at the bottom end.
Their roots are at the same time their legs, and they can indeed use them to move around, while they also acquire water, nutrients and minerals with them, just like roots normally should do. The roots are normally not very deep in the ground, so the Vuun individual doesn't need a lot of force to get them out and move. The big amount of legs maybe was one of the reasons why they developed such a big brain. The Vuun can however dig into the ground very deep to ensure they stay where they are.
The Vuun still have leaves, but they probably lost some over millenias, for unknown reasons.
The Vuun reproduce like other plants, for this they sometimes grow flowers on their body to lure insects, which then carry these to another flower from a different plant. This doesn't happen often however, because these insects are active in "summer" only, and these "summers" are very short and only happen every 4-5 earth years. Which might be a reason for the loss of some of the leaves, as the Vuun had to find other ways to gain their energy. How they and other plants from Vuun managed to do this is unknown.

Here is a badly drawn image that is supposed to show how a Vuun individual looks like: 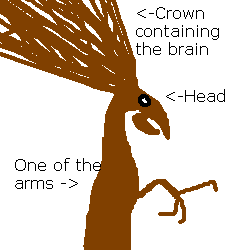 The Vuun's past and their powers

The Vuun are able to carry their huge brain due to the low-gravity on their home-world.

At some point in their past they discovered the powers they posessed due to their highly advanced brain. They were able to use telekinesis to perform work much more effective than they could do with their arms. Soon the telekinesis allowed them to develop further, a society was born and the brains became even stronger due to excessive use and thus training. The Vuun developed language, culture and civilization and started manipulating their environment to better fit their needs. Soon they had a responsibility, that came with their new powers. Thus, the new philosophicians of their race learned about morale and ethics and added this to the culture and society of the Vuun. The Vuun individuals are teached to never break any of the rules, and everything possible is done to ensure peace and unity among the Vuun. The Vuun developed very fast and were able to acquire a lot of knowledge, they also researched very fast and they probably were the first species to colonize another planet. But even with telekinesis they struggled at colonizing, as they need a humid environment and lots of water in general. They carry their brain with telekinesis on planets with high gravity, just like they support the engines of their ships with their powers.

Their democratic government emphasizes power sharing, and a single person in the government is almost powerless. But thus their government also consists of a lot of people. And the Vuun reproduce very slow, and need a lot of time to become adult. But also they live very long.
The government's main target is to ensure the integrity and independence of the Vuun realm. given the huge war that threathens the entire galaxy the Vuun have quickly built up a star fleet and prepare for a possible attack from the Entersians, Tecteron or the Phoenix. But more and more Vuun individuals demand, that the Vuun declare war themself and try to turn the battle against the non-democratic empires of the galaxy. Not only do they want to see the Phoenix defeated but also the Entersians and the pseudo-democratic Tecteron.

For a long time the Vuun stayed out of galactic affairs. As a neutral race and empire they were mostly ignored. Thus they don't really have sign any pacts or treaties. The most important thing is their non-aggression-pact with the Cadanians. Still the relationship between both isn't really strong. They are quite different although both are democratic. The Vuun are isolationistic and not really interested in war but in science and philosophy. The Cadanians however are extremely warlike and completely focused on defending their borders as well as bringing freedom to the people of the other races and empires.

The Vuun's realm is relatively small for a medium-sized power, and often they are considered the biggest small-sized power. The Realm consists of the part that is closer to the centre of the galaxy, which is named "Outer Hot Zone" and the part that is further away, the "Capital Zone", and last but not least the most remote zone at the edge of the galaxy, the "Safe Zone".

The "Capital Zone" is the zone of the capital planet Vuun. It provides ~65% of the entire manpower and also ~50% of the Vuun-controlled planets are in this area and it covers the entire middle of the Vuun realm. Thus it is the very important centerpiece of the "empire".

The "Safe Zone" starts right behind the most outer spiral arm of the galaxy and thus is VERY remote. It also is a very safe point, while it also suffers from a lack of resources. ~15% of the Vuun-controlled planets are in this area. It provides ~5% of the manpower of the Vuun democracy.
It is the least important area, but still important as a possible retreat point. The interstellar connections are only known to some of the fleet commanders and some important persons. The people in this area suffer from this isolation, as often the needed materials aren't provided, because very few fleets come here.

The ships of the Vuun are highly advanced. They have strong shields and are very fast. Other than that their ships are average in most areas. Their weaponry is a mixture of energy and projectile weapons as well as plasma cannons. They use some very exotic special weapons, for example drones that are mind-controlled by a Vuun individual on a ship. The Vuun's doctrines focus around quick movement and the ability to take a couple of hits without any damage. Often the crew of a Vuun ship uses telekinesis to increase the speed of the ship extremely for a short period of time in expense of firepower. This is often used to escape with a ship whose shields are close to collapsing. This is very important, as the Vuun cannot afford to lose too many ships due to their lack of manpower and resource-rich planets. That is also the reason why they use drones as fighters.