Whatever your opinion on the experience, The Ball stands as a great example of productive output which mod teams should strive for.

Teotl is the latest chapter of the Unreal Tournament 3 mod, The Ball. Not only does it introduce multiple new elements into the mix – chief among them is the physics-based combat – but it demonstrates Toltec Studio’s ability to prototype their design and deliver genuine content on a rigid schedule. Each of The Ball’s chapters has been released in concordance with the phases of the Make Something Unreal Contest. Like many of the other teams involved in the MSU, Toltec’s efforts have capitalized on the strengths of the modding scene: the freedom to trial new ideas and quickly iterate upon them. Whatever your opinion on the experience, The Ball stands as a great example of productive output which mod teams should strive for. 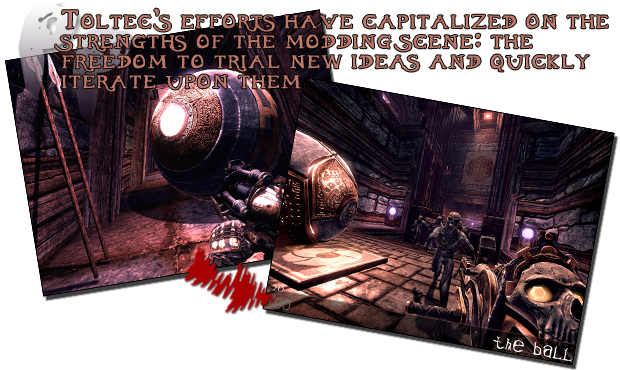 That’s not to say that gamers should be dismissive of it though. Quite the opposite – Teotl represents the most seamless build of The Ball so far. New features and art updates have been rolled back into previous chapters while new cinematics hint at the story behind your spherical companion and its domain. In this update, you’ll learn that there are more than just puzzles and boobytraps standing between you and the exit of these Aztec ruins. Loping mummies will stalk you at regular intervals, bringing some sort of life (unlife?) to the quiet remains of what was once presumably some sort of shrine to the gods. Indeed, the mystical ‘ball’ itself seems a direct manifestation of some heavenly power and is your only weapon used to fight off any attackers.

At its core, The Ball is a first person puzzle game. Splattering Aztec mummies with your magical sphere is child’s play at the best of times. There’s no real death penalty (due to limitations in how the mod was constructed) so you’re free to explore in absence of your rolling friend without fear of a major setback. This is where the mod misses out on a building a stronger player relationship with the ball. If there were more incentive to keep Mr. Roly Poly close to you at all times for protection, one might be more inclined to liken it as a savior of sorts - a view that would fall in line with its supernatural origins. It’s something that is better cultivated in the new survival gamemode within the mod; where you must defeat multiple waves of enemies without dying. Aside from this, the new combat does a good job of changing pace and introducing some action in-between puzzles. 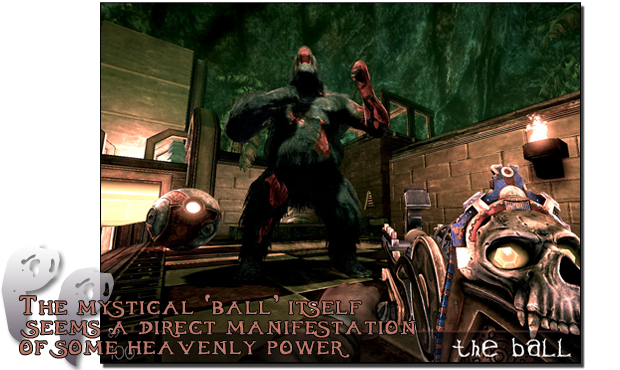 The new areas of Teotl achieve the same standard of quality set in previous releases. The puzzles themselves aren’t too obtuse that they’ll stop you in your tracks but employ some more variety this time around as Team Toltec experiments more with their formula. Unfortunately, what I expected to be a big finish for this chapter felt lackluster and a bit rushed. While they may have had to cut some of the final fight to make the MSU phase 3 deadline, I’m hopeful that the boss battle will receive some added emphasis in future installments. Judging by the way Toltec Studios has polished their two previous chapters in this release, Pehua and Oztoc, that doesn’t seem to be too far-fetched.

From start to finish, The Ball currently provides a solid 4-5 hours of entertainment. Even if you’ve played previous releases, it’s still worth starting from the beginning to see all the new additions in play. Though Teotl still displays a few rough edges, the polish given to previous chapters and the sheer amount of new content make this worth the download. 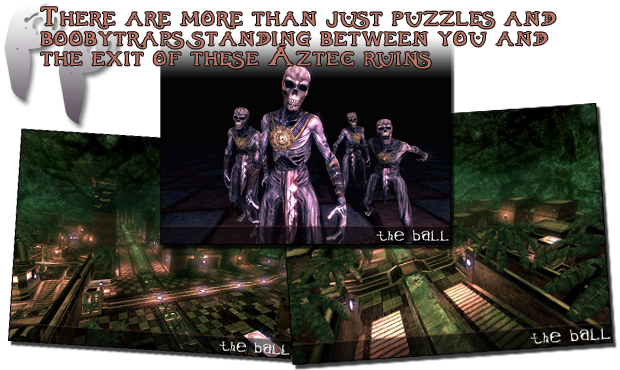 Better yet is the fact that Toltec have two more expansions planned. Given their uncanny ability to complete high-quality work within a reasonable time frame (read this interview conducted just after Oztoc's release to see how well they delivered on their promises), The Ball is one mod that you can expect to deliver.

I wasnt really mad about it. I mean the construction was perfect but sometimes a puzzle would showup that was really horrible constructed. Like the one where you in low gravity would push a box into a box shaped whole, no room for error.

Conclusion, other than some annoying puzzle ideas the mod is brilliant. Worth a try ;)

I HAVE to try this. I even have UT3, never played it.

Gonna have to look up a list of good mods for it.

I almost bought UT3 just for this mod. And while it didn't blown off my expectations, I guess it's quite a good achievement. I played from the start to Teotl II in one run and only exited because I ran over an over-complicated problem that I couldn't sort out. So far, the concept is great, the execution is great, the teaching is great, and apart for some rough edges like stenchy says, it's really good.