Every month the authors of the German games blog "Die Spielregeln" (The rules of the game), featured by the German site SUBPOOL, pick a gaming related topic to write a short essay about. "Modding" being the latest topic, one of the authors, Robin Krause, also a member of "Projekt A.R.I.E.L.", shares his thoughts about our SturmMOD...

What does it mean to play a mod? Let`s take the "SturmMOD" as an example, a modification of the First Person Shooter "Far Cry" which utilises the setting of the original game, a tropical island, to tell the story of William Shakespeare`s "The Tempest". The modification thus emenates from two originals: the shooter and the play. 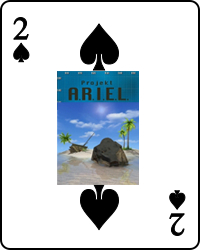 In "Far Cry" the player-character Jack Carver runs ashore on an island in the South Pacific where he discovers a laboratory for genetic experiments on humans. The game is considered to be one of the first to liberate the player from the linear narrowness of the catacombs typical for earlier shooters, providing him or her an opportunity to seek an own path towards the current destination and to explore the island through his or her movements. Stranded on an island as well is Prospero, the main character of the play "The Tempest", sent into exile by his own brother, as well as his daughter Miranda and the native Caliban. A similiar starting position and the island setting suggested a combination of the game and the play. In order to build the mod the two originals had to be deconstructed and reinterpreted. The same applies for playing the mod as the player has to de- and reconstruct the originals, especially if he or she is already familiar with any of them or both.

At the beginning of the "SturmMOD" the player is neither given an exposition of the plot like it is typical for a classical drama nor a tutorial as in video games. He or she gets no informations on who he or she is and no objective. As player you have run ashore as well. You are a nobody, fallen out of the sky, only in moving over the island you find single fragments of information from which a story constructs itself. Some of these fragments you encounter distanced, as if you were strolling through a museum, for example Prospero`s wrecked boat. Other fragments only become visible through action. They drag you into the story. As, for example, you enter a tent at the beach you find yourself in the role of the native Caliban, approaching Miranda, Prospero`s daughter, out of curiosity. But her father misapprehends your convergence as an attempted rape. He tosses the player out of the tent and obstructs any further access. The player thus witnesses the banishment of the savage first-hand.

Through a constant change of positions towards the narrative the experience of the play`s story in the "SturmMOD" is active as well as passive. While the originals - "Far Cry" and "The Tempest" - determine the mode of reception to either player or spectator mode the "SturmMOD" is not made for but by the recipient and is only apperceptible in the interplay of all elements.