Today we'd like to show you some first behind-the-scenes content of Star Trek Armada II: Fleet Operations, to learn more about how new features are planned, evaluated and implemented during development. It were the days of Beta 2, as a new alien race conquered its place in the Fleet Operations universe - the Noxter...

Today we'd like to show you some first behind-the-scenes content of Star Trek Armada II: Fleet Operations, to learn more about how new features are planned, evaluated and implemented during development.

It were the days of Beta 2, as a new alien race conquered its place in the Fleet Operations universe - the Noxter. Sadly we couldn't really achieve the swarm-like and organic gameplay feeling, that would be fitting for them, as there were far to many limitations. Now, with many new features added and a lot of new development tools at hand, they will finally swarm back at you! Development on the new Noxter has just begun. In the next month I will extend this diary with new facts and features about the Noxter, as they are being implemented.

Today let's talk about concepts. First things first: Gameplay and mechanics. The Noxter are planed to have a very unique style. That already starts with 'vessel' construction: Living beings are not built, they grow up. Something similar will be done for the Noxter. Special organisms, called Breeders, may consume small Noxter eggs - called Seeds - that contain genetic information, the "blue-print" of a new species. Once a Seed has been consumed, a complex metamorphosis is triggered, completely changing the behaviour of the Breeder. It starts to constantly reproduce new Noxter, according to the seed's structure. As such extensive protein synthesis consumes large amounts of energy, a breeder can only survive within the swarm and must be fed, consuming resources.
Those unique concepts of economy give a Noxter player some very special things to take care of. Once a Breeder has absorbed a seed and begins evolving new beings, you have a constant supply of organisms at hand. But once your resources run low, your Breeders may die of hunger! The priority to hold a stable and secure home base - the swarm - is probably much more important for the Noxter, then for any race. That fits to the organic character, as the swarm contains the thing that is most valuable for a Noxter - its mother! To underline that, there are many interesting things planed for the swarm.. but lets talk about that next time.

To finish our first Creeping trip, here are some concept arts for the Noxter. There is basically no Fleet Operations model or gameplay element, that has not been drawn in the first place. Thats a very important step in order to ensure a uniform design through the whole game and to plan your models and textures in later stages. You can also predict performance issues - something that has to be thought of when planning something organic and animated. 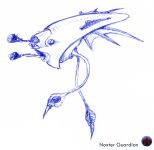 Some military Noxter species. A Noxter guardian and a large, net-like organism, that may wrap itself around vessels to slowly consume their hulls

This should be interesting but the unlimited resources option make make them unbalanced. Build loads of breeders and set their rally points (if they have any) to the enemy base and leave them to it. No need to worry about them starving or to queue up new units for production except for more breeders.
Of course hardly anyone plays with that option so should be fine.
I might try this out against AI though to see how effective it is.

Thing is that more breeders will consume more resources, so I'm sure it'll all be balanced in the end. I look forward to seeing them in action.

Thats where the unlimited resources part of my post comes in. No worries about running out or even needing to aquire them.
Same applies for all races really though, but here you don't need to queue up more units once they're built, leaving you free to concentrate on command.