Alexander Sullivan from Small Dev Talk invited us for an interview about Leviathan Crossfire. We gladly took the opportunity.

The Raken Empire has a new secret weapon called the Leviathan! It is your job to stop this weapon before it is too late. Not long ago, I got the chance to talk with the developers, Dominik Höke and Thomas Meyer from dhk Games and get a new in-depth look on their upcoming game Leviathan Crossfire. A new sci-fi first person shooter game. You can check it out at their official website at Levcrossfire.bplaced.net

Dominik: Leviathan Crossfire is a science fiction short story. It is a small First Person Shooter that’s still under development.


Small Dev Talk: What is the story in Leviathan Crossfire?

Dominik: Leviathan Crossfire has a very, very generic sci-fi setting. There are two human factions in a war of centuries for the resources of their planets. These planets are Nuvebia and Rakan, the factions are the Rakan Empire and the insurgent Nuvebians.

‎But now, after many years of war, the Rakan Empire is secretly constructing a new weapon that may end this war. The Nuvebians reveal this plan and the players will be in the role of a Nuvebian soldier who has the save his home planet.

Tom: We released a pre-Story Game, where you play as a Rakan-Space-Marine and your task is to prevent the revelation of the Leviathan Construction plans.

Dominik: The ‘Leviathan’ is the secret weapon that the Rakan Empire is secretly constructing, by the way :)

So the players will have to destroy the Leviathan in the final game.

Tom: To lead the player deeper into the Story, we will release a second prequel demo soon: You are a Nuvebian Soldier who actually steals the Plans and Construction-information in a covert operation. 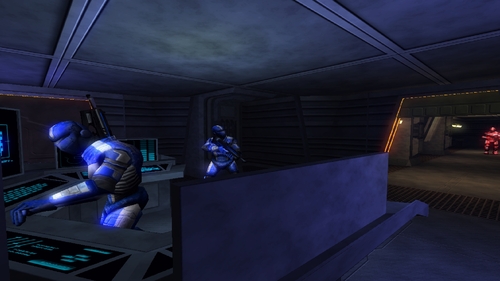 Small Dev Talk: What is the story behind the Rakan Empire and Nuvebians? Why are they are war with each other?

Dominik: Well, after centuries of war, you cannot expect anyone to remember the reason :)

No, honestly - the reason for this war does not play so much of role for the story. Since it will really be a short story in its nature, Leviathan Crossfire will focus on the situation the main character is confronted with.

However, the political situation of Nuvebia and Rakan in those times plus an upcoming fight for resources may play a role for the background of the story.

Small Dev Talk: What is this Leviathan weapon like and what can it do? Why is it so important?

Dominik: That’s the most important part about this secret weapon: It’s secret :)

It won’t be a huge surprise, rather a very classic sci-fi weapon. But since the upcoming prequel demo we are currently working on, ‘Leviathan Crossfire: Silent Assault’, will explain what exactly the Leviathan is and why it is such a danger for the planet Nuvebia, we just cannot tell it now.

Tom: The name “Leviathan” is based upon some history books. Everyone who knows the meaning of that name is able to get an idea of the “problem” with the Leviathan.

Small Dev Talk: What is the environment in the game world of Leviathan Crossfire like?

Dominik: The whole story will take part on space ships.

So they are the environment of the game.

Small Dev Talk: Who is this Nuvebian soldier the users play as in Levithan Crossfire?

Dominik: That’s a very good question… ehm, since we are still shaping the details of our game characters, we cannot give a 100% perfect answer. We currently have the idea of an elite soldier of a special team that is trained for infiltrating enemy space ships.

Tom: Due to the dangerous situation the Nuvebians have to deal with, they’re sending out some special forces called “Protectors”. A Protector Team contains four highly trained professionals with separate abilities.

Dominik: The story of the game will give some details about the background of the characters of the game, just as good story should do it. But we’re still playing with some ideas. This is the basic idea we are currently working with.

Small Dev Talk: What are the hide-and-seek mission like?

Dominik: They are pretty cool :)

They are in some way like the Prypiat mission in Modern Warfare: You avoid being detected by the enemy and sneak around them to fulfill your mission. That’s the feeling we are trying to capture for these missions.

Tom: The player has to reach achieve certain goals while avoiding hostile soldiers. The player may be able to do this by circumventing enemy patrols or distracting enemy guards in order to stay undetected.

Dominik: So they are the strategy part of the game. 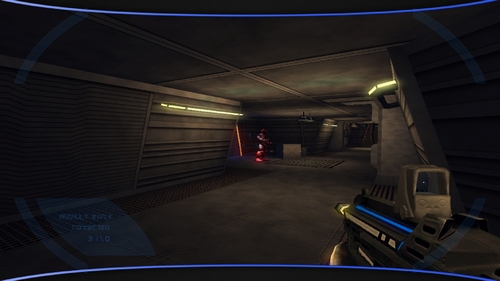 Small Dev Talk: Will there only be a single player game or will it include other game modes and/or multiplayer?

Dominik: We are focussing on a single player campaign with high replay value.

We do have ideas for multiplayer as well but we don’t have them on our radar right now.

Small Dev Talk: What type of weapons will the players get to use in Leviathan Crossfire?

Dominik: There will be four different weapons. We will equip our players with a futuristic Assault Rifle and with a Laser Blaster sidearm. They can also choose to make use of the powerful Atomizer, a weapon that fires a lot of projectiles with high spread. And then there will be a classic Sniper Rifle available for long range high accuracy shots. 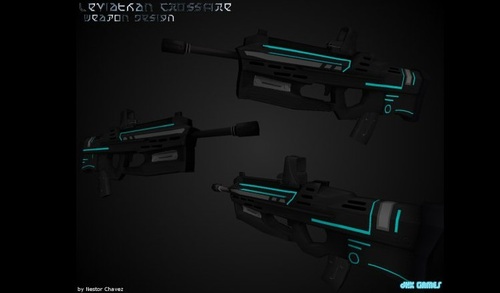 Dominik: We definitely cannot compete with this ‘big market’. Leviathan Crossfire will be a niche product, that’s clear. We will tell a short story with a classic setting in a rather unusual way. That will be the unique thing about it. 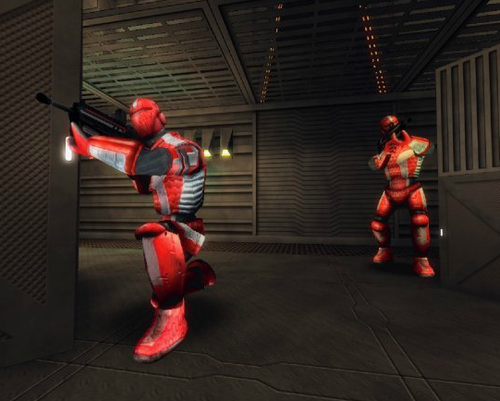 Small Dev Talk: What inspired you to create Leviathan Crossfire?

Dominik: We have quite a lot of resources of inspiration for this game from very different directions and with different weight.

It’s hard to list them all… many sci-fi games, movies, but not only the sci-fi genre.

We never had that one 100% clear vision of the game but rather a wide range of ideas what Leviathan Crossfire could be like. And we are still changing and developing these ideas while we are producing the first demos.

There are pros and cons for working this way, but it allows us to create a game we see a lot of our ideas realized in instead of not changing the game vision during the development because we have a deadline or a fix list of features we designed upfront the development process.

Small Dev Talk: What is your favourite aspect of the game?

Dominik: There are two aspects I love about Leviathan Crossfire. One is definitely the story telling. It will be very close to AAA titles for the upcoming demo (at least, that’s how I currently feel about it; the players will have to decide about this at the end of the day, of course). The full game will then probably even go beyond this and be a true indie game which means, to me, that it will introduce some nice new ways of how to tell a story in a first person shooter.

The second aspect is creating emotions. The emotion of really being in this situation the main character is confronted with or the curiosity of players playing a new game for the first time and seeing something they haven’t seen done before.

Curiosity is, of course, just a first step; the question is always what a game makes out of during a single player campaign.

Small Dev Talk: What challenges did you and your team come across in the development of Leviathan Crossfire and how did you overcome them?

Dominik: There are so many challenges in developing any kind of video game…

One major challenge is probably that we are both no experienced developers but hobby developers. And we are developing our first 3D game, not to mention a first person shooter - a genre with highest player expectations.

And then it is very, very hard (and probably the art about producing video games) to bring the wild pictures that are inside your head into an actually working and entertaining game. This is difficult in so many ways… but it’s fun to do nevertheless! 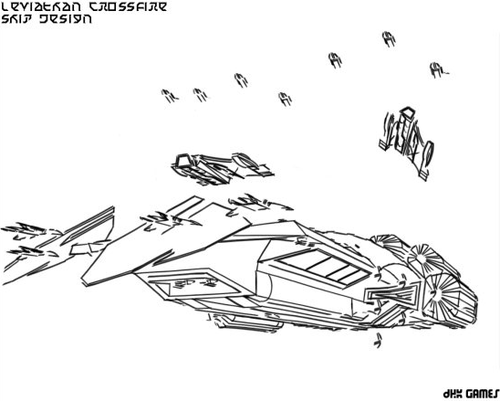 Small Dev Talk: Are there any advantages or disadvantages to being an indie developer?

Dominik: As an indie developer, you are free to experiment. Usually, you don’t have deadlines and you can develop your game the way you want without having a publisher how to do it.

But I don’t want to say publishers are ‘bad’ or have ‘bad’ ideas, it’s an advantage and disadvantage at the same time: You do not have the professional support, not only the money, but also the knowledge a publisher has. You are not only free to experiment, but you really have to experiment in fields where you wish you had more experience.

Tom: One advantage about developing without a company is: You don’t have to report to any supervisor. You can decide in which direction the games developers.

Small Dev Talk: What engine does your game run on?

It’s not one of the very powerful free AAA engines, but yet a highly underrated engine.

Small Dev Talk: Do you have any advice to upcoming developers?

Dominik: We are upcoming developers ourselves… in the best case :)

ut if I had to give an advice, it would be two things: One is to learn how to really bring the images from your head into the video game (this is the really hard part… I mentioned it already… it’s quite a topic for me because especially many FPSC users underestimate this point in my personal view). The other advice would be… Just ***ing do it! Don’t let anyone bring you down, don’t let anyone tell you to change your plans in a certain way and don’t let failures in creating the game of your dreams bring you down. Do your thing!

Tom: Schedule your tasks! Don’t do only the fun parts, when you are done with those and you lose your ambitions on the hard parts, then it’s hard to keep up the working progress. If you schedule your plans, you can reward yourself for every completed difficult part with a fun to do part. In other words: Don’t start a Stargate game by designing a P90 Machinegun because that’s fun to do. Rather start with developing an exciting story about some favourite characters.

Small Dev Talk: What is the expected launch date for Leviathan Crossfire and will it have a cost or will it be Free-To-Play?

Dominik: We do not have a launch date. It’s the classic when-it’s-done.

We are planning to launch the new demo sometime this summer.

We hope the full game will be good enough to be sold for a very low, definitely affordable price, but we haven’t decided that yet because we focus on developing a cool game in the first place, not on making money.

Small Dev Talk: Do you have anything to say towards the readers?

Dominik: Yeah, sure, the typical marketing stuff: Follow us on IndieDB or ModDB, on YouTube, visit our website and give us some time to bring you a cool demo! :) 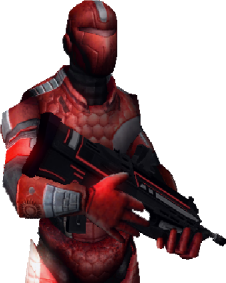