While you are reading this, someone somewhere is maneuvering terran dropships across a battle-scarred landscape.

While you are reading this, someone somewhere is maneuvering terran dropships across a battle-scarred landscape, constructing additional pylons, or ordering a flock of hydralisks to burrow for a devastating ambush.

StarCraft's longevity can be traced back to its iconic style, engaging gameplay, and memorable characters: terms like "zerg" in all its different meanings have become ingrained in gaming's vernacular, and many gamers have at least heard of the fabled Queen of Blades, if not seen her gleefully tear an enemy limb from limb first-hand.

StarCraft II: Wings of Liberty will take you back to the Koprulu sector and reunite you with many familiar faces from StarCraft and its expansion, Brood War, continuing the saga of the terrans, the zerg, and the protoss in new and innovative ways. Branching conversations with the game's varied cast of characters may open up surprising and unique new mission options. And as the leader of Raynor's Raiders, you decide which missions your crew takes on and which ones you save for later. The decisions you make will change how the game's story plays out; you’ll see certain events, cut scenes, and cinematic moments only by following a particular path in StarCraft II's mission structure.

Wings of Liberty puts you in charge, allowing you to forge your own path and become a part of the game's epic storyline.

Rather than offering a strictly linear campaign, StarCraft II lets players get involved more directly in the game’s story with branching, non-linear missions. Sometimes, players will face major decisions that could change the fate of certain characters or worlds. Other times, players can set aside specific missions for a while in favor of other jobs.

One example of the latter occurs in an early part of the game on a small farming colony located on a remote fringe world named Agria. After some daring heroics and righteous exploits, Jim Raynor and his band of rebels find themselves aboard their ship and receive a distress call from Agria, which has been abandoned by Dominion defenders and is facing a zerg invasion. Players can choose whether to heed the distress call or chase down an alien artifact to fund their own fight against the Dominion, leaving the other to tackle later.

"Behold the power of that which is yet unborn! For the swirling images that flow forth from the Chrysalis are only a shadow of the sleeper's true power."


One of the most important parts of storytelling is establishing a connection between the audience and the characters on the screen or on the page. The same principle applies to game design: it's important to first familiarize the player with the core gameplay before unleashing the more advanced challenges. Being one of the earliest missions, The Evacuation of Agria was designed establish some of the characters and their relationships while providing players with a test of their command skills as they escort the beleaguered colonists to safety.

It became pretty clear to the development team early on in the creation of StarCraft II that they wanted to include a mission which would put players right in the middle of a full-blown zerg invasion. This mission eventually became The Evacuation of Agria, an example of how StarCraft II uses storytelling to create an RTS experience that is immersive, engaging, and fun -- but like the zerg, the mission went through multiple transformations before it reached its final form.


"These humans have come a long way to make war on us."

The developers’ first step in creating a mission for StarCraft II is prototyping the core gameplay mechanic. Different missions offer their own twists, and often there is more than one way to translate a specific mission idea into an actual map. In the prototyping stage, the designer creates several different versions of the map, each of which features a slightly different variation on the mechanic -- in Agria's case, the evacuation of a planet. The point of prototyping is to see how those different versions play out and to identify the flaws and the fun in each.

One of the earliest versions of The Evacuation of Agria required the player to clear out colonists from several different locations on the map, which proved to be a problem. Frantically moving around, abandoning previously built defenses, and keeping an eye on all of the different evacuation routes turned out to be too frustrating and stressful for such an early map, and it distracted from the intended "zerg invasion" feel of the mission. Another version featured colonists marching toward their destination on foot, but the developers decided this didn’t quite fit. After all, no one in their right mind would go for a walk during a zerg invasion, especially if they were unarmed. 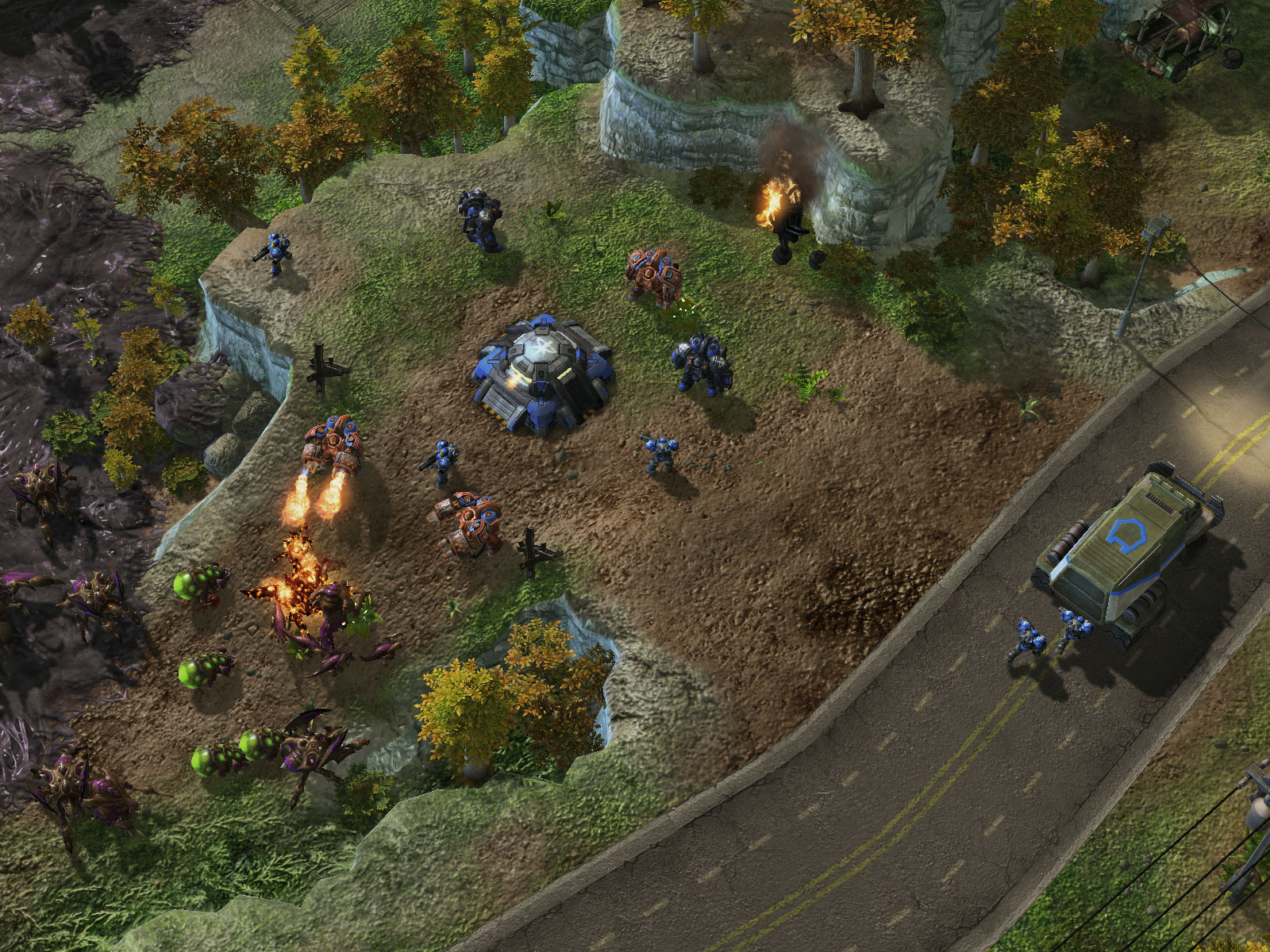 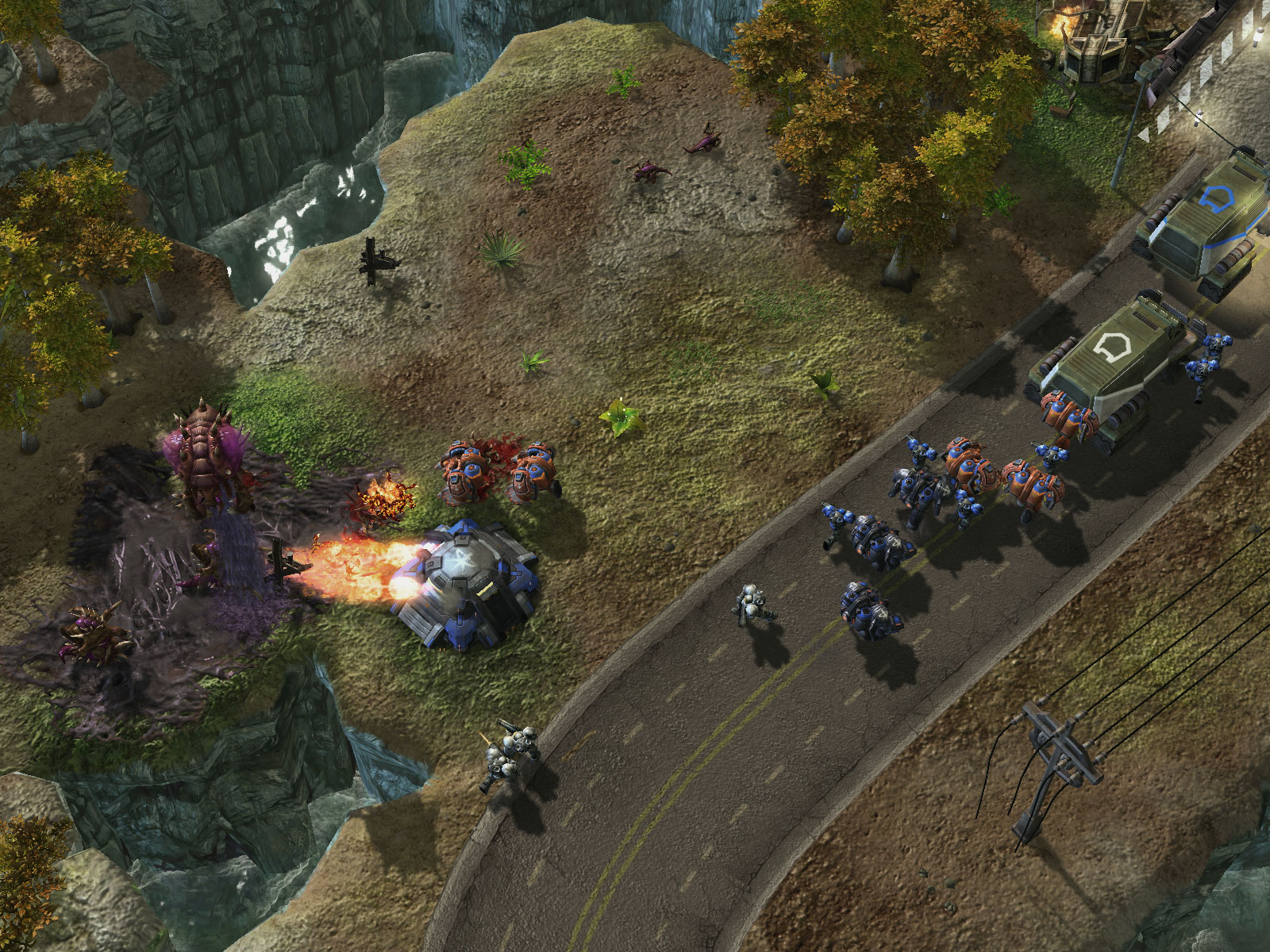 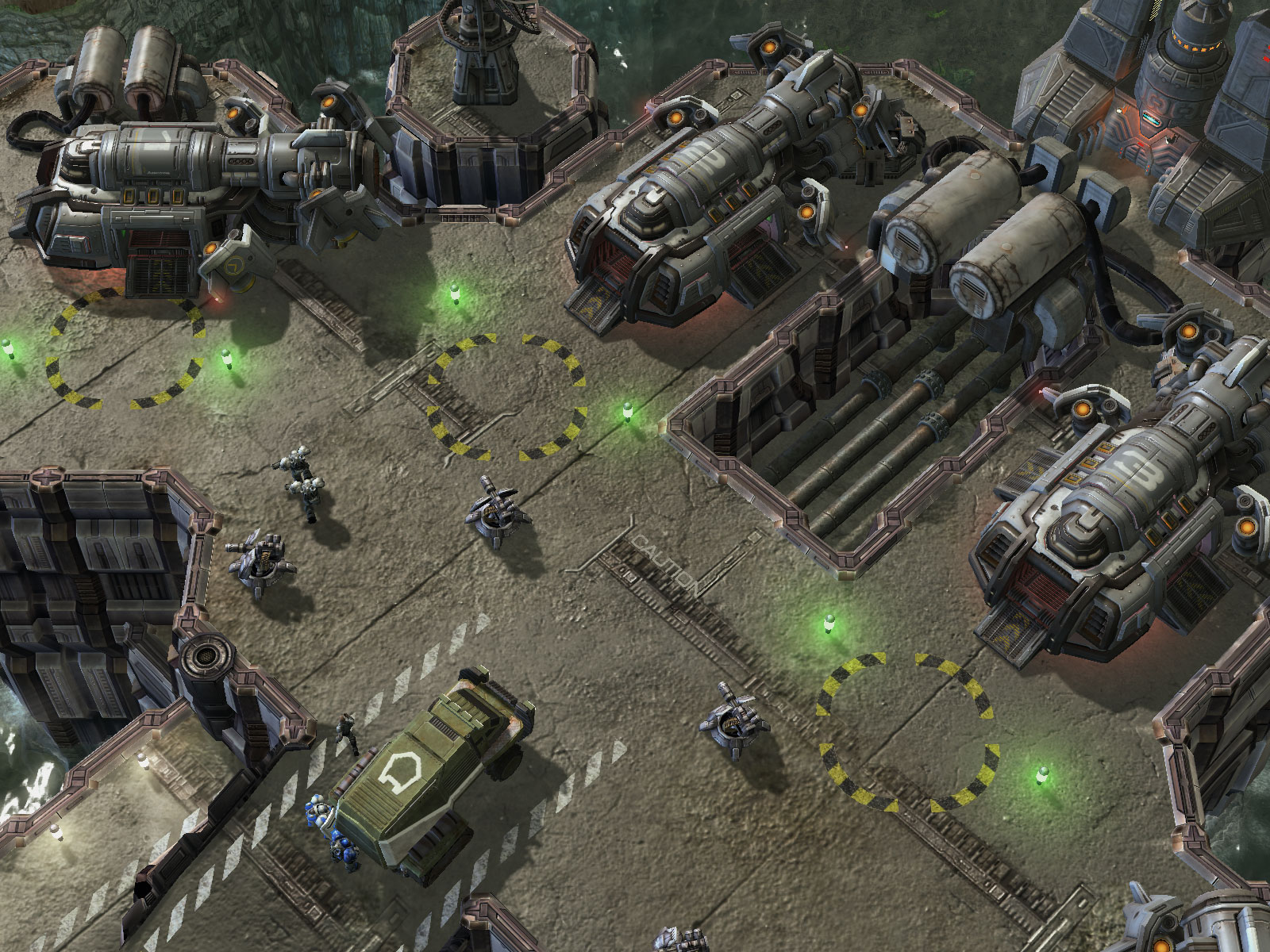 Establishing the right mood is important, but even small details can make or break a mission's feel. Making Agria too hectic and too intense made the mission less fun, and it took focus away from important plot points and character developments. The development team kept the player's emotions in mind throughout the entire design process, because even the most precise tuning can be undermined if the player doesn't feel like he or she is in control. Agria's evolution illustrates how mood, story, and gameplay come together in StarCraft II.

After (and sometimes during) the prototyping stage come several phases of organized playtesting: first within small team of developers, followed by a bigger internal test, until finally players from all across Blizzard take a swing at the missions. These playtests provide the designers with valuable input and a fresh perspective.


"They will all be mine in the end, for I am the Queen of Blades. None shall ever dispute my rule again."

—Kerrigan, the Queen of Blades Is the mission too challenging or too easy? Do the players know what they need to do? Is anything inherently broken or flawed? Does the mission make sense? And, most importantly, is the mission fun?
Storytelling improvements helped to make Agria more exciting. Some fixes were fairly simple: Instead of having the colonists walk across a zerg-infested landscape, it made more sense to pack them onto trucks that travel along a clearly marked road toward the evac point. Scattered along this road are bunkers left behind by Dominion forces that pulled out as soon as trouble reared its ugly, chitinous head. Dr. Ariel Hanson, a central character in Agria's story arc, points this out to players, serving the dual duty of drawing their attention to a valuable tactical asset while emphasizing the callousness and evil of the Dominion. 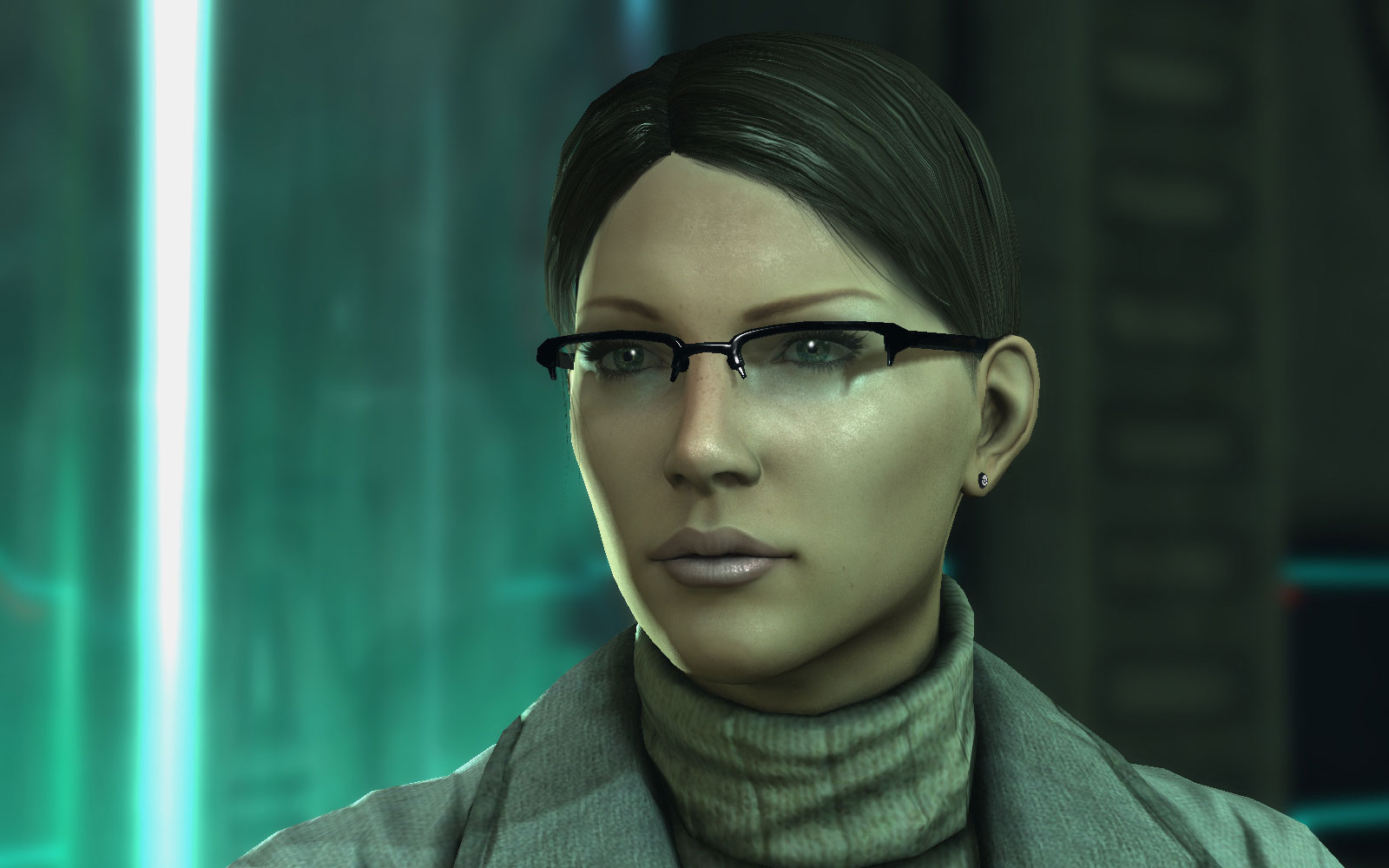 Small touches like this are designed to give the player a better understanding what it is that drives Raynor even after all the wrong turns in his life, while helping the player empathize with the colonists who were left to die horrible deaths. The people of Agria were abandoned in their darkest hour -- and then a man who was painted by emperor Mengsk's propaganda machine as a criminal, a terrorist, and an alien sympathizer does what no one else would do and risks his life to save some people he doesn't even know, simply because he feels it is the right thing to do.

Other changes were more subtle. Simply altering the initial mission goal of "Don't let X colonists die" to "Save X colonists" helped make the player feel more in control, and providing Dr. Hanson with a fortified position out of harm's way eliminated another source of stress. (In the original design, the mission failed if Hanson died, even if the player managed to save every last colonist.)

Over the course of much iteration, the developers’ goal is to mold The Evacuation of Agria and the game's other missions into a campaign that not only challenges the player's skill as a tactician but also tells a compelling story with memorable characters, interesting plot twists, and meaningful choices.

In StarCraft II, the decisions don't end at the mission selection screen. The Evacuation of Agria is designed so there is more than one way to ensure a safe escape for the colonists: you can hunker down in the Dominion's abandoned bunkers and set up a static defense along the road; you can assemble a large mobile force that moves along with the convoys; adapt a balanced mix of both strategies; or you can decide to do something completely different.


"The name's Jim Raynor, pal. And I won't be talked down to by anybody. Not even a Protoss!"

—Jim Raynor Whatever tactics you ultimately decide to use, Agria is designed to give you an understanding of the desperation and the terror facing the fringe worlds of the Dominion, show you first-hand how quickly the zerg Swarm can overrun an entire planet, and make you realize that your decisions will have a profound effect on the people you encounter.

Just like Agria, every mission in StarCraft II is crafted to challenge you with unique and surprising game mechanics and decisions. Whether you're saving colonists, assaulting enemy fortifications, causing mechanized mass-mayhem, creeping through horror-filled corridors, dodging lava surges, or nabbing alien artifacts, you are the one driving the story.