Introducing RUNE, an adventure-stealth hybrid with a lot of humor and interdimensional travels filled with puzzles and quirky characters. Learn about the origins of this cool but very daunting project, and start cheering for us along our journey!

Imagine that the next sixty years are spent in fear and conflict; all analog and digital data taken out of your reach, the peoples of the City forced into different castes, their cultural identities stripped away from them... and there is nothing you can do against CERNOS… Nothing you can ever do… To the point where you just forget about it, take them up on any offer, you cherish every little comfort they provide you. You don't feel their boots crushing down on you anymore. Why would they do that? You're just some guy.

And the only one who can -- who even WANTS to save you is a twenty-year-old marketing intern.

“Rune” is the working title for a game about life in the big city, oppression in the workplace, and valuing the Arts as a means of resistance. It’s an adventure game with stealth mechanics and its tone is mostly comedic and absurd with a few serious moments sprinkled throughout.

The world Rune inhabits can seem very dark and oppressive, seedy and violent, but it's closer to our reality than might appear – and all of its characters find some very comical ways to deal with the struggle of this pseudo-dystopia. 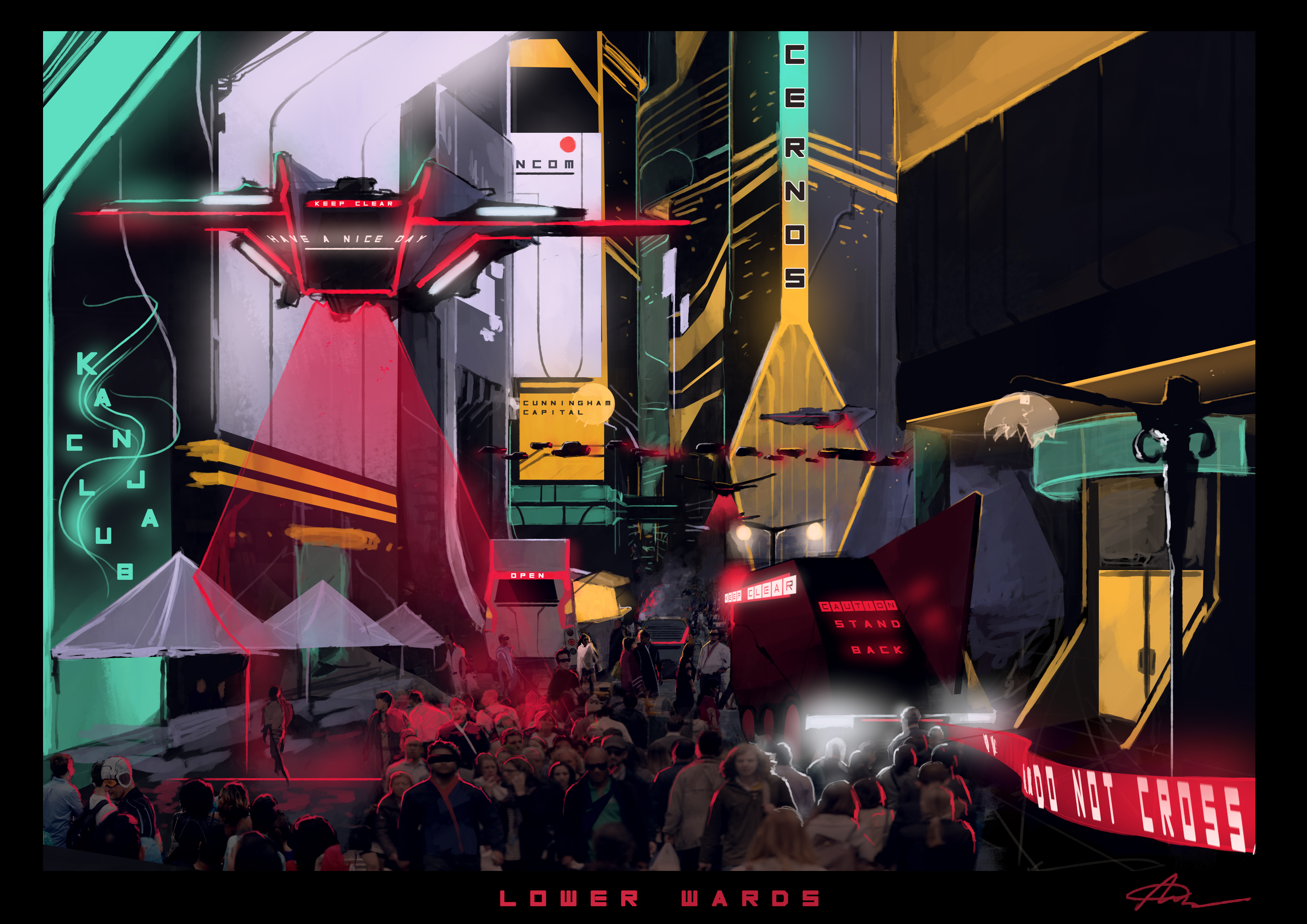 Last time I went to grab a beer with my friend Gabriel, this is the idea we had. I'd write a game and he'd program it. Planning things out only to improvise them later, diligently setting up Skype meetings (then Discord meetings), and banging our head against the wall: all parts of our routine since then. And one last, vital thing: dreaming about The Perfect Job.

The Perfect Job for us is working full-time on an amazing game, going home every day feeling like our daily worries and stress were in the service of creating something unique. It’s very hard to get that feeling with the way Brazil’s video game industry works – since there actually isn’t one. Basically anything except advergames is an experiment made without money. Very few studios get to work on interesting authorial projects, which means that getting a cool job in this context would demand a lot of experience we don’t have.

So what better way to learn our craft and get our foot in the door of a competitive industry than to make our own ambitious comedy-adventure-stealth hybrid? We got started right away, taking every work break and lonely Sunday to not really come up with anything useful for months and months – until the creative levee broke and we found ourselves an interesting story, charming characters, and a handful of great artists who fleshed out the project with their magical art thingies. "Drawings", etc. To exemplify this alien concept, here's a beautiful one of the Rebel Corporation's main offices, which the Rebels adapted from an old, progressive children's school (think Waldorf or Reggio Emilia). 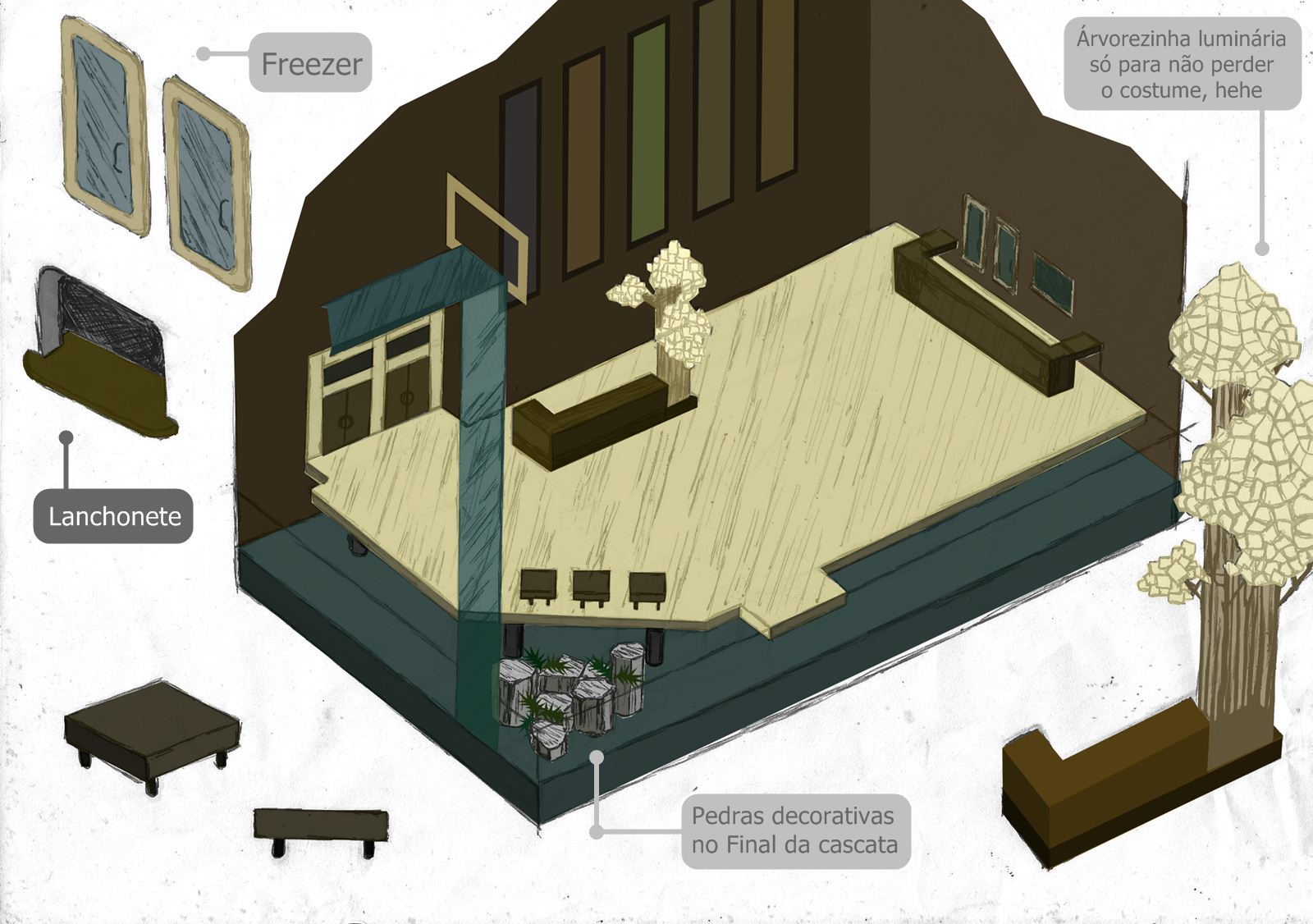 With its focus on funny dialogue trees and memorable story moments, it's safe to say that our game will live or die by its characters! A lot of care and attention have been going into our character sheets even though we haven't even started writing their official dialogue. We've adapted Tim Schafer's character sheet model to suit our purposes and almost every day I take a look at our cast and try to think of them interacting with each other and what kinds of situations would be funny for them to be caught in.

Such characters include Rune Amanayara, a lifelong dreamer who wants to join a group of Rebels to take on the evil corporation CERNOS, who control “The City” and censor every piece of history and art from before their time. At the start of her adventure, Rune finally gets accepted into the group – as a Marketing & SEO Intern. Turns out the Rebel Corporation isn’t quite as glamorous as she thought.

We've had three concept artists tackle the issue of how Rune should look and they've all been instrumental in defining her attitude and characteristics. We still don't have a final design decided on because we feel like most of this concept artwork portrays her as a much more serious character than she actually is. You wouldn't draw Guybrush Threepwood in this manner! Nevertheless, they've been doing amazing work and we're lucky to have such a talented team on this project. 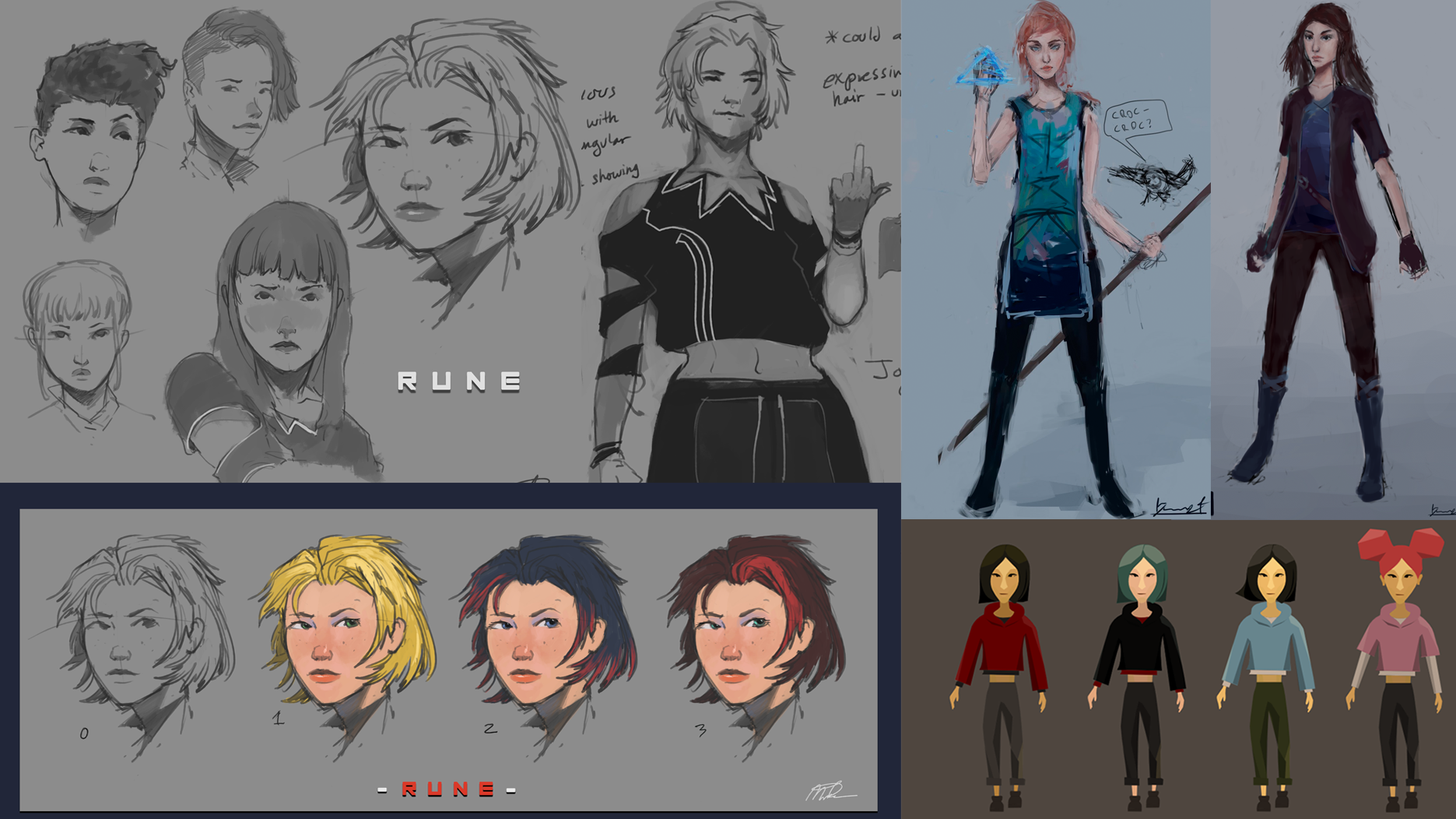 COMEDY AND THE COMMUNITY

We firmly believe that more games should center on comedy. Comedy can give any project a timeless charm and turn its characters into well-loved figures in the hearts of fans. Unlike most games that have comedy as a primary focus, though, we don’t really want Rune to sell like shit and be impossible to play legally in its 20th anniversary. So what can we do?

We build a community. Starting right now, on IndieDB and Facebook, we’ll let people know what we’re about and how much we’re failing at it. We then build upon those failures by making YouTube videos summarizing our experiences. With this strategy, any success we eventually encounter will be maximized as the culmination of a great underdog story!

Besides, humor is the single greatest asset of the most popular content creators on YouTube and Twitch, which makes it the most effective marketing tool for any game that gets to their hands – and there’s a very passionate niche for indie products in the videomaking / streaming community. If we make a sufficiently funny game there will surely be some bigwig streamers pretending to be funny themselves by reacting to said jokes with forced laughter. It’s the way it works! And we want in.

Easier said than done, sure. But as our visual material accumulates (expect some nifty 3D screenshots of a certain location in CERNOS' headquarters, a couple of cool screenshots of our recently-finished dialogue editor in Unity and last but not least a picture of myself pretending to write some shit down on a notebook), so does our determination to keep making this game increase dramatically. I hope that at least a little bit of that joy manifests throughout our devblog-bond, dear reader. All things considered, we want to keep these articles interesting enough that you feel like you wanna go exploring different worlds with Rune, as she enters a portal to a different dimension and what she finds on the other side... Is actually pretty funny. Right? 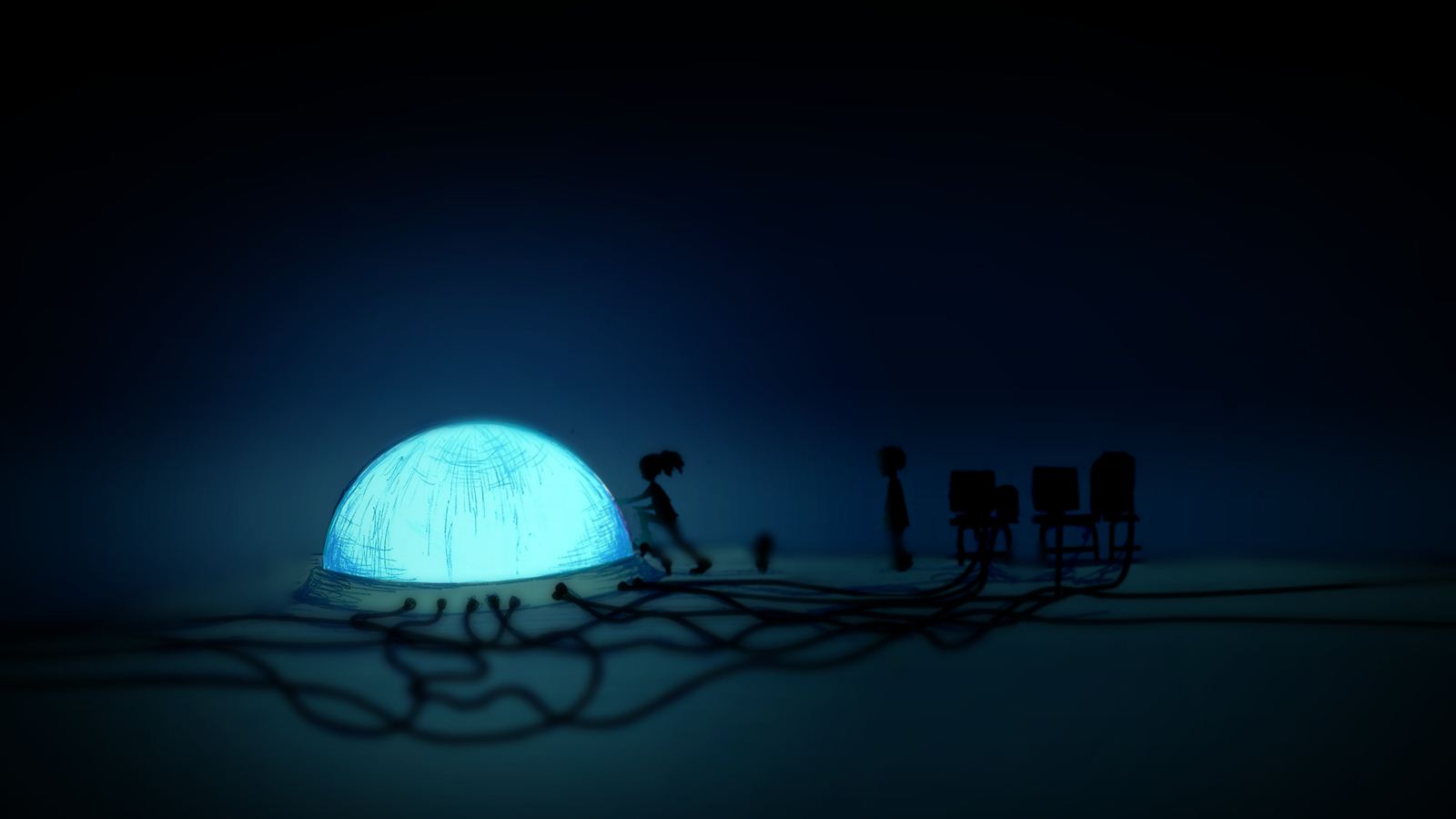 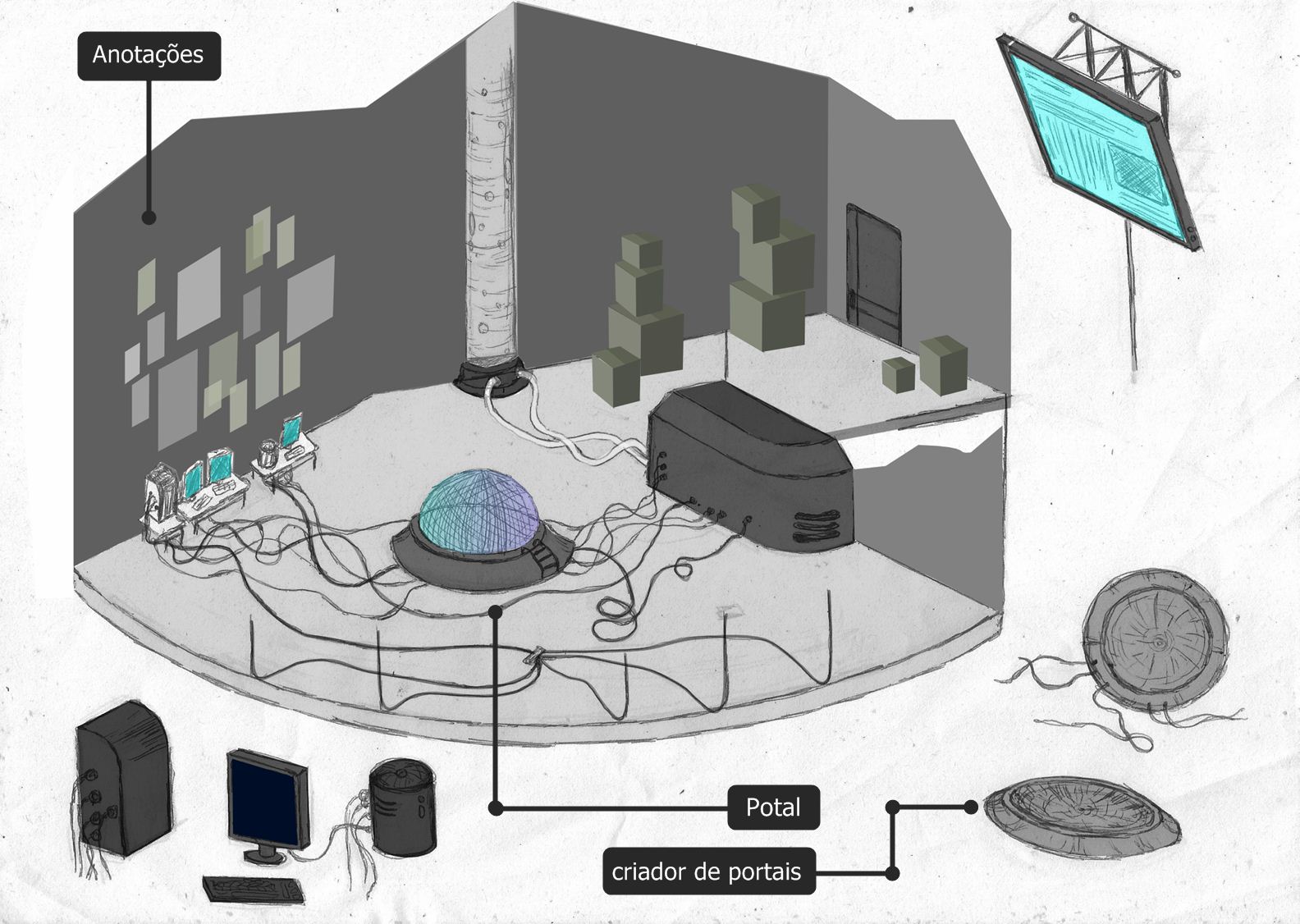 With all that said, it's time to wrap up our first article. I hope this piques your interest for a couple of weeks while we continue to work on our project. For our next post, we'll give some more information on the story and tell you about Rune's robotic sidekick, whose nickname is "Butts". Some mean robot colleagues programmed that to be his prime directive, which can be very confusing.

We'll also talk about the Rebels with a little more depth. Who are they and what exactly are they rebelling against – or used to be, before bureaucracy took over? Will Rune ever be able to dress as sharp as the Rebel Corporation's top executives? Find out on our next post! 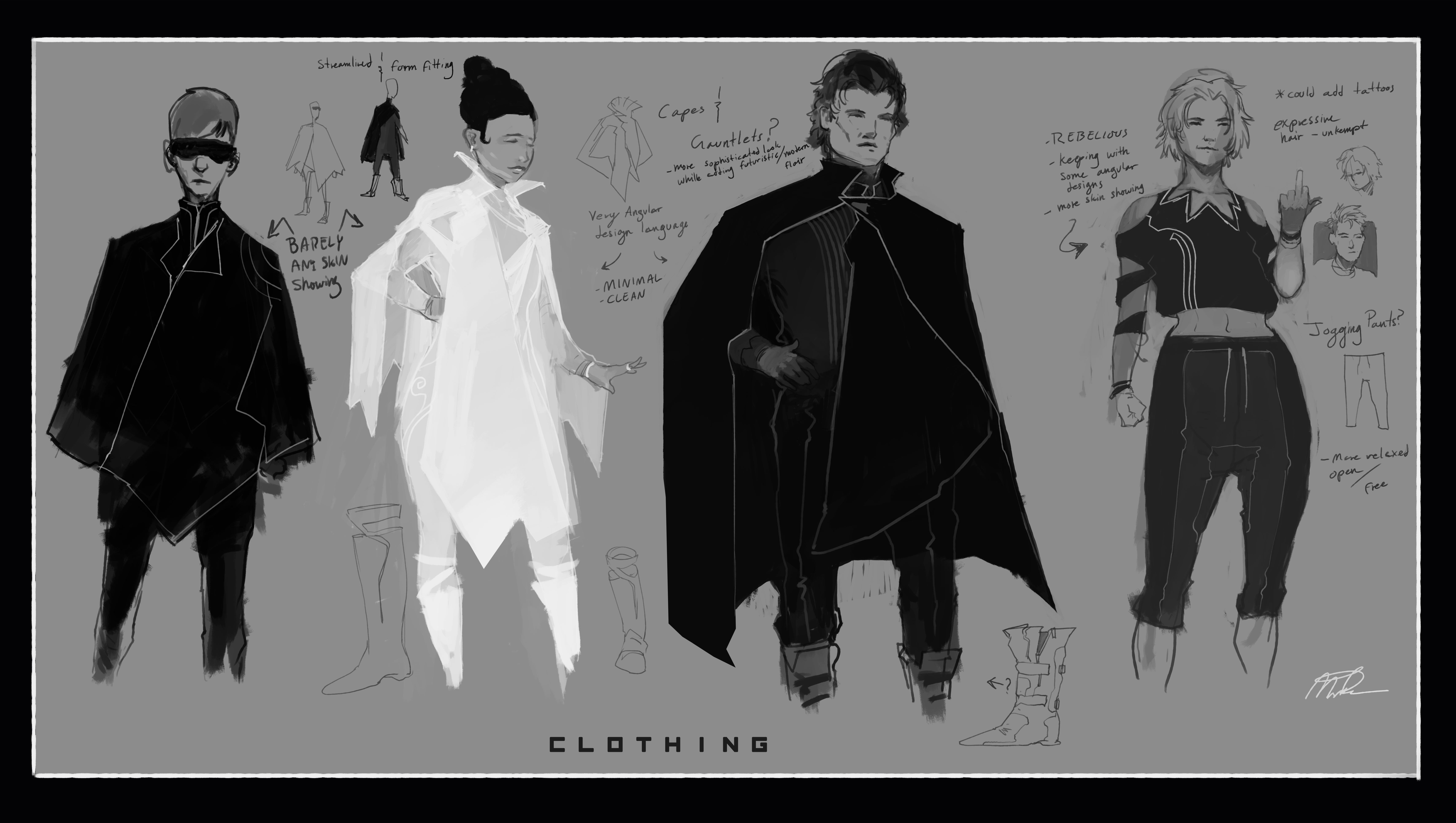