Summon and fight alongside the very developers of the FXmod in a chaotic, epic battle for survival at the heart of a dangerous phenomenon known as the Giant Chronospace Storm.

As a follow-up to yesterday's newsletter today I want to talk about another new feature that will be included in the v1.25 update. If you played the old FX:Commander mod you may recognize this as a returning feature instead. I am talking about the return of FX:The Legendary Fleet.

FX:The Legendary Fleet returns in the v1.25 update as a new Single-Player mission. In this mode you commandeer a Hiigaran unit and fight alongside the members of mysterious 9th Fleet, a rumored unit that is supposedly composed of units from all kinds of races who have rallied and banded together under a common cause. Your own unit and the 9th Fleet were recently caught in a strange phenomenon in the Sea of Lost Souls, a suddenly found themselves in forbidding area known as the Giant Chronospace Storm. In this area of space the different dimensions, timelines and even alternative universes overlap. Although the area itself is frozen in time, its unstable nature causes it to periodically warp in units taken from other races, other timeperiods, and sometimes even alternate universes -- universes in which the events that defined Homeworld1 & 2 transpired differently.

Your goal is to fight alongside the 9th Fleet and survive against the numerous anomalies the Chronospace Storm will throw at you. There are close to 10 waves composed of ships from various fleets and various ages, and they will be coming at you from four directions. Positioning is important, as is the approach you will take. Will you for instance build up a solid wall of ships in the middle, or try to force a breakthrough in one direction? The [Pause] key and proper usage of strikegroups will also prove handy - in addition to the members of the 9th Fleet themselves, of course. 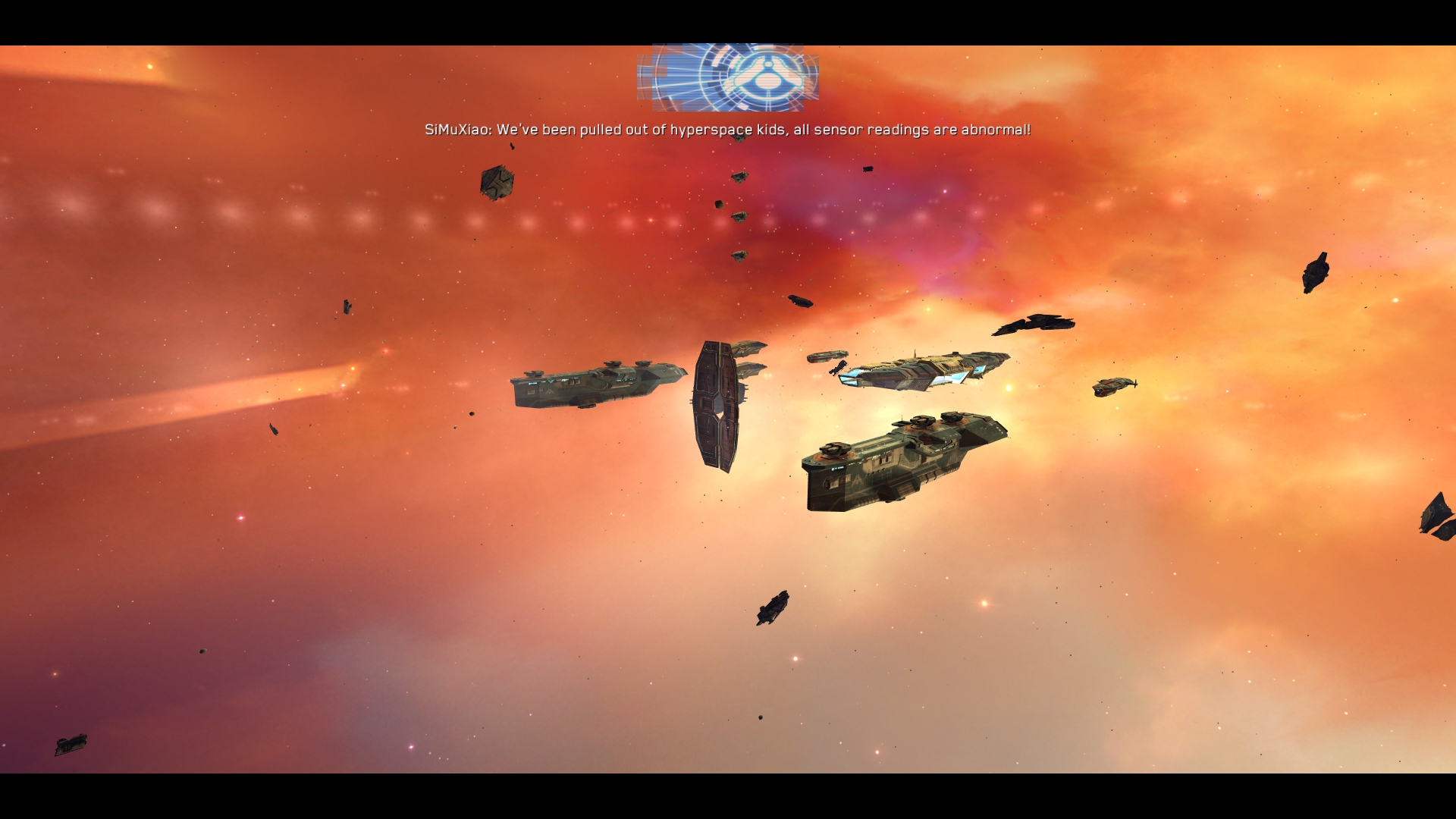 You start off as a Hiigaran carrier with escorts who is joined by SiMuXiao's Sensor Array. You can build units from your carrier as if it were a regular match, but in order to come out on top against the adversities the Choronospace Storm will pit you against you will need to call in the members of the 9th Fleet. With enough RUs SiMuXiao can setup an exit beacon point, so it is pivotal to gather resources - be it through harvesting, destroying enemy ships, or both.

To summon members of the 9th Fleet you can press the [P] button in-game to bring up the summon menu. Once you have selected a unit it will be able to escape from the Chonospace Storm and appear at your location, from which point on it will be yours to command.

Every single unit in the 9th Fleet is unique in some way, and will be very powerful when put to good use. However, they are not overpowered and can't simply crush the entire enemy fleet by themselves. Use them wisely, and be sure to support them with the proper stock Hiigaran units, aid them with repairs, strikegroups, and periodically have them dock - if a 9th Fleet unit dies it will be pulled back into the Chronospace Storm, and you will need to spend more RUs to summon it again!

Besides the 9th Fleet you will also be joined by Hiigaran reinforcements at the start of each new wave. These reinforcements will appear at your default spawn location (the center of the map), and range from regular units to production vessels such as carriers or even shipyards.

The game will automatically auto-save at the start of each enemy wave as well, so you won't have to worry about a 'hard reset' .. in most cases. 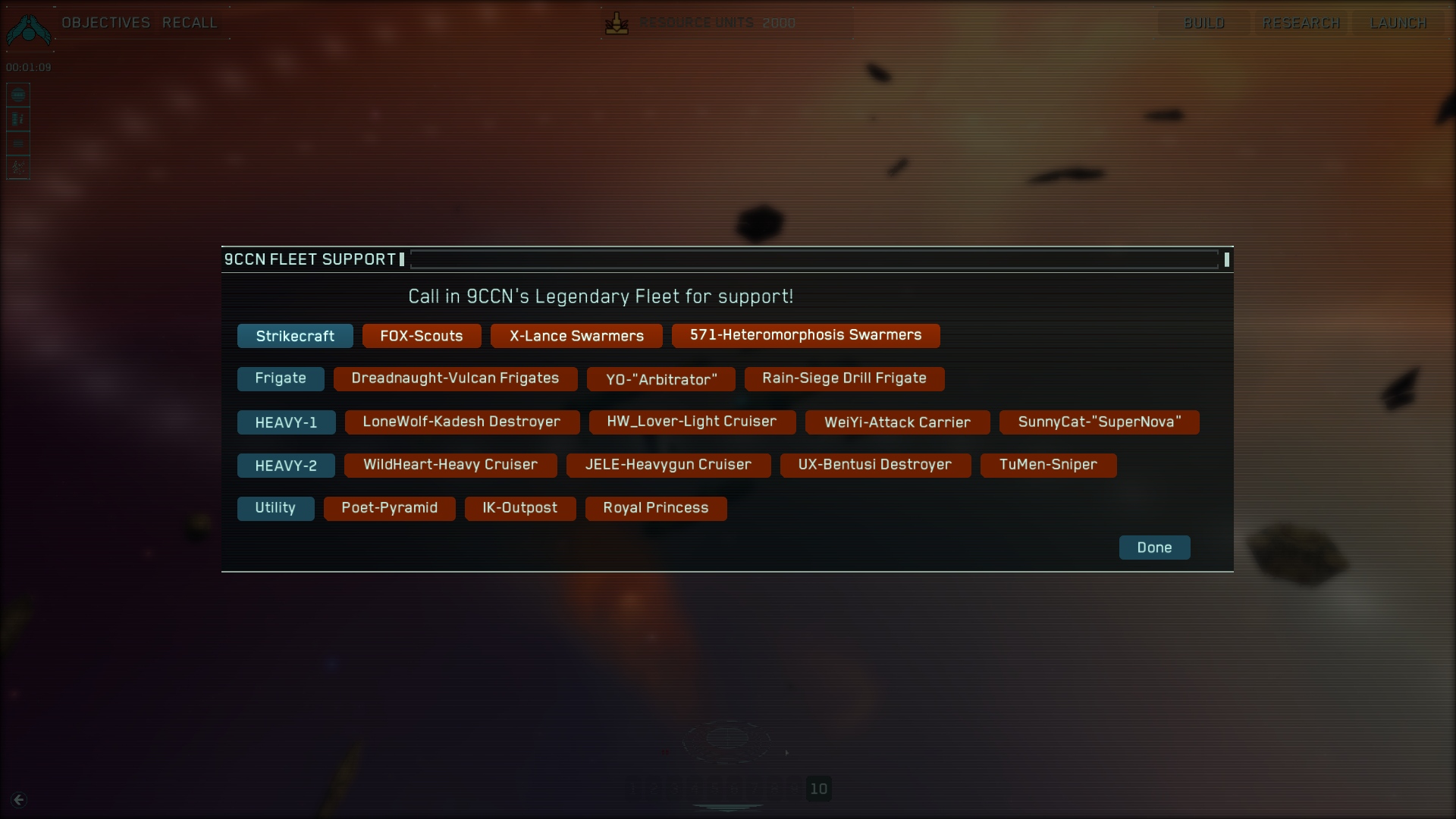 Another unique feature is the "comment" or Dynamic Unit Status system. Every unit of the 9th Fleet uses its own, customized dialogue, which will appear underneath the unit in real time. These statuses vary in nature: they can be references to members of the developing team behind the FXmod, the Homeworld Universe, modding, jokes, or comments that are very 'typical' of the person saying them. We wanted to give players the idea that they really are playing alongside the developers of the FXmod, and thus came up with this idea to make these ships feel a bit more 'personal'. You may, for instance, get the following comment when you order lone_wolf's Nagual to attack:

Well, let me read the manual... Combat 101: Point your engine module towards enemy...Wait, where is my ENGINE MODULE?!

With the joke here being that the Nagual doesn't have an engine module, and lone_wolf thus being in quite a pinch.

Unit statuses will automatically change every 10 seconds, and will also be adjusted based on the unit's remaining HP value (low-normal-high) or status (e.g. when attacking). 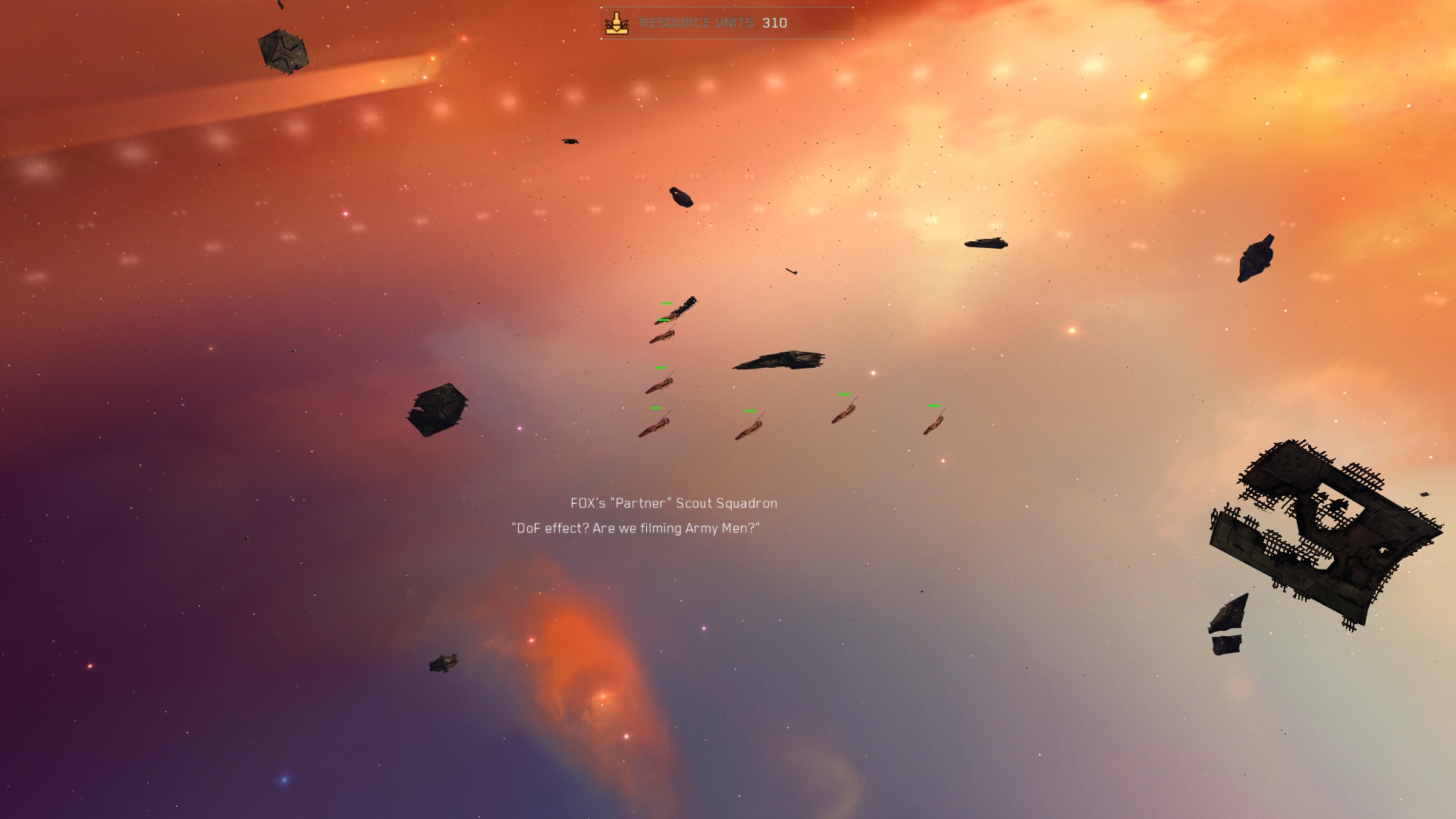 FX: The Legendary Fleet is coming this weekend as part of the v1.25 update. To those who possess the bravery and willpower to challenge the Chronospace Storm: Good Luck!