Info on features included in these mods for Brothers in Arms and how to use them.

Simply run the downloaded .exe file to install the Command Mod. Use the installer's default BrothersInArms (Or BrothersInArmsEIB for EiB) directory. Do not select the "System" directory, as you might with some other mods.

There are two ways to use this Mod. The first is to launch BiA with
the installed Shortcut. The Mod will be pre-loaded for the first map.
You can play any game (including Skirmish Mode), but if you quit to
return to the Main Menu, the Mutator will no longer be active. You
can reactivate it by restarting the game using the shortcut, or by
following the instructions below. 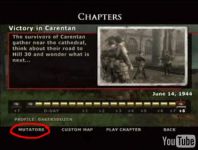 The other way is to start BiA, and from the Main Menu, select "Story",
then "Chapters". Click "Mutators" (at the bottom), then select
"CommandMod", click "Add" and then "Back" (at the bottom), then choose
which map/chapter you want to play. When you return to the Main Menu,
the Mod is not active anymore and you will have to repeat this step to
activate it again. Also, you cannot play Skirmish with the Mod using
this method.

(RtH30 requires the latest patch to run mutators using the menu described above.)

This is a separate Mutator that is included in this installation.
Activate it in the Mutators menu as above. It cannot be preloaded.

The Germans will attempt to flank and avoid being flanked, and will
sometimes even assault you and your squads.

Reinforcements from 1st Platoon, Fox Company 502 PIR (known as "Big Jack's Mob")
have arrived. They were split up for a special extraction mission and the rest
were reassigned to supporting operations by 3rd Platoon (that's Red & Baker's).
They won't be under your direct command, but they are no less determined
to see the success of the mission.

The Mob are extremely aggressive, perhaps crossing the line from
courageous into stupidity. However, their strength and tenacity are
unmatched. They will attempt to maneuver and flank
on their own. Some will follow you and your men, others will stay
slightly ahead.

If the Mob sees you order your men to target an enemy unit, they will
decrease their movement to provide supporting fire. If you order an
assault, they will whole-heartedly participate.

The Mob will try to allow your own men the best cover area, but
things can get crowded. Try ordering your men to areas that have lots
of cover options and, if possible, a safe distance behind so as to
give the Mob a chance to advance on their own.

Battle Zone:
If the Level/Map/Chapter is simply too crowded for the number of
enemies and allies, try the included "Battle Zone" mod instead, which
will introduce less soldiers into the battle.

Road to Hill 30 Maps are usually better suited for Battle Zone. The
wide open spaces commonly seen in EiB allow more freedom of movement
by the additional soldiers of the War Zone.

Enabling War Zone without Dangerous AI will keep one out of three
German Units mostly stationary. Enabling both Mutators will give
equal mobility to all German Units.

In Cinematic Pauses before, after, and sometimes during the missions,
other characters not controlled by the player (eg. Mac, Baker, Cassidy)
will be entering and exiting the scene. Sometimes, their path will
be blocked by the extra soldiers, and at other times, they will block the
paths of the extra soldiers. Sometimes, you may see soldiers simply
disappear instead of executing their usual exit routine. These
problems should not disrupt the flow of gameplay.

At other times, there may be important characters missing entirely, or
the entire game may pause waiting for an event that is not possible
for some reason. (EiB's "Roses All The Way" Chapter may be especially
troublesome).

In these cases, try reloading from the last Checkpoint, or try making
it to the next Checkpoint and load again from there. If you can take
the time, please email me ( rendrocmod [at] gmail [dot] com ) and I might
be able to fix it for a future release.

WarZone will have no effect with the RtH30 Map, "Rendezvous with Destiny".

Older video cards may have issues with all of the additional soldiers
in play. You may need to adjust your video settings to compensate.

New Commands:
-------------
Since some additional buttons combinations will be used for issuing
orders, you may have to change your key setup so that you can press
the necessary buttons simulaneously. Also, you may already be used to
pressing certain keys to Cancel the Command Ring. However, the only
recommended method for cancelling the Command Ring with this mod is
the "Use" key.

(More on these commands can be found below)

By pressing "Switch Weapon" while the command ring is visible, the
ring will switch to an alternate mode that will not target enemies.
Use this if your Target Icon keeps popping up when you want to issue a
Move Order. The Alternate Command Ring has a different color.

Targetting with No Suppression Icons:

This mod will make it easier to target enemies from behind cover with
suppression icons turned off.

The AI will try to stick to cover a little more, and has improved
capabilities for searching for better cover and firing locations.

Hold "Crouch" for a few seconds while behind cover, and you will get
an "Over the Helmet" view of Red. This is so you can watch all of the
action in safety without missing any of the excitement of battle.

When ordering an Assault, Double Click on the enemy (instead of single
click) and you will be able to view the Assault up close and
personal. Make sure you have cover when initiating this (Red will
duck while the Assault Cam is active).

Waypoints / Waypoint Mode:
--------------------------
Tap the Command button (do not hold it) and you will enter Waypoint
Mode. The Command Ring will stay visible while you tap the command
button for each location you want the team to pass through. You can
also create waypoints using any combination including Alternate Command
Mode, Maneuver Under Cover, or Pickup Panzerfaust.

Waypoint Mode ends when you order to Man an MG, Widen Formation, Target an
Enemy, or Assault, or when you press the "Use" button.

Fall Back: Hold "Fall Out" until the order is given. Your team will
fall back to its previous position.

Widen Formation: Press "Fire" while holding "Fall Out". Your team
will widen its search for suitable cover and vantage locations ,possibly splitting up.

Fall Out: Members fall out in place, dismounting any MGs and
disregarding any ordered Panzerfausts pickups, and tighten their
formation to standard.

Pick Up Panzerfaust:
Issue a Move Order at a box of Panzerfausts or
one that is lying on the ground and one of your members will pick it
up. You can also "Waypoint" a pickup; the team will pickup up the
Panzerfaust before moving on to the next waypoint.

Maneuver Under Cover:
Press "Melee" while the Command Ring is shown,
and the team will move in the crouched position and hold their fire
until they reach the ordered destination or they are shot at. This
may increase your chances of surprising and flanking the enemy.

Move and Widen Formation:
Press "Fire" while the Command Ring is
shown, and the team will move to the ordered destination and widen its
formation as described above.

Advance:
Press "Jump" while the Command Ring is shown, and your team will
advance beyond the ordered location. Use this if you want to order
your team to an area beyond an obstruction, or to occupy a
building.

Throw Grenade / Throw Smoke Grenade:
Press "Grenade" while the Command Ring is shown, and your team will
try to throw a grenade at the spot or enemy you designate.
Press and Hold "Grenade" to have them throw a Smoke Grenade instead.

Assault Tank:
-------------
Your Assault Team now has the capability to Assault Tanks. They must
have a strategic advantage or they will refuse the order. At minimum,
you need two soldiers still alive with at least one grenade, and
either the tank must already be seriously damaged or the team must
have a Panzerfaust. If the assault fails, the team will attempt to
flee to their previous location.

The Grenade settings have been fixed. Neither the US Troops nor the
Germans are shy about throwing explosives around. Also, they are more
likely to pick up a grenade and throw it back at you than ever
before. Close Range battles will be extremely dangerous for both sides,
even if they are behind cover. Remember to Suppress and Flank.

If you order an Assault and your team is in a good position, they will
now throw a grenade at the enemy before they rush in.

You now have Smoke Grenades as part of your standard equipment,
depending on the chapter. Press and Hold the "Grenade" key to throw a
Smoke Grenade instead of the usual Explosive variety. The number
of grenades you have left appear next to the normal grenade counter.

All AI Bots (US and German, Infantry, Tanks, and AT Guns) will fire
erratically into the smoke to try to hit their opponents. A lucky
shot here and there will still hit. Also, Suppression will be more
difficult since your team will not be able to focus your fire as well
as when they have perfect visibility.

Your Fire Teams will be issued Smoke Grenades as well. Press and Hold
"Grenade" while ordering to have them throw smoke into the designated
location.

Gearbox had the charactor actors record a bit more than is actually
implemented in the game. I tried to use as much of this as possible
to create a richer gaming experience. If you play this game a lot,
you will notice a few new phrases during combat. These are:

Incidentally, the Germans also speak some of these phrases (in their
own language, of course). I tweaked the frequency of some of the
phrases and tried to prevent the same person from talking over and
over, which can happen in the unmodded version.

A few more gestures used by the Team Leaders were also implemented.
These are: Get Down, Cease Fire, Fall In, and Point Out Enemy.

I enjoy a challenge as much as most of you, but the last chapter in the
game has a long and emotional cinematic in the middle. Watching it too
many times can lessen its impact, so I have enabled only the one Checkpoint
immediately afterwards. If you disagree with this, you don't have to
"Reload from Checkpoint" if you don't want to!

Thanks to Gearbox for providing the SDK and creating a wonderful
game, and to Botman and the other Gearbox Forum members for keeping
the BiA Mod Forum alive.

Permissions
--------------
See included CommandMod_EULA.txt
Please ask me first if you wish to utilize any of my code for your own use.

how exactly do i use the mods for skrimish?

You have to use the shortcut to start the game using CustomMutators.