The Realm of the Falcon Overview

The Realm Of The Falcon split up from Redwood in the early days of the Elvarie's arrival to Perisno. In 323 a few Redwood Nobles decided that endless wars and fruitless negotiations, led only by the intention to continue with the bloodshed "for the sake of honor", could no longer be their way and also couldn't provide the future, they dreamed of, for their people.They decided that it was better to live a rather poor and simple life than being just invaders and power-hungry plunderers to a land that was not their own.
Redwood, being constantly at war with the other kingdoms of Perisno, couldn't prevent them and their followers from leaving Forniron. They quickly disappeared into the great woods, adjoining the territories, later inhabited by the Hakkon, finally settling at the foot of the mountains.
The isolation they chose, protected them as planned from the persecution of Redwood and other Kingdoms and still being considered only another band of outlaws, neither Redwood nor other kingdoms were willing to sacrifice valuable ressources to go after them - they were left in peace.
A peace which allowed them to grow in numbers, using their good relations to some Tolranian lords to establish trade routes. After all, the Tolranians had come to Perisno for the same reason, those nobles and their followers had split up from Redwood and the fact that there were still lords of Tolrania, opposing these endless wars, made them sympathize with -and protect each other.
As they settled down, they quickly found out that there was already someone living in the woods nearby. A group of people with their own rites and believes. They were already followers of the new gods, living in harmony with nature. These people, as well as their believes quickly became part of the Realm's culture and today nobody could tell assuredly who aligned with whom, but something that for sure can be said is, that their believes were very similar to each other and therefore brought no reason for a struggle.
So from the beginning, The Realm Of The Falcon not only respected other folk, but their animals as well and being partly Elvarie still, they used their strong empathy to become friends of the creatures they were depending on, rather than dominating them. They had learned that bonds thus established are alot stronger and more effective. A reason for this as well might have been the ever rising number of refugees from all corners of Perisno, affiliating to their population and knowledge. Desperate people with hopes for a better future for themselves and their children arrived, after rumors of a somehow peaceful life in the Realm Of The Falcon reached their ears. They were Tolranian peasants, Maccavian Smiths and Traders from the Reich, fleeing the tax burdons and inhumane treatment by their lords.

So after a few years, this growing community blossomed into a sovereign State that at last gave itself the Name "Realm Of The Falcon" originating from the falcon that assists their nobles on the hunt. For hunting on horseback with a falcon was a discipline the lords brought from Redwood and the falcon being a symbol for witness, agility and chivalry...
But a community growing bigger also had to be well protected, so in 340, when more and more caravans got raided by the Hakkon Emperor on their no longer secret but rather long routes, the lord's council decided to build up an army, incomparable to others and very hard to defeat. Still lacking the strength in numbers, compared to the other states, they decided that only a strong cavalry could be a big enough deterrent to protect them from being extinguished again in a surprise attack.
Heavy-heartedly they implemented a conscription, knowing that the perspective to get killed in one of their lord's wars, had been the reason for so much folk to join the Realm in the first place. Nevertheless most people understood and in 341 the first recruits mounted their horses; formidable horses, for they were descendants of the Elvarie horses, brought by their owners from Redwood and one of the reasons as well, because of which the caravans had gotten raided so often.
For their horses were the most important trade good of The Realm Of The Falcon and the "Golden Hall" in the center of their only city could never have been constructed if not with the income that horsetrade had generated. This was only possible, because more and more terrain of the great woods had to be cleared with the growing number of people that crops had to be grown for. These grounds were also best suitable for horse-breeding.
From 341 on, there were more and more skirmishes with the Hakkon Empire and fears grew within The Realm Of The Falcon that an open war might become unavoidable and was only postponed by the empire because of continous fights against the other kingdoms...
In 345 then, the war broke out, but it turned out that The Realm's strategy of enhanced cavalry was most effective. The Lords had elected a Marshal that temporarily had the same authorities like a king. Only temporarily though, because those Lords believed in a more democratic way and most of them remembered the consequences in laying too much power into the hands of a single individual.
The man they elected wasn't even a noble, but the oldest son of a Maccavian family that emmigrated to the Realm Of The Falcon in 325. He had shown himself to be very skilled as he had climbed the ranks of the new build army unbelievably fast, showing extraordinary intelligence, tactical intuition as well as courage. His name was Gunnar and after his victory over Emperor Hakkon II in 346 in the Battle of Amarna he was honored with the honorary title "The Falcon" after he had conquered the city.
Amarna was later returned in exchange for recognition and the guaranty of the trade routes. The Hakkon Empire had underestimated the Realm's strength and in particular the determined militancy of its priests, that, fom their appearance alone, can instill terror on someone. They were ignorant enough to take on Gunnars troops in an open-field-battle, which led to their shameful defeat.
After the peace agreement, the army was quickly rebuilt and the Realm Of The Falcon flourished through trade like never before, for the trade routes were then considered save, at least from the Hakkon raids. This, of course, incited desires within the other kingdoms for the wealth thus created and only through means of extremely cautious diplomacy, The Realm Of The Falcon avoided another war until...
In 365 it happened...
Rumors of a new invasion to Perisno reached the Realm. The people shuddered upon the atrocities that were said to be comitted by the unknown foe, much harder to defeat as any other army. And again the Lords decided to send Gunnar to oppose this new great danger that had come over the already war-torn lands of Perisno... 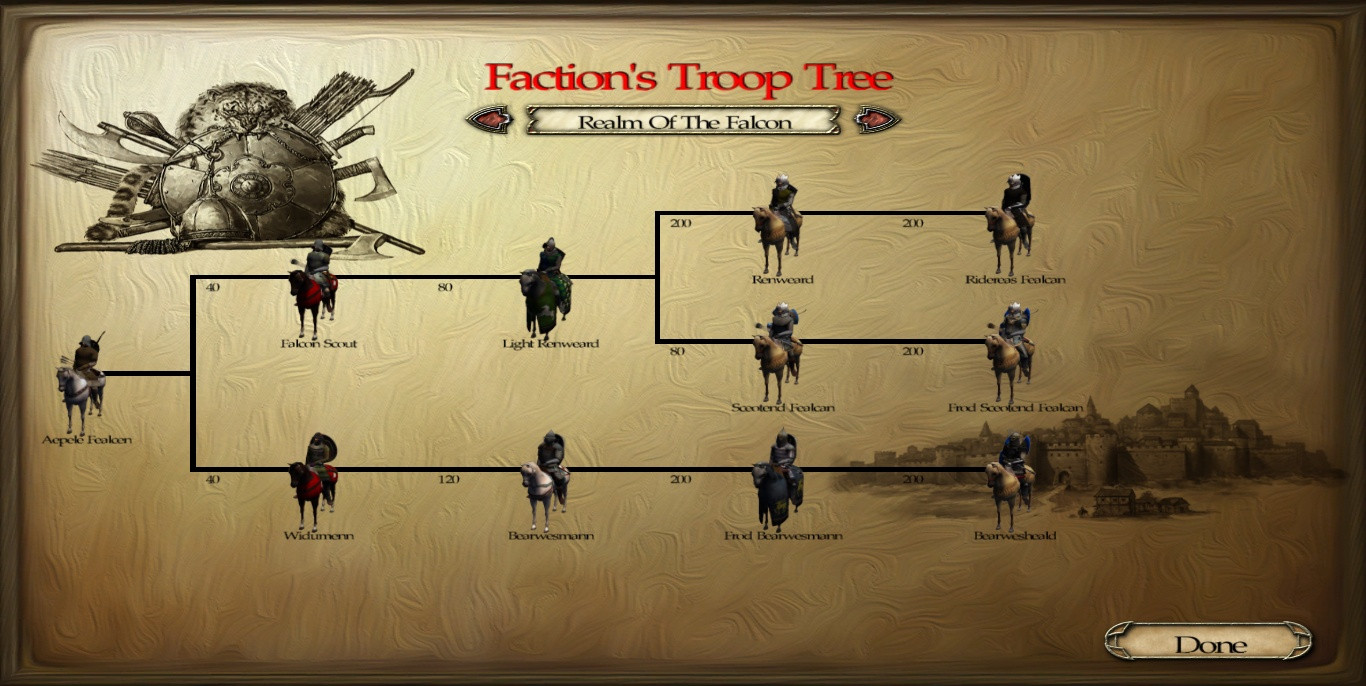 they need more realms and then they would actually attack (because they need more lords you see) what is needed to be added 1-2 cities 3-5 castles and the according villages. You think they'd set up by the ocean considering they do border it and would allow for ample trade (due to how actual civilizations they set up by oceans or rivers for supply, water, food, sanitation, ect. ). You see the other race you placed into the game, dwarves are nearly fine because they go under the ground into the mountains and so there trade would be largely based around the basic dwarf stuff (trade & craft goods, ore, and weapons & armour). In saying this they would have to have farms on the outside for food and to actually trade those goods to travellers and merchants. I'm just going to send you a message lol.

Why I cant recruit realm of the facon troops at the beginning of the game? I was with no faction, but the realm of the falcon villages dont have the option to recruit volunteers, no one.