After many months of studying and researching old scriptures from different sources, both official and fan-made, we have created a compendium of Etherian lore. Warlords and warladies, today we would like to present the knowledge we gained about the High Elf race. 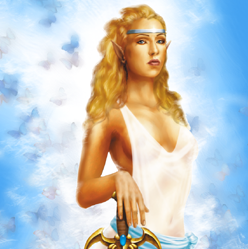 Most races are too uneducated or short-lived to know the legacy of the high elves. In a time when time itself was first recorded, all elves were united under the Citadel of Ice, Ehlariel. In this era, also known to the elves as the Years of Glory, elves were as powerful as they were graceful and elegant. It is thought that many of the ancient elves, such as Queen Ehlanna, Elcor the Healer or High Mage Thyatis, were some of the most powerful creatures to have ever walked the face of the world – short of only the gods themselves. Elves are all slender, graceful, intellectual and incredibly capable with magic. In ages past, they crafted masterworks that have only ever been compared to those of the dwarves. Although the creation of such artifacts has diminished since then, new works that evoke the skills of elder times still appear on occasion. High elven expertise with the bow is legendary, but their skill in melee combat is a thing of the past. Elves are trained with the bow from birth, and only those who have lived long lives of diverse experiences ever master swordsmanship anywhere near the skill of their elders.

Elves were once a very peaceful race, but since the construction of their citadel, they have known only strife. 914 years after they first founded their citadel, orcs led by Gornak decimated the elven people, terrorising them and razing their beautiful cities. This was only the start of the endless conflict that shaped high elves into what they have become. In 922 came the Years of Strife. Mordaine, before he had become the Sunderer, strived to found a new type of magical college to ward against any further invasions. For the first time the White Council was called and the elven peoples were divided. Elves grew suspicious of each other, which intensified further when Inarion was crowned as the next Moon King. The tension between sides festered for years until disastrous plots were enacted – including the assassination of Queen Ehlanna II. This instigated a 12-year civil war in 930, which ultimately resulted in the splitting of the elven peoples into eight nations. These became Damanoc, Silvermyr, Solhaven, Khazdhul, Yrm, Mordanion, Duimenwood (or Doomwood) and one other that was scattered throughout Agaria and thought lost (these became the Wild Elves, savage and brutal).

Over the next three millennia, the high elves only experienced loss and the gradual decline of their people. They faced dark elves, dwarves and even the dark gods Sartek and Bane themselves. Ehlariel itself fell. Now, they guard the daemongate of Sunder – a twisted hellscape which, if left to its own devices, would result in the end of Etheria. In order to survive against overwhelming odds, they have had to forget their former lives and transform themselves into a military force. Where once was tranquillity and culture, there is only belligerence and militancy. Their very souls have had to become rigid and sharp. They are governed by strict rules, promote only military duty and are incredibly suspicious to the extent of paranoia. Even age-old allies can be received with a cold demeanour, perfectly reflecting the frigid northern tundra in which they live. High elves believe it is their duty to defend Etheria and that all others just get in the way of that task. They are reluctant to accept aid even in dire situations and can appear bitter or emotionless to both friend and foe.

It is common for high elves to be born and to die within their homelands. It is very uncommon to see a high elven force outside of their domains and extraordinarily rare that any would be outside of their domains of their own volition. They tend to keep to themselves – communicating with others only when deemed necessary. Despite their military doctrine, high elves have a strong sense of religion and tend to worship Iris, the goddess of nature above all others. Their founding of the White Council, which communes with the gods, is both famed and feared throughout Etheria. Religion is almost as much a part of their lives as their rigorous training. Some speculate this to be the last remaining fragment of their former selves, but high elves are loathe to confirm it.

High elves have to live day-to-day with the knowledge that their race both persists on the brink of destruction and stands between the ancient enemy and the annihilation of Etheria. Despite their dwindling numbers, the high elves maintain a fierce and stalwart resistance that has become iconic of their people.

Very cool storyline. I did not that HE society was geared only for War. They may become my favourite Elves.