Today is the great day for another portion of some delicious news. As many of you already know, we tried to keep the pace and we were adding a lot of new features to the game each month. We got to the point, where we were satisfied with the amount of content we put in and decided that it’s a good time to take a short break from the flaw of the new changes and work on some bug fixes, balance and AI improvements in order to provide to our valuable players an interesting and exciting gameplay.

Today is the great day for another portion of some delicious news. As many of you already know, we tried to keep the pace and we were adding a lot of new features to the game each month. We got to the point, where we were satisfied with the amount of content we put in and decided that it’s a good time to take a short break from the flaw of the new changes and work on some bug fixes, balance and AI improvements in order to provide to our valuable players an interesting and exciting gameplay. We hope you guys got tired from nuggets who were hitting their heads into the wall or were so lazy, that actually were standing on the same place and were just chilling. In this patch we said enough of those stupid Nuggets! Let us introduce you a new Universim Pathfinding system v1.0. Our new pathfinding system is able to solve all (most) those issues and allow players to feel that there is some hope in their civilization and maybe stop kicking Nuggets butt in order to force them to move. With the introduction of our new pathfinding system, we tried to solve the major issues with Nuggets AI and improve the workflow of the game and make it more dynamic. The new Pathfinding system is 4 times more accurate than previous one, we had to go through a lot of challenges to introduce this system in a short period of time and keep relatively that same performance. We hope you'll love it!

We also thought that it would be cool to allow the player to place the buildings more precisely on the map. Therefore, we added a grid around each building that allows the player to see the boundaries of the building. We're also starting reserve space around the buildings for future Dynamic Road Formations.

On top of that we made a lot of changes to the balance of our game. We re-balanced a lot of different aspects in our game in order to provide a pleasant experience for you guys. Mating system was changed multiple times, nuggets effects & perks were revisited and rewritten in order to provide a better representation of the nuggets stat changes. Happiness effect got its separate love. Happiness now will depend on many different factors and actions, so you should be careful of what you are doing.

In addition to all the bug fixes / AI improvements and balance, we also added some pets to Mother Planet! Foxes & Mammoths are ready to join us today! 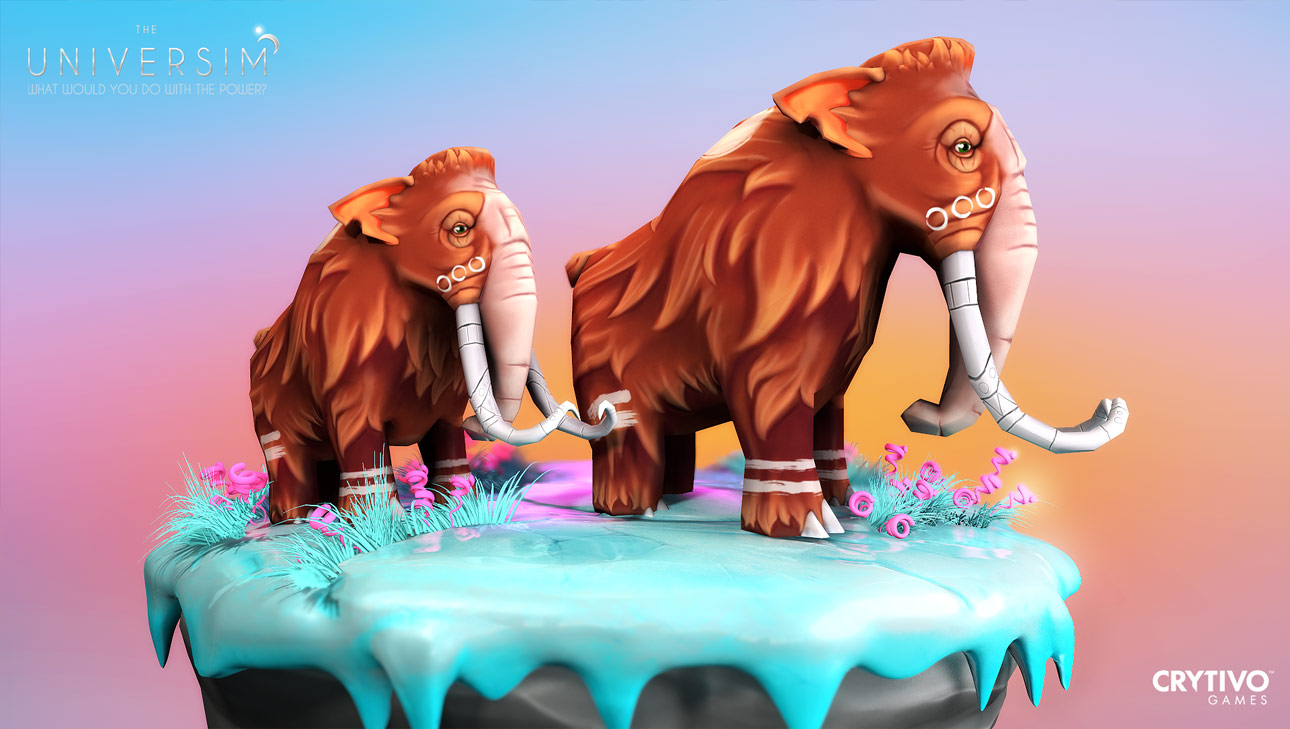 We revisited a lot of perks and their stats in order to improve the balance of the game. This helped us not only improve the balance, but also fixsome bugs that were causing the players experience issues with the food or did not apply any effect at all due to a very minor increase. Before we also had some perks applying effects to some stats in percentage value and hard value which caused some issues with the balance. We also decide to redo the percentage value on some perks and make them “hard” values in order to simplify the system and improve the balance. This change allowed us to control the nuggets stat growth more precisely and make sure that our perk system doesn’t break the game. The changes are:

After multiple responses on the new mating system, we decided to change it more and allow players to slowly but surely progress forward. The new mating system will provide the player with a slow but a constant grow. Surely with some usage of the God Power everything can go horrible wrong... oh.. you are all Gods... Gods don't do any mistakes, so nevermind. New mating system will provide the player with a good amount of nuggets in order to fulfill all positions in the buildings and have enough available nuggets to build those buildings. The issue with the dying civilization is solved as well, so you can finally enjoy your growing civilization endlessly until you kill all your nuggets yourself.

Time for the tornado & hurricane was changed in order to accommodate changes that were made to the Perk order. Players should have enough time to build the forecast tower & a bunker in order to protect their nuggets from complete destruction and death.

We know you've been having issues with Gravedigger not being super productive, so we refactored cemetery completely. Before, Gravegiggerwas not able to keep up with all the madness you had in your village. Dead Nugget bodies were lying all over the place, infecting healthy Nuggets because of his laziness. Now, let us introduce introduce stronger, more productive and scarier than before Gravedigger TWO POINT OH. Now Gravedigger can collect multiple bodies at the same time, he moves faster and knows better what body should be collected first to keep your village nice and shiny. Cemetery Building by itself been redesigned dramatically. It was merged with Pyre! Gravedigger now will become a Pyre Manager! Yes, you got it right! He has been promoted as well. Graveyard has more space for the dead souls. Last but not least, Gravedigger will be able to reuse old grave spots, if nobody was visiting dead Nugget for a long time his spot will become vacant for a new "tourists". 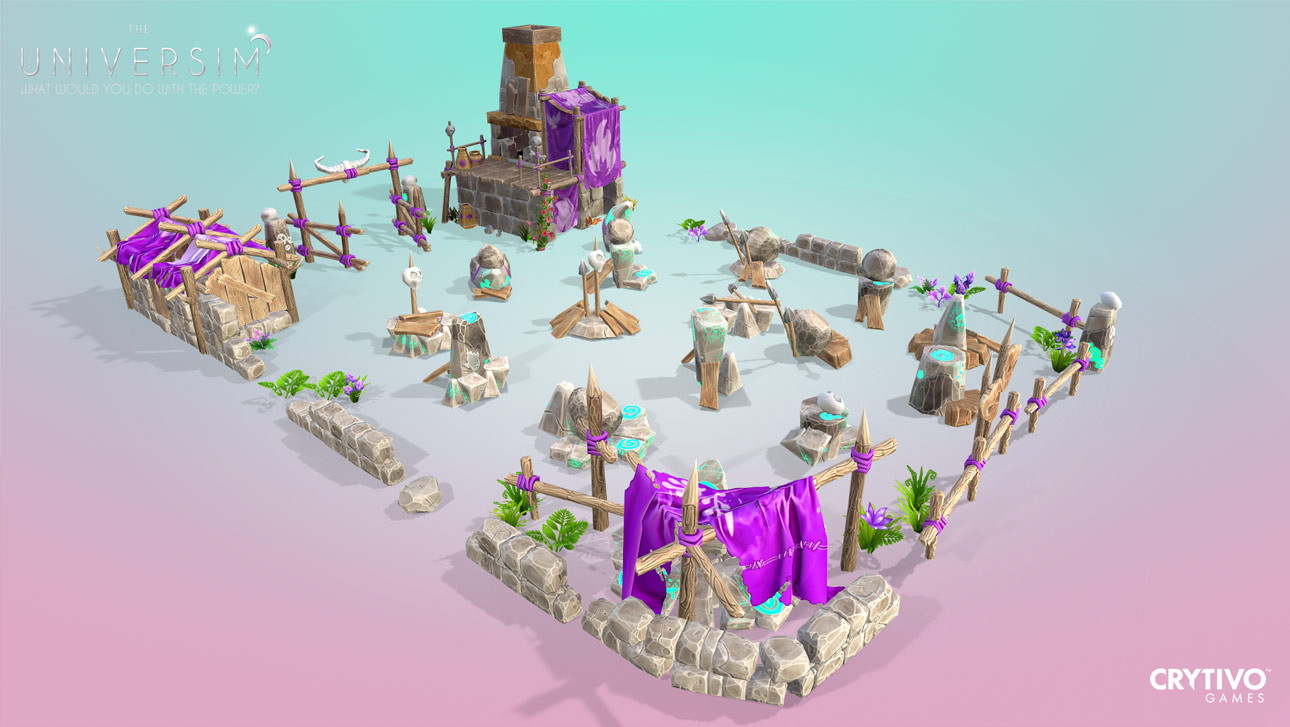 In this patch we also introduced tooltips in order to help players to track Nuggets stat changes. Now each learned perk will show up on the Nugget panel and provide the data to the player about the effects that are applied to the nuggets. All the perks got a new perk description & a specific description for the tooltip feature. 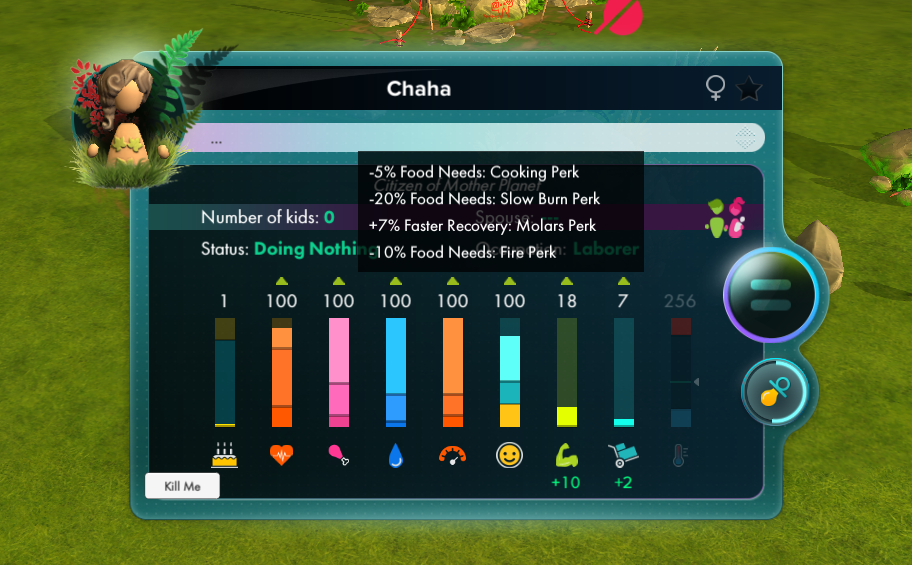 Nuggets now are getting influenced by many different factors that are happening around them. If you will treat your nugget with food & water, he will be satisfied with your kindness, but if you decide to break Nugget heart by taking his spouse away or abuse them, they will eventually try to commit suicide. So be extremely careful with the actions that you perform on your nuggets! Nuggets will gain or lose their happiness due to the next action:

Please keep in mind, even though we did a tremendous job improving the overall AI Stability and Performance you still might come across some issues and bugs. Please report them to on our Forums and Discord

P.s: We also would like to say thank you to:

For their contribution and active participation during this patch test & community mission. They all will receive Free T-Shirt with our game logo. Please send PM to Sasha or AlexK for the instructions on how to receive your T-Shirts.
Everyone else, who also participated during patch test & community mission, we would like to say thank you for helping us to improve the game. Your active participation will be noticed and awarded. Participate, respect each other and let your imagination go wild during those missions and test. Thank you all for sticking with us on this crazy ride! We hope you love all of the new additions, and we have plenty more in store for you. Stay tuned, stay in contact, and stay awesome! Don't forget to leave your comments below.

All our love, The Crytivo Crew