Instead of a news post I thought I would do a feature on the history of one of the more technically challenging ships to get in-game, the Prometheus class multi-vector assault cruiser.

The first part of this feature about the Prometheus is an article that I found on the Starship Datalink website, it's fascinating to see what the artists were thinking when a starship was designed!

The second part of the feature will be showcasing how the Prometheus will be appearing in the Continuum mod!

The USS Prometheus NX-74913 was supposed to represent the state of the art in Starfleet design. and, because of its multi-vector assault mode, it had to split into three different ships, all of which had to look suitably 'cool.'

In the first four years that the USS Voyager NCC-74656 was occupied with escaping from Kazon warships, making hyperspatial jumps, and playing cat-and-mouse with the Borg, Starfleet Command was equally busy developing an experimental starship with some very special capabilities. The USS Prometheus NX-74913 was created for the Star Trek Voyager episode 'Message in a Bottle,' in which the Doctor's holomatrix was transmitted tens of thousands of light years (via an alien com relay) in an attempt to send word about Voyager's plight.

The Doctor was deposited aboard the new ship, which we discovered could separate into many autonomous pieces in a swarming tactic - multi-vector assault mode. The script originally called for Prometheus to divide into five parts, and the first doodles and computer shape sketches attempted to fit them all together (and take them apart) with the requirement that the ship look good in both conditions, something that for various reasons was not totally realized with the USS Enterprise NCC-1701-D's battle section. After some early trials with the standard saucer and nacelle parts, I settled on a more streamlined style as an evolution of Voyager's lengthened nose and wing-like pylons.

The aft body that is normally the engineering hull in a starship could be split easily in two horizontally, each section sporting two warp nacelles. In the sketches they would be called (strangely enough) Upper Warp Hull (UWH) and Lower Warp Hull (LWH). This immediately required Prometheus to have two separate warp cores, and more likely five matter-antimatter reactors if all parts had to do combat at warp. We knew that even small shuttle craft have warp engines, so the small attack ships would be no problem, but could small groups of coils drive the big forward hull? Would they need to be hidden to fool the bad guys? Doodles and computer sketches continued and discussions began with Foundation Imaging, as they would do the final CGI model and animation. One of the first 'close' blue-pencil drawings presented a dart-shaped main hull with slight winglets, plus upper and lower embedded attack craft. Many of the usual Starfleet details were penciled in; impulse engines, phasers, nav deflector, RCS thrusters, tractor beam emitters, and so on. I kept a list of these handy, so -theoretically nothing was left off.

It slowly dawned on me that everyone of the five ships would need most of the same parts, which would make for a very complicated vehicle. Fortunately, we all got a reprieve when the producers reduced the number of ships to three, citing the possibility that a swarm of five might be a bit unwieldy and not look right on screen. Sketching resumed, primarily on the main hull, to remove the two little attack darts and add a pair of warp nacelles. A Voyager-style shuttle bay door gave way to an USS Enterprise NCC-1701 (Refit) set of fan doors. A comparison chart was developed to show the relationship between Prometheus and Voyager, not that the two would ever appear in the same shot, but to help the producers visualise the ship and establish scale for the paint scheme, windows, and other plant-on parts. Prometheus would come in at roughly 414 meters (1,360 feet) in length, compared to Voyager's 344 meters (1,130 feet).

The next round of drawings refined the major shapes, and included a starboard elevation cutaway, which we typically redrew in Adobe Illustrator to create the bridge engineering cutaway graphic. Prometheus worked out to 15 decks, and we populated the ship outline with lots of standard cut-and-paste elements like corridors, shuttlecraft, tanks, sensors, and turbolifts. Of course, many bits came in triplicate, like the computer cores. Outside, the nacelles and pylons were styled to reflect some of the look of the USS Enterprise NCC-1701-E, developed about the same time.

Unlike the Enterprise-E, the final pylons were swept forward, similar to today's sleek X-29 and Su-37 jet aircraft, then given plasma transfer conduits and shield grids. At one point the pylons were flat and fit together in a stacked configuration, but I decided to angle them again as in the computer sketches. Separating the nacelles gave the ship a bit more 'air' and the impulse exhaust a clear path backward!

Armed with orders to proceed from visual effects, I made a series of perspective drawings, including the familiar three-quarter front view, explaining all of the surface details of the combined ship. The phaser strips were given an updated look with tapered ends, the lifeboat hatches became elongated hexagons to imply a similar shape of lifeboat beneath, and the bridge dome got an armoured top. Thinner sensor strips and new pop-up photon torpedo launchers were added. The only area I wasn't completely sure of in three dimensions was the trailing surface of the main hull, where the impulse engines attached and where the warp hulls (with their own impulse vents) blended together with it. I had no doubt that Foundation would make it all work, since they were able to push and pull polygons about to make just the right shapes. Similar curve-blending questions in the same areas were solved by Tony Meininger on the Voyager miniature and by ILM on the Enterprise-E, where hands-on sculpting revealed all.

Eventually all of the exposed surfaces of the separated ships were drawn up for the CGI modellers, taking into account shield grids, passageways with seal-able connectors, bridge modules, and docking clamps. In the split warp hull, a unique shared warp core could be divided and sealed off for the multi-vector mode, giving each half its own core - only the upper half had the shuttlebay, however. The main hull was equipped with an enlarged deck 1 containing the bridge, two lifeboats, and a housing for one of two mini-warp nacelles. Visual effects wanted to see some articulation, so those nacelles extended out on swing arms. The arms also contained the plasma conduits from a warp core somewhere deep in the hull. The dorsal nacelle extended up from its housing; the ventral one dropped down into the space previously occupied by the LWH and the UWH. With the 'engineering' of the last parts now worked out, I could relax and call the design finished.

Foundation Imaging regulars Mojo and Brandon MacDougall were provided with the sketches and orthographic views necessary to build the CG version of the ship, with occasional notes and clarifications traded by fax. Detail colour swatches were pretty much standard Starfleet for the period, though the hull was spec'ed as a lighter blue-gray than Voyager.

As Prometheus was experimental, the NX-59650 registration number was added, down from a possible 74913, perhaps to say that the development project had been in place quite some time before Voyager NCC-74656.

Start to finish, this was one of the fastest-looking ships in Starfleet, one of the most fun to design, and,
maybe one day, we might just learn if her class went into service in the 24th century.

In the Star Trek: Continuum mod the Prometheus class did go into service in the 24th century and will be a late game ship for the Federation TNG faction that will require a special research item to unlock (yes, the research item is Multi Vector Assault Mode). 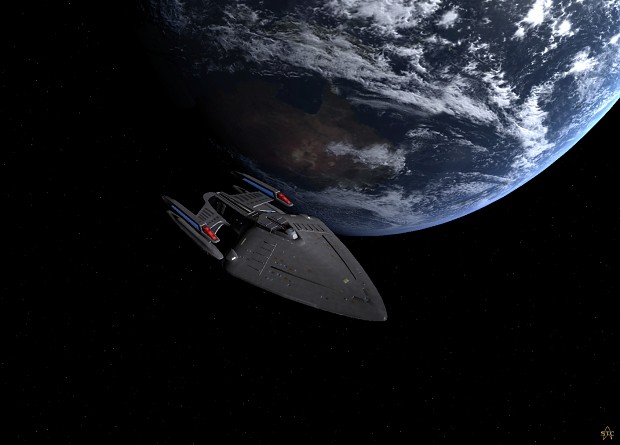 She will come equipped with phasers and quantum torpedoes and while at 414 metres long she's not going to be the biggest ship in your fleet she will be one of the most versatile due to being able to split into 3 fully armed and capable warships when the need arises. 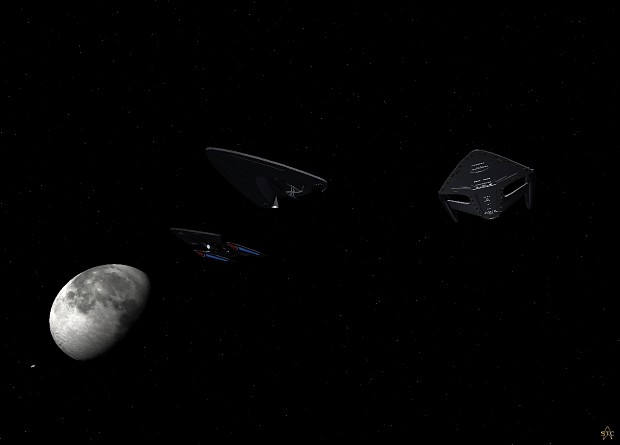 The Prometheus class' Multi Vector Assault Mode presented a significant challenge to Stargazer as the code required was subtly different to that used with the Galaxy class' saucer separation, the addition of a third player into the equation meant re-writing many things. If the Prometheus had had 5 sections as originally scripted then I'm sure that Stargazer would have been missing some chunks of hair right now!

Visualising how the ship will perform in-game with this separation is difficult from only a couple of screenshots, so I have taken a minute or two to record how the MVAM looks in game right now.

Please ignore the incomplete ship icons (they all say CLASSIFIED for a reason!) and the giant battle in the background!


Thank you for reading and we hope you enjoyed this feature!

that is awesome work, really impressive

wow i was amazed that it was able to recombine many games just leave it apart but wow. great work

my pants seem to be a little moist after that vid

this game is free?

The game, Homeworld 2, is not free, but our mod is of course free ;o)

lol, I thought it was a game :P

Too cool to be reality within HW2 engine.

I hope you all saw the little nacelles of the alpha section deploy and retract ;-)

...which Nathan animated so nicely.

A bold Starfleet design, for sure !

But I think that a splittable warp core is something very dangerous to do... I would have designed a three warp core ship with the UWH warp core as the default engineering room for the integrated ship, a smaller one for the LWH alligned just behind (speaking from the side view) the one of the UWH, and of course a mini warp core like a Defiant class engineering for the main hull.
The only hatches in the warp network would be in the plasma conduits with shunts to switch the plasmic feed of the lower warp nacelles from Main Engineering to Lower Engineering, but I think that would require a plasma purge of the conduit section from the shunts to the nacelles just to be sure of the phase variance of the plasma is the same on the totality of the conduit, the unmatching frequency in plasma phase could result in a catastrophic failure evenmore when the ship splits at warp speeds...

Perhaps a double plasma feeding network would be better and purging the nacelles only wold be faster, unless the UWH nacelles only could provide a warp field when the ship is integrated until the small warp cores take over at the end of the auto-separation sequence, requiring warp fields phase alignments...

That was just a trekkie technobable thinking, viedogame vise, adding the prometheus in that Mod was a wonderful idea since it is an awesome ship ! The type of ship I put myself in a nove crossover between Star Trek and Homeworld 2, so it is for me a dear dream come true !