A summary of what I've been up to and what's planned!

I have been busy these last few days improving Island War and OFDR, fixing bugs and game related issues and just polishing everything off! Here is a list of changes so far :

Vehicles
All vehicles have been completely reconfigured using my experience with Dirt Rally. This includes engines, weight, balance, grip, torque and gears on Jeeps, Tanks, APC's and Multi-Wheel!

All vehicle weapon positions have also had a serious overhaul. While I still have not figured out how to make it so can can NOT aim, I have made the best of aiming!

Ive made some slight adjustments to the exterior camera to help with visibility, and a special landing mode for the helicopters to help with choosing a clear landing spot!

Finally a few more vehicle variations are available. The Desert Patrol Vehicle and Fast Attack Vehicle now have a Auto-Grenade / medium MG combination, and the Humvee and BJS22 come in light and medium MG variations.

Weapon Handling Characteristics
I have overhauled all the weapon entities within the game to streamline them and make them consistent between variations.
Before, each weapon (such as the M4A1) existed once for each variation (such as M4A1a, M4A1m, M4A1CQB etc), each with their own complete weapon setup.
Now each base weapon (such as the M4A1 or the QBZ95) is configured once, with each variation a "child" of that base weapon. This ensures all the variations on a weapon have the same statistics, with variations only coming in weight, special features (such as scope, silencer, torch) and for silencers, round velocity.
These changes are directly inherited by the AI, and as a result their weapon fire is alot more realistic, with less laser shots from MG's and other silliness!
The SMAW, the QueenBee, and the AA Launchers no longer require you to load them when you pull them out. They are "preloaded" (like you see on their backs) and only need reloading (this goes for the AI too!). Note the Javelin is not included as its literally in 2 pieces

Weapon Recoil has been fixed (finally) so that proper weapon spreads are echeived when firing, instead of the vertical-only spread of the original game 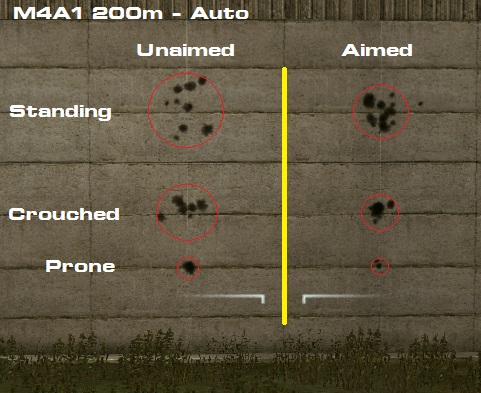 Note this image should say 100m

Island War Spawn Control
Huge update to the way in which units are spawned in and removed from the game. A new system to teleport far-off units into friendly locations (not too close and into buildings) instead of despawning them is now active, and the value of a location now plays a strong role in the choice of location.
All this means more enemy and allies in more locations as you explore Skira, even at the higher speeds of helicopters the teleport system will help ensure someone is there! (I still recommend going slower if you can, its more fun if you give them time to setup!)

What's Coming and When!

Now the weapons are streamlined and can be easily modified, they need a serious balancing to make them work and feel like the real thing. Bullet Penetration and armor effectiveness is also in the crosshairs.
Island War is running awesome, and itself needs serious balancing now its all functioning, as well as some features need to be made more robust and fleshed out.

Everything already complete, and the above in-progress will hopefully be done within the week, and then you and your friends will be able to mount up in a rally DPV and drift down the Putoran Mountain Pass while shooting at the PLA in the bunkers! (I am actually serious!!)