Experimentation, Iteration, and Boom Boom Pods. We know that a bunch of you have been eager to know more about the game, so we sat down recently with the developers to talk about how the game came about, the range of vehicles players will be able to build, and what EGX Rezzed attendees can expect from the playable build that'll be at the show.

We're enormously excited about Keebles. The second game to come from the Green Man Loaded
label, Burnt Fuse's inventive, vehicle-building puzzler is shaping up very nicely indeed, and will be playable on the show floor at EGX Rezzed!

We know that a bunch of you have been eager to know more about the game, so we sat down recently with the developers to talk about how the game came about, the range of vehicles players will be able to build, and what EGX Rezzed attendees can expect from the playable build that'll be at the show.

Could you give us the brief elevator pitch for Keebles?

You’ll need a combination of great building skills and quick reflexes, and it’ll often take quite a bit of skill to control the vehicles you design. Using beams, various wheels, and gadgets you find on Keeble Island you’ll have to navigate all sorts of challenging terrain to save the Keebles.

The backstory is that the Keebles' beloved mushrooms are disappearing. Save as many Keebles as you can while making your way across the treacherous Island to the Whale at the End of the World, who’ll take them on to new lands. 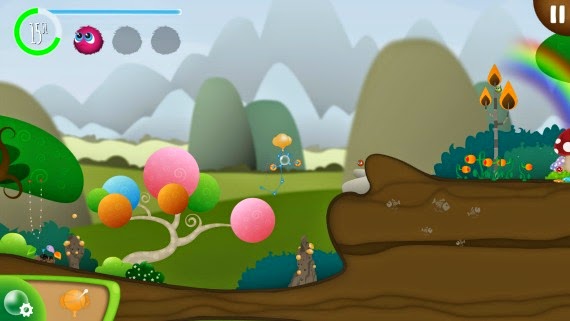 What's the story behind Keebles? Where did the idea come from?

We were actually doing research on evolution themed games to see if we could come up with some game concepts when we came across www.boxcar2d.com, Computational Intelligence Car Evolution Using Box2D physics (say that 10 times quickly!). In BoxCar2D, an evolutionary algorithm iteratively generates vehicles to successfully navigate a given terrain. We found ourselves leaving the algorithm running in the background and watching it evolve generations of vehicles to try and improve itself, and started ondering if there was a way we could actually make something like this into a fun game.

Having been fans of physics-based building puzzle games (World of Goo, The Incredible Machine, Bridge Builder), we spent a lot time iterating ideas and eventually we had what was the basis of Keebles as you see it today.

The original concept we came up with was quite different from the final version of Keebles. Much like the vehicles you build in Keebles, Keebles itself evolved iteratively as we fine-tuned it for playability. The Bobble and Keebles didn’t exist in the early concepts, we had a range of engines that were the core of the vehicle instead that provided power. The puffer, which is now one of our favourite gadgets and something we can’t imagine the game without, was a very late addition but really opened up a whole
lot of new gameplay. 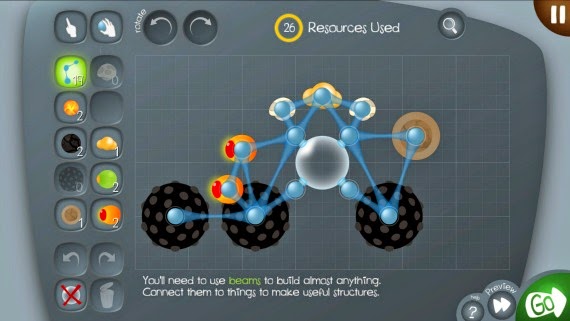 Tell us a little bit about the creation tools. What sort of vehicles can you make in
Keebles and how does the Workshop operate?

The Workshop is where players will spend most of their time in game, so we put a lot of work into it
to make sure that it worked well. You essentially get a grid to build a 2-dimensional vehicle using beams as well as wheels, rockets, balloons, parachutes etc.

The number of items you get is limited, and varies depending on the level. This is because the Keebles can only use the resources available to them as they travel across the island. Working out what to give
players on each level was a critical part of the tuning that we went through to get the game balance just right.

A little tidbit we don’t explicitly point out in the game, but the more attentive players will note, is that all the beams, wheels and gadgets are derived from the various flora on the island. For example, the beams and wheels come from the Herbus ambulans plant (AKA the rollifern) and the rockets come from the Displodo vastus. You can find a little more information on this via the Steam Trading Cards.

What sort of challenges can players expect to face across the 30 levels in Keebles?

Keeble Island may look sweet and inviting but don’t be fooled. Saving all the Keebles can leave you a soggy, crying mess huddled up in the corner.

The way we designed Keebles means that the challenges come in two parts, because you not only have to design a vehicle that works but you also have to control it. It’s this combination of fiddling with the design to get a vehicle that suits your play style that creates a great iterative cycle, and it’s lots of
fun.

One of the selling points has been that there are multiple solutions for each level. How important is that for a game about experimenting with design such as this, and how did that factor into level design and creating the Workshop toolset?

A game like Keebles that’s all about building things needs to make sure that players can express themselves, and encourage their creativity.

Because every player is different, players are likely to approach each level in unique ways. Even if you took someone else’s vehicle design, you’re likely to end up it playing the vehicle quite differently with
different results. We spent a lot of time balancing the levels to reward varied and interesting solutions.

A big a part of the gameplay is creating that feeling that if you just tweaked your vehicle like ‘this’, or moved this bit over ‘here’, then you’d get a better result. Because of this, Keebles is almost all about experimentation and iteration. Sometimes the designs that don’t work are almost more fun than the ones that do, and some of the failures can be pretty spectacular.

We knew that players would be moving back and forth between the Workshop and the level a lot, so we
put lots of effort into making sure that was quick and felt right. We also put in a dedicated Restart button for really quick retries. 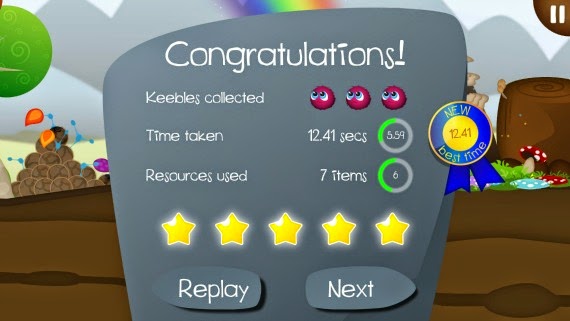 Replayability is a big part of this game. Could you tell us how you've gone about giving
players reasons to keep coming back?

Well, firstly getting all five stars on every level isn’t easy – some of the solutions that players are going
to need to come up with will require some very out-of-the-box thinking. Sometimes it’ll be skills you develop later in the game that’ll give you ideas for getting better scores on earlier levels, so you have an idea for one level and think ‘hey, that might just help me out on this other level’.

Every level also has a separate Time Challenge, and the solutions for these are very different from the five star solutions since you don’t have to worry about saving the Keebles, just getting to the end as fast as possible. This has encouraged some pretty crazy ideas. Some of them have even worked!

We’ve also put a lot of Steam achievements into the game, a few of which are easy to get and the rest of them aren’t. Some of the achievements are specifically there to get you thinking in a particular direction, or to reward you for trying out an unconventional approach. For example, there’s an achievement for completing one of the levels with no wheels.

We’ve been developing this game for over a year now, and we still keep coming across different solutions to levels. At PAX Aus 2014 in Melbourne we saw some great ideas, and we’re sure that people
are going to keep on surprising us with clever designs.

An essential part of Keebles’ replayability is the feeling that you could always have done just a little bit better, and the core of this is the interaction between the way you design your vehicle and the way you control it.

While play testing the game prior to its beta release, Felix (who already knows all the solutions to each level) has clocked up over 100 hours in getting all Keebles, 5 stars for every level, every time challenge and 62% of the Steam achievements. He is also very proud that he discovered a few new vehicle designs
along the way. 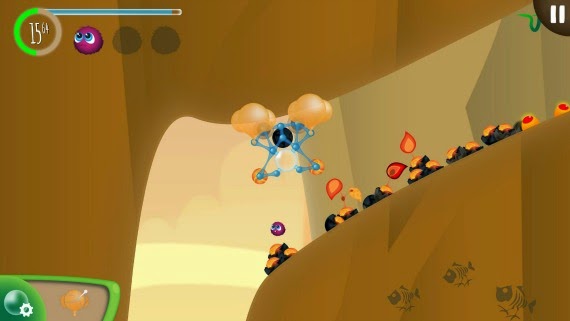 What can Rezzed attendees expect from Keebles at the show?

We think attendees are going to find Keebles to be a unique experience that gets under your skin. It looks sweet and charming but don’t let that fool you – there’s a great depth of gameplay and a level of challenge that might reduce the most hardened constitution to tears. It’ll test your mind and your reflexes, so be sure to bring both!

The build of Keebles on show at Rezzed will have all the levels in the game unlocked, so you can get a sense of what the whole game offers. If you want to get a taste of Level 29 “Loop de loop de loop” without putting in all the hours it takes to get there, go check Keebles out at Rezzed!

We’re really excited to share Keebles with everyone at Rezzed and we hope they’ll love playing it as much as we’ve loved making it.

What's your favourite, most awesome, badass, excellent thing about Keebles?

Rockets… definitely the rockets. We call them Boom Boom Pods derived from the ripe fruit of the Displodo vastus plant found on Keeble Island. Stick 4 on the back of your vehicle, press fire and take a selfie of your devilish, maniacal grin.

A close second is the Bobble smashing into smithereens, which is hilarious. We never get tired of seeing the bits fly everywhere. This often follows immediately after sticking the 4 rockets on the back of your vehicle. Feel free to add your own sound effects :)

------------------
Thanks enormously to Burnt Fuse for chatting to us. Keebles will be playable on the show floor at EGX Rezzed, and remember that every EGX Rezzed ticket holder will be eligible for a trio of free games from Size Five Games. You can find out more regarding our EGX Rezzed Free Games Giveaway here.

If you folks have any questions to put to the team, if there's more you'd like to know, hit us up in the comments and let us know what you're excited for.