How did it all begin? Where is it going? Well, its something like this... 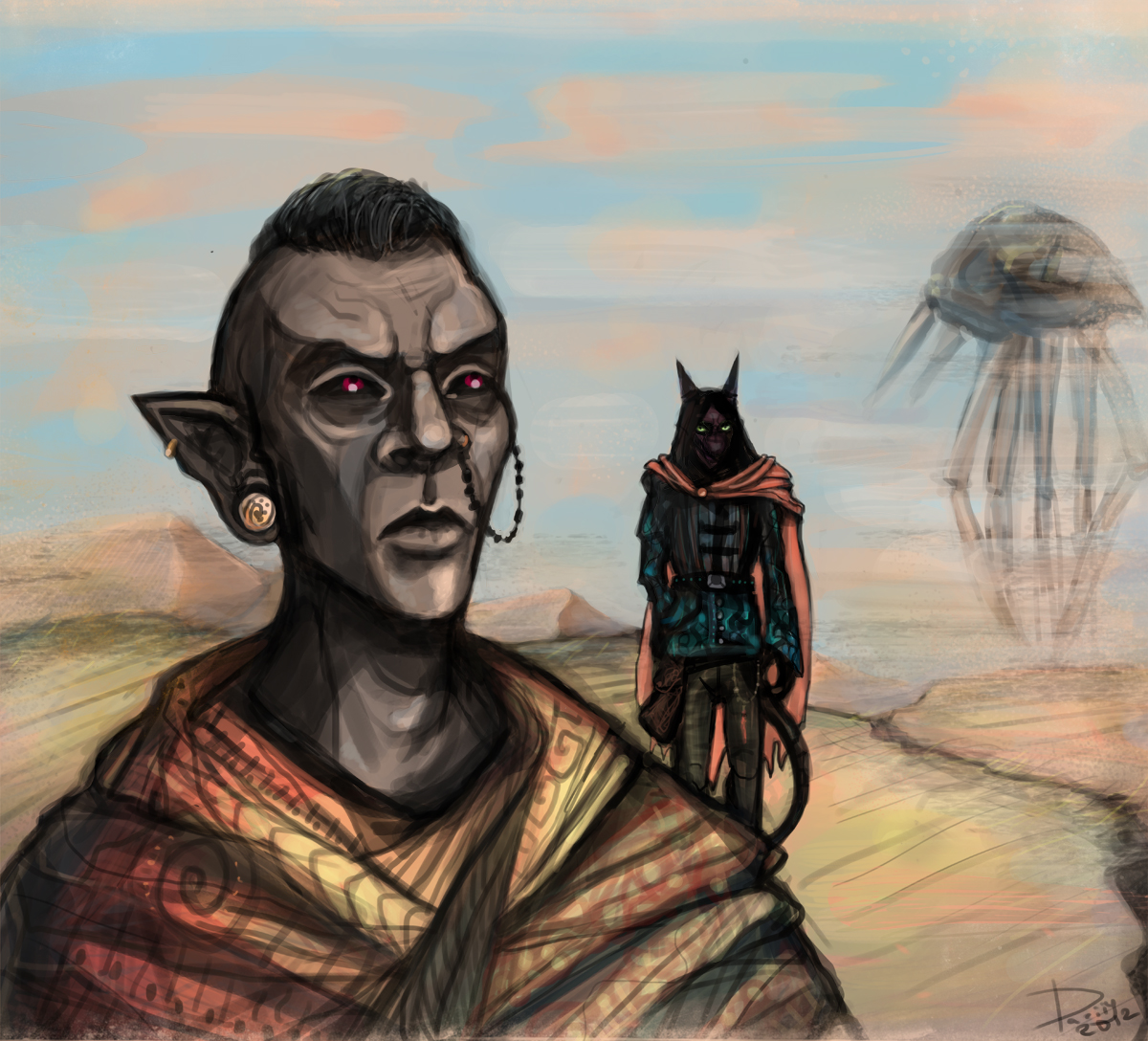 The dialogue in Morrowind used to frustrate me, I would play though the game, hoping for something different from each NPC, some sign of personality, and a few had one. The guild master in Ald'ruhn's fighters guild, Caius, and of course all the others like Jobasha, and Divith Fyr. And I realised how much more rewarding it was to converse with these characters than the generic ones in the game, just there for sword fodder or eye candy.

I downloaded a mod called Less Generic NPC Project: Seyda Neen. I played the game and immedietly fell in love with the concept. The NPCs had a personality, they made jokes, had feelings and were interesting. The improvement was infinate. I began searching for the rest of these mods, after all the word project implies that it is an ongoing thing. But it wasn't.

I was so dissapointed I decided that if there was nothing out there that made these changes, then I would have to make them myself (a foolhardy and in fact idiotic notion, as you will see). I took one look at the construction set and wanted to give up right there, but with help from a few friends we taught outselves about dialogue, and the no lore feature (which we don't even use anymore, but at the time we would remove the generic topics first, now we simply put our dialogue over the top). Suddenly we could do it. Blake and myself spent one long coffee fueled night talking on MSN, writing NPCs and putting them in the game for the town of Ald Velothi.

Whenever I visit Ald Velothi in the game I cringe. The NPCs come out with one line replies, scarely any better than the originals. None the less, the team grew, Khuul was next. Khuul was a big hit. Several more writers, and several more tilts on the NPCs, and the standard flew up.

In Khuul I even designed a very simple quest rewarding the player with a ring for enchanting. Maar Gan was the really turning point. After I'd written a seer for Maar Gan (still my personal best work I feel), I wrote a healer, but did not know how to script her, and so I asked on the official forums for an able scripter to help out with a few odds and ends. The reply we got was a thousand times better.

Max AKA Nobody is one of the most talented scripters for Morrowind, and he single handedly created the incredible Complete Morrowind mods. In addition he didn't just script the odd quest for us, he wrote NPCs, cleaned the mods, and actively encouraged others to include quests in thier dialogue. Maar Gan shipped with about 6 quests. Ald'Ruhn had more than 40. Tel Mora, Pelagiad and the Vivec Foreign Quarter also have an impressive amount. Mebestian Ence, and Bolvyn Venim both have extensive strings of quests, and are both superbly written.

After Ald'ruhn was complete health problems forced me to take a back seat from the project for a time, and it was going so well that I almost felt that there was little point in my stepping back in to quickly. But Max had other demands, and I was still enjoying the lack of stress connected with non running a project such as LGNPC (which now has an excellent reputation for reliablity and quality). The project was orphaned, and we sadly announced that the plans to go ahead with the Vivec Foreign Quarter were on hold, and that Tel Mora might be the final installment.

I am full of admiration for the way Cyrano took on the project and kept it alive. From fixing the bugs in Tel Mora, to running the Vivec FQ installment, to finally coaxing me out of 'retirement' and bringing LGNPC here, its new home. He is the one who had the idea for this forum, he made the enquiries. It is because of him that the project is still a project, and not an abandoned dream.

So thats it for the past and present of LGNPC. What about the future?

Well, Oblivion is coming, we all know that. I know for a fact that my computer will run Oblivion about as smoothly as an Ice-breaker would move through the Sahara Desert. I intend to buy the game, and to play it and enjoy it. But I doubt it will give me the same pleasure as Morrowind. And doubtless many feel the same. Morrowind has so many mods now that there are an infinate number of games you can play with it, and the longlivity of the project will not fade with the arrival of its younger brother.

Think of it like the sibling who feels displaced by a new arrival. Yes the baby looks sweet, and gets all the attention for a time, but is the first child (or third in this case) loved any less as a result? No.

The future for the LGNPC project is as bright as it was when it first started. In fact, its brighter than ever.

I love this mod but this post has been on their forums for 7 years. Any recent updates?