In this article you can read about Tacitus Prospectors, one of our Nod subfactions.

Like Protoss in StarCraft, they are technologically superadvanced Nod sub-faction, which places quality over quantity. They rely on their alien weaponry, which they improved to the level, where it is much more advanced even than it's Scrin cousins. Their most widely used weapons are based on plasma technology - from light and good against infantry pulse plasma cannons and plasma grenades to deadly plasma beams and heavy plasma cannons. Even their basic infantry has better training and equipment than in any factions or their sub-factions. When in the theme on infantry, until T3 and it's Plasma Assaulters they have no anti-tank infantry - they missle infantry is anti-air only. Also, their most valuable soldier - mysterious Operative Skyrn (only Kane and Brother Nikolai know who he really is) - a powerful hero equipped with mysterious but extremely precise Sharpshooter's Eye Rifle which seems to be a composition of plasma and Railgun technology and not less mysterious nanite armor (it is not exo-siut). When enemy infantry garrisons a civilian building, the Siege buggy comes into action and launches it's anti-personnel plasma grenades over long distances. They traded the useful unit - Stealth Tank - for sometimes even more useful Kangaroo antigravity APC, which can hold 2 infantry squads that can shoot from it. When the more advanced combat comes to reality, they have three choices: Raptor Warmech, Sunspear Artillery or Dragon Lance Tank. First is a quadpod mech armed with plasma beam and consisting of stealth unit detection and active camouflage (activated and deactivated by player, unit cannot move or shoot then, detectors must come twice closer to see it). Second is a heavy-duty plasma artillery, which has two firing modes: Plasma shot - a powerful plasma charge is lobbed onto enemy at long range, causing devastating splash effect; plasma beam - like raptor warmech, only improved range and firepower. It's slow and has only average armor, so should be protected. Third is a very versatile assault tank, the flag unit of Tacticus Prospectors. It's construction is similar to the Scorpion Tank, however it's twin heavy plasma cannons, which have powerful cooling systems, which let them overrun any heavy weapon with rate of fire (and firepower). This unit is basically faster than predator and can divert some power to engines to be even faster than normally (at the cost of firepower and rate of fire). It can also overcharge plasma cannons and fire burst of six rounds (each with normal firepower) to quickly finish off it's enemy but it renders them useless for a period of time. It's armor is extremely resistant against any energy weapon and weak against projectile and concussive munitions. They also created their own Prophet - Prophet of Armageddon - expensive, but powerful anti-infantry and anti-tank antigravity vehicle. It is sufficiently armored and armed with Phalanx particle cannons, which would normally be also effective against air units, but installing fast-responding turret mechanisms would be a little bit too expensive to produce normally. If they do not have ground superiority they can call in Banshee MK2A to clear everything with it's superheavy plasma cannon and dual SAM/AAM-163 Stingray missile launchers. However, when these arguments don't say a word to the enemy, they can release their prototype unit, which originally was intended to be improved Montauk, however an another concept was realised and Desert Wyrm - because it's the vehicle's name - has become a fear amongst all armies - it could travel subterranean and surface in the middle of enemy base. Next, it's three superheavy plasma beams made apocalypse amongst any forces inside and balanced buildings with the ground level. Desert Wyrm is Tacticus Prospectors Epic Unit and there can be only one on the battlefield (per player). That all makes that their units and buildings are expensive and take long time to build, but they are also more powerful and resistant to enemy weapons. 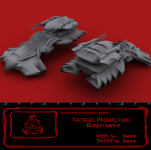 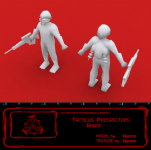