Post feature RSS New to Mafia? Here's what you should know

If you have bought Mafia (2002) either originally, or on Steam or GOG just for this mod, you may be unfamiliar to the way the game works. I've written this article for those who are new to Mafia to that they can enjoy this mod to the fullest.

Mafia is an old game. Originally released in 2002, it is still an absolute classic, but its gameplay has shown its age overtime. Many features that we as gamers now take for granted simply did not exist back then or were done quite differently to modern standards. With this guide, I'll hope to make it easier for people to setup their game and how to play it without missing a thing.

If you have bought the game on Steam or GOG, this should be easy since these are simply installed through the platform's installer. I am assuming that anyone in possession of the original CD's will know their way around using them. The vanilla (CD) version requires a CD to run though. You don't need to search for a crack since the mod will come with a custom executable that automatically removes the necessity to have the CD inserted.

How about other mods? Do I need the widescreen fix?

Nope. It is not only recommended, but actually required to use a totally clean version of Mafia. Even if you are using a widescreen monitor. The custom missions will have a wider field of view to accommodate the zoomed in effect that a widescreen causes. The installer of the Titanic Mod will replace all the necessary files for you in order to run it. After installation, it should run immediately without any other tampering required.

You'll be greeted by the setup screen, in which you can set your desired settings. Even to me, this screen is quite vague. Triple buffering? Multipass rendering? Truecolor? These are terms you'll rarely have to worry about nowadays. For your convenience, This is a screenshot of the settings that I use to run the game with: 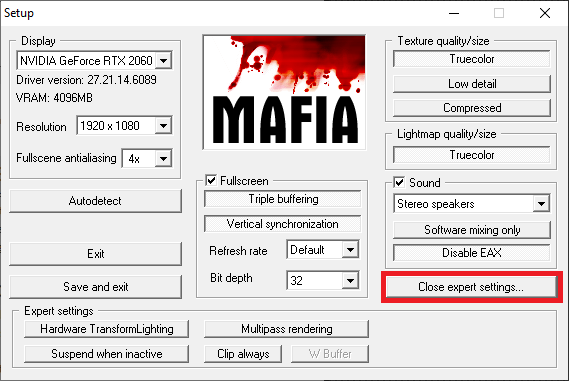 Highlighted in red, expands the expert settings. I've left all of those be. Of course, your mileage may vary if you find that a specific setting makes the game run better for you. For me at least, what you see here makes it run stable and consistent.

When you get past the logo's onto the profile creation screen, quit the game. If you already had the game installed and a profile made with a few missions played in it, you must create a new account after the mod has been installed. This is because the mod overwrites existing mission data and cause a hot mess in your savegame data. If you've created an account but hadn't done anything with it. No problem, you can leave it be.

When you've downloaded the installer for the Titanic Mod, make sure you do a right mouse click on it and run it as an administrator. Some PC's have more strict administration rights and prohibit the installer from overwriting any data during the installation process. Data that is very important to be installed.

If you've installed the mod, and the whole game looks like a big mess (or doesn't even boot at all anymore), then you must reinstall the Titanic Mod as an administrator.

Within the installer, you'll be asked to locate the game's game.exe. For Steam users, it is usually located in "...\Steam\SteamApps\common\Mafia\Mafia"
You'll actually find two game.exe's in both Mafia folders. It doesn't matter which one you pick for the installer.

For GOG users, the game is often installed in the folder "GOG Games" under Program Files.

Once the Titanic Mod's installer is done, congratulations! Welcome aboard!

So, after witnessing the tear jerking cinematic experience of the opening titles, you'll now find yourself in a completely different looking main menu. Even some items have been removed from it that bear no relation to the mod. Less is more, y'know.

This is a good moment to jump into the ingame options first. First, get yourself acquainted with the available controls the game offers. And make changes where necessary. For example, reloading is bound to L instead of R, and jumping is bound to Numpad 0 or E instead of that massive button in the middle of your keyboard.

Also, oddly enough, under the controls section, you'll find the "Other" tab, which has stuff that has nothing to do with controls such as changing miles per hour to kilometers per hour and subtitles. The latter, I'd highly recommend enabling, even if you are natively English spoken.

Under graphics, suffice to say, crank everything to the max. However, if you are experiencing game-breakingly low framerates at the docks and outside at sea, you may want to tone down the level of details slider as well as the draw distance.

Gotta love that punctual feeling when controlling Tommy right? None of that smooth RDR2 animation stuff. Just plain old non-transitional animation yeah. Contrary to modern games, the original Mafia is not a cover shooter. So if you get into a fight, you just gotta duck down and get out of the crosshairs, so make sure you have your crouch button setup.

Also, when Tommy stands near any item of interaction, a red circle with an exclamation mark will appear in the bottom left corner. This means that an action can be performed. This can be anything, from opening doors, to getting in cars, to doing any of the features included in the mod. By default, this is bound to the right mouse button.

Lastly, mission objectives can be displayed by pressing F1.

The most noticeable difference between Mafia and more contemporary titles including the Definitive Edition, is that weapons feel a bit different. They are less agile, do not have ironsights, and if you reload a clip with bullets still in them you'll lose those rounds. Also, throwing a molotov or grenade does not have a one button press to make Tommy flick the wrist and toss one over his shoulders. You need to select the throwable item in your inventory, and throw it via the left mouse button. Holding it increases your throwing distance. Tommy is definitely not a trained soldier, that's for sure.

If you have played the Definitive Edition, you are in for a treat. Although realistic, Mafia was often criticized for the slowness of its vehicles. They truly drive like old clunkers with a road grip comparable to a wet newspaper in a teflon pan. This may take some getting used to. I've deliberately kept the Renault Town Car faster than it originally was, since a car from the 1910's would be even slower than this mod's production.

One useful aid worth noting though is that if you press TAB while driving in the city, you'll get an overlay of the city map. On there you can see the blue X marking the location of Titanic when driving there in the mission. If you don't like using the map, some White Star Line billboards can be seen atop of buildings that point you into the right direction.

So, where's the ship?

The ship can be found on the Central Island docks, highlighted right here: 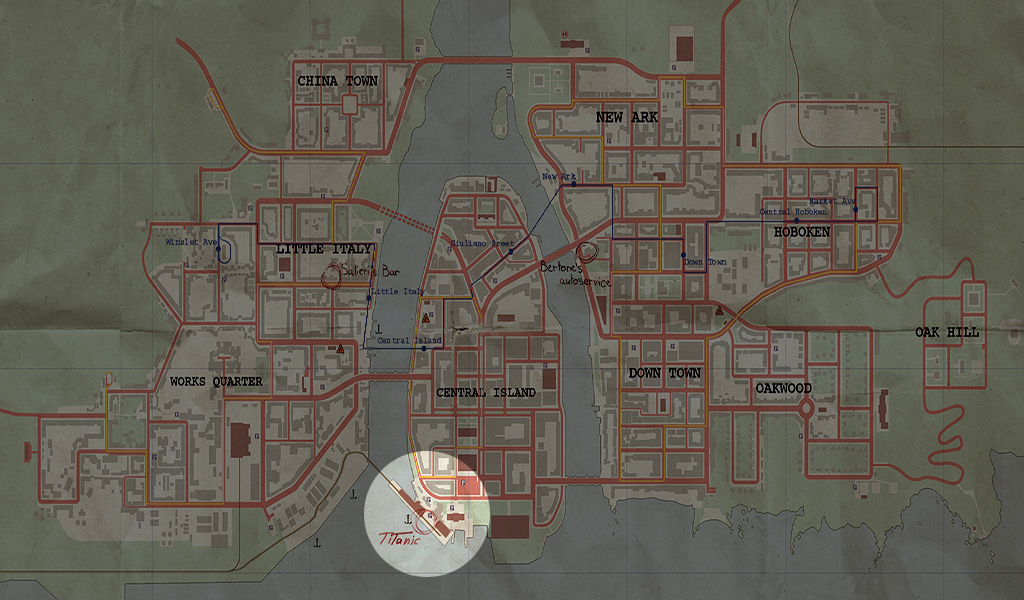 In the original game, and the opening sequence of the mod, you'll receive a game over when any members of Salieri's gang die. However, once you are onboard there are no consequences. Which comes in handy in case Paulie blocks your doorway.

It won't come as a surprise that the mod literally pushed Mafia's old LS3D engine to its limits. And these limits can sometimes come to light. For example, on occasion I have noticed some assets and NPC's being misplaced or not doing anything after the scene had reloaded from a game-over screen. Apparently, Mafia's save files are made with the intention to store data for about a few hundred objects and a small handful of NPC's. Not hundreds of NPC's and a boatload of stuff. If you encounter any oddities post death, try to reload the scene from the menu and it may be fixed again.

I hope this small guide gave a little bit of insight in how Mafia works. If you feel I missed any items or have been unclear to certain things, please let me know in the comments and I'll update this article accordingly.