"New Order covers the period of the Galactic Empire and Imperial Remnant, the timeline spans from the birth of the Galactic Empire in 19 BBY to Second Galactic Civil War in 40 ABY." - said in the summary to our mod. Until then, we have given a fairly general description of the timeline, and we now want to share more precise dates, and also talk about the system of eras changing.

The Empire is formed, but it hasn't yet acquired it's full power. Conflicts on distant fronts with Separatist remnants are still raging, and the new authority, led by the Emperor Palpatine, are engaged in exterminating the Jedi, as well as everyone helping them. Empire is still using forces, inherited from the Republic, but new technology is making it's way. The Rebellion is an organization consisting of local militias and resistance forces undermining the positions of the Empire and hiding the Jedi from the eyes of the Emperor and Darth Vader. 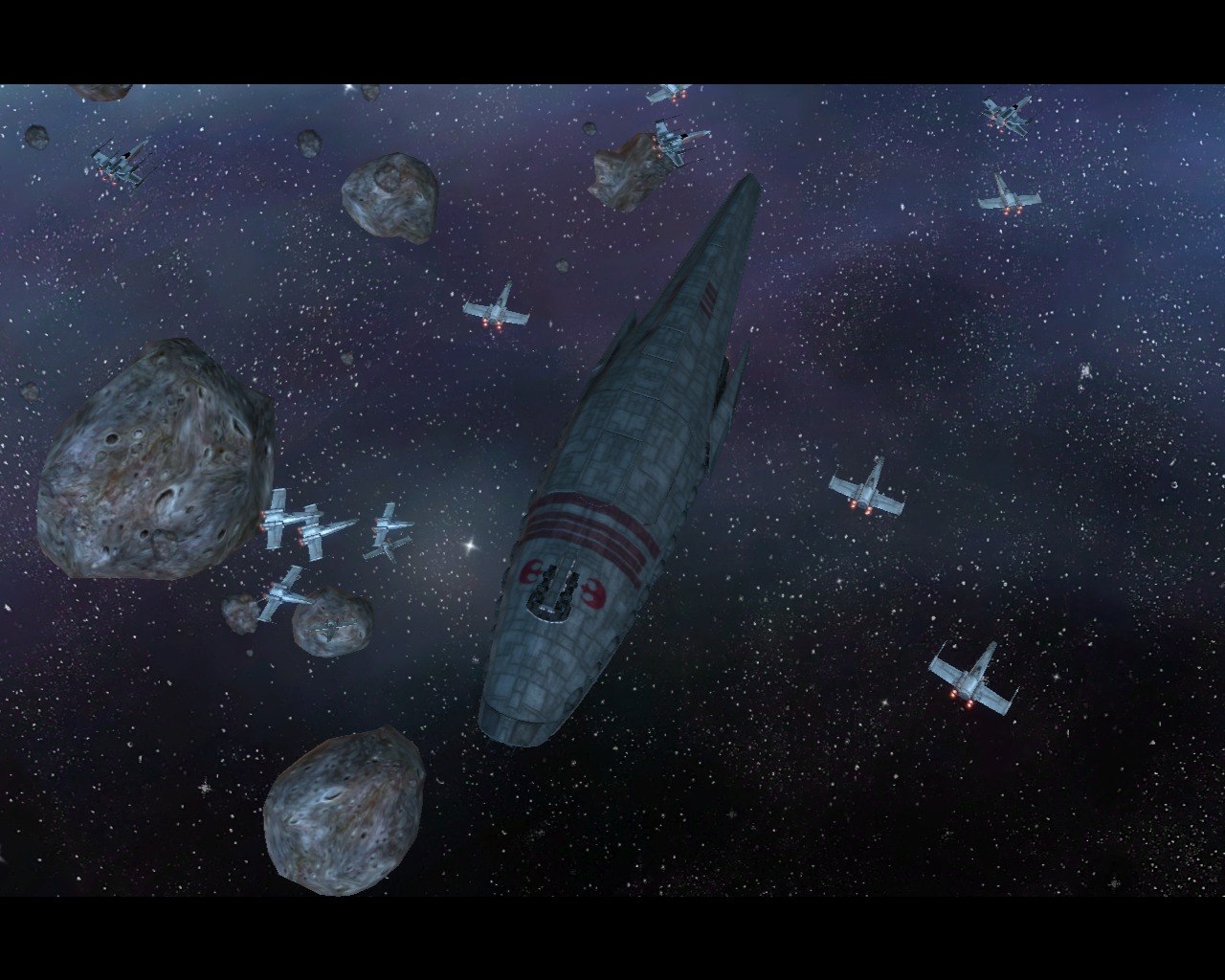 Bulwark mk I deploys squadrons of the Z-95 headhunters at the early years of rebel movements.

The Dark Times have come. Empire rules the Galaxy through the fear, it's immense forces imposing Emperor's will or crushing those who refuse it. Facing the growing leviathan, numerous resistance movements are organizing into single entity to become the Alliance. "Operation Strike Fear" scenario will take place at the end of this period. 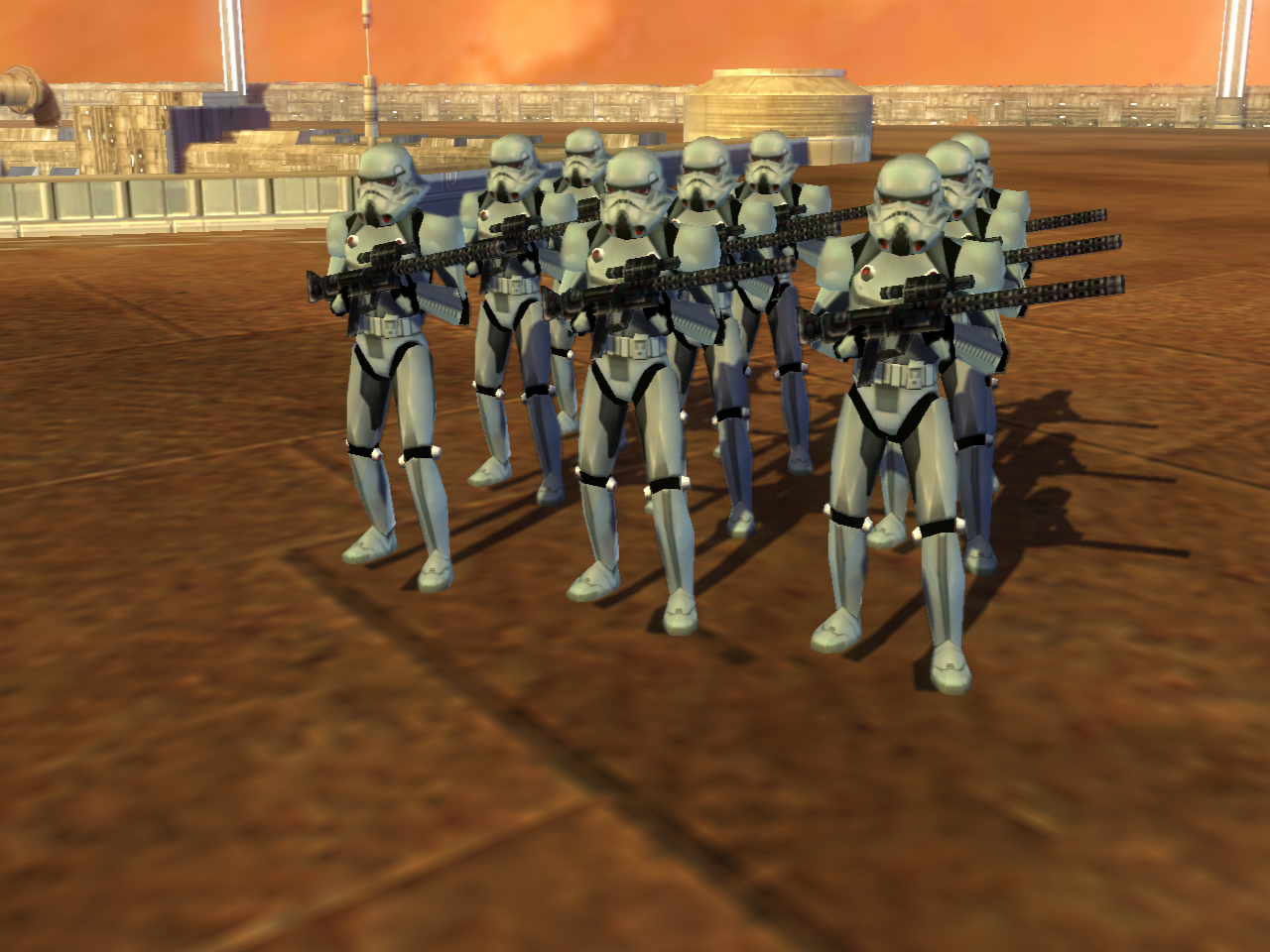 Darktroopers phase 0 are ready for combat at Bespin.

Rebel forces won a series of victories and now openly battle the forces of the Empire, gaining strength.
To compensate, the Empire is developing new weapons while trying to suppress the increasing number of worlds joining the Rebel cause. Striking from the nowhere and gaining resources, troops and materiel from sympathizers, the Alliance is preparing to make it's decisive move against the Empire. An assortment of rebel vehicles patrols the area on Yavin IV.

Emperor Palpatine and his right hand, Dart Vader, are dead, the Empire is in disorder and bears great losses. The Alliance, reorganized into the New Republic, captured the Coruscant and forced the Empire and warlords into Deep Core of Outer Rim. While the imperial leadership is demoralized, battles for the throne are fought, and the imperial officers and politicians alike announce their independence and battle between themselves and the remains of imperial authority.
In certain years of this period, the Empire is reorganized to figth the common foe under the leadership of Grand Admiral Thrawn and the reborn Emperor Palpatine. 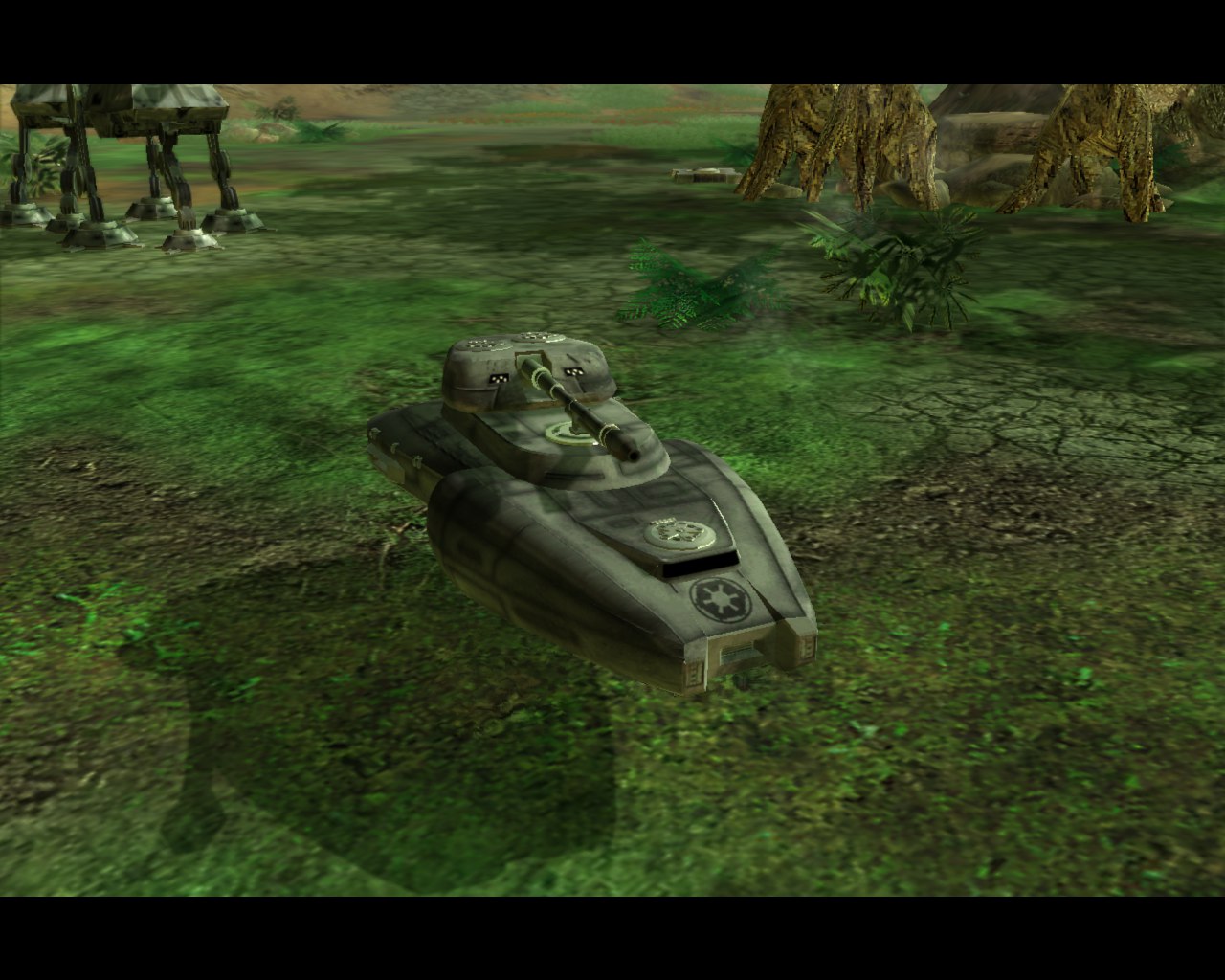 The Imperial Civil War is over: admiral Daala united struggling warlords forces, but is unable to inflict a major defeat to the Republic. Her cause is carried on by next imperial leader, Grand Admiral Pellaeon, who fights several campaigns, but Imperial Remnant still loses it's forces and worlds, which forced him to sign the peace treaty between the Empire and the New Republic. However, the peace in the galaxy does not last long, as new threat looms over the galaxy - the bloodthirsty Yuuzhan Vong, destroying everything in its path. The galaxy is united in every way to repel the uninvited guests. 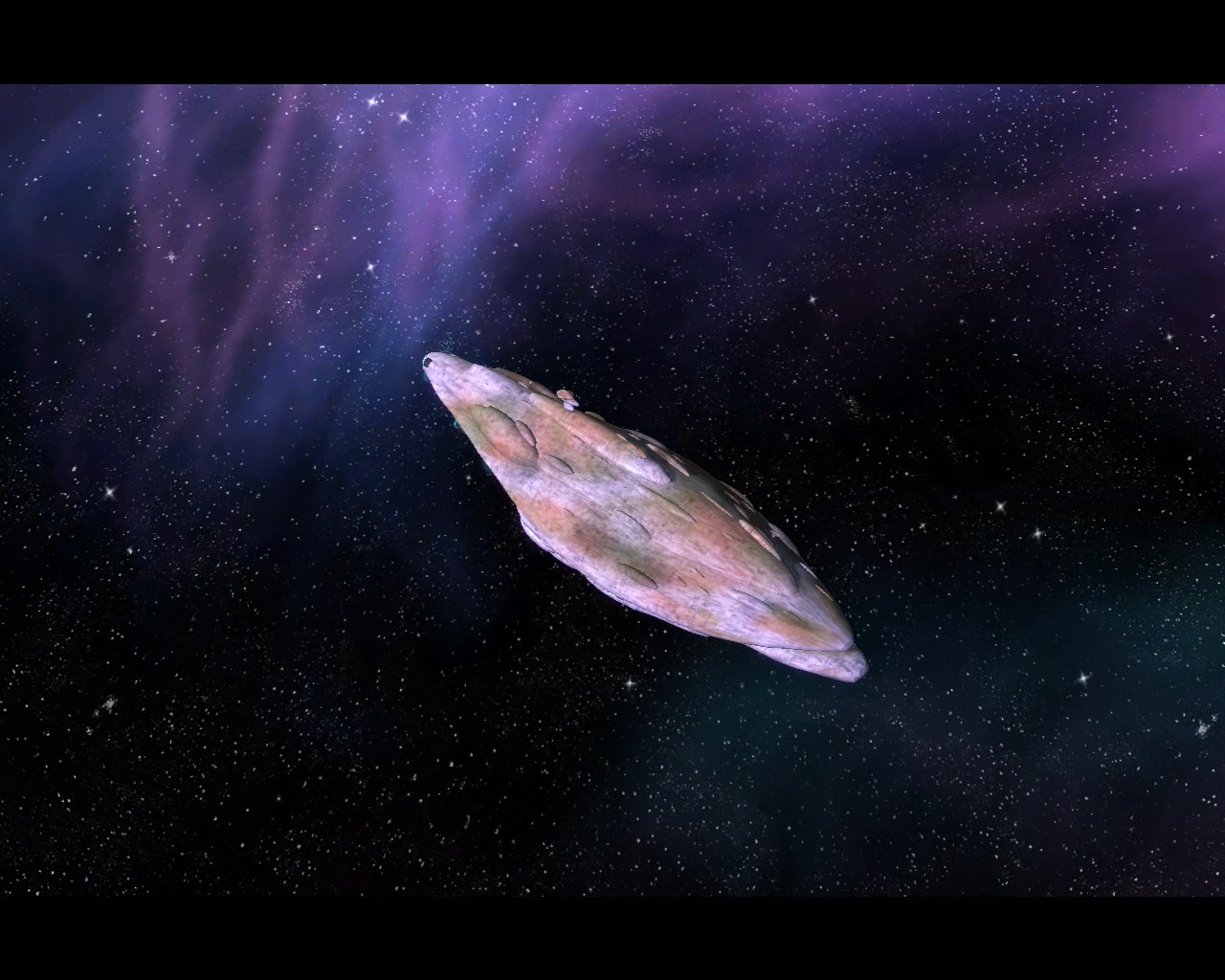 Viscount Star Defender - a hope to the galaxy.

The war with the Vongs caused enormous damage to the galaxy. It would seem that there is no reason to fight on the ruins, but over the years new conflicts, perpetrated by Lumiya and Abeloth, will lead the galaxy into a new chaos - the Second Galactic Civil War, followed by emergence of Lost Tribe of Sith.

We would also like to point out that Scenarios are planned for each era, and some of them, to properly portray the events, will be made into full Expansions with it's own features.

I would also like to say a few words about our new system of era changing in general scenarios. 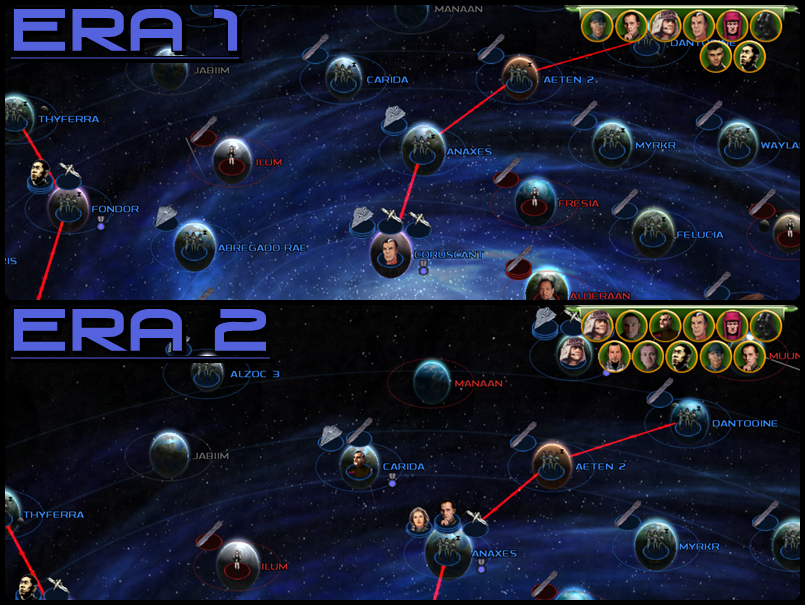 The vanilla tech levels are now called "eras", and replace each other depending on the time spent in the game. So, the longer you play in the Galactic Conquest, the further your era will move forward. This does not apply to story Scenarios, which take place in specific eras.

In skirmish, you are still forced to purchase the upgrade to a new era, but we are thinking about applying our new system too.

Thank you for reading and following us!

Dark Trooper phase 0, really nice idea! If i understood well, now eras are "random" and you don't have to spend money to improve your tech anymore.

Is the tech system supposed to be like ICW's?

Well that's neat. I don't think I've played a mod with a tech system like that before.

will the mod be placed in the steam workshop

We're thinking about this :)